The World of James Herriot museum in Thirsk, Yorkshire, England is introduced by his son Jim. James Herriot wrote 'All Creatures Great and Small' and other books about his life as a country vet.

23 Kirkgate in Thirsk was home to the world famous vet-cum-author James Herriot. Come to Thirsk and you can step back in time and experience the life of a vet and see what has made James Herriot into a global phenomenon. 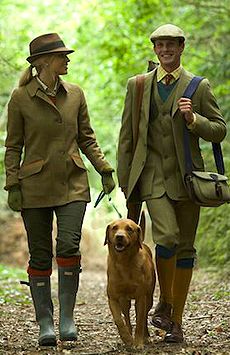 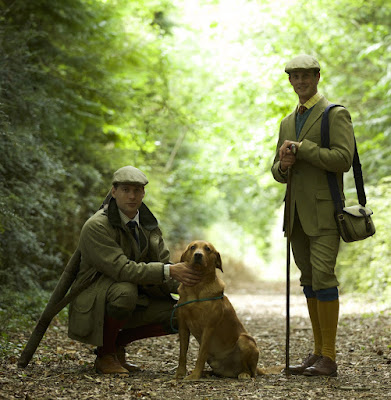 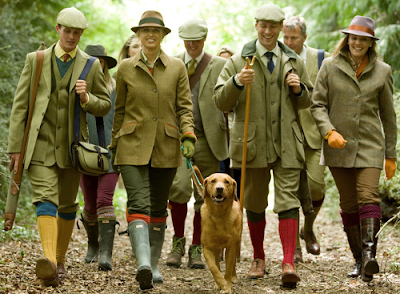 British country clothing or English country clothing is the traditional attire worn by men and women in rural Britain; it is the choice of clothing when taking part in outdoor sports such as equestrian pursuits, shooting, fishing and during general outdoor activity, such as walking, on picnics, and gardening. It is also worn at events such as horse races, country weddings, beer festivals and country fairs.

The form of dress although worn throughout Britain is mostly associated with England and is sometimes considered a historical form of dress or national costume, often worn to represent the English gentleman and lady. It is still considered countryside leisure wear and due to the durable, practical, comfortable and fashionable style, some people choose to use elements of country clothing for general usage in Britain.

During the 19th and early 20th centuries, what is regarded as traditional country clothing was a popular choice for wealthy people living in the British countryside as well as those who travelled there for leisure. Members of the British upper classes would go to the countryside for sporting events organized by the owners of English country houses if they did not own a country house themselves, and therefore they required practical and durable clothing. Today many of the original tailors who produced some of the first country style clothing still exist; and some have been granted a royal warrant; where it was once basic and usually just worn in the country, the popularity of the style has led to productions on the high street, as well as variations in the colours used as opposed to just natural.

Many elements of British country clothing have even been used by designers to develop styles which are suitable for everyday use; today people also choose to use elements of country clothing mixed with modern designs such as a tweed jacket with a denim trouser. It has also been influential in the development of preppy and Ivy League styles of dress in the United States and Canada.

The flat cap, Irish walking hat, deerstalker and trilby hat are some traditional forms of headwear used in the country. But some people will sometimes choose a non-traditional style of hat, depending on weather conditions, social circumstances and the activity. The flat cap is often made of tweed or cotton, whilst a trilby hat is traditionally made from felt material. For a trilby hat, a feather attached pin on the side is a traditional accessory for both men and women which can also optionally be attached a jacket lapel.

Footwear usually depends on the activity in which the wearer is taking part; the weather and conditions underfoot; and the social circumstances. Some of the most common forms of footwear are natural rubber wellington boots and leather country boots which protect the wearer from mud and water on the ground. When wearing a tweed suit, leather brogues are usually a choice of footwear; however, this also depends on the activity or event.

English country jackets usually include waxed and quilted jackets. The traditional style is dark olive green with a brown corduroy collar which is based on the original colour palette used when they were first produced, which also included navy as opposed to dark olive green. A gilet is also a popular style of country jacket.Tweed jackets and coats are also worn to protect against weather due to the durability of the material. Fleece jackets and gilets have also become part of country attire in Britain.

Tweed suits, normally consisting of a jacket, waistcoat and trousers (or skirt) have been an icon of the English country gentleman and lady since the 1840s when Catherine, Lady Dunmore began to provide for the British aristocracy and landed gentry; it soon proved popular as it provided a practical but also smart-casual style.[8] Today tweed suits remain popular, with some choosing the style for business as well as pleasure. However, people very rarely wear the full three piece when outdoors, usually only at events; the suit is traditionally worn with a Tattersall or Gingham shirt and optionally a tie or neck scarf for women. Some also choose to wear a knitwear sweater or jumper for warmth and to remain casual.

The popularity of country clothing surges periodically as a result of television period dramas such as Downton Abbey[citation needed] and the earlier All Creatures Great and Small, plus frequent photography releases of celebrities featured wearing the country style. This has included members of the British Royal Family, such as Queen Elizabeth II and The Prince of Wales, who wear traditional British country clothing when attending racing events and when at royal estates such as Balmoral and Highgrove. The boost in popularity has led to modernized variations of country clothing being produced to attract younger consumers; such designs - such as those by Dolce & Gabbana - have even taken inspiration from Queen Elizabeth II. Other designers, such as Ralph Lauren, have stated their love for country clothing and have based some of their designs on the style. In 2006, retailers in New York reported a boom in demand for the waxed country jacket featured by Dame Helen Mirren in her portrayal of Elizabeth II in The Queen (2006). More than a decade later, Barbour jackets remain popular clothing for inclement weather in the U.S., found in places as far removed from NYC as Chicago and North Carolina, which even has a Barbour rewaxing facility to support US customers. 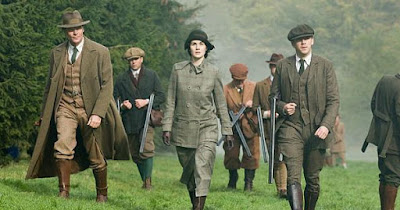 I always loved our family dogs and visited our beloved Melbourne vet regularly. So of course James Herriot on tv's The Yorkshire Vet was one of the best programmes for us to see. However I didn't think I would like the relative dark years of 1940s housing. The veterinary science exhibits were ok but the books and furniture for this important writer were very special indeed.

Dear Hels,
Thank you for your, as always, interesting comment and thank you for sharing, again, your interesting personal memories with us.
Greetings and ... keep safe!
JEEVES