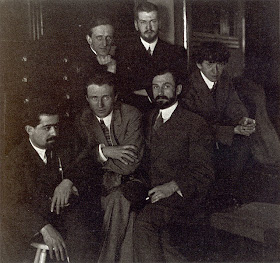 This is the only photograph I was able to find in my search in the Internet ...namely a group Photo of Young American Artists ( Wikipedia).The "blow up" of Laurence Fellows was made by the "blogger" Maxminimus, in Maxminimus.blogspot.
Young American Artists of the Modern School, L. to R. Jo Davidson, Edward Steichen, Arthur B. Carles, John Marin; back: Marsden Hartley, Laurence Fellows, c. 1911, Bates College Museum of Art 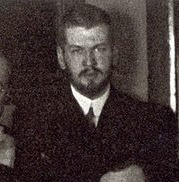 (1885 - 1964)
From the Gay Nineties up through the 1920s, American humor magazines played a greater social role than is generally appreciated. Their candor in recording the current events in a satirical weekly or monthly forum presented the contemporary American attitudes, prejudices, and mores in the guise of humor that was not found in the more sober mainstream periodicals. Publications such as Truth, Life, Puck, Leslie's, and Judge showcased the talents of such major illustrators as Charles Dana Gibson, James Montgomery Flagg, Orson Lowell, T.S. Sullivant, Peter Newell, Art Young, and many others who mirrored the country's foibles in their enthusiastic ridicule.

Joining the group in the early teens was an ultra sophisticated young artist named Laurence Fellows. A native of Pennsylvania, Fellows had received his training at the Philadelphia Academy of Art, with several follow-up years studying in England and in France at the Academie Julien under J.P. Laurens.

Upon his return to the United States, Fellows' fresh point of view, particularly reflecting a French/Vogue influence, found him a ready audience. His style was distinguished by a thin outline, flat tonality or color, with the emphasis on shapes rather than details. Just as quickly, however, he acquired many imitators. Before John Held, Jr., for instance, had invented his "flapper," he was clearly adapting much from Fellows' mannered drawing style into his own submitted gags. Other new converts were Hal Burroughs, Bertram Hartman, and Ralph Barton, who would each run with it in their own way. Fellows particularly liked to play with off-balanced compositions, even in the more conservative arena of illustration for advertising.

One of his early commercial clients was Kelly-Springfield Tires, which gave him the opportunity to combine his elegant draftsmanship with the clever, humorous copy depreciating the competition, thus often violating the rule against "negative" advertising. But Fellows' drawing and the copy had an edge of good humor that attracted a national following and the successful campaign lasted for many years.

In the thirties, Fellows gradually shifted his emphasis to fashion art, including both men and women, finding clients in Vanity Fair, Vogue, Cosmopolitan, The American Magazine, and McClure's. He also became a regular contributor to Apparel Arts magazine.

With only a limited number of men's fashion artists available, Fellows was most in demand for the male-focused subjects, particularly by the newly launched Esquire magazine in the thirties, where he was regularly featured in full-color spreads for many years.

Although Fellows considered himself a commercial illustrator, he was also a painter who exhibited periodically, later concentrating on abstractions. In reviewing his entire career, however, it is his early work, when he found a fresh viewpoint in a sophisticated spoof of the social upper crust, that makes us admire his audacity and leaves us with a smile of appreciation. 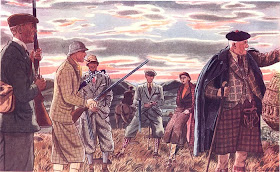 "Fellows was born in Ardmore, Pennsylvania in 1885. He was trained in illustration at the Pennsylvania Academy of Art, and honed his trademark “continental” style studying in England and France. But the real story begins when he returned to the States in the early 1910s and burst on the scene as an eager and talented young artist.
Fellows found work contributing to satirical magazines like Life and Leslie’s, and his European-influenced style was fresh and new, reflecting the sleekness and stylization that led to Art Deco. His work was so fresh, in fact, that he found many of his better-known contemporaries, including John Held, Jr. and Ralph Barton, were adapting his stylistic elements for their own use.
Fellows’ style during this period was very mannered and graphic, with thin black outlines enclosing flat expanses of tone and compositions that emphasized graphic weight and balance over fussy illustrative detail. His bread and butter throughout the 1920s was his work for the Kelly-Springfield Tire company. He brought an idea to the Kelly advertising manager for a series of magazine ads featuring “smart cars and smart types of people.” It was the beginning of an assignment that lasted for nearly a decade. The ads are still smart and fashionable today (and becoming collectible, by the way).
But it was in the 1930s that Fellows found the niche that would shape the lives of dandies for the next 80 years: fashion illustration. Though he contributed to Vanity Fair, McClure’s, and The American Magazine, among other publications, it was men’s fashion where he was most in demand, and Apparel Arts, aimed at the tailoring trade, and Esquire were his showcases.
Fellows’ technique as a fashion illustrator was more painterly and detailed than his earlier commercial work. The man could draw fabric, plain and simple. His fabric had weight, heft, drape, texture, and sheen. His flannels, worsteds, tweeds, and linens, his barathea and velvet and twill were all fabulous.
He also defined a very specific, very masculine world. Unlike today’s fashion magazines, Apparel Arts didn’t dictate fashion trends by using underfed models in unwearable suits. It showed what was already being worn by the well-heeled, trend-setting folk. Fellows’ genius as an illustrator lay in his ability to depict them in their everyday activities. Whether they were traveling the world, hosting dinner parties, hunting grouse, or just lounging around the penthouse or club, Fellows somehow made their rarified universe accessible. Ordinary folks could look at the illustrations and say, “I could wear that.”
Rather than looking overdressed and stuffy, or merely human shapes on which to hang clothes, Fellows’ subjects are men for whom dressing splendidly comes naturally. They’re having a good time, smiling, and enjoying themselves in their relaxed, party-filled sphere, and all of them are illustrations of casual, well-tailored elegance.
Laurence Fellows died in 1964, and in 2009 was named to the Society of Illustrators Hall of Fame. His immortality in the world of men’s fashion is assured simply because he had the ability to illustrate real men in their real lives and make those lives ones we all want to live." — BILL THOMPSON in Dandyisme.net 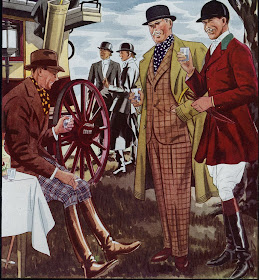 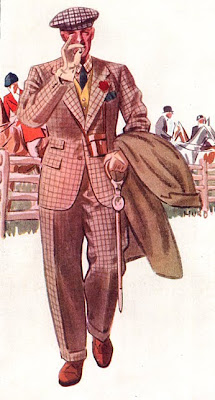 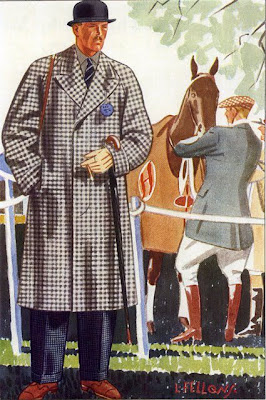 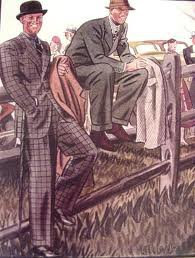 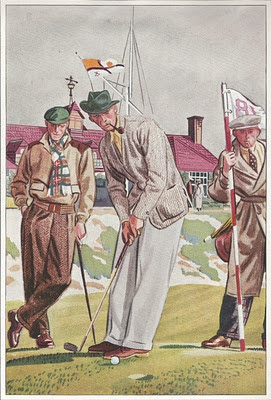 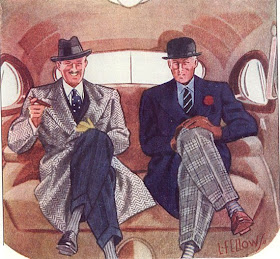 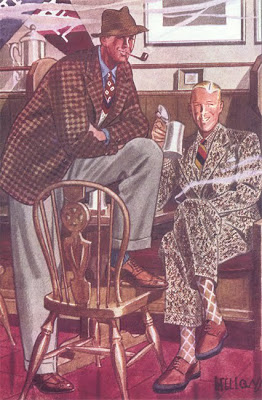 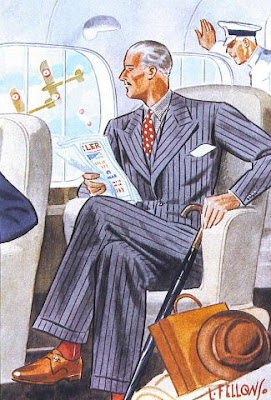 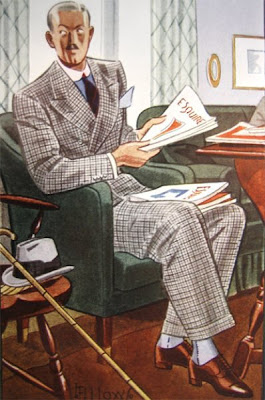 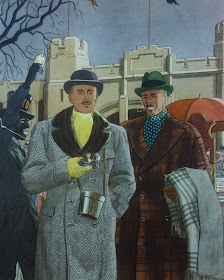 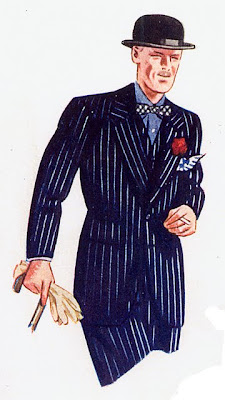 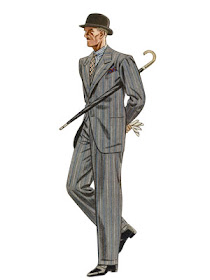