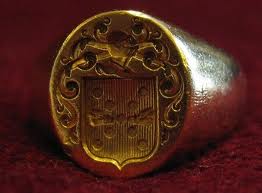 Signet rings, in recent times generally bearing a coat of arms, are made by intaglio engraving, either in metal or engraved gems (generally semiprecious). Agate is a frequent material, especially carnelian or banded agate like sardonyx; the banding make the impression contrast with the ground. Most classical engraved gems were originally worn as signet rings.
Metal signet rings can also be cast, which is cheaper but yields a weaker material.
The wearing of signet rings (from Latin "signum" meaning sign) goes back to ancient Egypt; the distinctive personal signature was not developed in antiquity and most documents needed a seal. The tradition continues, especially among the armigerous, in European and some other cultures.
Because it is used to attest the authority of its bearer, the ring has also been seen as a symbol of his power, which is one explanation for its inclusion in the regalia of certain monarchies. After the death of a Pope, the destruction of his signet ring is a prescribed act clearing the way for the sede vacante and subsequent election of a new Pope.
Signet rings are also used as souvenir or membership attribute, e.g. class ring (typically bear the coat of arms or crest of the school), as an alternative to one with a stone.
The wearing of a signet ring is declining as the European aristocracy diminishes, however noble families have upheld long standing traditions of wearing signet rings for centuries. Sometimes the initials of the individual are engraved into the ring if the person is not of noble descent and does not have the right to bear arms.
Since at least the 16th century there have also been pseudo-signet rings where the engraving is not reversed. 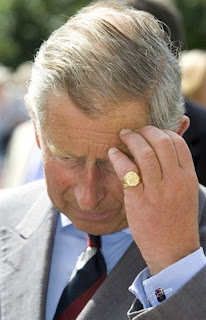 In the heraldic traditions of England and Scotland an individual, rather than a family, had a coat of arms. In those traditions coats of arms are legal property transmitted from father to son; wives and daughters could also bear arms modified to indicate their relation to the current holder of the arms. Undifferenced arms are used only by one person at any given time. Other descendants of the original bearer could bear the ancestral arms only with some difference: usually a color change or the addition of a distinguishing charge. One such charge is the label, which in British usage (outside the Royal Family) is now always the mark of an heir apparent or (in Scotland) an heir presumptive.
Because of their importance in identification, particularly in seals on legal documents, the use of arms was strictly regulated; few countries continue in this today. This has been carried out by heralds and the study of coats of arms is therefore called "heraldry". Some other traditions (e.g., Polish heraldry) are less restrictive — allowing, for example, all members of a dynastic house or family to use the same arms, although one or more elements may be reserved to the head of the house.
In time, the use of arms spread from military entities to educational institutes, and other establishments.According to a design institute article, "The modern logo and corporate livery have evolved from the battle standard and military uniform of medieval times".
In his book, The Visual Culture of Violence in the Late Middle Ages, Valentin Groebner argues that the images composed on coats of arms are in many cases designed to convey a feeling of power and strength, often in military terms. The author Helen Stuart argues that some coats of arms were a form of corporate logo. Museums on medieval armory also point out that as emblems they may be viewed as precursors to the corporate logos of modern society, used for group identity formation.
When knights were so encased in armour that no means of identifying them was left, the practice was introduced of painting their insignia of honour on their shield as an easy method of distinguishing them. Originally these were granted only to individuals, but were afterward made hereditary in England by King Richard I, during his crusade to Palestine. 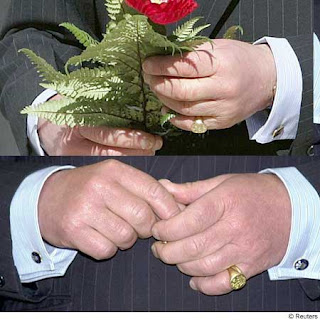 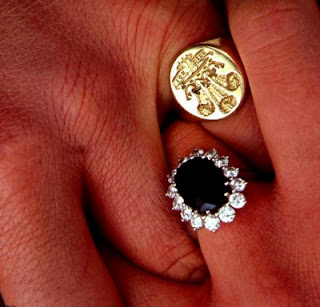 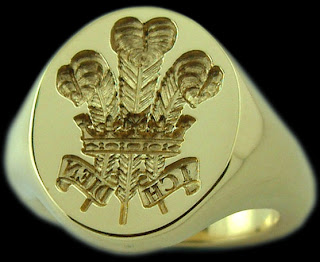 Plume of three ostrich feathers, as depicted on the signet ring of HRH Prince Charles, Prince of Wales 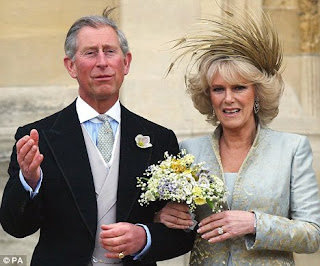 Prince Charles wears a wedding ring under a signet ring on the little finger of his left hand given to him by the Duchess of Cornwall, who he married in 2005

Charles wore the wedding band under the signet ring, which carries his "crest," before he married Camilla, and after the death of Diana. I'd assumed it was his wedding ring from his first marriage.