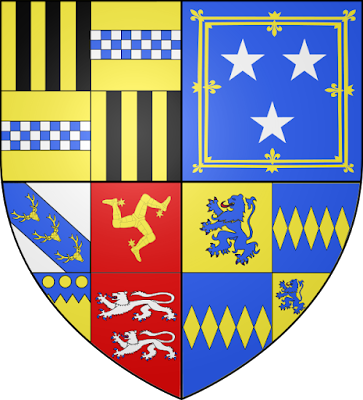 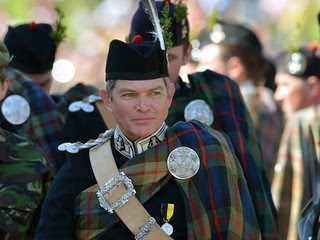 12th Duke of Atholl
As Duke of Atholl, he has the right to raise Europe's only legal private army, named the Atholl Highlanders (a unique privilege granted to his family by Queen Victoria after visiting Blair Atholl in 1844). 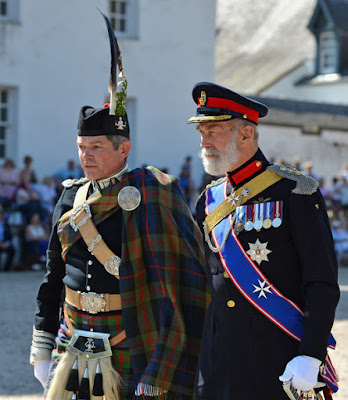 Bruce George Ronald Murray, 12th Duke of Atholl (born 6 April 1960) is a South African-born hereditary peer in the Peerage of Scotland and Chief of Clan Murray. As Duke of Atholl, he has the right to raise Europe's only legal private army, named the Atholl Highlanders (a unique privilege granted to his family by Queen Victoria after visiting Blair Atholl in 1844).

The elder son of John Murray, 11th Duke of Atholl and Margaret Yvonne née Leach (now styled the Dowager Duchess of Atholl), matriculated at Jeppe High School for Boys Johannesburg in 1979. He was educated at Saasveld Forestry College before serving his two years' National Service with the South African Infantry Corps.He is currently a volunteer member of the Transvaal Scottish Regiment, holding the rank of Lieutenant. Previously he managed a tea plantation, but then ran a signage business producing signs for commercial buildings. He was commissioned into the Atholl Highlanders in 2000, being appointed as Lieutenant Colonel. Upon the death of his father on 15 May 2012, he succeeded to all his father's titles, becoming the 12th Duke of Atholl.

The Duke first married on 4 February 1984 at Johannesburg Lynne Elizabeth Andrew (born Johannesburg, 7 June 1963) and they divorced in 2003.

Together they had three children, two sons and one daughter: 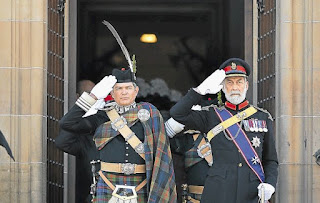 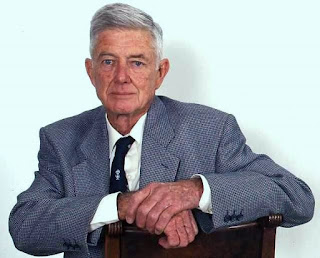 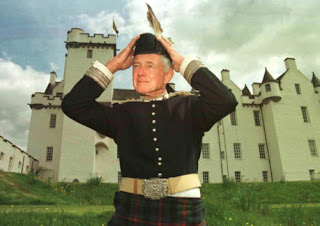 John Murray, 11th Duke of Atholl (19 January 1929 – 15 May 2012) was a South African-born hereditary peer of the Peerage of Scotland, hereditary Clan Chief of Clan Murray, and Colonel-in-Chief of the Atholl Highlanders. As Duke of Atholl, he commanded the only legal private army in Europe.

The Duke was born in Johannesburg, South Africa, as the only child of Major George Murray (1884–1940) and Joan (d. 2000), the daughter of William Edward Eastwood, of South Africa. They were married on 17 January 1928. His father was killed on active service in the Second World War.

He graduated with a Bachelor of Science degree in Engineering from the University of the Witwatersrand, a leading South African University.

After taking his degree, Murray worked as a land surveyor.

Bruce Murray, now 12th Duke of Atholl (born 6 April 1960), who was educated at Saasveld Forestry College and in 1984 married Lynne Elizabeth Andrew, the first daughter of Nicholas Andrew, of Bedfordview, South Africa. They have three children:

Michael Bruce John Murray, Marquess of Tullibardine (born 5 March 1985), who is a sports science student at the University of Pretoria. The 12th Duke lives in South Africa and is a volunteer member of the South African Defence Force (Transvaal Scottish Regiment) as well as an officer of the Atholl Highlanders.;
Lord David Nicholas George Murray (born 31 January 1986); and
Lady Nicole Murray (born 11 July 1987), who is married to Peter Piek.
Lord Craig John Murray (born 1963), who in 1988 married Inge Bakker, the second daughter of Auke Bakker, of Bedfordview, South Africa. They have two children:
Carl Murray (born 1993) and
Shona Murray (born 1995).
On the death of his kinsman George Murray, 10th Duke of Atholl, Murray succeeded as 11th Duke. However, the day before the death of the 10th Duke, it was announced that he had given his ancestral seat of Blair Castle and most of his estates to a charitable trust, thus effectively disinheriting his heir. He had been unimpressed when his heir had indicated he had no desire to leave South Africa for Scotland. The new Duke thus inherited little but the titles and the right to raise a private army.

Atholl continued to live in South Africa, while making annual visits to Scotland. He died on 15 May 2012 in a South African hospital at the age of 83. He was succeeded in his titles by his elder son, Bruce Murray, Marquess of Tullibardine. 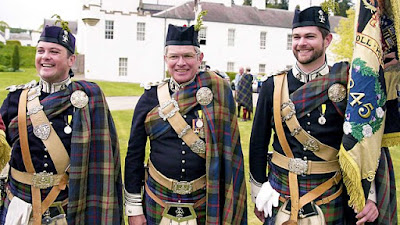 Dukedoms are created by the monarch for reasons ranging from a grateful nation rewarding a major war leader to a king acknowledging his illegitimate son. The last dukedom to be created was by Queen Victoria. As they gradually become extinct, what will become of those that remain? Do they still have power and wealth? What is it to be a duke in the 21st century?

Answers come from a surprising variety of extraordinary characters - the Duke of Marlborough and his aunt, born Lady Rosemary Spencer-Churchill, who remembers being brought up in Blenheim Palace with 36 indoor servants, and the Duke of Atholl, who until 2012 was a rural South African sign-maker called Bruce Murray - on succeeding to the dukedom he now heads the only private army in Europe - the Atholl Highlanders.

The Duke of Montrose is a Scottish hill farmer and a politician, one of the few dukes who still sit in the House of Lords. The Duchess of Rutland made dozens of people redundant when she took over Belvoir Castle, but is determined to make it an efficient business.

The Duke and Duchess of St Albans don't have a stately pile, but do have their coronets and coronation robes. The duke's heir Charles Beauclerk is fascinated by the history of mental illness in the family. And if Camilla Osborne had been a boy, she would have become the 11th Duke of Leeds. But she wasn't and the dukedom is now extinct. Where does that leave her?
http://www.bbc.co.uk/programmes/b06mvy6r 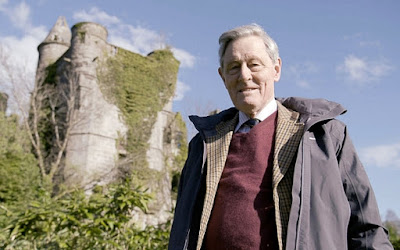 The decline of the English aristocracy is a current TV obsession. Downton Abbey has spent much of its swansong series frothing about it. Modern Times: The Last Dukes took a more contemporary view, exploring the 21st-century lives of members of the nobility’s highest rank below royalty and their imminent “extinction”.

Things got off to a somewhat predictable start with a peek at the splendours of Blenheim Palace, seat of the dukes of Marlborough since 1722. Lady Rosemary Spencer-Churchill recalled how being a duke’s daughter put her “top of the pile” to be a maid of honour at the Queen’s coronation in 1953. And how she and her parents had never even spoken of it because, in those days, one “had lots of very grand things that happened all the time”. How times have changed.

Bruce Murray’s experience was rather different. Until recently a sign-maker from an “obscure provincial town” in South Africa, in 2012 he inherited the title of 12th Duke of Atholl, along with a private army and an obligation to dress up in a kilt at Blair Castle once a year.
Strangely, the vexed question of primogeniture – dukedoms can only be passed down through the male line – didn’t ruffle many feathers in Michael Waldman’s film. The three daughters of the Duke of Rutland, for instance, were perfectly content that their younger brother Charles would inherit everything, including the stunning Belvoir Castle.

The Duchess of Rutland and her daughters Lady Eliza Manners, Lady Alice Manners and Lady Violet Manners (Photo: BBC/Spun Gold TV)
In the meantime the other dukes featured – of Montrose, St Albans and Marlborough – all seemed to be perfectly content with their lot. And while perhaps not rolling in the vast wealth and grandeur they might once have considered a birthright, they didn’t seem to be doing too badly. Curiously no mention was made of the thriving Duke of Westminster, one of the UK’s wealthiest landowners.

The 8th Duke of Montrose, in Robes for State Opening of Parliament in his House of Lords Office (Photo: BBC/Spun Gold TV)
As such, charming and fascinating as these glimpses into the still-privileged lives of others were, the film’s dogged insistence that British dukes were “a dying breed” did feel over-egged. At the outset we learnt that in 1953 there were 28 non-royal dukes. Now, 62 years on, there are 24. At that rate of attrition it could take centuries for the rank to die out. Rumours of extinction, one couldn’t help feeling, were greatly exaggerated. 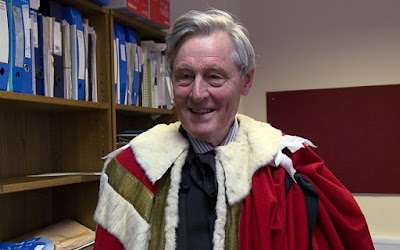 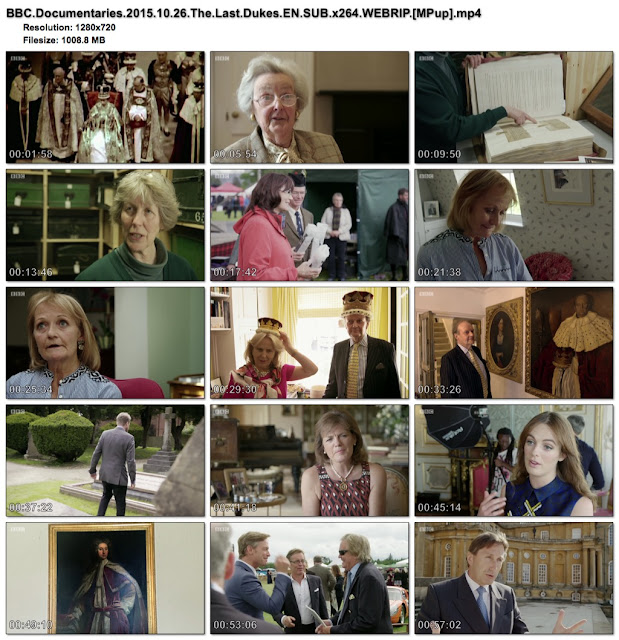