Our last meeting and interview with the great man, Robert Hardy CBE FSA // Cahillane remembers ‘All Creatures Great and Small’ 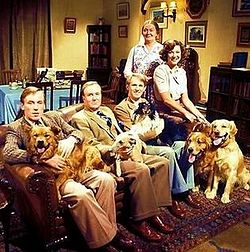 Recently, we’ve been watching “The Yorkshire Vet” on Acorn TV. Skeldale Veterinary Centre is a fine successor to that run by Alf Wight (known by the pen James Herriot).

The new show’s vets are Julian Norton and his partner Peter Wright, who trained under Wight. In a respectful choice of casting, the new show’s narrator is actor Christopher Timothy who played Herriot in the series, “All Creatures Great and Small.” This new practice is more of a documentary than Herriot’s, which can cause a few winces in the watching.

Herriot’s dog stories and other books about life in the Yorkshire Dales have sold in the millions. Starting in 1978, through 1990, 90 episodes of “All Creatures Great and Small” became a Sunday night television staple in our house.

In 2007 we exercised our love for the show to the max and booked a holiday week in Askrigg, a Yorkshire village in the heart of Herriot country. Our two-bed apartment was at the rear of The King’s Arms public house. It was called The Drovers in the “All Creatures” scripts and we found a welcome there. Its wall featured photos of Christopher Timothy, Robert Hardy and Peter Davison enjoying a pint of Yorkshire bitter, which isn’t how it tastes.

In the opening scenes, Herriot arrives in Yorkshire fresh from college in Glasgow. He was to be apprentice vet to Farnon, a demanding boss with the softest of hearts. His calling-card saying was “You must attend!” reminding me of my Irish father who famously wanted everything done yesterday. As a country vet, Farnon’s guiding rule was that when the phone rang he responded. Soon his apprentice, James, shared that load.

I, Maureen, son Matt and his wife Karen walked in the footsteps of that famous vet and his television family of true-to-life professionals and country folk. We had lived inside so many “All Creatures” shows that we felt a kinship with the actors, their realistic characters, and the unchanging sheep-filled Dales.

Herriot wrote truth about his fellow workers, his love life, animals encountered, and how tight-fisted farmers tested his patience. His first novels were “If Only They Could Talk,” and “It Shouldn’t Happen to a Vet.” The book’s stories were slice-of-life tales that transferred easily to the small screen.

Nonetheless, Hardy had doubts about the show’s appeal. He worried that it would “bore the townspeople and irritate the country folk.” Hardy’s analysis turned out to be spectacularly wrong, but his opinion made sense. Early on in his career, Hardy performed in Shakespeare’s “Henry V” at Stratford-upon-Avon.

It became easier and easier to care about each character in “All Creatures Great and Small.” Young James Herriot learned how to navigate Yorkshire farmers and their singular personalities.

One, Mr. Biggins, would corral James in the pub and try to get free vet advice rather than pay for an official visit. In one scene he had the whole pub smiling at his demonstration of an odd hitch in a cow’s back leg. The camera took lingering views of the farmer’s rear end, as a smiling James asked for repeat performances.

James drove up and down the hilly stonewalled roads that we tackled 10 years ago. The actors drove a succession of cranky vintage vehicles in order to match the 1930s and onward settings. In lambing season the vets might find themselves in a cold shed as spring snows quieted the scene around them.

In Acorn’s modern version, Peter Wright says of a new lamb nestling up to its mother, “After 35 years I still think that what’s life is all about.”

During the show’s run James Herriot had two actress wives. Carol Drinkwater was unaware that her part as Helen, a farmer’s daughter and James’s girlfriend, had turned her into a sex symbol until she was mobbed wherever she appeared. Before James got around to asking for her hand, Siegfried told him not to wait. Helen, he observed, nearly stopped traffic just by walking in the town.

James had rich competition from an upscale young man who drove a beautiful car and chased Helen about. The broad humor of difficult courtships found James a bit worse for drink at a dance as her boyfriend looked down his nose at a floored James while Helen laughed. In vino veritas, so they say, but all came well.

Their unique honeymoon saw James testing cows across the Dales even as he was showing off his new spouse to kind farmers’ wives. Helen was one of them.

The show was once critiqued as a “cup of cocoa drama,” meaning it’s the perfect nightcap leading to a good night’s sleep. Compared to far too much of today’s television entertainment, watching “All Creatures” I never had occasion to moan or throw objects at the TV screen because of language “that would make a sailor blush” to quote Professor Higgins in “My Fair Lady.”

Robert Hardy passed away last month at age 92. Like most of us he played many roles in life. Siegfried Farnon, was just one. In six films he was Winston Churchill!

Yet, in his obituary his canny, often grouchy vet was held out to be his legacy. The good news is that “All Creatures” lives on in colorful bucolic videos borrowed from a local library, seen on YouTube or purchased from a bookstore.

In these harrowing times, being vetted as “a cup of cocoa” is praise indeed. May Robert Hardy rest in peace and may a godlike Siegfried Farnon continue caring for animals — like and unlike us — for eternity. Amen.

Jim Cahillane, who writes a monthly column, lives in Williamsburg with creatures wild and domestic, including Liddy, a fairly odd cat. 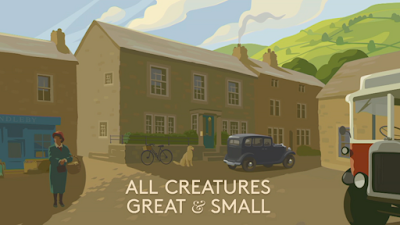 THE "NEW" ALL CREATURES GREAT AND SMALL // CHANNEL 5 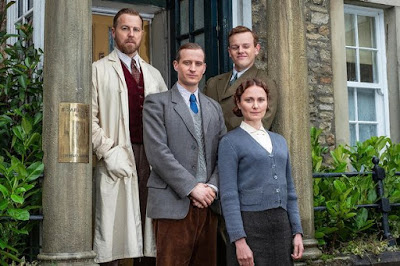