The voice of the countryside

Country Life, the quintessential English magazine, is undoubtedly one of the biggest and instantly recognisable brands in the UK today. The magazine comments in depth on a wide variety of subjects, such as architecture, property, the arts, gardens and gardening, the countryside, schools and wildlife. This eclectic editorial mix, combined with stunning photography and high-end property advertising ensures that week after week, Country Life is read by people who live the real country house lifestyle. Countrylife.co.uk brings over 100 years of editorial and commercial excellence to the web and is one of the best and most enjoyable places to browse for luxury property for sale online. The site also showcases the best of the editorial from Country Life magazine as well as carrying its own exclusive online content covering rural news, seasonal recipes and countryside events.
http://www.countrylife.co.uk/publication/country-life 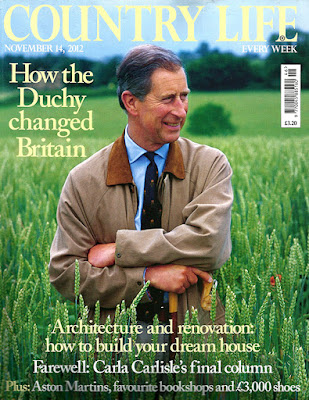 Country Life was launched in 1897, incorporating Racing Illustrated. At this time it was owned by Edward Hudson, the owner of Lindisfarne Castle and various Lutyens-designed houses including The Deanery in Sonning.

At that time golf and racing served as its main content, as well as the property coverage, initially of manorial estates, which is still such a large part of the magazine. Elizabeth Bowes-Lyon, the late Queen Mother, used to appear frequently on its front cover. Now the magazine covers a range of subjects in depth, from gardens and gardening to country house architecture, fine art and books, and property to rural issues, luxury products and interiors.

The frontispiece of each issue usually features a portrait photograph of a young woman of society, or, on occasion, a man of society: Princes William and Harry have both been frontispieces in recent years.

In 2016, in its 119th year, Country Life was the subject of a three-part documentary series made by Spun Gold and which aired on BBC Two on consecutive Friday nights in March. The magazine has also celebrated its best-ever selling issue - the double issue from Christmas 2015 - and a 6th ABC increase in a row, which is an achievement no other weekly magazine publishing original content can claim.

In 1997, the centenary of the magazine was celebrated by a special issue, the publishing of a book by Sir Roy Strong, the airing of a BBC2 TV programme on a year in the life of the magazine, and staging a Gold Medal winning garden at the Chelsea Flower Show. In 1999, the magazine launched a new website.

In 2007, the magazine celebrated its 110th anniversary with a special souvenir issue on 4 January.[4] Starting on Wednesday 7 May 2008 the magazine is issued each Wednesday, having been on sale each Thursday for the past 111 years, with the earlier day being achieved using electronic publishing technology.

The first several dozen pages of each issue are devoted to colour advertisements for upmarket residential property, which are one of the best known attractions of the magazine, and popular with everyone from the super rich looking for a country house or estate to those who can only aspire to own such a property.

The magazine covers the pleasures and joys of rural life. It is primarily concerned with rural communities and their environments as well as the concerns of country dwellers and landowners and has a diverse readership which, although mainly UK based is also international. Much of its success has historically been built on its coverage of country house architecture and gardening at a time when the architectural press largely ignored this building type. An extensive photographic archive has resulted, now of great importance to architectural historians.

The other rural pursuits and interests covered include hunting, shooting, farming, equestrian news and gardening and there are regular news and opinion pieces as well as a firm engagement with rural politics. There are reviews of books, food and wine, art and architecture (also many offers) and antiques and crafts. Illustrative material includes the Tottering-by-Gently cartoon by Annie Tempest. The property section claims to have more prime agents than anywhere else. In addition. monthly luxury and interiors sections offer readers some informed ideas about the latest in jewellery, style and travel, and interiors.

Recent feature articles have included Charles, Prince of Wales guest-editing an issue of Country Life in 2013, an historic revelation which revealed the true face of Shakespeare for the first time in 2015, and in 2016 an exclusive on where the Great Fire of London really began in 1666. Upcoming are a special commemorative issue in June 2016 on the occasion of the Queen's 90th birthday, and a Best of Britain celebrating the very best of what the United Kingdom has to offer, from craftsmen to landscapes.