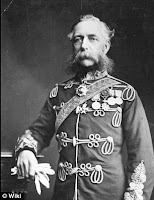 The Charge of the Light Brigade was a charge of British light cavalry led by Lord Cardigan against Russian forces during the Battle of Balaclava on 25 October 1854 in the Crimean War. Lord Raglan, overall commander of the British forces, had intended to send the Light Brigade to prevent the Russians from removing captured guns from overrun Turkish positions, a task well-suited to light cavalry.
However, there was miscommunication in the chain of command, and the Light Brigade was instead sent on a frontal assault against a different artillery battery, one well-prepared with excellent fields of defensive fire. They reached the battery under withering direct fire and scattered some of the gunners, but they were forced to retreat immediately. Thus, the assault ended with very high British casualties and no decisive gains.
The events are best remembered as the subject of Alfred, Lord Tennyson's narrative poem "The Charge of the Light Brigade" (1854), published just six weeks after the event. Its lines emphasise the valour of the cavalry in bravely carrying out their orders, regardless of the obvious outcome. Blame for the miscommunication has remained controversial, as the original order itself was vague, and the officer who delivered the written orders with some verbal interpretation died in the first minute of the assault. 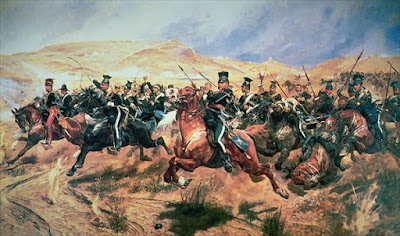 The charge was made by the Light Brigade of the British cavalry, which consisted of the 4th and 13th Light Dragoons, 17th Lancers, and the 8th and 11th Hussars, under the command of Major General James Brudenell, 7th Earl of Cardigan. Also present that day was the Heavy Brigade, commanded by Major General James Yorke Scarlett, who was a past Commanding Officer of the 5th Dragoon Guards. The Heavy Brigade was made up of the 4th Royal Irish Dragoon Guards, the 5th Dragoon Guards, the 6th Inniskilling Dragoons and the Scots Greys. The two brigades were the only British cavalry force at the battle.

The Light Brigade, as the name suggests, were the British light cavalry force. It mounted light, fast horses which were unarmoured. The men were armed with lances and sabres. Optimized for maximum mobility and speed, they were intended for reconnaissance and skirmishing. They were also ideal for cutting down infantry and artillery units as they attempted to retreat.

The Heavy Brigade under James Scarlett was the British heavy cavalry force. It mounted large, heavy chargers. The men were equipped with metal helmets and armed with cavalry swords for close combat. They were intended as the primary British shock force, leading frontal charges in order to break enemy lines. 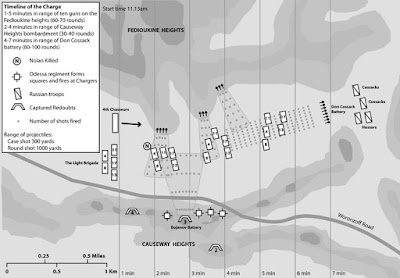 Overall command of the British cavalry resided with Lieutenant General George Bingham, 3rd Earl of Lucan. Cardigan and Lucan were brothers-in-law who disliked each other intensely. Lucan received an order from the army commander Lord Raglan stating: "Lord Raglan wishes the cavalry to advance rapidly to the front, follow the enemy, and try to prevent the enemy carrying away the guns. Troop horse artillery may accompany. French cavalry is on your left. Immediate." Raglan wanted the light cavalry to prevent the Russians from successfully withdrawing the naval guns from the redoubts they had captured on the reverse side of the Causeway Heights, the hill forming the south side of the valley. This was an optimum task for the Light Brigade, as their superior speed would ensure the Russians would be forced to either quickly abandon the cumbersome guns or be cut down en masse while they attempted to flee with them.

Raglan could see what was happening from his high vantage point on the west side of the valley. However, the lie of the land around Lucan and the cavalry prevented him from seeing the Russians' efforts to remove the guns from the redoubts and retreat.

The order was drafted by Brigadier Richard Airey and carried by Captain Louis Edward Nolan. Nolan carried the further oral instruction that the cavalry was to attack immediately. When Lucan asked what guns were referred to, Nolan is said to have indicated with a wide sweep of his arm—not the causeway redoubts—but the mass of Russian guns in a redoubt at the end of the valley, around a mile away. His reasons for the misdirection are unknown because he was killed in the ensuing battle.

In response to the order, Lucan instructed Cardigan to lead his command of about 670 troopers of the Light Brigade straight into the valley between the Fedyukhin Heights and the Causeway Heights. In his poem, "The Charge of the Light Brigade" (1854), Tennyson famously dubbed this hollow "The Valley of Death".

The opposing Russian forces were commanded by Pavel Liprandi and included approximately 20 battalions of infantry supported by over 50 artillery pieces. These forces were deployed on both sides and at the opposite end of the valley.

Lucan himself was to follow with the Heavy Brigade. Although the Heavy Brigade was better armoured and intended for frontal assaults on infantry positions, neither force was remotely equipped for a frontal assault on a fully dug-in and alerted artillery battery—much less one with an excellent line of sight over a mile in length and supported on two sides by artillery batteries providing enfilading fire from elevated ground. The semi-suicidal nature of this charge was surely evident to the troopers of the Light Brigade, but if there were any objection to the orders, it was not recorded.

A newspaper report on 11 December 2016 revealed another version of what happened: "More than 160 years on" (i.e. after 2014) a letter was found in the British Library, written by Lieutenant Frederick Maxse, who was on Lord Raglan's staff at Balaklava. It said that Lord Raglan had sent an order for the Light Brigade to "follow the enemy and try to prevent the enemy from carrying away the guns"; those guns were some British artillery guns which were at risk. Raglan sent the order via 36-year-old Captain Louis Nolan (old drawing of him). Nolan, instead of passing on the order verbatim complete as given, passed it on to Lord Lucan orally as "There, my lord, is your enemy! There are your guns!", and added the word "attack" when Raglan had intended merely a show of force. Nolan's version of the order and accompanying gesture were misunderstood, causing the disaster described above. Nolan rode with the charge and died in it. Maxse's letter said that Nolan was annoyed at how little the Light Brigade had done previously and that Nolan was angry against Lord Lucan. Nigel Kingscote (another of Raglan's staff officers) agreed that the fault was Nolan's, and said that Nolan, if he had lived, would have been "broke by court martial". 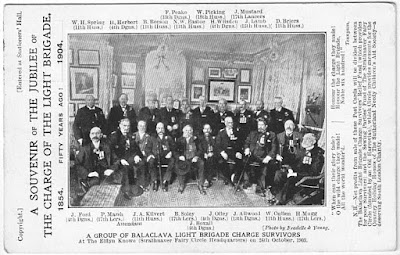