BBC FOUR: ART, PASSION & POWER: THE STORY OF THE ROYAL COLLECTION
Forty years since the story of the Royal Collection was last told so extensively on television, a four-part series for BBC Four brings the many treasures of the Collection to television.  Andrew Graham-Dixon selects some of the most spectacular works of art, as well as some of the lesser-known objects, as he visits royal residences, museums and galleries across the UK. 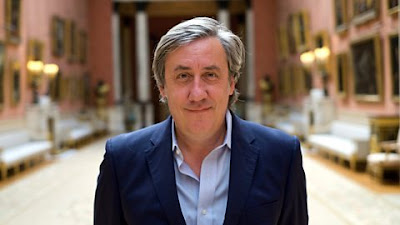 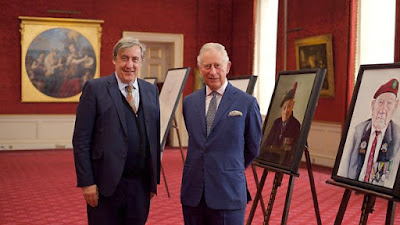 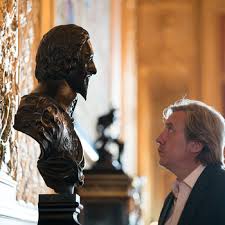 TV Review: Art, Passion and Power: The Story of the Royal Collection (BBC4)
Sean O'Grady is intrigued by Andrew Graham-Dixon's account of a remarkable gathering of works

Art isn’t stats, but the cannonball numbers propelled towards the viewer by Andrew Graham-Dixon in the latest instalment in his survey of the Royal Collection were as impactful as any of the magnificent works we were allowed a glimpse of. The Collection, for example, contains the world’s largest gathering of Canalettos (50 or so); the world’s greatest collection of drawings by Leonardo da Vinci (say 600); and the heaviest mobile work of art in this country, if not the world, the Gold State Coach. This four-tonner was completed in 1762, and the Queen recently gave poor marks to it in her (belated) report of her 1953 road test. Ride quality, very poor indeed; craftsmanship of gilded tritons and golden mutts – peerless.

Even with a focus on judiciously chosen episodes and works it was, in reality, and even on the small screen, all too much to take in. That is hardly Graham-Dixon’s fault; it is the nature of the beast, that beast being the astonishingly varied and magnificent collection of art and furniture displayed across palaces and stately houses that are themselves works of fine architecture (mostly). It might well be the greatest such collection since the ancients.

I won’t labour the point, but I have to mention that it is, despite some public viewings and loans to collections, an essentially private affair, the property of one person, the Queen, by hereditary right. This, I think, radically devalues its worth to the nation. Ask yourself, for example, what was the last time you actually saw Vermeer’s 1662 masterpiece A Lady at the Virginal with a Gentleman. Or the silver furniture commissioned to rival Louis XIV’s Versailles? Or the Mogul-era paintings so fine they say the brushstrokes were rendered using the hairs of a kitten?

Not every monarch was an enlightened patron of the arts. George II, for instance, his words rendered with a hammy German accent by Graham-Dixon is reputed to have remarked that “I hate art and I hate poetry”, though one exception would seem to be the not-very-good painting of a “Fat Venus” that he had a bit of a Hanoverian crush on.

By contrast, Charles II, by instinct an absolutist, was determined to restore the Royal Collection as much as he was the throne itself, much of it having been sold off or melted down during England's brief experiment with Republicanism under Oliver Cromwell. Charles’s coronation portrait, complete with new crown, new sceptre and new orb shows him face on, staring down anyone who cared to gaze up at his countenance, his spindly legs “manspreading” across the canvas. Quite a divine sight of kings, you might say.

Charles II, by the way, also seems to have been a bit of a Harvey Weinstein of his time. The long gallery of portraits of the “Windsor Beauties” by Sir Peter Lely are a testament to his taste, libertine ways and (abuse of) power, their eyes suggesting a post-regal-coital state of contentment. Except for one, that is: Francis Stuart, Duchess of Richmond. At the age of 15 she was introduced to the court of Charles II and he became obsessed with her, which put her in a predicament. In the words of our narrator: “Imagine having to rebuff the advances of a lecherous king in a greased periwig.” She never, to her great credit, became the king’s mistress. An early hero of #MeToo, right there.

Given where the UK’s national finances seem to be heading right now this might be a good moment for Philip Hammond to get all this stuff valued, if only for insurance purposes, as they say on the Antiques Roadshow. It would make a substantial inroad into the national debt. As I say, given that most of us never get to see any of the Collection, you’d have to ask yourself if you’d miss them.

I’m not ashamed to admit that I was terrified by the end of the latest Inside No. 9 playlet. The story of a long-married couple trying to save what was left of their 20-year marriage was poignant and difficult enough to watch anyway. Harriet (Nicola Walker) trying, for example, role play as sexy “Nurse Honeypot and her magic fingers” on her bored and boring husband Adrian (Steve Pemberton), was an exquisitely embarrassing and funny scene, as is so much of Inside No. 9. Nothing, though, prepared the viewer for the rapid denouement. In the final few minutes, with magnificent economy of direction and dialogue, was revealed the darkest of dark secrets in professional wedding photographer Adrian’s basement dark room. For Adrian had been keeping, Josef Fritzl-style, their Polish cleaner (Agnes, Magdalena Kurek) and her son, we suppose fathered by Adrian,  locked up and fed on Pot Noodles for the past nine years: but, after a failed suicide attempt, was then himself incarcerated in that same cell, to be fed on Pot Noodles and chained to a wall indefinitely. Worst of all, we felt as though he deserved it. To be drawn into such dark thoughts was a deeply disquieting experience. Never has comedy been so grotesque. 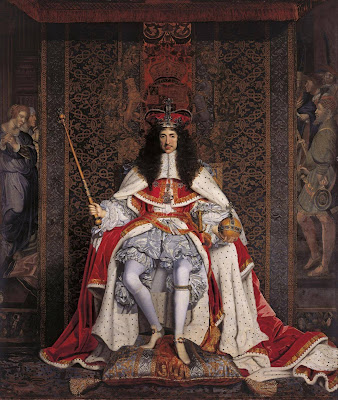 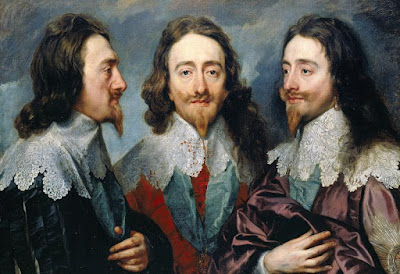 Charles II: Art and Power review – crowning glories of a royal passion
Queen’s Gallery, London
Portraits depicted him as a grotesque figure but the king loved art and amassed a magnificent array of works that celebrate his love of theatre – and Nell Gwyn

Stage villain … detail from Charles II, c1676, by John Michael Wright. See the full image Photograph: Royal Collection Trust/© Her Majesty Queen Elizabeth II
Charles II had the face of a corrupt satyr. His portraits resemble the one Oscar Wilde’s Dorian Gray kept in the attic. Every sin seems etched into the work as a grotesque wrinkle. His heavy black eyebrows and ungainly nose add to the ugliness. In a popular print that was pinned up in about 1661 in a pub or coffee house (it still has the pinholes), these features are exaggerated into an almost devilish mask.

He may not have minded looking like a stage villain, because he loved and supported the stage. When Charles was invited to claim the British throne in 1660, plays had been illegal for nearly two decades. They were banned for their “lascivious Mirth and Levity” in 1642 by the Puritans, who won the English civil war. Their religious bigotry was one of the reasons crowds hailed Charles II so enthusiastically when he returned from exile in the Low Countries, after the death of the Puritan dictator Oliver Cromwell.

A mezzotint portrait of a nude Nell Gwyn, posing as Venus, reveals the exact nature of Charles II’s passion for theatre – it was primarily a passion for female actors. Women were immediately employed as professional actors when the theatres reopened in 1660. In Shakespeare’s time that had been inconceivable. Gwyn rose from selling oranges to acting in comedies, to bearing the king two illegitimate sons, as a portrait in which she reclines on draperies while her two blueblooded boys float above her breasts. No, this was not feminism, but it wasn’t cultural conservatism either.

All of these are printed images, not paintings. They’re beautiful, funny, strange and grotesque – we see in these prints the beginning of the visual world that would soon produce William Hogarth. Most spectacular of all, a giant louse bursts out of a book, its vicious claws clutching a stalk, its hard carapace covered with tiny hairs. It would make a great illustration to Franz Kafka’s Metamorphosis, in which a man wakes up to find he has changed into a giant insect. In fact, this is a superbly accurate scientific drawing from Robert Hooke’s 1665 book Micrographia, in which this pioneering researcher describes and illustrates tiny creatures he has seen with a microscope. Charles II is known to have owned similar drawings by Hooke’s friend Christopher Wren.

Hooke was a gifted artist as well as one of the founders of modern science. He’d learned to draw from his teacher, the artist Peter Lely, who became the definitive painter of the Restoration court. The reason Lely was so perfect for the job was that he enjoyed painting “beauties” – he actually painted a series called The Windsor Beauties. While not exactly masterpieces, they leap into life when he gets aroused. The king’s mistress Louise de Kérouaille, Duchess of Portsmouth, looks powerful and monarchical, holding a crown of flowers between her fingers as if it was the monarchy itself. Protestants feared her power over the king lured him towards Catholicism.

This is all good fun and fascinating history, but the real drop-dead highlights of this absorbing show don’t come from Britain at all. Charles spent a lot of money recreating the royal art collection, which had been sold off by Cromwell. In fact, the Royal Collection as we know it starts with his reign – and what gobsmacking works he purchased, or sometimes repurchased. He got his hands on the greatest collection of Leonardo da Vinci’s drawings in the world. Just four are on view here from the hundreds of stupendous sheets that are still preserved in the Royal Library, but they light up a winter day.

Another treasure is Lorenzo Lotto’s portrait of Andrea Odoni, my favourite painting owned by the Queen. In this 1527 masterpiece, a man puts his hand on his heart as he daydreams of ancient grandeur amid his collection of Roman marble fragments. The white and yellow stone heads and headless bodies seem to come to life around him in this intensely atmospheric, enigmatic painting.

If only Britain’s public art collections were as rich. If only the Royal Collection was part of our free museums. Exhibitions like this show that it is undeniably being well run. At a time when the monarchy looks like Britain’s healthiest institution, even its most outrageous asset, the Royal Collection is clearly being managed intelligently. In a year when good exhibitions of pre-modern art were thin on the ground, God bless the royals for giving a damn about history.

Charles II: Art and Power is at the Queen’s Gallery, Buckingham Palace, London, until 13 May.
Publicada por Jeeves em 01:56