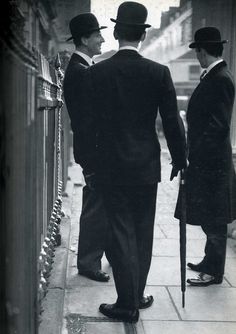 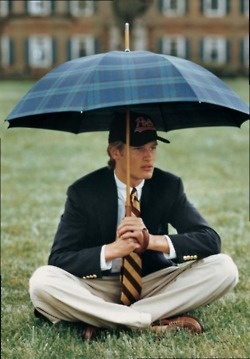 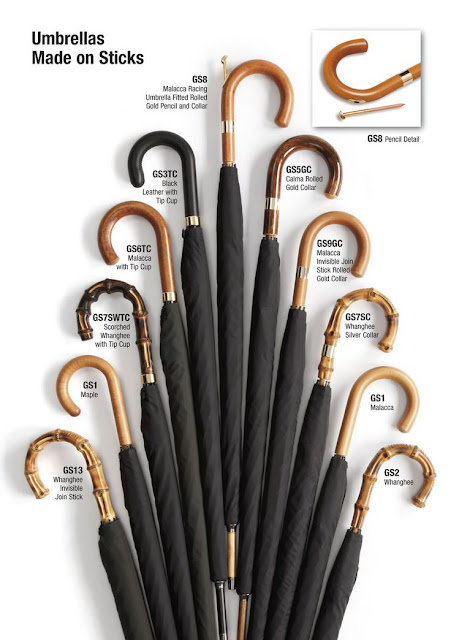 THE UMBRELLA COMES TO EUROPE
http://foxumbrellas.com/index.php/company-history/history-of-the-umbrella

Apparently the umbrella entered Europe via Greece, Italy and Turkey. Tradition has it that the Normans brought the umbrella to England with them (presumably some sort of canopy regalia) in 1066, but there is nothing very tangible to support this. Umbrellas were however in common use in France in 1620. It is often claimed that umbrellas were introduced to England by Jonas Hanway about 1750, but this is definitely not correct. They are mentioned in Gays Trivia, The Art of Walking the Streets of London, published in 1712 and also in the Female Tattler for December 12th 1709. But Jonas Hanway was the first Englishman to carry an umbrella regularly. He was pelted by coachmen and chairmen for his persistence, since they saw this craze could endanger there own means of livelihood.

It should be remembered that in those days the only covered transport was the private coach or Sedan chair. Also that the umbrellas were very heavy, ungainly things made with whalebone or cane ribs, mounted on a long, stout stick of about 1" in diameter and covered with a heavy cotton fabric, waterproofed by oiling or waxing.

Only on a few public buildings was rainwater led from the roofs by gutters and fallpipes. In the main the water simply ran off the roof into the street. Although sometimes it was collected in gutters under the eaves and poured out like a miniature Niagara Falls, through the mouths of grotesque gargoyles at each corner of the building. Pavements were unknown and the gutter or kennel was in the middle of the street. The choice was then either to carry one of these portable tents or get soaked.

By 1787 the umbrella had achieved some considerable measure of popularity within a short period of time and the French ladies umbrellas had achieved remarkable elegance, and on the continent they were used as much as a sunshade as protection from rain. And it is from this period and via the sunshade that umbrellas began to develop into something lighter and more graceful.

Between 1816 and 1820 men's umbrellas had again reached a weight of over four pounds, but ladies umbrellas continued to be much lighter, weighing less than one pound. This was partly due to the use of finer fabric of silk and by the substitution of light iron stretchers, but in general umbrellas in this country, until the middle of the last century, were made with ribs of whalebone for the best quality and of split cane for the cheaper quality.

Then in the late 1800's came the development of the Fox Steel Ribs and Frames. And so the modern umbrella was born. 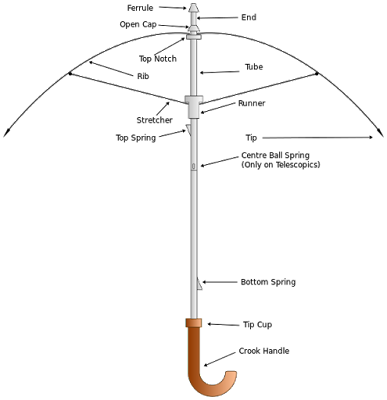 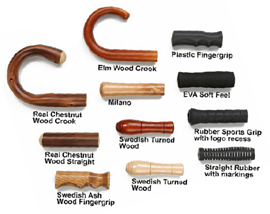 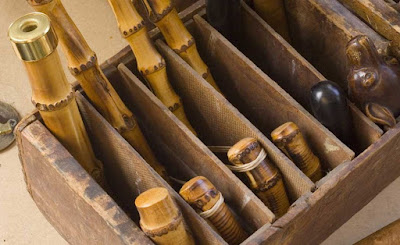 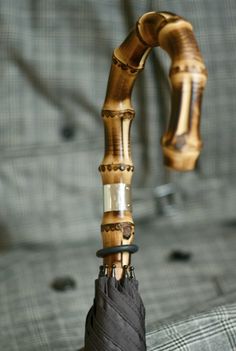 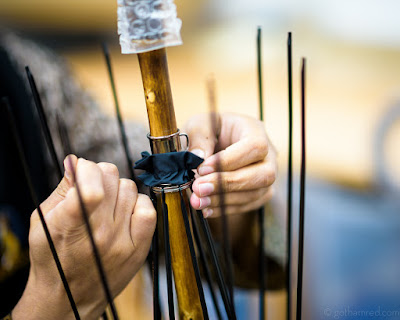 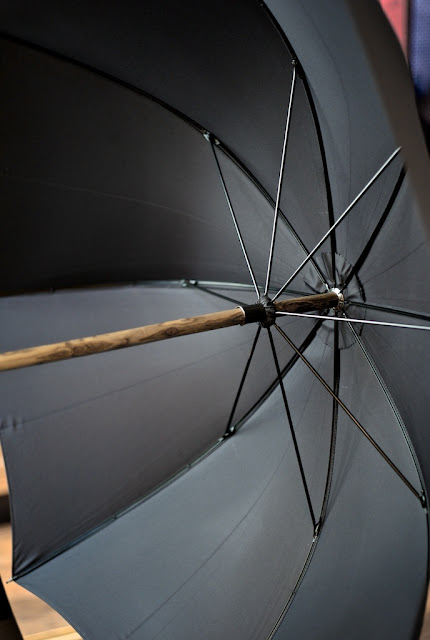 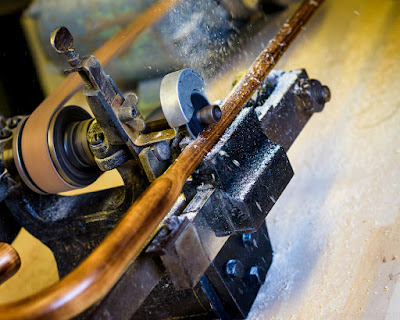 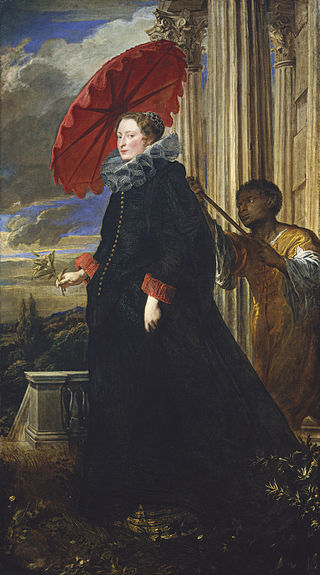 Thomas Wright, in his Domestic Manners of the English, gives a drawing from the Harleian MS., No. 604, which represents an Anglo-Saxon gentleman walking out attended by his servant, the servant carrying an umbrella with a handle that slopes backwards, so as to bring the umbrella over the head of the person in front. It probably could not be closed, but otherwise it looks like an ordinary umbrella, and the ribs are represented distinctly.

The use of the parasol and umbrella in France and England was adopted, probably from China, about the middle of the seventeenth century. At that period, pictorial representations of it are frequently found, some of which exhibit the peculiar broad and deep canopy belonging to the large parasol of the Chinese Government officials, borne by native attendants.

John Evelyn, in his Diary for June 22, 1664, mentions a collection of rarities shown to him by "Thompson", a Roman Catholic priest, sent by the Jesuits of Japan and China to France.[23] Among the curiosities were "fans like those our ladies use, but much larger, and with long handles, strangely carved and filled with Chinese characters", which is evidently a description of the parasol.

In Thomas Coryat's Crudities, published in 1611, about a century and a half prior to the general introduction of the umbrella into England, is a reference to a custom of riders in Italy using umbrellas:

And many of them doe carry other fine things of a far greater price, that will cost at the least a duckat, which they commonly call in the Italian tongue umbrellas, that is, things which minister shadowve to them for shelter against the scorching heate of the sunne. These are made of leather, something answerable to the forme of a little cannopy, & hooped in the inside with divers little wooden hoopes that extend the umbrella in a pretty large compasse. They are used especially by horsemen, who carry them in their hands when they ride, fastening the end of the handle upon one of their thighs, and they impart so large a shadow unto them, that it keepeth the heate of the sunne from the upper parts of their bodies.

In John Florio's "A WORLD of Words" (1598), the Italian word Ombrella is translated

a fan, a canopie. also a testern or cloth of state for a prince. also a kind of round fan or shadowing that they vse to ride with in sommer in Italy, a little shade. Also a bonegrace for a woman. Also the husk or cod of any seede or corne. also a broad spreding bunch, as of fenell, nill, or elder bloomes.

In Randle Cotgrave's Dictionary of the French and English Tongues (1614), the French Ombrelle is translated

An umbrello; a (fashion of) round and broad fanne, wherewith the Indians (and from them our great ones) preserve themselves from the heat of a scorching sunne; and hence any little shadow, fanne, or thing, wherewith women hide their faces from the sunne.

In Fynes Moryson's Itinerary (1617) is a similar allusion to the habit of carrying umbrellas in hot countries "to auoide the beames of the Sunne". Their employment, says the author, is dangerous, "because they gather the heate into a pyramidall point, and thence cast it down perpendicularly upon the head, except they know how to carry them for auoyding that danger".

In France, the umbrella (parapluie) began to appear in 1660s, when the fabric of parasols carried for protection against the sun was coated with wax. The inventory of the French royal court in 1763 mentioned "eleven parasols of taffeta in different colours" as well as "three parasols of waxed toile, decorated around the edges with lace of gold and silver." They were rare, and the word parapluie ("against the rain") did not enter the dictionary of the Académie française until 1718.

Kersey's Dictionary (1708) describes an umbrella as a "screen commonly used by women to keep off rain".

The first lightweight folding umbrella in Europe was introduced in 1710 by a Paris merchant named Jean Marius, whose shop was located near the barrier of Saint-Honoré. It could be opened and closed in the same way as modern umbrellas, and weighed less than one kilogram. Marius received from the King the exclusive right to produce folding umbrellas for five years. A model was purchased by the Princess Palatine in 1712, and she enthused about it to her aristocratic friends, making it an essential fashion item for Parisiennes. In 1759, a French scientist named Navarre presented a new design to the French Academy of Sciences for an umbrella combined with a cane. Pressing a small button on the side of the cane opened the umbrella.

Their use became widespread in Paris. In 1768, a Paris magazine reported:

"The common usage for quite some time now is not to go out without an umbrella, and to have the inconvenience of carrying it under your arm for six months in order to use it perhaps six times. Those who do not want to be mistaken for vulgar people much prefer to take the risk of being soaked, rather than to be regarded as someone who goes on foot; an umbrella is a sure sign of someone who doesn't have his own carriage."

In 1769, the Maison Antoine, a store at the Magasin d'Italie on rue Saint-Denis, was the first to offer umbrellas for rent to those caught in downpours, and it became a common practice. The Lieutenant General of Police of Paris issued regulations for the rental umbrellas; they were made of oiled green silk, and carried a number so they could be found and reclaimed if someone walked off with one.

By 1808 there were seven shops making and selling umbrellas in Paris; one shop, Sagnier on rue des Vielles-Haudriettes, received the first patent given for an invention in France for a new model of umbrella. By 1813 there were 42 shops; by 1848 there were three hundred seventy-seven small shops making umbrellas in Paris, employing 1400 workers. By the end of the century, however, cheaper manufacturers in the Auvergne replaced Paris as the centre of umbrella manufacturing, and the town of Aurillac became the umbrella capital of France. The town still produces about half the umbrellas made in France; the umbrella factories there employ about one hundred workers.

In Daniel Defoe's Robinson Crusoe, he constructed his own umbrella in imitation of those that he had seen used in Brazil. "I covered it with skins," he says, "the hair outwards, so that it cast off the rain like a pent-house, and kept off the sun so effectually, that I could walk out in the hottest of the weather with greater advantage than I could before in the coolest." From this description the original heavy umbrella came to be called "Robinson" which they retained for many years in England.

Captain James Cook, in one of his voyages in the late 18th century, reported seeing some of the natives of the South Pacific Islands with umbrellas made of palm leaves.

The use of the umbrella or parasol (though not unknown) was uncommon in England during the earlier half of the eighteenth century, as is evident from the comment made by General (then Lieut.-Colonel) James Wolfe, when writing from Paris in 1752; he speaks of the use of umbrellas for protection from the sun and rain, and wonders why a similar practice did not occur in England. About the same time, umbrellas came into general use as people found their value, and got over the shyness natural to its introduction. Jonas Hanway, the founder of the Magdalen Hospital, has the credit of being the first man who ventured to dare public reproach and ridicule by carrying one habitually in London. As he died in 1786, and he is said to have carried an umbrella for thirty years, the date of its first use by him may be set down at about 1750. John Macdonald[disambiguation needed] relates that in 1770, he used to be addressed as, "Frenchman, Frenchman! why don't you call a coach?" whenever he went out with his umbrella. By 1788 however they seem to have been accepted: a London newspaper advertises the sale of 'improved and pocket Umbrellas, on steel frames, with every other kind of common Umbrella.' But full acceptance is not complete even today with some considering umbrellas effete.

Since then, the umbrella has come into general use, in consequence of numerous improvements. In China people learned how to waterproof their paper umbrellas with wax and lacquer. The transition to the present portable form is due, partly, to the substitution of silk and gingham for the heavy and troublesome oiled silk, which admitted of the ribs and frames being made much lighter, and also to many ingenious mechanical improvements in the framework. Victorian era umbrellas had frames of wood or baleen, but these devices were expensive and hard to fold when wet. Samuel Fox invented the steel-ribbed umbrella in 1852; however, the Encyclopédie Méthodique mentions metal ribs at the end of the eighteenth century, and they were also on sale in London during the 1780s. Modern designs usually employ a telescoping steel trunk; new materials such as cotton, plastic film and nylon often replace the original silk.
Publicada por Jeeves em 23:18