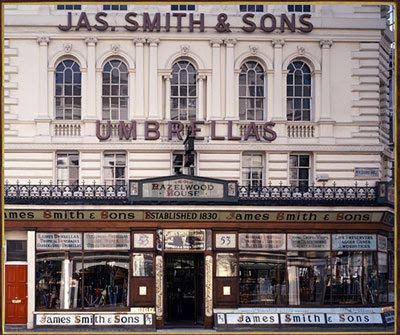 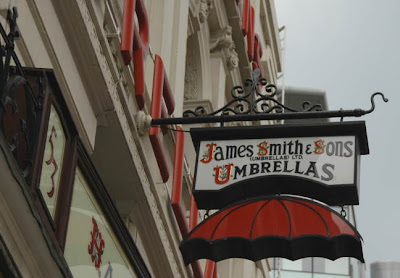 By Olivia Parker 17 Feb 2012 in The Telegraph
A slice of Victorian London is thriving on Oxford Street. A five-minute walk from the bland expanse of high-street shops that stretch from Tottenham Court Road station westwards to Bond Street, James Smith and Sons Umbrella Shop has remained largely unchanged since it moved to the location in 1857 (the shop was originally located in Foubert Place, off Regent Street, where it opened in 1830).
The windows of the handsome shop make an immediate impact on anyone walking past the corner of New Oxford Street, filled as they are with rows and rows of elegantly shaped umbrellas. Their design has remained relatively unaltered over the years, even as the streets surrounding the shop have evolved from cobbled laneways carrying horse-drawn carriages to rubble-strewn wartime streets to today’s traffic-choked arteries.

Inside, James Smith and Sons sells every conceivable type of men's and women’s umbrellas and parasols, as well as made-to-measure walking sticks (fitted while you wait). Given the heritage of the brand, some prices are pleasingly affordable – walking sticks are cut to length from £30. Others prove more prohibitive, with some antique and bespoke items costing thousands of pounds. Many are assembled in the workshop on site, their carefully crafted parts ordered and sent from specialists across Europe. Some are ‘classic city umbrellas’, topped with intricately wrought handles and bearing engraved silver collars, others are sun umbrellas with tassels hanging off them for a more flamboyant finish.

The walking sticks, both the shepherd’s ‘Crook’ style and the hooked ‘Derby’, are a marvel; topped with striking silver animal heads and skulls for handles, they make the prospect of using an umbrella, should you need to, infinitely appealing. The shop even does an unexpected line in gadgetry with made-to-order ‘drinking sticks’, which hold two slim glasses and a tiny flask, and canes whose handles untwist to become a corkscrew or a briarwood pipe.

A tradition of craftsmanship runs through all the products on show. The shop is the oldest umbrella shop in Europe and members of the original Smith family are still connected to the business. The customer base has remained constant too, with members of the same families remaining loyal to the business for generations. William Gladstone was a customer in the 1800s; today customers come from all over and, presumably for decorative purposes rather than everyday use, goods from the shop are highly sought after in Africa and the Middle East. Looking through the stock I’m taken by a fabulous ceremonial wand topped with a chunky silver hippo, commissioned for a Nigerian prince.

Perhaps the man who has had the most significance on the business is Jonas Hanway, whose portrait hangs in the shop. Believed to be the first Londoner who owned an umbrella, his canopy was mocked by coachmen who were aggrieved at the loss of custom the veil provided. Over time his curious accessory gained acceptance; although many of the clockmakers, locksmiths and butchers that surrounded James Smith & Sons have closed down, the umbrella shop has been there to serve Londoners and visitors whatever the weather. 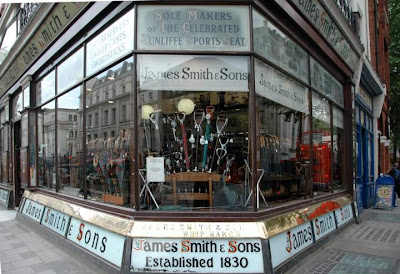 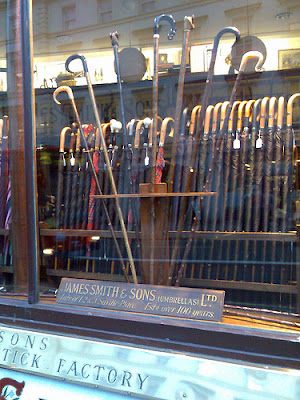 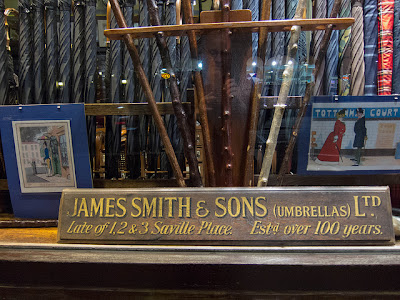 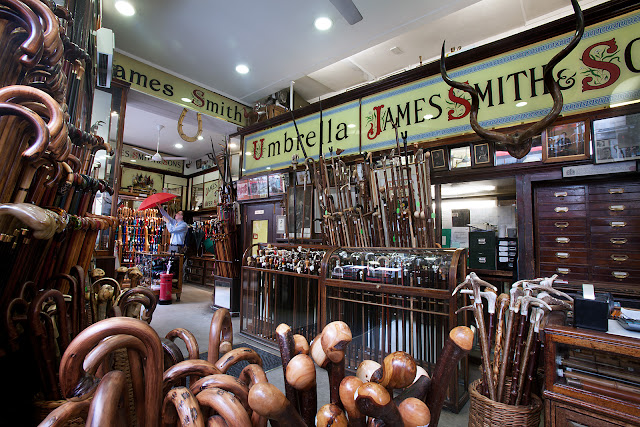 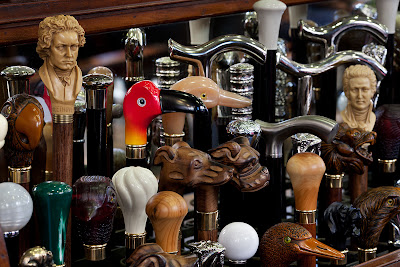 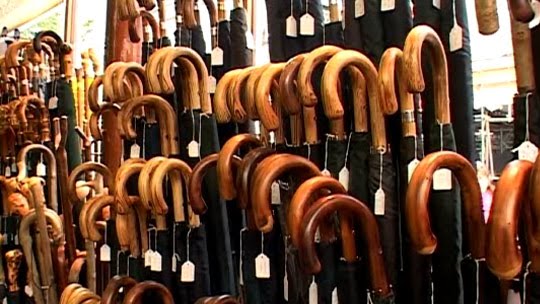 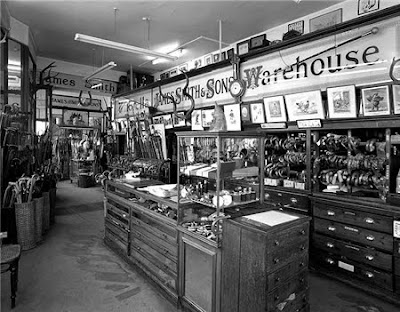 In 1830 James Smith founded the famous firm of James Smith and Sons at Foubert Place in London's West End. His son, also called James, was quite an entrepreneur and moved the business to New Oxford Street in 1857 - he also opened six other businesses including a hatters and a barbershop. He had eight sons and a daughter, and when he moved to Tasmania with two of his sons to take up farming, he left the others to run the business at home. In 1930 it was his grandson Mr Mesger (great grandson of the founder) who moved back from Tasmania to take over the running of the business.

A branch shop was opened just off Savile Row and it was from here that umbrellas were sold to Gladstone, Bonar Law and Lord Curzon, among many other dignitaries. When this shop was pulled down to make way for a new road, the branch moved to New Burlington Street, but this was unfortunately destroyed in the Second World War.

The business in umbrellas has always thrived, perhaps because of the English weather, but also because of the outstanding reputation the company has for new umbrellas, and their repair service. The company was one of the first to use the famous Fox Frame and has led the field in utilising the most recent advances in fabrics and structure.

For a long time the company specialised in making ceremonial umbrellas, maces, and gentlemen's canes and these are in service around the world. Until the 1920's the cane or stick was an essential part of the well dressed male's attire. During World War I many hundreds of thousands of military 'swagger sticks' were sold to soldiers, but today the cane or stick is used mostly as an aid to walking.

Much of the business for sticks comes from America where there has always been a shortage of good sticks and canes. One American client even asked the company to make him a stick in every English wood possible - he received over 70 sticks in total!

Apart from being the leading umbrella company for 180 years and the first name in sticks and canes, the shop on New Oxford Street is a legend in itself. It is a perfect example of Victorian shop front design and has remained virtually unaltered in 140 years. Inside, it is a unique experience; most of the fittings were designed and made by a fitter employed by Mr Smith.

The First James Smith started our tradition of umbrella making in 1830 when he opened a small shop in Fouberts Place, off Regent Street. He made the umbrellas at the back of the shop and customers were served at the front.

That tradition is still maintained in our New Oxford Street premises. Our workshops have always been situated in the basement and it is there that we still make umbrellas and walking sticks.

These days we sell so many that some have to be made specially for us by other small family firms. The design and materials of the gentleman's traditional umbrella have changed little over the years, apart from the fact that most of the covers nowadays are made from nylon. It is generally recognised that London has been the home of the best umbrellas and walking sticks and we are pleased to be able to continue that tradition.
in http://www.james-smith.co.uk