Summer of Rockets review – Poliakoff has pulled it off at last!
4 / 5 stars 4 out of 5 stars.
This cold-war drama has Stephen Poliakoff’s trademark stilted dialogue, odd acting and overload of posh houses – but this time, I want to watch more

Magnificent as always … Keeley Hawes as Kathleen Shaw in Summer of Rockets. Photograph: Sophie Mutevelian/BBC/Little Island Productions
There is much to worry about in Summer of Rockets (BBC Two), Stephen Poliakoff’s latest drama. Will the posh Shaws turn up for the arriviste Petrukhin’s picnic? Will Petrukhin’s new invention save his business? Will his debutante daughter make it to Buckingham Palace on time? Will he ever find out who is following him? Will a nuclear weapon fall out of the sky? Do I even care? I think I do, actually. That is not often the case with a Poliakoff drama. Usually the characters are too chilly, too unsettling, with his strange, stilted dialogue in their mouths. But the Petrukhins seem warmer, and more engaging, than usual.

Perhaps that is because this drama is semi-autobiographical. It is 1957, and Petrukhin – like Poliakoff’s father – is a Russian Jew and maker of bespoke hearing aids. Winston Churchill is a customer, though not during the war in case Petrukhin – what with his Russian-ness – was bugging his ears. His outsider status is highlighted from the start. Petrukhin (Toby Stephens), and his family, as well as his righthand man Courtney Johnson (Gary Beadle), who is black, are questioned before they are admitted to the royal enclosure at Goodwood races. Once inside, they all get terrible looks. But then their son Sasha goes missing and one of the posh women (Keeley Hawes, magnificent as always) finds him. Petrukhin is thrilled to make her acquaintance, and that of her husband, the MP Richard Shaw.

Despite his brazen social climbing, Petrukhin is endearing. “I taught myself to speak with a perfect upper-class English accent,” he says, with more than a bit of Khrushchev around the vowels, to his daughter Hannah, as he drops her off at her dreaded finishing school. “Nobody can tell the difference now.” Hannah suppresses a lipsticked smirk, kindly.

Unlike her father, she is not interested in fitting in. She doesn’t want to go to etiquette classes, nor be presented to the Queen, as her mother was. You sense change is in the air – it’s 1958 and these are the last debutantes. The feminist movement is just around the corner. “It’s idiotic for a grown woman to be in a class where she’s being taught how to walk and how to sit, for goodness sake,” says Hannah, who suffers the worst dialogue. Still, she goes through with it to please her parents and there’s a tense scene where, anti-Cinderella, she smashes up her broken shoes to get to the palace ball. “I’m going to make it, you’ll see,” she shouts, galloping up the Mall.

While she’s off to etiquette classes, her little brother Sasha is being sent to a terrifying boarding school, where he is the only Jewish boy (“that we know about,” says a schoolmaster, accusingly).

Petrukhin’s business is in trouble but, ever mindful of appearances, he is appalled he has to give up his driver. “It’s almost like we’re naked,” he says to Johnson, who is driving them to an appointment at the Shaws’ house (castle, more like) to fit an aged aunt with a hearing aid.

All the better to hear Richard Shaw’s speech to his local Conservative association. “I want to talk about our place in the world,” he begins, “this country of ours and our relationship with our greatest ally, the United States. Is it a well-balanced marriage that is mutually beneficial, or is it a stormy love affair about to rupture after all we’ve been through during the war?” Before Poliakoff can labour the pro-EU point any further, he gets back to the main story, which is that there’s clearly something wrong between the outwardly perfect Kathleen and Richard Shaw.

The weird quirks of Poliakoff’s work – the mannered dialogue, the odd acting, the way his locations and cars and costumes always look too pristine – give it a dreamy and disquieting feel, which you either like or you don’t. The portentous parallels to now are a bit tiresome, but comprehensive at least – the rise in anti-semitism and racism, immigration, our relationship with technology, and a general feel of impending doom. As usual, there is a terrific cast, and some lovely posh houses. There even appears to be a plot. And Timothy Spall, as lunch guest Lord Wallington, makes the best entrance I’ve seen for a while: “I’ve brought an enormous cheese,” he says as his driver struggles under its weight. “I’ve no idea why. But I have.” I wasn’t sure if I was meant to laugh.

Petrukhin hopes that his invention, a “staff locator”, will save the business and make his fortune. There is a dramatic demonstration at a hospital, where it looks like the device has failed. Then, “It went off! It really did go off!” says the impressed young doctor, summoned from the chapel.

The whizzy new pager is the reason Petrukhin is being followed, he thinks, by a rival company bent on stealing it. They’re watched at the races. Then spied on by a sinister man (Mark Bonnar, looking bloodless as a corpse). Petrukhin and Johnson are trailed twice by a car. At the end of this episode, they stop in the middle of the deserted country road to confront them. Four men, menacing in suits and trilbies, get out. “I don’t think these are our competitors, somehow,” Petrukhin says to Johnson, and then, because Poliakoff is never one to miss an opportunity for some artificial surplus utterance: “Who are these men, Courtney?” But I’m intrigued to find out. 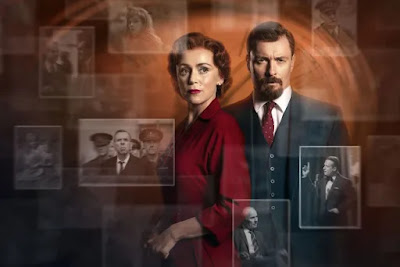 Summer of Rockets is a six-episode British Cold War television miniseries, that premiered on BBC Two in the United Kingdom on 22 May 2019. The series was written and directed by Stephen Poliakoff and stars Keeley Hawes, Linus Roache, Timothy Spall and Toby Stephens.

Plot
A Russian-born Jewish inventor, Samuel Petrukhin, is tasked with a secret mission by MI5. Samuel specialises in the development of hearing aids and is asked to use his technological expertise to contribute to western Cold War efforts. Following the tensions of the Space Race and the first hydrogen bomb test, Samuel's efforts play a part in the emergence of the modern world.

Production
Development
Summer of Rockets was originally announced in May 2017 alongside two other BBC commissions which were 2017's Little Women and 2018's A Very English Scandal.[6] In May 2018, Keeley Hawes, Toby Stephens, Timothy Spall and Linus Roache were announced as joining the project.