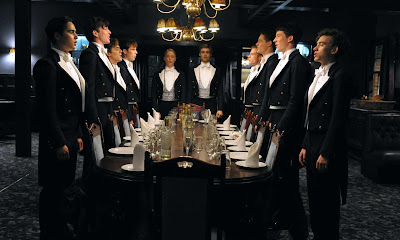 SEE ALSO: "THE RIOT CLUB / POSH BRITAIN /The seven rules of being posh" 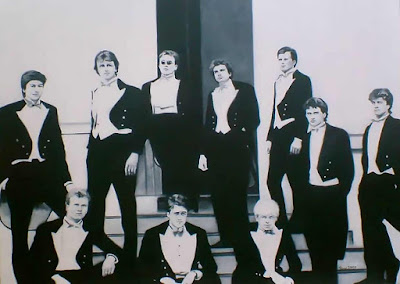 Sexism, vandalism and bullying: inside the Boris Johnson-era Bullingdon Club
The Observer
Woman who recruited members during the club’s 80s heyday reveals the true extent of members’ destructive behaviour

It is notorious for champagne-swilling, restaurant-trashing, “pleb”-taunting elitism. Now new light has been shed on the outrageous antics of the Bullingdon Club – the Oxford University group that may be about to produce its second British prime minister – by someone intimately connected to it during Boris Johnson’s membership.

A woman who acted as a scout for potential members of the Bullingdon Club in the mid-1980s has said that female prostitutes performed sex acts at its lavish dinners, women were routinely belittled, and that intimidation and vandalism were its hallmarks.

The woman, who has asked not to be named, is now an academic and regards her involvement with the male-only Bullingdon Club more than 30 years ago with extreme regret and embarrassment.

In her first week at Oxford in 1983, she was approached by a member of the club to identify potential recruits – a role she performed throughout her time as an undergraduate. She also had an 18-month relationship with a man who became a president of the club. In her final year at Oxford, she shared a house with Bullingdon members.

Her involvement with the club coincided with Boris Johnson’s membership and overlapped with David Cameron’s. She was not a close friend of Johnson but they had a number of good friends in common, she said. She has maintained contact with several former Bullingdon members over the past 30-plus years.

“I helped recruit for the Bullingdon, and advised [the president] on its activities,” she told the Observer. “I know very well what the patterns of behaviour were. When [her ex-boyfriend] was president, they had prostitutes at their dinners. They performed sex acts, sometimes at the shared dining table, and sometimes elsewhere on the premises.”

In 2016, Ralph Perry-Robinson, a Bullingdon member in the mid-1980s, confirmed that prostitutes attended club events. “We always hire whores… prostitutes were paid extra by members who wanted to use them,” he told the Daily Beast.

The woman said: “The whole culture was to get extremely drunk and exert vandalism. Every time someone was elected, they had to have their room smashed to pieces. People talk about the Bullingdon Club ‘trashing’ places, but it was serious criminal damage.”

One incident she recalled at Magdalen College involved “a large galleried room that had just been refurbished with expensive wood panelling. Every piece of furniture that could have been broken was broken, every liquid sprayed around the room, the panelling was cracked, and everything was piled in a heap in the middle of the room. The college door to Magdalen was smashed to pieces.

“I remember the clerk of works looking at the mess in complete dismay. The college had spent a great deal on the refurbishment. All the students who heard this late-night destruction were terrified, I remember.”

Bullingdon members “found it amusing if people were intimidated or frightened by their behaviour. I remember them walking down a street in Oxford in their tails, chanting ‘Buller, Buller’ and smashing bottles along the way, just to cow people.”

She recalled a party held in a room at Magdalen in the academic year 1985/6 at which guests were invited to “come as your alter ego”. Two Bullingdon members appeared in Nazi uniforms and “goose-stepped back and forth in the upstairs galleried area”. They were photographed by a friend of the woman who was taking pictures of the party.

“The next morning [the pair] came round to her room. They barged in and pulled the roll of film out of the camera. She was a feisty character, and told lots of people about this. She died a couple of years ago.”

Boris was one of the club’s big beasts. He was up for anything. They treated certain people with absolute disdain.
Former club recruiter

The woman who was the club recruiter said: “Boris was one of the big beasts of the club. He was up for anything. They treated certain types of people with absolute disdain, and referred to them as ‘plebs’ or ‘grockles’, and the police were always called ‘plod’. Their attitude was that women were there for their entertainment.”

She said there was a “culture of excess” in the 1980s in which the activities of the Bullingdon Club felt “normalised”. “They had an air of entitlement and superiority.”

Although many former members of the Bullingdon Club – including Johnson – have since publicly regretted their involvement in some of its activities, they developed “close-knit, generational ties,” said the woman. “Many still see each other. They have long-established networks, and they think it’s in their power to confer high office on anyone they choose. There is a bond of loyalty.”

The club was founded in 1780 as a hunting and cricket club. Two hundred years later, it was infamous for its distinctive uniform of tailcoats with white silk facings, and its heavy drinking and wild behaviour.

In 2013, Johnson – who reputedly still greets former members with a cry of “Buller, Buller, Buller” – described it as “a truly shameful vignette of almost superhuman undergraduate arrogance, toffishness and twittishness”. He added: “But at the time you felt it was wonderful to be going round swanking it up.”

A photograph of club members in their Bullingdon tailcoats taken in 1987 has been repeatedly republished since Cameron became Tory leader. The picture made him “cringe”, he said. “We all did stupid things when we are young and we should learn the lessons.”

Last October, Bullingdon Club members were banned from holding positions in the Oxford University Conservative Association. The association’s president, Ben Etty, said the club’s “values and activities had no place in the modern Conservative party”.

In recent years, membership has reportedly dwindled to a handful as today’s undergraduates shun an organisation with a toxic reputation.

The woman who recruited members in Oxford in the 1980s said that she was horrified at the prospect of Johnson becoming prime minister.

“The characteristics he displayed at Oxford – entitlement, aggression, amorality, lack of concern for others – are still there, dressed up in a contrived, jovial image. It’s a mask to sanitise some ugly features.” 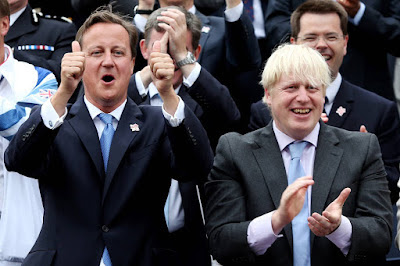 In a BBC profile 'Boris Johnson: The Irresistible Rise' London's mayor also reveals his ambition to be British Prime Minister

Boris Johnson still greets fellow members of the Bullingdon Club, the notorious Oxford drinking society whose alumni include David Cameron and George Osborne, with a cry of “Buller, Buller, Buller!”, the Mayor of London has revealed.

Johnson breaks the strict code of “omerta” surrounding the Club, which is dominated by Etonians and only open to the wealthy and well-connected, in a new BBC profile, which explores his Prime Ministerial ambitions.

Writing in Radio Times, Michael Cockerell, the veteran political film-maker, reveals that the documentary includes a scene in which Johnson examines a famous photograph of himself, Cameron and other members of the “Buller” in their blue tailcoats with white silk facings, mustard waistcoats and gold buttons.

“This is a truly shameful vignette of almost superhuman undergraduate arrogance, toffishness and twittishness,” admits Johnson. “But at the time you felt it was wonderful to be going round swanking it up. Or was it? Actually I remember the dinners being incredibly drunken.”

He is reminded that one riotous Bullingdon dinner ended with a restaurant being smashed up and Boris and other members spending a night in a police cell. “Yes. And the abiding memory is of deep, deep self-loathing.”

Does Johnson, 46, still greet other Club members in public with the traditional greeting: “Buller, Buller, Buller!” “It may be that I do – in a satirical way,” he said.

During the film, Boris Johnson: The Irresistible Rise, its subject adds to the elaborate verbal constructions he employs to downplay his transparent desire to succeed David Cameron as Prime Minister.

“I think it’s a very tough job being Prime Minister,” he said. “Obviously, if the ball came loose from the back of a scrum – which it won’t – it would be a great, great thing to have a crack at. But it’s not going to happen.”

Previously Johnson had said he had as much chance of becoming Prime Minister as being decapitated by a Frisbee or reincarnated as an olive, or Elvis Presley.

Johnson admits that during arguments with Cameron “a lot of plaster comes off the ceiling” but this is all in the service of “trying to get a better deal for London, and to make sure that the Government doesn’t make a mistake.”

The film, broadcast next week, reveals that beneath his blustering, comical persona, Johnson is concealing artistic skills. At the age of 12 he painted a self-portrait resembling a Grecian demi-god.

His sister Rachel Johnson, the journalist and author, discloses that Boris’ always harboured imperial ambitions. She said: “As Boris was growing up whenever anyone asked him what he wanted to be, he would answer: ‘World King’.”

The roots of the competitive tension underlying the Johnson / Cameron relationship lie in their experience as Eton College contemporaries. Johnson was Captain of the School and elected to Eton’s elite group, known as Pop. David Cameron, two years younger, achieved neither distinction and is teasingly reminded of this by his rival to this day. “It gives Boris a sense of continuing superiority because he was Captain of the School,” Rachel Johnson says.

“I do remember Dave,” said Boris. “Someone said to me once, ‘That’s Cameron mi (minor)’ and there was this tiny chap, I dimly remember.”

The Mayor discloses that his “bumbling” persona may not always, as is often assumed, be a convenient disguise for a razor-sharp political intellect.