ITV blasted over 'insensitive' Keeping Up With The Aristocrats series 'Absolute joke' ...

ITV viewers have blasted the channel over their timing as they aired three-part series, Keeping Up With The Aristocrats, which takes a look inside Britain's most prominent aristocratic dynasties. 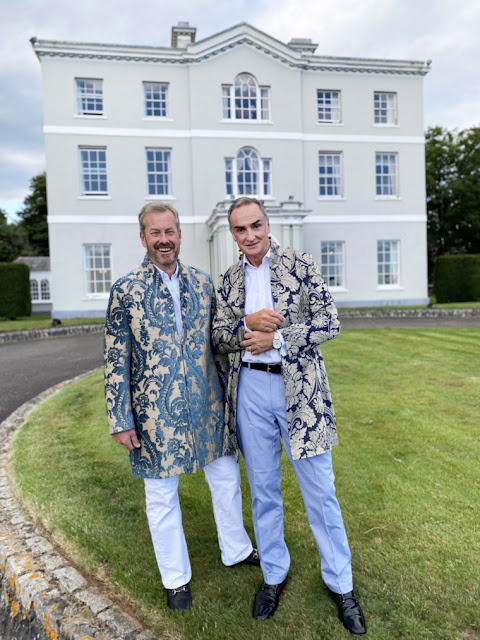 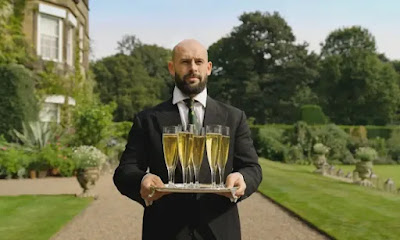 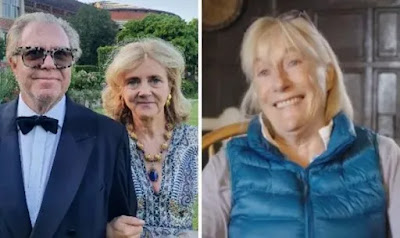 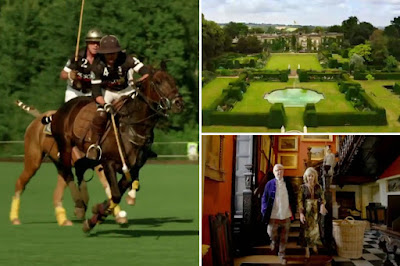 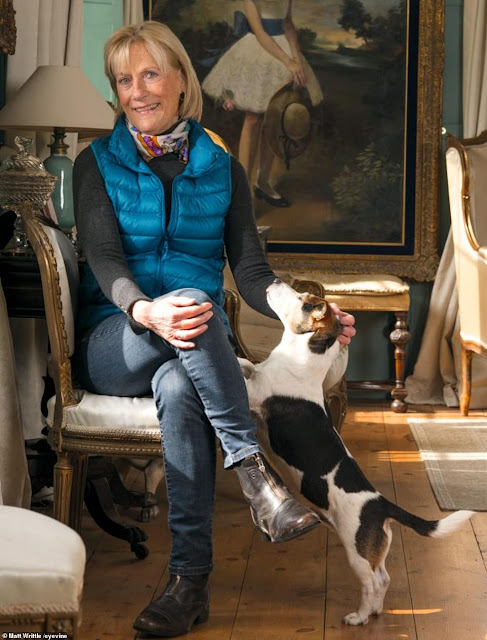 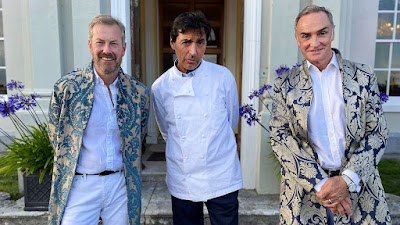 The series includes Lord Ivar Mountbatten and his husband James Coyle, Lord and Lady Fitzalan-Howard, Princess Olga Romanoff, and many others. However, ITV viewers slammed the show as many felt it was "insensitive" after so many people had struggled throughout the pandemic. A recent rise in taxes and utilities also meant some felt it was not appropriate to see aristocrats moan about being unable to afford a groundskeeper.

Episode one of the series saw Lord Ivar Mountbatten and husband James prepare to hold an evening of fine dining with Michelin star chef Jean-Christophe Novelli.

Meanwhile, Princess Olga was on a mission to find herself a new boyfriend after recruiting the help of her daughter and gay best friend.

She gave a very distinct description of what type of man she was looking for, revealing her mother wanted her to end up with Prince Charles, but she fancied Prince Philip more.

The couple explained they hope to flog bottles of wine from their vineyard for £20 a pop to help cover the upkeep of their home.

Viewers also got an insight to how much they pay in heating and electricity bills, with the pair trying to find cheaper and alternative ways to heat their manor.

Despite the light-hearted intentions of the show, fans were annoyed and upset with ITV over the “insensitive” timing with many insisting it wasn't appropriate given how many people are struggling with the cost of living in the UK.

Taking to Twitter to comment, @JillHudson21 wrote: “They’re bleating on about not having enough money? Are they serious!”

@Miss_appropriat commented: “Poor choice of @ITV to be airing this with so many people worrying about how they’ll afford the rise in bills.

“At least we should be grateful they didn’t schedule it immediately after #MartinLewis money show! #keepingupwiththearistocats.”

@Rng88991 said: “#keepingupwiththearistocrats rub it in for the poor and the COVID his – how the other half live!”

@Lesanrachanbern added: “When bills are rocketing, poverty increasing, and people struggling, @ITV see it fit to show how the other half live, bit insensitive.” 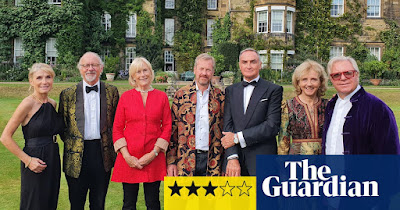 How will they survive with only 72 priceless paintings? And why are trained killers such bad boyfriends? Lose yourself in the absurdly laughable dilemmas of these aristos

I think we are probably supposed to express bafflement that there is still an audience for shows such as Keeping Up With the Aristocrats (ITV), in which we are promised, explicitly and without irony, “exclusive access” to “Britain’s most prominent dynasties”. To bewail the fact that the thought of seeing how the 0.1% live who were in the right place at the right time when William the Conqueror came to town still has us in its thrall. And to ponder whether the continuing reduction of the nation – its democracy, economy, cultural life, morality – to rubble at the hands of the elite (aristocracy-allied even when they’re not actually aristos) will ever curb the appetite for watching them in their natural, heavily pargeted habitats.

But television viewing is a complex business. You can keep up with the aristocrats for an hour in much the same way as you watch Bridgerton or Downton Abbey. Pure escapism – what would it be like to have won life’s lottery and spend your days wandering round a Georgian mansion being a second cousin of Prince Charles (like Lord Ivar Mountbatten) or the 400-year-old, 126-room sprawl of Carlton Towers like Lord Gerald Fitzalan-Howard (brother of the Duke of Norfolk and related to most of the people you read about in Philippa Gregory novels). “I’m always full of ideas,” he says. “Some good. Some just completely rubbish.”

And just who would not want to be Princess Olga Romanoff? Yes, one of the Romanovs, whose great uncle was the Tsar, murdered in 1918 by the Bolsheviks. The surviving family was scooped up by King George and put into Provender House in Kent, a 13th-century mansion Olga grew up in and still lives in. She is single, has a gay best friend to keep her company, and the Royal Windsor Horse Show to keep her entertained. She occasionally contemplates getting a boyfriend but says “I like the SAS type. A trained killer with a good body. But generally they turn out to be complete shits.” This, children, is what’s known as being in the very prime of life.

Or you could be swanning round a 17th-century pile with 500 acres and a vineyard, like Alexandra Sitwell and her husband Rick. Though he is the kind of man who reckons the greatest crime in life is “to be boring” and wears loud shirts and coloured glasses in an apparent attempt to prove himself otherwise, so I think we can infer Alexandra does have her own problems. I’d recommend a lot of long walks alone around that 500 acres if I were you, pet, and a deal of steady, secret drinking from the vineyard. Or go and have a word with Princess Olga. She’ll see you right.

We are sliding, already, into the second type of viewing – the hatewatch. There’s simply nothing like watching a bunch of people braying about their suffering (“If we sell a Titian, we’ll only have 72 Titians left! What am I supposed to look at? The Vermeers?”) to feel the cleansing fire of a hatred that harms no one.

The third kind is liberation viewing. To watch Lord Mountbatten and his husband James stress about finding enough tablecloth underlays to equip the one-night-only, £165-a-head pop-up restaurant they have hired Jean-Christophe Novelli to preside over is to know 27 types of catharsis at once, followed by a deep, deep peace. “I could not,” you think serenely, gazing into the middle distance from the sofa, “care less. Let the whole thing fail. Let them eat Greggs. It would matter – unlike almost everything else in this burning hellscape of a world – not one jot.”

In these absurd offerings, however, there is always at least one protrusion that snags your attention and leaves you wanting more. In this case, it is Dave, butler to Alexandra and Rick. Dave’s father, he tells us, was a pig farmer. His job, according to him, is the same thing. “You feed ’em when they’re hungry and clean up their mess.” I will take a 90-minute special on Dave and his dad as soon as you’re ready, ITV. 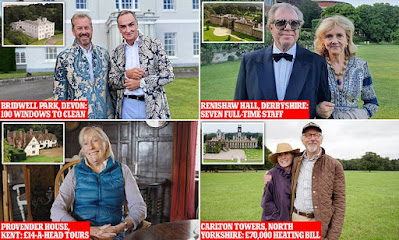 Keeping Up With The Aristocrats

Brand new three-part series.  In this light-hearted, endearing and eye-opening series, four of Britain’s most prominent aristocratic dynasties have given cameras exclusive access to reveal what really goes on behind their closed doors, over one summer’s social season.  Asset-rich, but often cash strapped, this posh bunch are mischievously self-deprecating and jolly. This fun and intriguing series lifts the lid on the lives of absolutely fabulous Lords, Ladies, and even the odd Princess, as they try to earn a crust.

In this opening episode, Lord Ivar Mountbatten and husband James gamble their reputation, and that of Michelin-starred chef Jean-Christophe Novelli, by hosting their first ever pop-up restaurant at their stately home of Bridwell. But with tickets costing a whopping £165 per head, can the Mountbattens sate the appetite of 50 fine diners? They include Lord Ivar’s cousin, Princess Olga Romanoff, who, currently single, is hunting down her idea type of man – ‘a trained killer’ no less...

Meanwhile, Lord and Lady Fitzalan-Howard are hoping to help fund the exorbitant running costs of their 126-room home, the imposing Carlton Towers, by turning part of their 3,000-acre estate into a vineyard.  And having bottled their very first bottle of sparkling wine, they seek advice from their friends, Alexandra Sitwell and husband Rick, who already own one the UK’s most successful vineyards at the stunning Renishaw Hall. Will the Fitzalan-Howards wine prove to be vintage, or just another sad bottle of plonk?