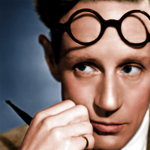 Theories surrounding Howard's death
A long-standing hypothesis states that the Germans believed that UK Prime Minister Winston Churchill, who had been in Algiers, was on board the flight. Churchill himself can be blamed for the spread of the theory; in his autobiography, he expresses sorrow that a mistake about his activities might have cost Howard his life.[28] In the BBC television series Churchill‘s Bodyguard (original broadcast 2006), it is suggested that (Abwehr) German intelligence agents were in contact with members of the merchant navy in Britain and had been informed of Churchill’s departure and route. German spies watching the airfields of neutral countries may have mistaken Howard and his manager, as they boarded their aircraft, for Churchill and his bodyguard. Howard's manager Alfred Chenhalls physically resembled Churchill, while Howard was tall and thin, like Churchill's bodyguard, Detective Inspector Walter H. Thompson. Churchill’s Bodyguard noted that Thompson had written that Churchill at times seemed clairvoyant about suspected threats to his safety and, acting on a premonition, he changed his departure to the following day. The crux of the theory posited that Churchill had asked one of his men to tamper with an engine on his aircraft, giving him an excuse not to travel at that time. Speculation by historians has also centred on whether the British code breakers had decrypted several top secret Enigma messages that detailed the assassination plan. Churchill wanted to protect any information that had been uncovered by the code breakers so that the Oberkommando der Wehrmacht would not suspect that their Enigma machines were compromised. Although the overwhelming majority of published documentation of the case, repudiates this theory, it remains a possibility. Coincidentally, the timing of Howard's takeoff and the flight path was similar to Churchill's, making it easy for the Germans to mistake the two flights.

Two books focusing on the final flight, Flight 777 (Ian Colvin, 1957), and In Search of My Father: A Portrait of Leslie Howard (Ronald Howard, 1984), concluded that the Germans shot down Howard's DC-3 for the specific purpose of killing him.[14] Howard had been travelling through Spain and Portugal, ostensibly lecturing on film, but also meeting with local propagandists and shoring up support for the Allied cause. The Germans in all probability suspected even more surreptitious activities since German agents were active throughout Spain and Portugal, which, like Switzerland, was a crossroads for persons from both sides, but even more accessible to Allied citizens. James Oglethorpe, a British historian specialising in the Second World War, has investigated Howard's connection to the secret services. Ronald Howard's book explores in great detail written German orders to the Ju 88 Staffel based in France, assigned to intercept the aircraft, as well as communiqués on the British side that verify intelligence reports of the time indicating a deliberate attack on Howard. These accounts also indicate that the Germans were aware of Churchill's whereabouts at the time and were not so naïve as to believe he would be travelling alone on board an unescorted and unarmed civilian aircraft, which Churchill also acknowledged as improbable. Howard and Chenhalls were not originally booked on the flight, and used their priority status to have passengers removed from the fully booked airliner.

Most of the 13 passengers were either British executives with corporate ties to Portugal, or lower-ranking British government civil servants. There were also two or three children of British military personnel.[14] The bumped passengers were the teenage sons of Cornelia Vanderbilt: Cecil, George and William Cecil, who had been recalled to London from their Swiss boarding school. Being bumped by Howard saved their lives. William Cecil is best associated with his ownership and preservation of his grandfather George Washington Vanderbilt's Biltmore estate in North Carolina. William Cecil described a story after several months back in London in which he met a woman who said she had secret war information and used his mother's phone to put in a call to the British Air Ministry. She told them that she had a message from Leslie Howard.

While ostensibly on "entertainer goodwill" tours at the behest of the British Council, Howard's intelligence-gathering activities had attracted German interest. The chance to demoralise Britain with the loss of one of its most outspokenly patriotic figures may have motivated the Luftwaffe attack. Ronald Howard was convinced the order to shoot down Howard's airliner came directly from Joseph Goebbels, Minister of Public Enlightenment and Propaganda in Nazi Germany, who had been ridiculed in one of Howard's films and who believed Howard to be the most dangerous British propagandist. The British Film Yearbook for 1945 described his work as "one of the most valuable facets of British propaganda". A 2008 book by Spanish writer José Rey Ximena claims that Howard was on a top-secret mission for Churchill to dissuade Francisco Franco, Spain's authoritarian dictator and head of state, from joining the Axis powers. Via an old girlfriend, Conchita Montenegro,[35] Howard had contacts with Ricardo Giménez-Arnau, a young diplomat in the Spanish Ministry of Foreign Affairs. Further circumstantial background evidence is revealed in Jimmy Burns's 2009 biography of his father, spymaster Tom Burns. According to author William Stevenson in A Man called Intrepid, his biography of Sir William Samuel Stephenson (no relation), the senior representative of British Intelligence for the western hemisphere during the Second World War, Stephenson postulated that the Germans knew about Howard's mission and ordered the aircraft shot down. Stephenson further claimed that Churchill knew in advance of the German intention to shoot down the aircraft, but decided to allow it to proceed to protect the fact that the British had broken the German Enigma code.

The 2010 biography by Estel Eforgan, Leslie Howard: The Lost Actor, examines currently available evidence and concludes that Howard was not a specific target, corroborating the claims by German sources that the shootdown was "an error in judgement". 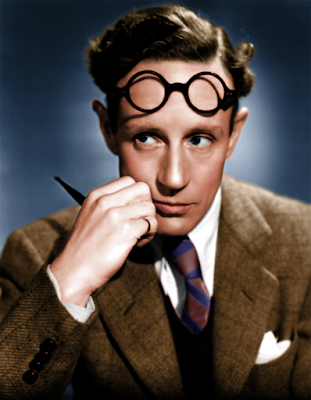 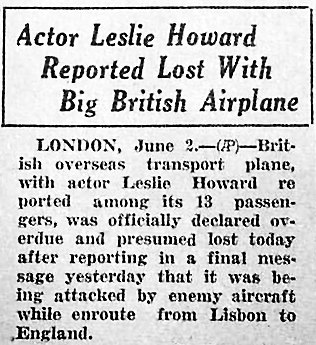 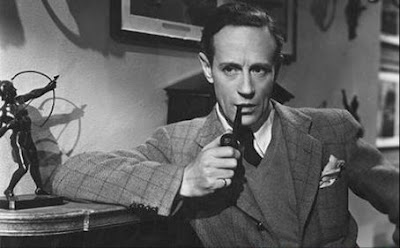 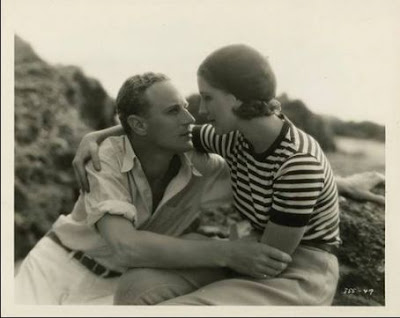 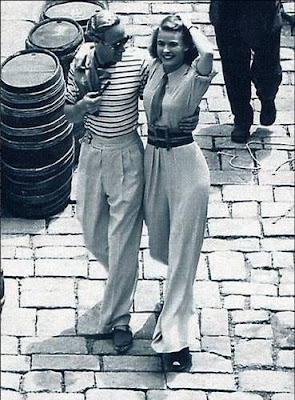