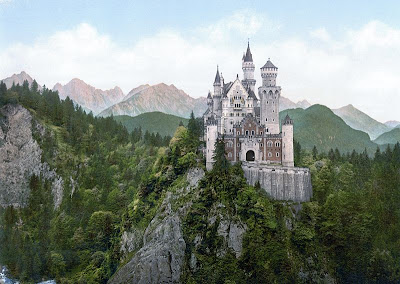 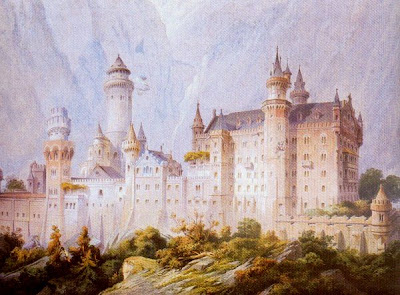 
Neuschwanstein project drawing (Christian Jank 1869)In the 19th century many castles were constructed or reconstructed, often with significant changes to make them more picturesque. Palace-building projects similar to Neuschwanstein had been undertaken earlier in several of the German states and included Hohenschwangau Castle, Lichtenstein Castle, Hohenzollern Castle and numerous buildings on the River Rhine such as Stolzenfels Castle. The inspiration for the construction of Neuschwanstein came from two journeys in 1867: One in May to the reconstructed Wartburg near Eisenach, another in July to the Château de Pierrefonds, which Eugène Viollet-le-Duc was transforming from a ruined castle into a historistic palace.

The king saw both buildings as representatives of a romantic interpretation of the Middle Ages as well as the musical mythology of his friend Richard Wagner. Wagner's operas Tannhäuser and Lohengrin had made a lasting impression on him.

In February 1868, Ludwig's grandfather Ludwig I died, freeing the considerable sums that were previously spent on the abdicated king's appanage. This allowed him to start the architectural project of building a private refuge in the familiar landscape far from the capital Munich, so that he could live his idea of the Middle Ages.


It is my intention to rebuild the old castle ruin of Hohenschwangau near the Pöllat Gorge in the authentic style of the old German knights' castles, and I must confess to you that I am looking forward very much to living there one day [...]; you know the revered guest I would like to accommodate there; the location is one of the most beautiful to be found, holy and unapproachable, a worthy temple for the divine friend who has brought salvation and true blessing to the world. It will also remind you of "Tannhäuser" (Singers' Hall with a view of the castle in the background), "Lohengrin'" (castle courtyard, open corridor, path to the chapel) [...]
Ludwig II, Letter to Richard Wagner, May 1868

The building design was drafted by the stage designer Christian Jank and realized by the architect Eduard Riedel. For technical reasons the ruined castles could not be integrated into the plan. Initial ideas for the palace drew stylistically on Nuremberg Castle and envisaged a simple building in place of the old Vorderhohenschwangau Castle, but they were rejected and replaced by increasingly extensive drafts, culminating in a bigger palace modelled on the Wartburg. The king insisted on a detailed plan and on personal approval of each draft. His control went so far that the palace has been regarded as his own creation rather than that of the architects involved.

Whereas contemporary architecture critics derided Neuschwanstein, one of the last big palace building projects of the 19th century, as kitsch, Neuschwanstein and Ludwig II's other buildings are now counted among the major works of European historicism. For financial reasons a project similar to Neuschwanstein – Falkenstein Castle – never left the planning stages.

The palace can be regarded as typical for 19th century architecture. The shapes of Romanesque (simple geometric figures such as cuboids and semicircular arches), Gothic (upward-pointing lines, slim towers, delicate embellishments) and Byzantine architecture and art (the Throne Hall décor) were mingled in an eclectic fashion and supplemented with 19th century technical achievements. The Patrona Bavariae and Saint George on the court face of the Palas (main building) are depicted in the local Lüftlmalerei style, a fresco technique typical for Allgäu farmers' houses, while the unimplemented drafts for the Knights' House gallery foretell elements of Art Nouveau. Characteristic for Neuschwanstein's design are theater themes: Christian Jank drew on coulisse drafts from his time as a scenic painter.

The basic style was originally planned to be neo-Gothic but was primarily built in Romanesque style in the end. The operatic themes moved gradually from Tannhäuser and Lohengrin to Parsifal.

In 1868, the ruins of the medieval twin castles were demolished completely; the remains of the old keep were blown up. The foundation stone for the Palace was laid on September 5, 1869; in 1872 its cellar was completed and in 1876, everything up to the first floor. But the Gatehouse was finished first. At the end of the year 1873 it was completed and fully furnished, allowing Ludwig to take provisional lodgings there and observe the further construction work. In 1874, direction of the civil works passed from Eduard Riedel to Georg von Dollmann. The topping out ceremony for the Palas was in 1880, and in 1884, the king could move into the new building. In the same year the direction of the project passed to Julius Hofmann, after Dollmann had fallen in disgrace.

The palace was erected as a conventional brick construction and later encased with other types of rock. The white limestone used for the fronts came from a nearby quarry.The sandstone bricks for the portals and bay windows came from Schlaitdorf in Württemberg. Marble from Untersberg near Salzburg was used for the windows, the arch ribs, the columns and the capitals. The Throne Hall was a later addition to the plans and required a steel framework.

The transport of building materials was facilitated by scaffolding and a steam crane that lifted the material to the construction site. Another crane was used at the construction site itself. The recently founded Dampfkessel-Revisionsverein (Steam Boiler Inspection Association) regularly inspected both boilers.


For about two decades the construction site was the principal employer of the region. In 1880, about 200 craftsmen were occupied at the site, not counting suppliers and other persons indirectly involved in the construction. At times when the king insisted on particularly close deadlines and urgent changes, reportedly up to 300 workers per day were active, sometimes at night by the light of oil lamps. Statistics from the years 1879/1880 support an immense amount of building materials: 465 t (513 short tons) of Salzburg marble, 1,550 t (1,710 short tons) of sandstone, 400,000 bricks and 2,050 m3 (2,680 cu yd) of wood for the scaffolding.

In 1870 a society was founded for insuring the workers, for a low monthly fee, augmented by the king. The heirs of construction casualties (30 cases are mentioned in the statistics) received a small pension.

In 1884 the king could move into the (still unfinished) Palas, and in 1885, he invited his mother Marie to Neuschwanstein on the occasion of her 60th birthday.[nb 5] By 1886, the external structure of the Palas (hall) was mostly finished.[31] In the same year, Ludwig had the first, wooden Marienbrücke over the Pöllat Gorge replaced by a steel construction.

Despite its size, Neuschwanstein did not have space for the royal court, but contained only the king's private lodging and servants' rooms. The court buildings served decorative, rather than residential purposes: The palace was intended to serve Ludwig II as a kind of inhabitable theatrical setting. As a temple of friendship it was also devoted to life and work of Richard Wagner, who died in 1883 before he had set foot in the building. In the end, Ludwig II only lived in the palace for a total of 172 days. 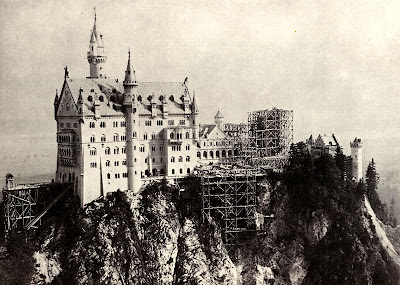 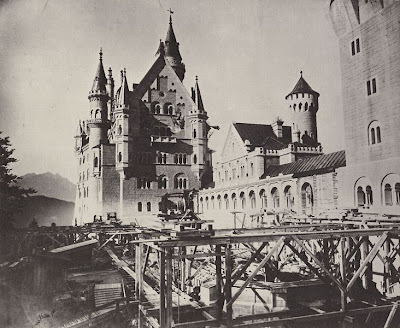 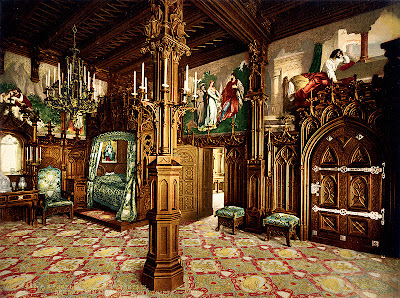 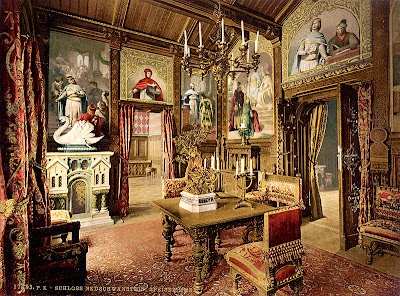 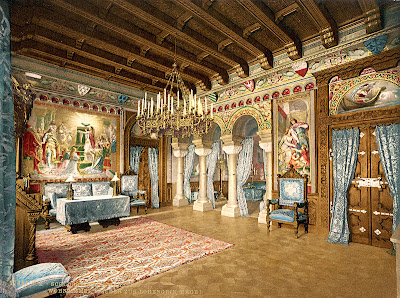 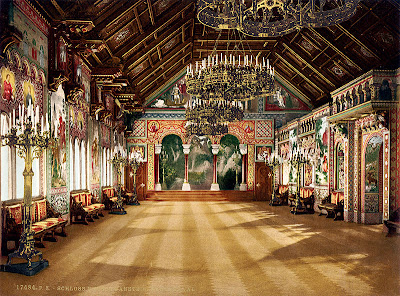 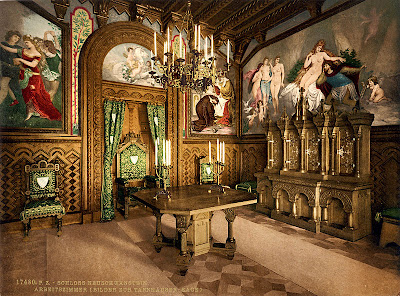 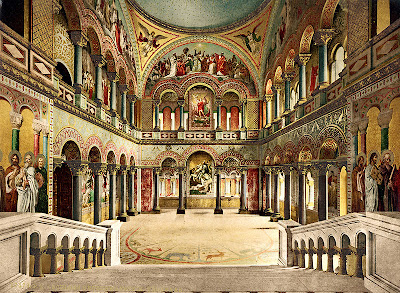 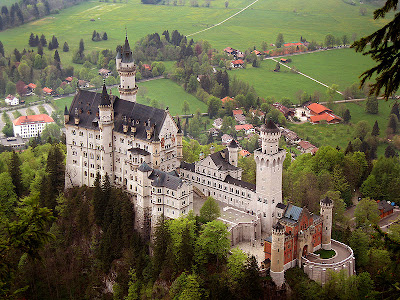