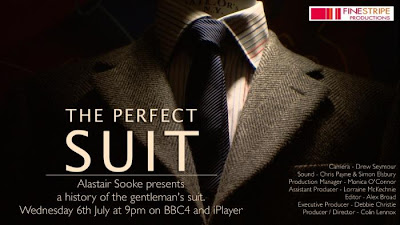 Another programme in BBC4's Luxury season, The Perfect Suit finds journalist Alastair Sooke, a man who owns just one suit and doesn't quite see what all the fuss is about, exploring the rich history of what has become the working uniform for a considerable percentage of the population. The place in the wardrobe of the gentleman's suit has changed over the past century, and here Sooke employs the expertise of tailor Charlie Allen, Topman's design director Gordon Richardson and Sir Paul Smith to explain why the British male has been so long enamoured with "the whistle". 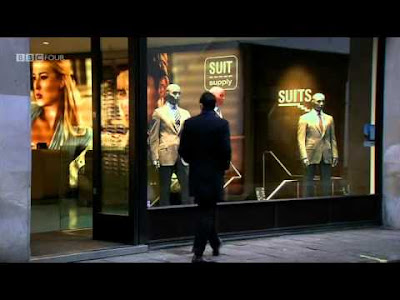 TV review: The Perfect Suit and Extreme Parental Guidance
The suit is out of fashion in slobbified Britain. Is it due for a comeback?

Alastair Sooke with fashion designer Sir Paul Smith Photograph: BBC/Finestripe Productions/Finestripe Productions
If you're not standing, please do so. Now, extend your arms downwards. Your hands should just cup the bottom of the jacket if your suit is a good fit. And if it isn't then, frankly, what are you doing reading this column? What do you mean you're not even wearing a suit? That's the problem with modern Britain. Too few people dress well. I know you're a Guardian reader but must you dress as though your clothes have been woven from half-masticated muesli?

In The Perfect Suit (BBC4) Alastair Sooke tackled the slobbification of that phenomenon that was once a byword for sartorial snazziness, the British male. The thing about a lounge suit, argued Islington tailor Charlie Allen, is that "it's modern-day armour – something you can feel comfortable in and you can fight the world in." When I visited Allen last year, he kindly let me try on a suit he was making for Arsenal's CEO and quoted me £3,500 for a similar mohair number, promising – I may have dreamed this bit – it would make me look more desirable to the ladies than Don Draper. I cycled away from that price tag and haven't stopped pedalling since.

The question of money didn't seem to cross Sooke's fetching brow, but it really should: three and a half grand is a lot of money, even for BBC4 presenters. Perhaps this is why Sooke's director whisked his presenter's skinny frame to Topman for a budget makeover. The point of a suit, argued Topman's Gordon Richardson, is "that you feel less slovenly in it, whatever the price point". Thanks to Topman you feel a lot of other things too. You feel – how to put this – your reproductive prowess retreating to oblivion as your trousers disappear up your jacksy. Richardson has created a suit for teenage insects with narrow sleeves and shoulders and terrifyingly skinny trousers. You couldn't clench your fists, still less fight the world, in that instrument of torture.

I drifted off while Sooke toured Hungarian suit-making factories. But I enjoyed his homage to Edward, Duke of Windsor, suit fetishist and some-time king who by 1966 had collected 55 suits, making him the male answer to Imelda Marcos. He, we learned, loved fashion too much to be a good king. This was an interesting spin on the 1936 constitutional crisis. I always thought that Wallis Simpson's Facebook status (divorced, but ready for another go at conjugal bliss) was the issue. What I liked about this sequence was that Rebel Rebel played in the background. Bowie's paean to an androgynous lover was marvellously inappropriate: nobody, not even the possibly louche Mrs Simpson, would ever say to the one-time King of England, "Rebel, rebel you've torn your dress. . . hot tramp, I love you so!" Though clearly that should be our national anthem: who couldn't get behind a country whose gender- unspecific monarch was a hot tramp of a clothes horse?

Enough style counsel. On to more TV lifestyle tips for us hopeless Britons. No, not that poo lady telling us what to eat, not angry alpha males telling us how to cook, or that shop makeover woman who looks so implacably smug in her diverting hair helmet, but self-styled supernanny Jo Frost. I always find myself crying before she turns up on the doorstep of some struggling mother. And so it was last night when Nicky from north London was headbutted by her six-year-old son as she put him on the time-out step.

The narrative schtick of Extreme Parental Guidance (Channel 4) was the same as previous Supernanny vehicles: emotionally manipulative footage of parents lost on the unforgiving seas of child-rearing with no sight of land, poor things; Supernanny administers tough love and/or reveals disturbing back story; wailing; problem solved. There was a new segment with Frost dispensing advice at roadshows, but that was bite-sized bossiness rather than the extreme solutions to extreme problems suggested by the misleading title.

Excuse me for not buying the programme's rhetoric of Supernanny infallibility: I worry Frost is nannying's dodgy plumber, her snap solutions springing a leak as soon as she's made her farewells. Surely raising children well is not about quick fixes, but rather long Beckettian struggles ("Ever failed. No matter. Try again. Fail again. Fail better"). But that's uncommodifiable truth, not a successful TV franchise.

You can sit now. 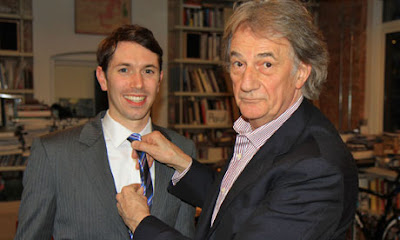