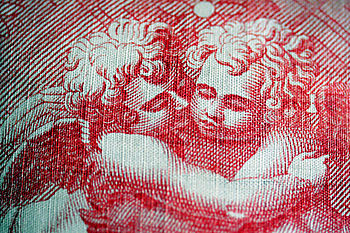 Toile de Jouy, sometimes abbreviated to simply "toile", is a type of decorating pattern consisting of a usually white or off-white background on which a repeated pattern depicting a fairly complex scene, generally of a pastoral theme such as a couple having a picnic by a lake or an arrangement of flowers. The pattern portion consists of a single color, most often black, dark red, or blue. Greens, browns, and magenta toile patterns are less common, but not unheard of. Toile is most associated with fabrics (curtains and upholstery in particular, especially chintz), though toile wallpaper is also popular. Toile can also be used on teapots, beddings, clothing, etc. In upper-class (primarily American, but also northern European) society, toile is often seen on dresses or aprons used at such events as country-themed garden parties or tea parties.
Toiles were originally produced in Ireland in the mid-18th Century and quickly became popular in Britain and France. The term, Toile de Jouy, originated in France in the late 18th century. In the French language, the phrase literally means "cloth from Jouy-en-Josas", a town of north-central France.
Although it has been continuously produced since then, it experienced a marked upsurge in popularity around the year 2000. Previously only a decorating design, designers have been recently experimenting with toile-patterned apparel as well, although toile-patterned shirts were widely worn in the 1970s.
Toiles were very popular during the Colonial Era in the United States and are highly associated with preservationist towns and historical areas, such as Colonial Williamsburg. When Williamsburg saw a repopularization in the 1930s, so did toiles, as they did again in the 1970s in celebration of the United States Bicentennial. 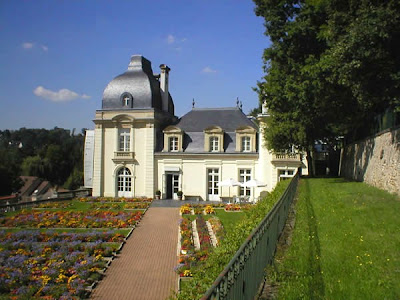 The Musée de la Toile de Jouy at Jouy-en-Josas is an ideal destination for anyone taken with wonderful fabrics and eighteenth-century history. Just a few kilometers from the Château de Versailles (though far from its tourist throngs), the museum is located at the Château d’Eglantine. While this charming setting is alone worth a visit, the museum’s interiors offer lovely rooms full of toile-covered furniture. Not only do you find here a vast collection of Toile de Jouy, the displays explain the industrialization of toile-making, particularly the printing innovations of factory founder Christophe-Philippe Oberkampf, the German immigrant who introduced to Jouy-en-Josas, the use of engraved copper plates (1770) and then copper rollers (1797), replacing the older wood blocks. 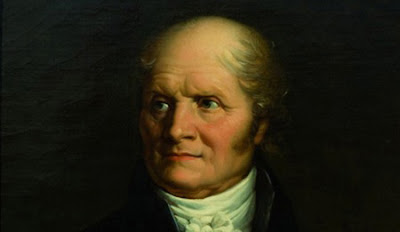 Christophe-Philippe Oberkampf
Christophe-Philippe Oberkampf (11 June 1738 – 6 October 1815) was a French naturalized German industrialist. He became famous for founding the royal manufacture of printed cottons of Jouy-en-Josas where the toile de Jouy was manufactured.
Oberkampf was born in Wiesenbach, Germany, into a family of dyers. He traveled to educate himself and initially worked in Mulhouse as an engraver, then from October 1758 in Paris as a colourist.

In 1759, Oberkampf proposed a partnership with the Swiss for the creation of a manufacture of cottons printed with engraved wood boards in Jouy-in-Josas. The first fabrics were successfully printed in May 1760. In 1764, Oberkampf increased his factory to a vast area of 18,000 m². The number of employees grew quickly and reached 900 workmen in 1774.
In 1770, Oberkampf who had then lived in France for ten years, was made a naturalised French citizen, along with his brother. Around this period, an important technical evolution enabled his company to considerably increase its production: the wooden boards were replaced with copper plates, also engraved, but flexible and able to be fixed on cylindrical drums. The company entered the era of mechanisation.
1780s–1790s
In 1783, the factory received from king Louis XVI of France the title of "royal manufacturer" and in 1787, Oberkampf received from the king the title of squire as well as the right to use arms and his device "Recte et vigilanter (uprightness and vigilance)".
In 1785 Oberkampf invented the first machine for printing wallpaper, and shortly afterwards, Nicolas-Louis Robert designed a process for manufacturing endless rolls of wall-paper.
On February 7, 1790, the reforms of the French Revolution led him to be appointed mayor of Jouy-en-Josas. In 1794 his daughter Émilie was born. Influenced by the British Infant Schools, she would become the pioneer of the nursery school.
The factory continued to flourish during the Revolution and became the second company of the kingdom after the mirror manufacture of Saint-Gobain. In 1799, sales declined and the manpower – which had reached 2,000 workers – was reduced.
1800s
In 1806, Oberkampf won a gold medal at the industrial fair of the Louvre for its eminent role in the manufacture of painted Toiles. On June 20, 1806, after visiting the workshops, Napoleon, awarded him the legion of honor.
Decrease in the demand and competition got more insistent. In 1815, manpower fell to 435, and the manufacture was closed during the invasion of the armies united against the Emperor.

When Oberkampf died in 1815 in Jouy-en-Josas (today in Yvelines), his son Emile succeeded him as the head of the company. Taken over by Jacques-Juste Barbet de Jouy in 1822, it finally went bankrupt in 1843. Oberkampf was buried in the garden of his house, which today houses the Music Academy of Jouy-in-Josas.
Oberkampf's name was given to a Rue Oberkampf in XIth district of Paris, and to the Oberkampf subway station that serves it. 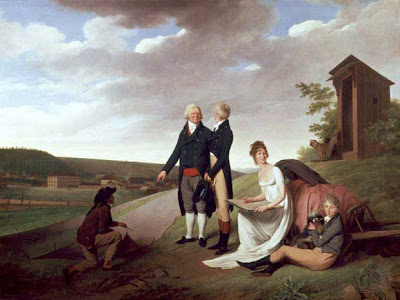 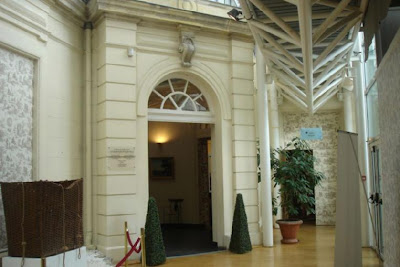 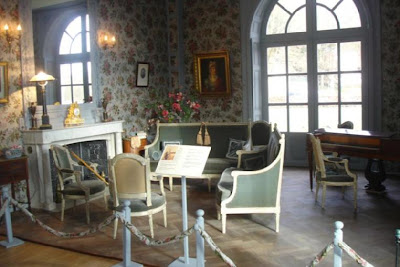 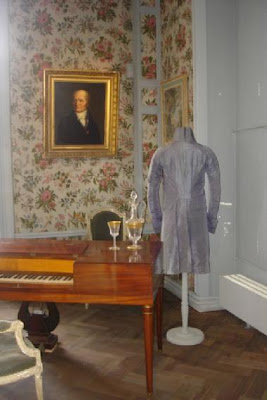 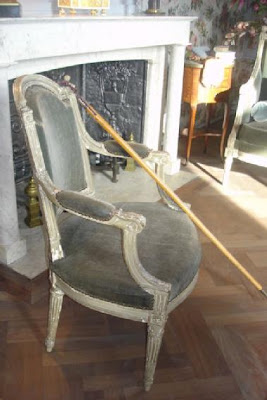 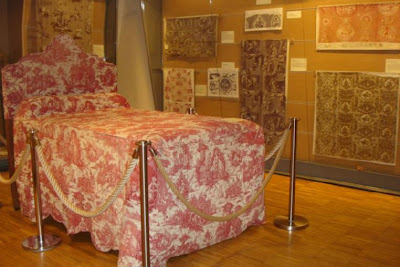 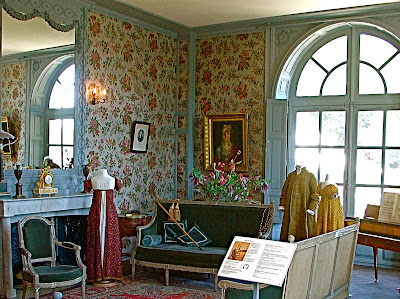 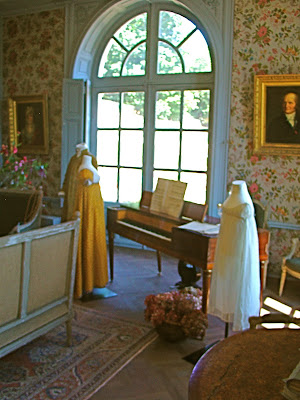 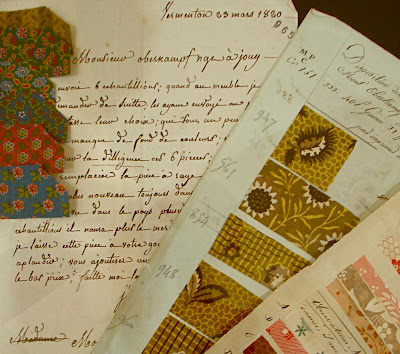 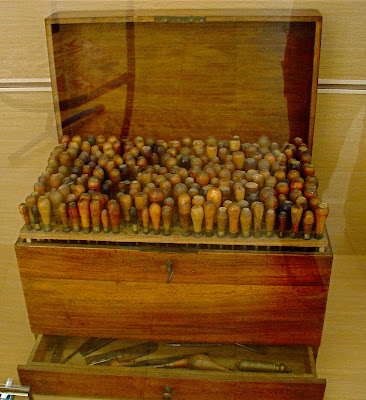 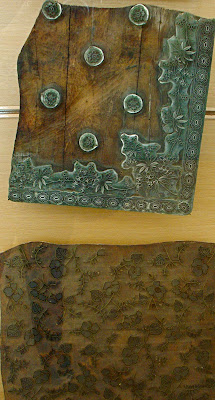 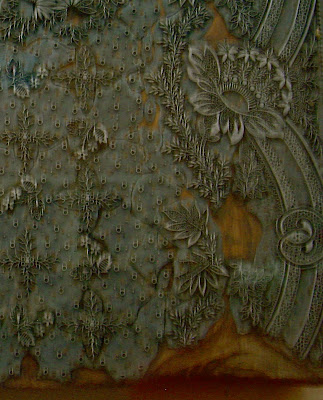 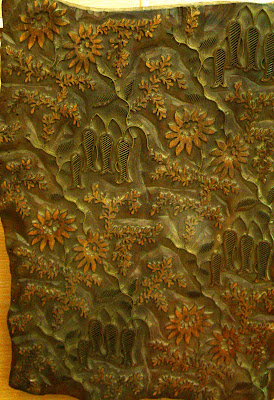 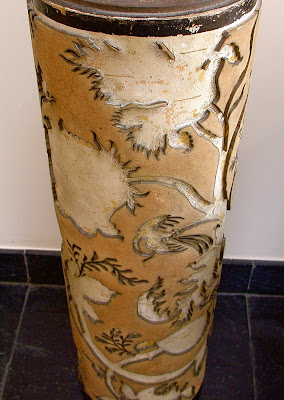 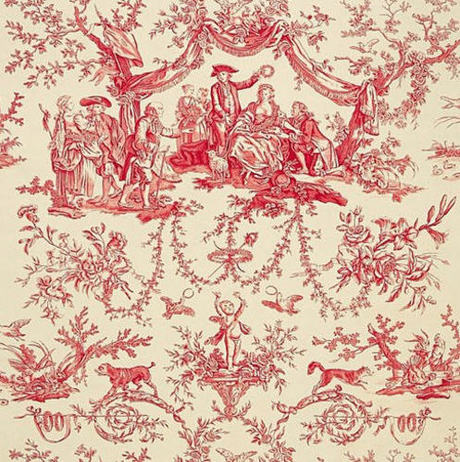 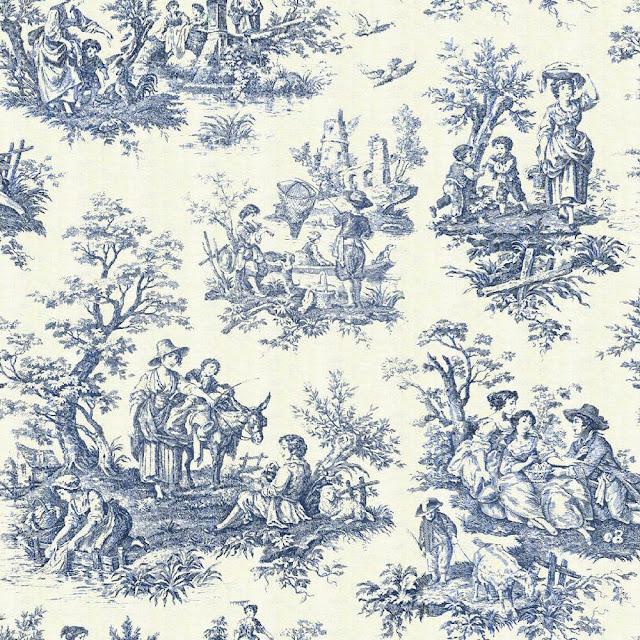 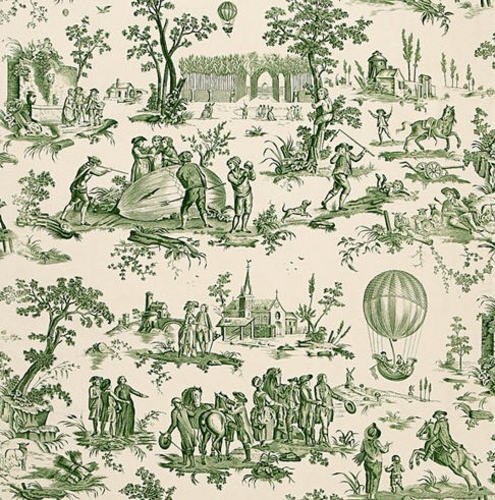 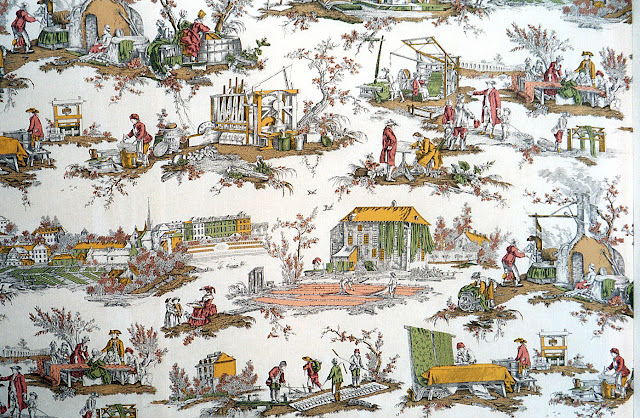 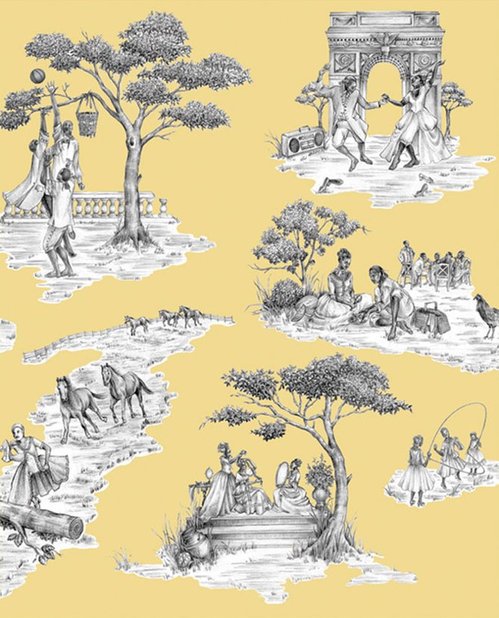 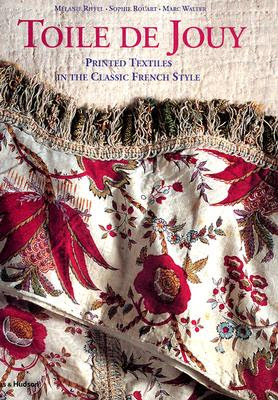 Recently there has been an explosion in the popular applications of toile de Jouy's monochromatic patterns. You can buy anything from a dog bed to a light switch cover embellished with this venerable fabric. Although it may seem faddish, toile de Jouy has been a classic decorating choice for almost 250 years never falling out of favor.
A recently published book, Toile de Jouy: Printed Textiles in the Classical French Style brings focuses on the interesting history of this enduring fabric decorating staple. Toile de Jouy includes hundreds of vibrant color photographs gathering together antique fabrics, pattern sketchbooks, block prints, period clothing, and period soft furnishings. The photographs capture the amazing monochromatic fabric designs that we are familiar with, historical tributes, literary themes, everyday scenes, and bucolic country life. There are also fabrics that we are not likely to associate with toile de Jouy; blazing or muted multicolored florals and geometrics. Toile de Jouy also educates the reader about historical textile production, design, and the history of France during difficult political times.

The Manufacture Royale de Jouy, which produced these fine fabrics, opened for business in 1760 with just three employees. During it's 83 years in business The Manufacture Royale de Jouy accomplished the Herculean task of creating and printing 30,000 patterns. Famous artists of the day were courted to produce patterns and they accepted because the work had high visibility and was well paid. So popular were the fabrics that the annual receipts made it the second largest factory in France.

Always a fine and expensive product, toile was personally selected by Marie Antoinette and Napoleon for interior decoration in their palaces and stately homes. To attest to the brilliance and timeless character of the original designs many are still available from contemporary suppliers such as Pierre Frey, Brunschweig and Fils, Maison Georges Le Manach, Casal-Amelie Prevot, Braquenie, and other manufacturers.
By Manon Kavesky in Amazon

Have you heard of Timorous Beasties?

Their London Toile is worth a closer look, a playful subversion of an old theme, but it don't come cheap mind.