News that top name Huntsman has been acquired by Roubi L'Roubi stole the thunder at a splendid Savile Row presentation – which in itself stole the limelight from surrounding events - during the London menswear shows (Jan 7 -9).
Roubi L’Roubi has been well known to Savile Row Style since we first featured him in 2009 as a highly talented designer and craftsman. Now, with his partner, Pierre Langrange (seen far right with Roubi), he is the owner of Huntsman.
“I’m so excited,” Roubi told us, just prior to the announcement being made. “It has taken some months of negotiations. Now it is a dream come true.”


FUTURE PLANS
It is understood that general manager Peter Smith and head cutter Patrick Murphy are to remain. The  Huntsman name will henceforth
embrace Roubi’s women’s couture business, based in Bond Street.  Roubi will work closely with the Huntsman team to develop, present and market the brand.
“We will be presenting a collection of styles, so that customers can see what they might have.
"I strongly believe this helps bespoke customers have an idea of what they want and what they don’t want. It is what we have done with our women’s couture – present a collection that provides inspiration.” 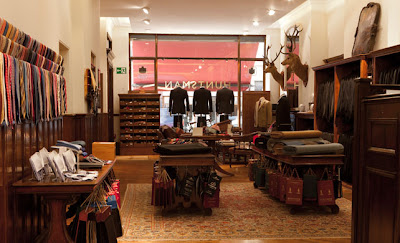 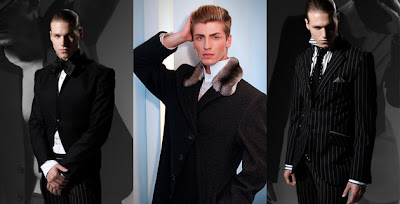 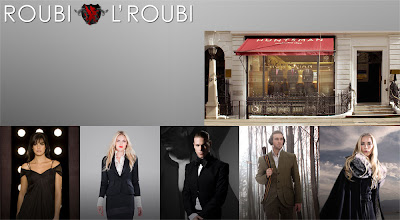 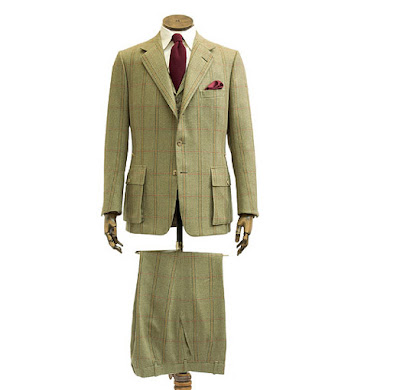 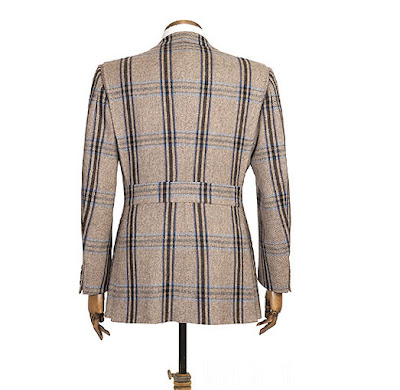 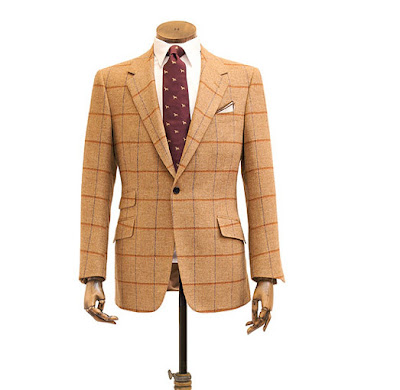 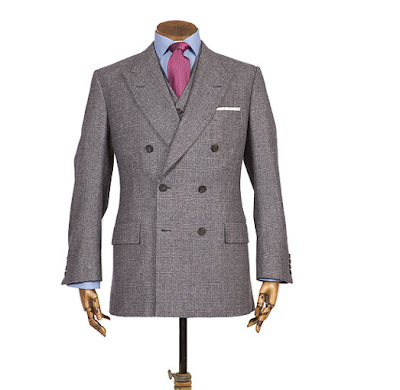 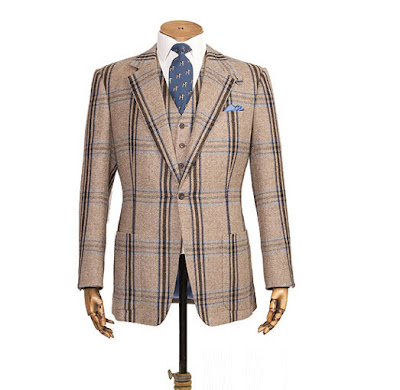 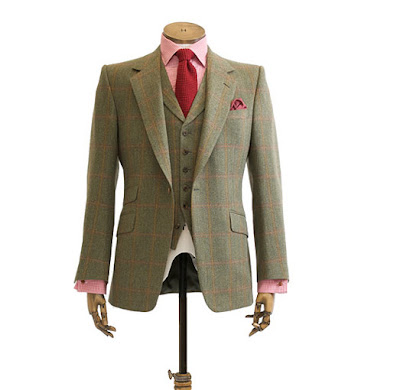 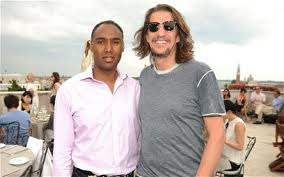 Hedge fund boss faces £160m divorce settlement after leaving wife for male fashion designer
One of Britain’s wealthiest men is facing a huge divorce settlement after separating from his wife and starting a relationship with a flamboyant male fashion designer.
By Heidi Blake 05 Sep 2011 in The Telegraph/ http://www.telegraph.co.uk/news/uknews/8741143/Hedge-fund-boss-faces-160m-divorce-settlement-after-leaving-wife-for-male-fashion-designer.html

Pierre Lagrange, a hedge fund manager worth an estimated £331 million, left his wife Catherine and three children before starting a relationship Roubi L’Roubi, a Mayfair-based haute couture designer whose commissions include creating vestments for clergy at St Paul’s Cathedral.
His estranged wife, who has donated £150,000 to the Conservative Party, is thought to be in line for a settlement of more than £160 million after the couple filed divorce papers in the family division of the High Court last month.
Mr Lagrange sold his £90 million home in Kensington Palace Gardens to Roman Abramovich, the Chelsea owner, ahead of the hearing.
The 49-year-old Belgian-born financier co-founded the GLG hedge fund operation, criticised for short-selling shares in the stricken Bradford & Bingley bank at the height of the financial crisis.
The former Goldman Sachs trader also made millions by investing with Ryan Giggs, David Beckham and Gary Lineker in a fund that financed the 3D film Avatar. 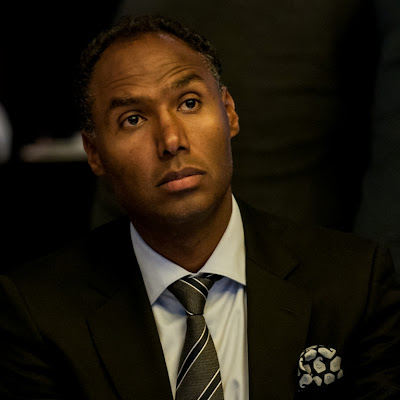 ROUBI PROFILE in http://www.h-huntsman.com/roubi-lroubi
Roubi L’Roubi is a London couturier who brings together the best traditions of Savile Row and Bond Street. Renowned for his soft, meticulous tailoring and dressmaking, his expertise in fitting and design has seen him in demand as for both mens’ and ladies’ tailoring, country and shooting attire, and ladies’ evening wear. In December 2012, Mr L’Roubi became the Co-Owner and Creative Director of Huntsman, the iconic Savile Row brand.
Roubi L’Roubi is uniquely qualified to take the helm at Huntsman. He has already worked with some of the most iconic British luxury firms, including Holland and Holland, for whom he designed a range of ladies sporting tweeds, and for Henry Poole, the Savile Row tailor with whom he collaborated on woman’s tailoring. Savile Row also invited him to be a judge at the prestigious Golden Shears Awards for young tailoring talent in 2011. “I am delighted at the opportunity to be able to learn from the incredibly talented team at Huntsman”, said Mr L’Roubi. At the same time, I will be able to share the expertise that I have developed in women’s bespoke.”
With the continuing support of the existing Huntsman team, including Peter Smith, General Manager, and Patrick Murphy, Head Cutter, Roubi L’Roubi’s vision is to maintain the uniquely traditional silhouette and immaculate mens’ tailoring for which the house is famous. His womenswear expertise with its insistence on achieving a perfect fit, will also allow Huntsman to further develop their complementary ladies’ tailoring offer. It is the intention that Mr L’Roubi’s own Bond Street couture business will be evolved into the Huntsman label.
Dovetailing neatly into the Huntsman tradition is Roubi L’Roubi’s expertise as a designer of sporting clothing. Here, he brings into play his experience as a keen dressage rider, and time spent at the peg on some of the country's best shoots. His sporting tweeds and country clothes display a close functional understanding of the ergonomics of movement, essential for comfort and style in a suit that is worn all day in the field.
Mr L’Roubi’s work has also been well received on the international stage. In 2007 he designed costumes for the prestigious Ichikawa Kabuki actors in Tokyo. Recently accepted into the Hollywood Guild of Costume Designers, Roubi L’Roubi’s film credentials will be further endorsed with the 2013 release of ‘Nina’. His exquisite period designs for Zoe Saldana will take centre stage as she plays the lead in this biopic celebrating the life of singer Nina Simone.
Roubi L’Roubi’s love of design is informed by his degree in Mechanical Engineering earned at Imperial College in London. An understanding of structure and craftsmanship acquired here has proved an excellent foundation for his career in tailoring and couture. After starting his career with Joseph Ettedgui in South Kensington, he went on to launch his own label in 2004.
Over the past twenty years, Roubi L’Roubi has collaborated with some of the best known names in the industry. His love of baroque music has led him to design robes for the clergy at St Paul’s cathedral and for the opera singers Claire Rutter, Stephen Gadd, the Handel Players, and for the conductor, Lawrence Cummings as well as the ENO’s Spring Opera Gala. Mr L’Roubi is an accomplished painter and ceramicist.
Roubi lives with his partner Pierre Lagrange and their family, with time shared between their homes in London, Hampshire and New York. Pierre is the Co-Owner of Huntsman with Roubi.