ABBOTSFORD. The Queen has reopened Abbotsford, Sir Walter Scott's home in the Borders 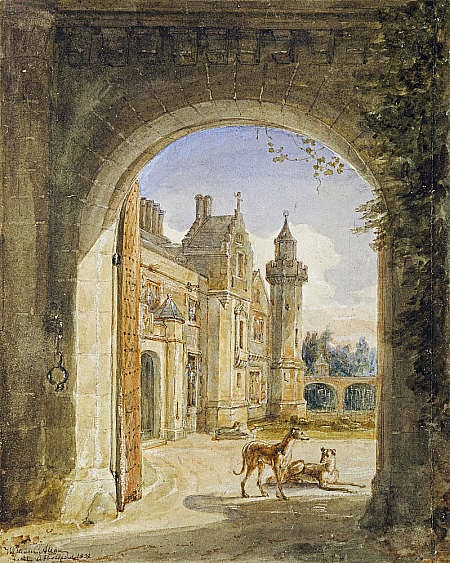 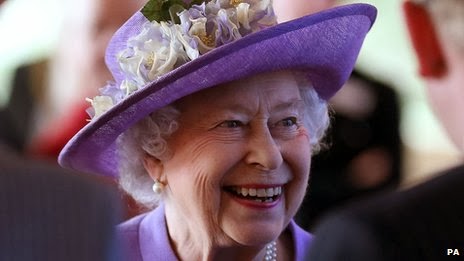 In his day, Walter Scott did more than anyone to bind Scotland and the monarchy, so it is fitting the Queen should reopen his home, Abbotsford
By Allan Massie / 04 Jul 2013 /  http://www.telegraph.co.uk/news/uknews/scotland/10159985/The-Queen-keeps-Scotts-majesty-alive-in-the-Borders.html

Sir Walter Scott died in September 1832, and was buried in the ruined Dryburgh Abbey. One hundred and fifty years later, a service of commemoration was held there. We had recently come to live in the Borders and went along, taking our black labrador, Smith, with us. As the congregation dispersed, two ladies approached and one said, “ You’ve brought your dog. Quite right too! Sir Walter would have been delighted.” They were Patricia and Jean Maxwell-Scott, Sir Walter’s great-great-great granddaughters, who still lived in the house he had built, his beloved Abbotsford, and cared for both the house and his memory devotedly.
In time they died, first Patricia and then Dame Jean, and nobody knew what was to become of Abbotsford, for there was no other family member able to shoulder the cost of its upkeep. Abbotsford had long been open to the public, but visitor numbers had fallen from a high of around year to little more than 30,000. Moreover, the building required extensive structural repairs.
Eventually, the executors of Dame Jean’s estate formed a trust. They needed £10 million for the work and for the construction of a visitor centre, and another £3 million for an endowment, so that, as Andrew Douglas-Home, one of the trustees, explained to me, Abbotsford could be self-financing and “not a burden on the public purse”.
The money for the work was raised, but they are still £2.4 million short of the sum needed for the endowment. Nevertheless the work has been done. The house, both the part built by Scott himself and the Victorian wing added by his granddaughter and her husband Sir James Hope-Scott, is now in prime order; and the visitor centre, which offers an interpretation of Scott’s life and work, along with a coffee bar and fine restaurant, has been built. It’s a tremendous achievement.
On Wednesday, Abbotsford was formally and appropriately reopened by Her Majesty the Queen. Formally, because formality is right on such occasions, and the Queen was attended by members of her bodyguard in Scotland, the Company of Archers, whose forest-green uniform was designed by Scott himself; appropriately, because the Queen in her youth had been a guest of Patricia and Jean at Abbotsford, and because Scott, by organising the visit of George IV to Scotland in 1822, the first time a reigning monarch had come north since the 17th century, had done more than anyone to bind Scotland and the monarchy together.
So it was a splendid and happy occasion, a blend of formality and informality as is our style in the Borders. There were some 550 guests, all local, and the mix was eclectic, ranging from a duke and a marquis, Knights of the Thistle, a sprinkling of politicians and such like, to mere scribblers. The young men who this summer carry the standard in the Common Ridings of Selkirk, where Scott was sheriff, and Galashiels and Melrose, were among those present. Sir Walter would have approved of that, too.
Abbotsford matters. It matters obviously to the Borders, and not only as the region’s prime tourist attraction. It matters to Scotland because Scott is our greatest writer, and knowing Abbotsford helps you to get to know and understand him. It matters to the United Kingdom because Scott was a British, as well as Scottish, patriot, who wrote of England as “our sister and ally”, and because his cultural influence throughout the Victorian Age was immeasurable – Kenneth Clark called the Houses of Parliament “a Waverley novel in stone”. It matters to the world because Scott was “the father of the European novel”.
Finally, it matters because his rich and complicated spirit still seems to breathe there. You come close to Walter Scott as you stroll through the rooms where he lived and worked. Patricia and Jean, who cared so tenderly for the house and his memory, can rest happy. 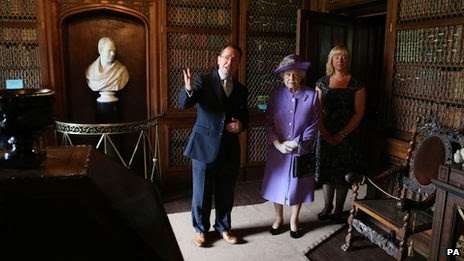 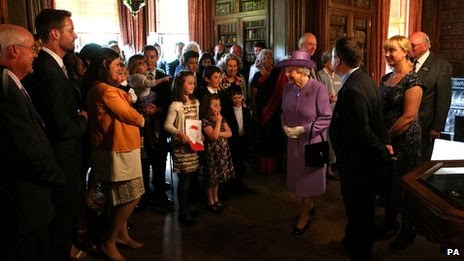 Last orders for the restaurant one hour before closing time
Admission: Free

Abbotsford is a historic country house in the Scottish Borders, at the town of Galashiels, near Melrose, on the south bank of the River Tweed. It was formerly the residence of historical novelist and poet, Walter Scott(Sir Walter Scott,Bt). It is a Category A Listed Building.

The nucleus of the estate was a small farm of (0.40 km2), called Cartleyhole, nicknamed Clarty (i.e., muddy) Hole, and was bought by Scott on the lapse of his lease (1811) of the neighbouring house of Ashestiel. He first built a small villa and named it Abbotsford, creating the name from a ford nearby where previously abbots of Melrose Abbey used to cross the river. Scott then built additions to the house and made it into a mansion, building into the walls many sculptured stones from ruined castles and abbeys of Scotland. In it he gathered a large library, a collection of ancient furniture, arms and armour, and other relics and curiosities, especially connected with Scottish history, notably the Celtic Torrs Pony-cap and Horns and the Woodwrae Stone, all now in the Museum of Scotland.
The last and principal acquisition was that of Toftfield (afterwards named Huntlyburn), purchased in 1817. The new house was then begun and completed in 1824.

Ground plan of Abbotsford House.
The general ground-plan is a parallelogram, with irregular outlines, one side overlooking the Tweed; and the style is mainly the Scottish Baronial. Into various parts of the fabric were built relics and curiosities from historical structures, such as the doorway of the old Tolbooth in Edinburgh.
Scott had only enjoyed his residence one year when (1825) he met with that reverse of fortune which involved the estate in debt. In 1830 the library and museum were presented to him as a free gift by the creditors. The property was wholly disencumbered in 1847 by Robert Cadell, the publisher, who cancelled the bond upon it in exchange for the family's share in the copyright of Sir Walter's works.
Scott's only son Walter did not live to enjoy the property, having died on his way from India in 1847. Among subsequent possessors were Scott's son-in-law, John Gibson Lockhart, J. R. Hope Scott, QC, and his daughter (Scott's great-granddaughter), the Hon. Mrs Maxwell Scott.

The house was opened to the public in 1833, but continued to be occupied by Scott's descendants until 2004. The last of his direct descendants to inhabit Abbotsford was his great-great-great-granddaughter Dame Jean Maxwell-Scott (8 June 1923 - 5 May 2004). She inherited it from her elder sister Patricia in 1998. The sisters turned the house into one of Scotland's premier tourist attractions after they had to rely on paying visitors to afford the upkeep of the house. It had electricity installed only in 1962. Dame Jean was at one time a lady-in-waiting to Princess Alice, Duchess of Gloucester, patron of the Dandie Dinmont Club, a breed of dog named after one of Sir Walter Scott's characters; and a horse trainer, one of whose horses, Sir Wattie, ridden by Ian Stark, won two silver medals at the 1988 Summer Olympics in Seoul, South Korea.
Scottish Borders Council is considering an application by a property developer to build a housing estate on the opposite bank of the River Tweed from Abbotsford, to which Historic Scotland and the National Trust for Scotland object.
Sir Walter Scott rescued the "jougs" from Threave Castle in Dumfries and Galloway and attached them to the castellated gateway he built at Abbotsford.

As Sheriff-Depute of Selkirkshire, Scott needed to spend part of the year in easy reach of the courtroom in Selkirk, so he spent legal terms in Edinburgh and legal vacations in the country. For a few years he rented a house at Ashestiel from a cousin, but in 1811 he bought his own ‘mountain farm’, as he described it, ‘on a bare haugh and bleak bank by the side of the Tweed’. It was called Newarthaugh on the deeds, but was Cartleyhole (and sometimes ‘Clarty Hole’) to local people. He immediately renamed it Abbotsford, after the ford across the Tweed below the house used in former times by the monks of Melrose Abbey.

Scott was in such a hurry to turn his bare bank into a paradise that he was already planting trees before taking full possession in May 1811. The existing farmhouse was small for a man with four children. Nevertheless, Scott’s first priority was not to enlarge the house but to acquire more land from his neighbours. With money flowing in from his poetry and early novels, he was able within a few years to expand the estate from to 1400. At the same time he made some small improvements to the house, most of which were swept away by later stages of building. The stables which he built still survive, but not the kitchen, laundry and spare rooms housed in a building across the courtyard.

At no time was there a grand plan for the creation of Abbotsford. Scott’s initial intention was to keep the Cartleyhole farmhouse and add a few rooms to give his family more space. Abbotsford was not to be a mansion. Rambling, whimsical and picturesque were the expressions he used at different times to describe it.

So he filled in the courtyard to the west of the farmhouse with a Study, a Dining Room, an Armoury (which he referred to as his ‘Boudoir’) and a conservatory; the last of these has since been demolished. On the floors above there were two bedrooms, three dressing-rooms and three attic rooms. Below the main rooms were basement kitchens with windows looking out towards the Tweed. The new Dining Room was first used on the 8th of October 1818, but for dancing rather than dinner, as the carpentry work was still in progress.

Several professional architects, craftsmen, dilettante designers and friends contributed ideas and sketches. These included the architect Edward Blore, the cabinet-maker George Bullock and Scott’s friends, the artist James Skene and the actor Daniel Terry. But the principal architect was William Atkinson, who was responsible later for the remodelling of Chequers in Buckinghamshire. The building firm for the first phase at Abbotsford was Sanderson & Paterson of Galashiels. The interiors were decorated by David Ramsay Hay of Edinburgh, who later redecorated the Palace of Holyroodhouse for Queen Victoria.

By 1818 Scott was already talking of adding a library. Money continued to pour in from his writing and he took the opportunity of lengthy visits to London in 1819 and 1820 to discuss plans for a new phase of building work with Atkinson. The old farmhouse was to be demolished to make room for a large rectangular building housing an Entrance Hall, a new Study, a Library  and a Drawing Room. John Smith of Darnick, a local stonemason, was eventually hired as the principal builder and Scott again acted as his own clerk of works. Windows, doors and woodwork were manufactured in London and much of the furniture and furnishings were acquired there too, either from Bullock’s workshop or from purchases made on Scott’s behalf by Daniel Terry. The cottage was pulled down in January 1822 and the new library, though not quite complete, was ready enough to be used as the venue for a Christmas ball in 1824. The drawing room too was in use for some time before the fireplace was installed and its distinctive, hand-painted wallpaper from China was hung.
In http://www.scottsabbotsford.com/visit/the-house/ 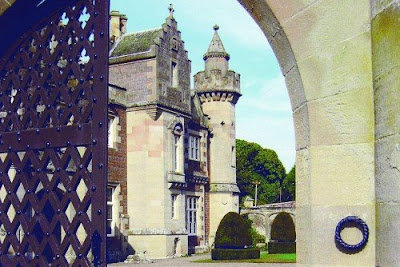 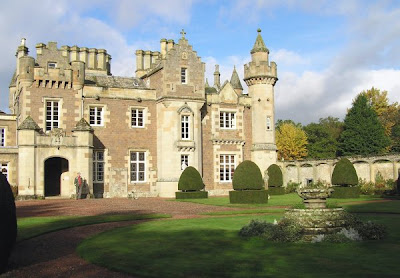 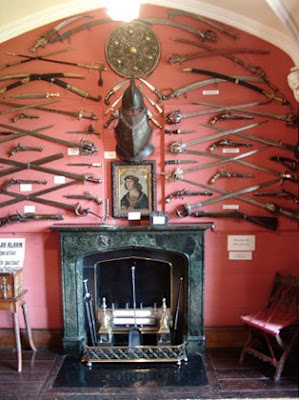 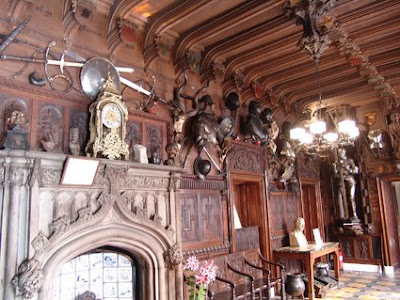 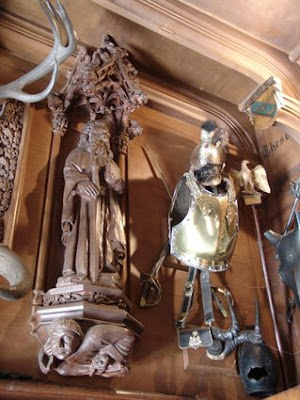 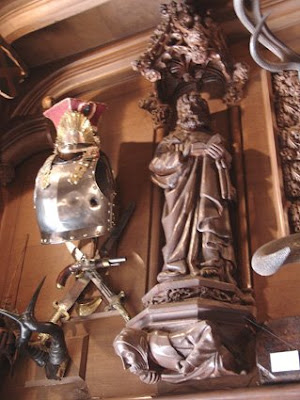 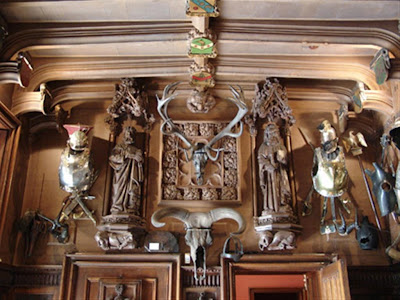 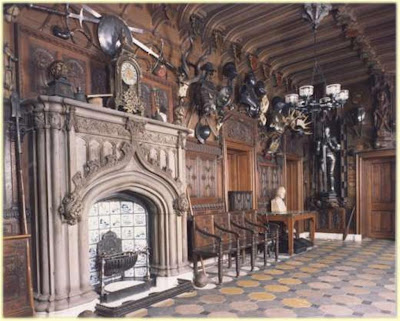 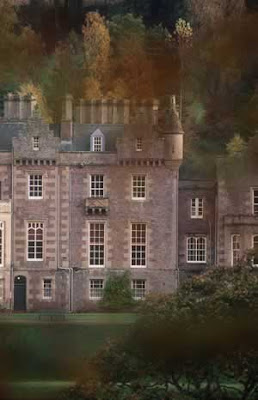 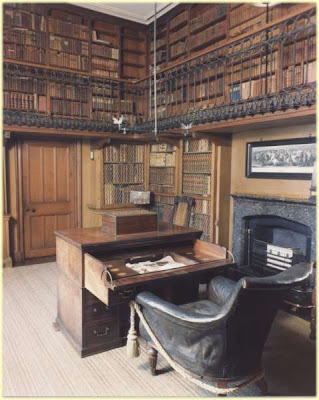