Mad, Bad and Dangerous to Know: The Extraordinary Exploits of the British and European Aristocracy by Karl Shaw / London in the Eighteenth Century: A Great and Monstrous Thing by Jerry White 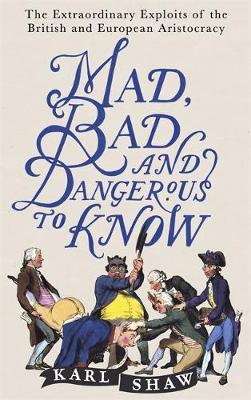 Mad, Bad and Dangerous to Know: The Extraordinary Exploits of the British and European Aristocracy
by Karl Shaw

The alarming history of the British, and European, aristocracy - from Argyll to Wellington and from Byron to Tolstoy, stories of madness, murder, misery, greed and profligacy.
From Regency playhouses, to which young noblemen would go simply in order to insult someone to provoke a duel that might further their reputation, to the fashionable gambling clubs or 'hells' which were springing up around St James's in the mid-eighteenth century, the often bizarre doings of aristocrats.
An eighteenth-century English gentleman was required to have what was known as 'bottom', a shipping metaphor that referred to stability. Taking part in a duel was a bold statement that you had bottom. William Petty, 2nd Earl of Shelburne certainly had bottom, if not a complete set of gonads following his duel with Colonel Fullarton, MP for Plympton. Both men missed with their first shots, but the colonel fired again and shot off Shelborne's right testicle. Despite being hit, Shelborne deliberately discharged his second shot in the air. When asked how he was, the injured Earl coolly observed his wound and said, 'I don't think Lady Shelborne will be the worse for it.'
The cast of characters includes imperious, hard-drinking and highly volatile Danish astronomer Tycho Brahe, who is remembered today as much for his brilliant scientific career as his talent for getting involved in bizarre mishaps, such as his death as a result of his burst bladder; the Marquess of Queensberry, a side-whiskered psychopath, who, on a luxury steamboat in Brazil, in a row with a fellow passenger over the difference between emus and ostriches, and knocked him out cold; and Thomas, 2nd Baron Lyttelton, a Georgian rake straight out of central casting, who ran up enormous gambling debts, fought duels, frequented brothels and succumbed to drug and alcohol addiction.
Often, such rakes would be swiftly packed off on a Grand Tour in the hope that travel would bring about maturity. It seldom did.
https://www.amazon.co.uk/Mad-Bad-Dangerous-Know-Extraordinary/dp/1472136691 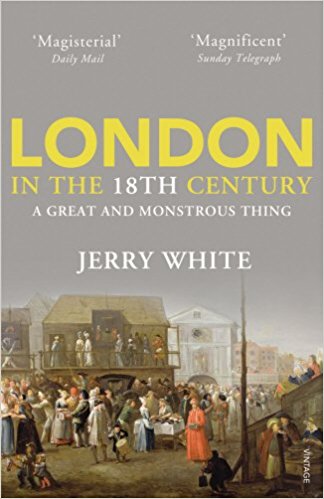 London in the eighteenth century was very much a new city, risen from the ashes of the Great Fire. With thousands of homes and many landmark buildings destroyed, it had been brought to the brink. But the following century was a period of vigorous expansion, of scientific and artistic genius, of blossoming reason, civility, elegance and manners. It was also an age of extremes: of starving poverty and exquisite fashion, of joy and despair, of sentiment and cruelty. Society was fractured by geography, politics, religion and history. And everything was complicated by class. As Daniel Defoe put it, London really was a 'great and monstrous Thing'.


Jerry White's tremendous portrait of this turbulent century explores how and to what extent Londoners negotiated and repaired these open wounds. We see them going about their business as bankers or beggars, revelling in an enlarging world of public pleasures, indulging in crimes both great and small - amidst the tightening sinews of power and regulation, and the hesitant beginnings of London democracy.
In the long-awaited finale to his acclaimed history of London over 300 years, Jerry White introduces us to shopkeepers and prostitutes, men and women of fashion and genius, street-robbers and thief-takers, as they play out the astonishing drama of life in eighteenth-century London.
https://www.amazon.co.uk/London-Eighteenth-Century-Great-Monstrous/dp/0712600426 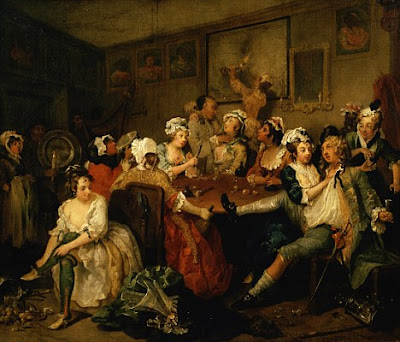 London in the Eighteenth Century: A Great and Monstrous Thing by Jerry White – review
Jerry White's study of Georgian London depicts a city teeming with sex and violence

Britain and London are virtually synonymous in the eyes of the world. The eve of the Olympics is a good time to go back to the century that saw the making of Britannia and the London we walk and live in today. Jerry White's history of 18th-century London is the culmination of two previous volumes about London in the 19th and 20th centuries. This new book finds him inspired by the city that Daniel Defoe identified as "this great and monstrous Thing called London".

In 1700, it was divided, in separations that linger, into three: the City (London), the court (Westminster and St James's) and south of the river (Southwark). The essayist Joseph Addison, in 1712, looked on it as "an aggregate of various nations distinguished from each other by their respective customs, manners an interests". In 1700, its population numbered about half a million, swelling to approximately 750,000 by 1750 and roughly a million by 1800. By contrast, England's second city, Bristol, had scarcely 30,000 inhabitants.

London was not just staggeringly larger than anywhere else, it was also a vivid new metropolis, much of it in soft pink brick. The Great Fire of 1666 had left more than half of the old city in smouldering ruins. After the union with Scotland, the capital became the outward sign of British prosperity and self-confidence. And the people most attracted to it, for its teeming opportunities, were the Scots.

Georgian London became a Scottish city. Its main architect, James Gibbs, was Scottish. So was the circle that formed around the young George III. That great Londoner, Samuel Johnson, loved to goad the Scots, but his amanuensis, James Boswell, was one himself, and so were five of the six assistants on his famous Dictionary. Scots in the capital often attracted hostility. When officers in highland dress appeared at Covent Garden, the upper gallery yelled: "No Scots! No Scots!" and pelted them with apples.

In other ways, Britannia's London was more extreme but not so different from our own: prey to rioting, seething with sex and violence. Visitors to London, appalled by the atmosphere, also noted what one described as "the vast number of harlots" roaming the streets by night. London was the sex capital of Europe, but hardly uplifting. "She was ugly and lean," wrote James Boswell of one encounter in the park, "and her breath smelt of spirits. I never asked her name. When it was done, she slunk off."

White's account is not exactly new. Much of this book reads like an animated Hogarth cartoon. But he has uncovered a wealth of evidence to sustain a portrait of a society revelling in money and pleasure in ways that recall the excesses of the 1980s.

Contemporaries saw the city as a marketplace for every kind of trade. In the mixing of vice and fashion, there were remarkable social consequences at work, too. White argues persuasively that historians have paid insufficient attention to the role of prostitution in the rise of democracy. It's a pleasing picture that while the women of the town flirtatiously dissolved the bonds of deference, London became a democratic crucible.

But there was a dark side. "Crime and criminals," says White, "knew no bounds of rank in 18th-century London." Suicide was common, executions a public spectacle. Violent property crime rose. In 1780, with the outbreak of the Gordon riots, London seemed on the brink of civil war.

In early June, the mob attacked 10 Downing Street and then moved on to batter the city's prisons, destroying Newgate. It has been calculated that these riots destroyed 10 times more property than was destroyed in Paris during the entire French revolution.

The repression of the 1790s was the response of an establishment reasserting state control. The French revolution and the wars that followed loosened the city's devotion to popular democracy and brought merchants and courtiers from the east and west ends into a loyal alliance behind the throne. London had become the world capital it remains today. 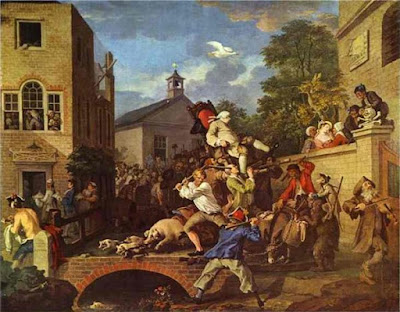