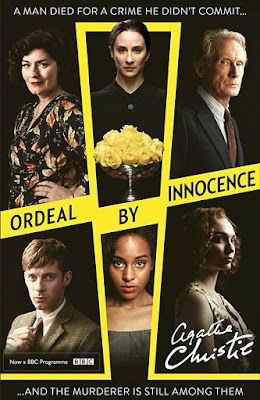 Ordeal by Innocence is a three part BBC drama that was first broadcast during April 2018. It is based on the Agatha Christie novel of the same name and is the third English language filmed version to be broadcast. The drama stars Bill Nighy, Anna Chancellor, Alice Eve and Eleanor Tomlinson amongst others.
The show was originally intended to be broadcast as part of the BBC Christmas programming but was held back initially due to one of the actors being accused of sexual assault.

Set in 1956, the programme opens with the death of Rachel Argyll, a wealthy heiress who with her husband, Leo Argyll, have adopted five children as they cannot have their own. Initially, son Jack Argyll is accused and awaits trial in prison before he himself is killed at the hands of another prisoner. Eighteen months later and the family is gearing up for a wedding; Leo Argyll is due to marry the Argyll family's former secretary, Gwenda Vaughn, when a mysterious stranger arrives at the door claiming to have an alibi for Jack for the night of the murder. The stranger, Dr Calgary, is unaware that Jack is dead and has come back to help get Jack released from jail. Because the family has received many visits from fraudsters claiming to be Jack's alibi, Dr Calgary's testimony is coldly received, and he is told in no uncertain terms to leave the family alone.

Dr Calgary is then threatened by the other son, Mickey Argyll, but is courted by Philip Durrant, the disabled husband of Mary who sees Dr Calgary as a cash cow. Dr Calgary is awash with disbelief, but telephones Leo Argyll and tells him that his wife's murderer is still on the loose.

Differences to the novel
Just like many other novels and stories by Agatha Christie, Ordeal by Innocence is set in the West Country of England. This production shifted the location to Scotland and it was filmed in and around Inverkip.

The family name in the book is Argyle, whereas it is spelt Argyll in the programme (although the pronounciation is the same). The main suspect character, Jack, is called Jacko in the book  and he dies in prison from pneumonia, not by being beaten to death by another prisoner.

With regard to characters, Kirsten Lindstrom, the family's housekeeper, is a middle-aged Nordic woman in the novel—a detail that plays a key role in the mystery's solution; in the miniseries, she is turned into a Scottish woman in her thirties, who is one of Rachel's foundlings. Dr Calgary is played with hints of mental instability, whereas in the book his testimony is seen as reliable from the very beginning. Other characters, such as Gwenda Vaughan, Mary Durrant, and Hester Argyll, are portrayed much more negatively than they were in the novel: Gwenda is bossy and smug, Mary is deeply embittered, and Hester is a secret alcoholic. 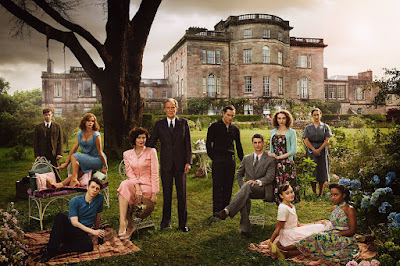 A decanter to the skull. A gently spreading pool of blood beneath the body on the rug. The scream of a servant. A houseful of suspects assembles. We can only be watching an Agatha Christie.
WELCOME.
If Holy Week and the advent of spring seems like an odd time to give viewers the secular, murdery treat that is a Christie adaptation – this time of her 1958 story Ordeal By Innocence – well, that’s because it is.

The three-part mystery was supposed to follow in the footsteps of writer Sarah Phelps’ last two immaculate reworkings, And Then There Were None in 2015 and Witness for the Prosecution in 2016, and be the centrepiece of the 2017 Christmas schedule.

When one of the actors involved, Ed Westwick, became the subject of multiple historical sexual assault allegations, the decision was taken not to broadcast Ordeal By Innocence and to reshoot with a new actor, Christian Cooke.

The whole phalanx of actors – including Anna Chancellor as wealthy philanthropist and collector of waifs and strays Rachel Argyll (soon to have her skull decanted by the decanter); Bill Nighy as her widower Leo (soon to remarry with his frightful secretary Gwenda – played by Alice Eve, who at the last moment was unable to join them from the US and was split-screened in later); Morven Christie as the screaming servant; and Anthony Boyle as the apparent wielder of the fatal crystalware – reassembled in January and redid 35 scenes, with Cooke playing the volatile Mickey Argyll, one of Rachel’s multitudinous now-adult orphan charges, in 12 days.

If you didn’t know, you wouldn’t – a few stray icy breaths showing as they attempt to recreate a July setting in a Scottish location midwinter notwithstanding – be able to tell. The whole thing knits together seamlessly. It grabs you from the opening scenes, as Rachel is dispatched and Jack, always the most delinquent of her adopted children, is convicted – thanks to his fingerprints in her blood – of her murder despite his protestations of innocence. He is killed in prison.

So far so good. But half an arch won’t stand. Where is the rest of the premise?

A year later, as the family gathers at the ancestral home for Leo and Gwenda’s wedding and some illuminating flashbacks, it arrives. A nervous young stranger called Dr Arthur Calgary (a fine and unexpectedly moving, in Agatha’s customarily affectless world, performance by Luke Treadaway) turns up with a suitcase and a claim that he can alibi Jack.

The game, to quote Arthur Conan Doyle – the other master of detective fiction without whom neither the libraries nor TV schedules of England would long survive – is afoot. 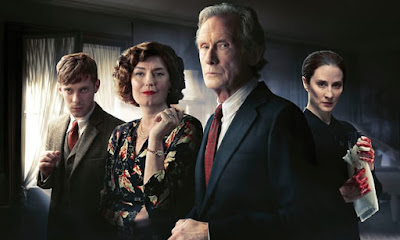 Like Christie on one of her husband’s archeological digs, the next hour is spent sifting the mingled sands of truth and lies. Discrepancies in Arthur’s story are discovered to arise from self-protection, not fraudulence. Bitter divisions in the family (and eyebrow-raisingly strong bonds – yes, Mickey and adopted sister Tina, I’m looking at you) are gradually revealed – none deeper and more bitter than that between monstrous mother and children.

Rachel, it turns out via a combination of flashing glances, elliptical threats and above all, the simple sense of barely repressed fury rippling through every atom of Chancellor’s being, is A Piece of Work. We know not why – yet? – but she is the devil in disguise and has given just about everyone in Denouement Hall a reason to bump her off.

From now on, it’s just a matter of letting the danse macabre unfold. Phelps doesn’t get in the way of Christie’s careful choreography. However, she – and a uniformly brilliant cast that also boasts Matthew Goode as the supercilious Philip, who’s clearly an absolute shit (especially to his wife, cowed Argullian daughter Mary, played with brilliant brittleness by Eleanor Tomlinson), even before he was embittered by being paralysed in a drunken car accident – flesh out and strengthen Christie’s characters, whom she was frequently happy to leave as ciphers in the puzzle she was laying out to solve.

The latest adaptations, rich, dark, adult and drawing on a backdrop of postwar grief and instability, are a far cry from the sunny – still murderous, but sunny – uplands scattered with millet seed for Joan Hickson to peck at as Miss Marple or the light-filled art deco apartments in which the leetle grey cells of David Suchet’s Poirot could do their work.

The audience’s innocence has been too battered by the ordeals of the past few years, perhaps, for them to pass muster now. We get the Agatha Christie adaptations, we need, it seems – and, in the last three outings at least, better than we deserve. 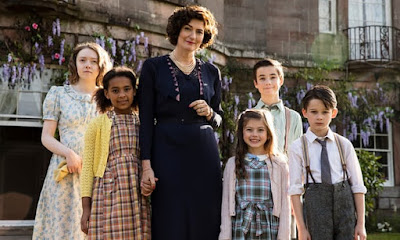 As the second episode of Ordeal by Innocence (BBC One) began, two of the characters had ceased to be. Monstrous philanthropist Rachel Argyll (Anna Chancellor) had been fast-tracked upstairs. In prison, having been fitted up for the deed, her monstrous son Jack (Anthony Boyle) followed suit soon after.

It was a good start, but frankly, they deserved to die. When the mysterious Dr Arthur Calgary (Luke Treadaway) turned up at Argyll Towers claiming to have an alibi for Jack, we realised that each of the dramatis personae had a good reason to bump off the old girl. So far, so traditional.

Less expected was that each of the others, unwittingly, presented a good case as to why they deserved to be murdered, too. Everyone was so unlikeable.

There was Bill Nighy’s widower Leo, smirking round the mansion. Gwenda Vaughan (Alice Eve), the former secretary with an eye on the inheritance. We must not forget skulking housekeeper Kristen (Morven Christie). Christian Cooke as Rachel’s pointlessly angry son Mickey Argyll. Matthew Goode, having a ball as disabled war hero Philip Durrant, was relentlessly cruel to his wife, Rachel’s daughter Mary (Eleanor Tomlinson, Demelza from Poldark). It takes a fine ensemble cast to make so many different characters so fabulously horrible. In fact, only Calgary and the deceased’s other daughter Tina Argyll (Crystal Clarke) deserved to be spared. Everyone else was free to shuffle off.

In Sarah Phelps’s post-war retelling, the threat of nuclear war looms in the background. A swift intercontinental ballistic missile would certainly have improved the civility of the breakfast table.

Three episodes might be one too many, but Ordeal by Innocence is a remarkably taut piece of writing. In murder mysteries the balance must always be struck between revealing enough so that the viewer feels that they could have worked out who did it, but not so much that they do. This is why almost all such programmes hinge on a detective: a Barnaby or a Poirot or a Lund. It’s not we, the intelligent audience, who are being deceived: it’s the blundering dick.

Without that device, here it must be achieved through hints and glances, quick cuts, and dialogue. By the end of the episode, there was a third death: another step that rightly threw us. For all our Scandi noir and sophisticated modern crime drama, Ordeal by Innocence proves that a masterful plot will endure beyond fashion. Christie’s reputation is safe in Phelps’s hands.