THE ROYAL TABLE / At the King's Table: Royal Dining Through the Ages by Susanne Groom / For the Royal Table: Dining at the Palace by Kathryn Jones. 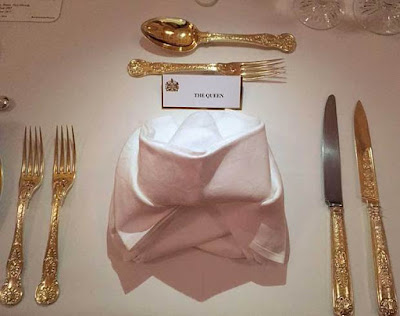 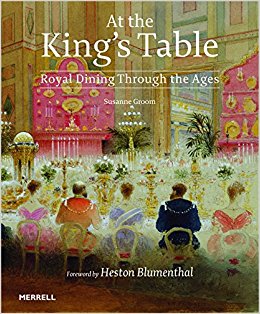 At the King's Table: Royal Dining Through the Ages – October 15, 2013
by Susanne Groom
“Here are the feasts that really are fit for a king – or queen. This delightful book explores the history of royal dining from the bustling kitchens of the Middle Ages to the informal dinner parties of today. Susanne Groom, a curator at Historic Royal Palaces, considers the diets of monarchs from Richard II to Elizabeth II, revealing the exotic beasts served at medieval courts, the 48-day picnic prepared for Henry VIII and François I of France at the Field of Cloth of Gold, the romantic suppers made for Charles II and his mistresses, Queen Victoria’s love of nursery food, and the gluttonous appetite of Edward VII. We also learn about royal table manners, the earliest cookbooks, the hiring of flamboyant chefs and the intrigues of unscrupulous kitchen staff, the ever-changing health advice given to the sovereign, and the influence of royal diet on the average family fare. Full of lively anecdotes, colourful characters, rarely seen illustrations, and menus from state banquets, weddings, coronations and jubilees, Kings, Queens, Cooks and Kitchens is a treat for all culinary fans.” 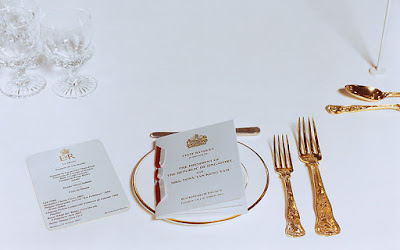 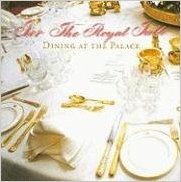 This lavishly illustrated book gives a unique insight into nearly 500 years of royal dining, from Henry VIII’s tournament feast at Greenwich in 1517 to the magnificent State Banquets hosted by Her Majesty The Queen today.  Previously unpublished material from the Royal Archives, including historic menus and recipes, show how the royal tradition of hospitality has marked coronations,  cemented  diplomatic  relations  and  celebrated  family  weddings  and  christenings. For The Royal Table provides a glimpse behind the scenes at the preparations for a State Banquet and is published to accompany the special State Banquet display at the Summer Opening of Buckingham Palace (29 July – 29 September 2008).

Contemporary photographs show how Royal Household staff, including chefs, footmen, pages, florists and housemaids, guarantee the highest standards of presentation at a State Banquet.   The laying of the table begins two days before the dinner, and each place-setting measures exactly 45cm (18in) across.  During the meal, a system of ‘traffic lights’ keeps the team of footmen and pages synchronised; a blue light communicates ‘stand by’ and an amber light signals ‘serve the food’.  Each guest has six glasses (one each for red wine, white wine, water and port, and two for champagne – one for the toast and one for the pudding course).  A diagram of the arrangement of the glasses guides those who are unfamiliar with the sequence of service.

From the Royal Photograph Collection is a charming series of portraits of Queen Victoria’s footmen and pages, many of whom had started in royal service under her uncle, William IV.  Serving food in a royal palace presented particular challenges. Staff were instructed that ‘trays must be kept level so that there is no spilling of gravy or sauces’.  At Windsor Castle every dish had  to  be  carried  up  narrow  stairs from  the Great Kitchen to  the State Apartments.  The chefs always made twenty extra dishes for each course in case of a disaster.  Following the devastating fire of 1992, the restoration of the Castle included a complete refitting of the kitchen quarters, adding lifts to deliver the food.  Royal Household staff still prepare food in the Great Kitchen, the oldest working kitchen in England, where traditional copper pots from reign of George IV stand alongside high-tech catering equipment.

The style of dining has changed considerably over the centuries, as can been seen from the elaborate menus and recipes from past royal banquets.  At a lavish dinner given by Charles II for the Garter Knights at Windsor Castle in 1671, guests were served 145 dishes during the first course, and the catering included 16 barrels of oysters, 2,150 poultry, 1,500 crayfish, 6,000 asparagus stalks and 22 gallons of strawberries.

George IV employed the famous chef Antonin Carême, who had worked at the Napoleonic court and went on to serve Tsar Alexander I of Russia.  The book reproduces his recipe for Pike à la Régence – pike stuffed with quenelles of smelt, garnished with truffles, crayfish tails, sole fillets, bacon, eel, mushrooms, oysters, carp roes and tongues. Carême invented what was to become the king’s favourite dish, Potage de Tortue à l’Anglise (turtle soup), 80 tureens of which were served at George IV’s coronation banquet in 1821. He had a profound influence on the style and service of food, and was known for his extraordinary table decorations. The accounts for the coronation banquet include a carpenter’s bill for an ornamental temple, which would have been decorated with sugar, marzipan and sweet meats.  After the king left the table, the guests destroyed all the edible parts of the temple in their desire to secure a souvenir of the event.

Gabriel Tschumi was Master Chef to three monarchs – Queen Victoria, King Edward VII and King George V.  In his autobiography, Tschumi recalled that for Queen Victoria’s Diamond Jubilee banquet 24 chefs were brought over from Paris to help with the cooking and that the younger apprentices in the royal kitchens attempted to grow their moustaches to resemble those of their French superiors. The book reproduces the recipe for Côtelettes de bécassines à la Souvaroff, served by Tschumi at King Edward VII’s coronation banquet in 1902.  This consisted of snipe cutlets covered in brandy, pâté and breadcrumbs, placed in a pig’s caul, and served with beans, truffles, mushrooms, and a Madeira and truffle sauce.

A job in the royal kitchens was usually for life.  Mildred Nicholls was first employed as the seventh kitchen maid at Buckingham Palace in 1907 and by 1919, when she left service, she had risen to number three in the hierarchy.  In the Royal Archives are her charming handwritten notes on the recipes used by the pastry chefs, such as Royal Plum Pudding, crème a la Carème, Pouding Soufflé à la Royale and a Danish dish known as Rodgröd.  The latter was a favourite of Queen Alexandra, the Danish consort of King Edward VII, and was often served at post-theatre supper parties at Buckingham Palace. 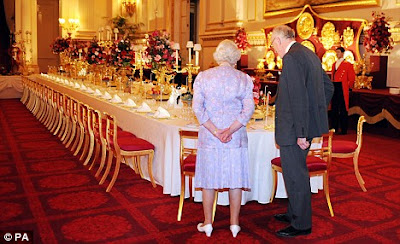 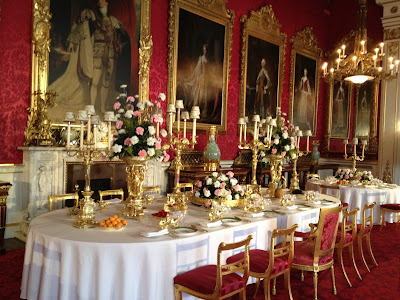 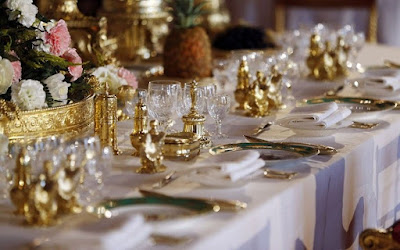 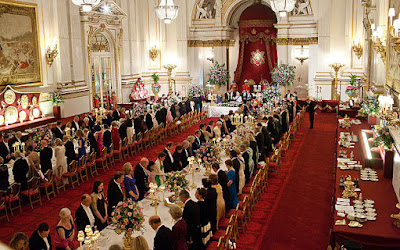 Review : Lynne
5.0 out of 5 stars How to Dine Like a Royal
January 14, 2013
A lovely book which details the many extensive preparations required for State banquets given at Windsor Castle and Buckingham Palace by Queen Elizabeth II. Vivid color photos, both current and historical, show the exquisite table settings, lovely fruit and flower arragements, magnificent gold and silver-gilt serving pieces, exquisite Sevres service plates, glassware, linens and even how to fold a Dutch bonnet napkin. Perhaps the most spectacular is the Grand Service, which includes 14 tureens and 107 candelabra and 2,000 pieces of cutlery. The lavish display of gold plate at banquets was meant to show the monarch's wealth, power and glory and surely, it has to be a wonderous experience to sit at table with such magnificent table settings even today. I also liked seeing the historic copper moulds & color illustrations of lavish Victorian confections and ices, which would be presented at table on fantasy stands during Queen Victoria's era. Found out a secret about those whole pineapples used as table decorations -- they are actually sliced in the kitchen, reassembled and the slices are offered at desert time. There are a few recipes from the olden days, like Turtle soup, which few of us will likely experience today, since it requires a 200 lb. turtle, 2 legs of veal, ham slices, 8 fowls, various vegetables & 8 bottles of Madeira wine, which have to cook all day long. It was George IV's favorite dish. Diagrams of table placements, both old and new, show the complicated art of seating and you will read about how service personnel are trained to serve these elaborate banquets, even as to how & in what order wine glasses are removed. Hand painted menu cards in French complete the table setting. There is also a list of Heads of State entertained by Queen Elizabeth II since 1952 up through 2008, the first being King Gustaf and Queen Louise of Sweden. A fine historical record for anyone interested in royal dining. Dinner any
Publicada por Jeeves em 01:22