THE RETURN TO CAMELOT: CHIVALRY AND THE ENGLISH GENTLEMAN by Mark Girouard. 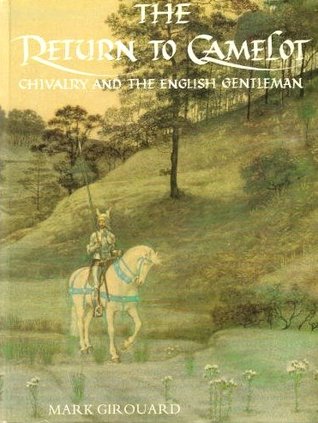 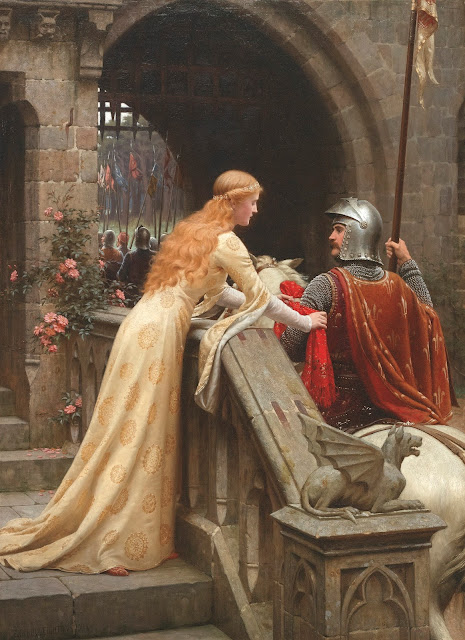 Richard Altick
The Return to Camelot: Chivalry and the English Gentleman by Mark Girouard
https://www.lrb.co.uk/v03/n22/richard-altick/magnanimity

Yale, 312 pp, £12.50, September 1981, ISBN 0 300 02739 7
It was the muddiest fiasco since the flooding Avon put paid, just seventy years earlier, to Garrick’s Shakespeare Jubilee extravaganza at Stratford. In 1839 the 26-year-old Earl of Eglinton held at his Scottish estate a magnificent chivalric entertainment, complete with chain-mailed jousters on caparisoned horses, a court of noble women attending the Queen of Beauty, and all the pageantry and bloodless combat proper to Medieval entertainment. The cream of society was invited and spent a huge sum outfitting itself. On the opening day the road to Eglinton was clogged for thirty miles as 100,000 commoners (it was said) gathered to watch Scott’s romances brought to life. But within a few hours a raging storm sent them slogging homeward through morasses of mud, and the blue-blooded cast and audience, their Medieval hair-dos now sodden and lank, retreated into marquees that leaked water at every crevice. The next day, the torrent continuing, the knights tilted with mops and broomsticks in the waterlogged ballroom. The press had a field day of its own. In that year of severe depression, with the clouds of Chartism steadily darkening, the nation could do with a spot of comic relief, especially in the form of the aristocracy making expensive fools of themselves.

This was not the first event in the history of revived medievalism to symbolise, however inadvertently, the vulnerability of the chivalric ideal in modern society, nor was it to be the last. Already, in 1825, the tall tower of William Beckford’s new baronial hall. Font-hill Abbey, had collapsed without warning. A few years after the Eglinton debacle, one of the day’s leading artists, William Dyce, was commissioned to paint allegorical frescoes on Arthurian themes in the Queen’s Robing Room in the new Houses of Parliament. A decade later, a coterie of young, untried artists including Rossetti, Burne-Jones and Morris set out to adorn the walls of the Oxford Union with similar subjects. But neither Dyce nor the high-spirited youths were qualified to paint in fresco, and the Oxford pictures decayed and disappeared even more rapidly than the ones at Westminster, which required extensive repairs as early as 1868.

Despite these calamities, the Victorians were bent on adopting the Arthurian ideal as the supreme guide to conduct. Courtesy, gentleness, honour, physical valour, mercifulness, generosity, sexual purity, devoted service to women, consideration for the oppressed – mortal man could scarcely accommodate more virtues than these. Although Burke, in his famous lament over Marie Antoinette, had declared, ‘The age of chivalry is gone. That of sophisters, economists, and calculators, has succeeded; and the glory of England is extinguished forever,’ at the beginning of the 19th century the Romantic delight in things Medieval had nurtured a regenerated admiration of chivalry. Outside literature (Scott’s romances set in the Middle Ages, such as Ivanhoe and Quentin Durward, were to kindle the imaginations of countless boys and men throughout the century), the chivalric vogue manifested itself first in such fancy-dress forms as the Eglinton tournament and Queen Victoria’s ‘bal costumé’ of 1842, but by mid-century it was the spirit of chivalry, not its mere trappings, that predominated. Against a background of lavishly renovated castles, such as William Burges produced at Cardiff for Lord Bute, and country-house halls stuffed with arms and armour, the fashionable ‘collectibles’ of the day, the ethic of the mounted knight with sword and shield turned up in innumerable social contexts. From Disraeli’s Young Englanders it passed to Kingsley’s Muscular Christians, bringing workingmen’s colleges and settlement houses to the underprivileged, and thence to the self-consciously virtuous, studiously unintellectual, pattern-cut products of the public schools. Alfred Tennyson’s Uncle Charles, convinced that his family was descended from the Medieval d’Eyncourts, devoted his patrimony to converting a modest Lincolnshire house into the imposing Bayons Manor, ‘the most convincing re-creation yet put up in England of the manor house of a late-medieval gentleman’, and Bayons Manor, in turn, into a castle equipped with fortifications, drawbridge and artificially-ruined keep – an enterprise vividly described not long ago in Robert Martin’s biography of the poet. Decades later, Charles’s nephew, the Poet Laureate, could pay no higher tribute to the late Prince Consort than by dedicating the first several Idylls of the King to his memory as ‘Scarce other than my king’s ideal knight’. Between them, the two Tennysons illustrated two major aspects of the chivalric obsession. Fancy expanded into pretentiousness which then lapsed into absurdity, and noble sentiments carried within them the seeds of cant.

The full text of this book review is only available to subscribers of the London Review of Books. 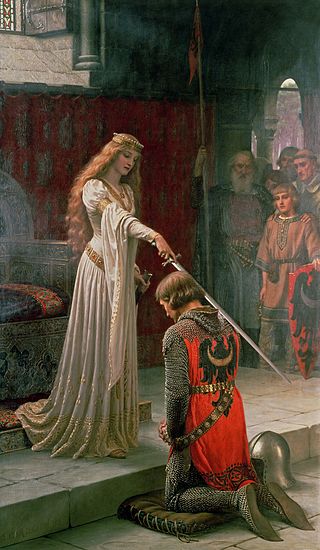 THE RETURN TO CAMELOT: CHIVALRY AND THE ENGLISH GENTLEMAN
By
KIRKUS REVIEW
https://www.kirkusreviews.com/book-reviews/mark-girouard-3/the-return-to-camelot-chivalry-and-the-english-/

A sweeping, reverberating exploration of the critical part played by the concept of chivalry in forming the English gentleman's character from the period of the French Revolution through the heyday of imperial expansion and the rude awakening of World War I. Though Girouard (Life in the English Country House) tends to see history as the sum of particles of experience (visible particles largely), his wide-angle vision leads him to marshal an extraordinary diversity of evidence, including: the highly stylized sex lives of the Pre-Raphaelite painters, the curious revival of Gothic castle architecture, the commercial success of inspirational novels (Tom Brown's Schooldays, et al.), and the radical conservatism of Thomas Carlyle and the Christian Socialists. But only toward the close--after keeping the reader suspended, if absorbed--does Girouard produce his central thesis: the complimentary relationship between the image of the gentleman and the exigencies of 19th-century ruling-class life. ""The changing image of the gentleman had obvious attractions to those born into the ruling class,"" he writes. ""It meant that, at a time when inherited privilege was increasingly under attack, they were presented with a powerful weapon with which to overcome criticism and keep their position."" That ""changing image"" served--we recognize throughout--to disguise a multitude of often questionable social and political attitudes: rabid anti-intellectualism, hostility toward the middle class, fanatic devotion to physical fitness, and a political vision dominated by both nostalgia for the feudal past and unquestioned faith in the imperial future. Girouard's inquiry also accommodates many a fanciful diversion--as when he suggests that the high-chivalric Englinton Tournament, a jousting event which drew upwards of 100,000 spectators and participants, may have originated in seven-year-old Charles Lamb's fascination with pet guinea pigs. . . which he transformed by the hundreds ""into knights, counts and dukes"" (garbed and housed to suit). The book really hits its stride, however, in the final chapters, particularly the three devoted to public school athletics, the Boy Scouts, and the development of British imperial policy. Telling points are made here too by the panoply of illustrations, a Girouard trademark. (See the early Rugby footballers in velvet caps and patterned jerseys--forerunner of the modern football jersey?--or the book cover featuring St. George with the Boy Scout fleur-de-lis on his shield.) With apposite literary excerpts as well, a contribution to the history of ideas that will especially appeal to those who fancy the tangible.

Around about the time of its wars against the French Revolution and then Napoleon, England witnessed an odd and interesting phenomenon that lasted through the entire 19th century and right up to the end of the Great War: The revival of the medieval code of chivalry, with King Arthur, knights in armor, the notion of courtly love, and all. The ideals of personal bravery and honour, service to the nation, and self-sacrifice reappeared in modified form and helped shape British culture for several generations, not only in art and literature but even in politics.

Sir Walter Scott's novels had a lot to do with reviving the myth of chivalry (and it was indeed mostly a myth), and so, too, did the paintings of Benjamin West, featuring the Black Prince and other knightly heroes. And Tennyson helped further the new myth in the next generation. There was a new rise of interest in the Middle Ages, but George IV and then the Victorians interpreted that period to suit themselves. Those with the money to build new country homes often opted for what they fancied were medieval-style castles. Prince Albert's tomb features a reclining sculpture on top depicting the Prince in full armor with his favorite dog at his feet, also in medieval funerary style. Even Baden-Powell promoted his new Boy Scouts in Arthurian chivalric terms.

The whole thing reached its climax with the deaths of Capt. Robert Scott and his companions in Antarctica early in 1912 (especially Capt. Oates, who "walked out to his death an English gentleman") and with the sinking of the TITANIC later that same year. Many of the English males aboard politely helped their wives and other women into the lifeboats and then stepped back, content to go down with the ship. At least, that was the myth. (Though it's true that Bruce Ismay, managing director of the White Star Line, slipped into a boat at the last moment, and so survived -- and was never able to hold up his head again.) And just to round out 1912, there was also a jousting tournament at Earl's Court, in which a dozen aristocrats donned armor and went at each other with lances. (Lord Ashby St. Legers beat out the Duke of Marlborough for the gold cup.)

As always, Girouard brings his narrative to life with color and wit, all based on careful research. If you have an interest in social history, or in 19th-century literature, this heavily illustrated volume will teach you a great deal you probably didn't know.