Prince Andrew has been served with an affidavit for a lawsuit from Jeffrey Epstein accuser Virginia Giuffre.

Prince Andrew has been served with an affidavit for a lawsuit from Virginia Roberts Giuffre, who alleges she was forced to have sex with the royal when she was 17 years old.

A document filed in a US court on Friday showed that paperwork for Giuffre’s lawsuit was filed at Andrew’s home, Royal Lodge, in Windsor on 27 August. The affidavit was accepted by a Metropolitan police officer at the gates of the property at 9.30am, after the agent filing the document had been turned away the previous day, according to the documents.

Court documents show that a response is now due from Andrew by 17 September.

Buckingham Palace referred the Guardian on to an external PR agency who represent the Duke of York who were contacted for comment.

Giuffre filed a lawsuit against Andrew in August. She accused Andrew of sexually abusing her at the home of Ghislaine Maxwell in London and on three occasions in the US in 2001.

Andrew has “absolutely and categorically” denied having sex with Roberts and Buckingham Palace has called the claims “false and without foundation”.

The lawsuit further claims that Andrew knew she was a sex-trafficking victim, and that she has suffered – and continues to suffer – “significant emotional and psychological distress and harm”.

Maxwell, who is facing trial in New York in November, has pleaded not guilty to sex trafficking charges regarding her alleged involvement with Epstein.

In August it was reported that Andrew is considered a “person of interest” in the investigation into Epstein, who died in jail in 2019, and Maxwell.

Prince Andrew has repeatedly denied the allegations in the lawsuit brought by Virginia Roberts Giuffre.

A US court will hold a pretrial conference on Monday in the civil suit filed by a woman who claims Prince Andrew sexually assaulted her, as the two sides argue over whether the prince was properly served with documents in the case.

Lawyers for Virginia Roberts Giuffre say the documents were handed over to a Metropolitan police officer on duty at the main gates of Andrew’s home in Windsor Great Park on 27 August.

But Blackfords, a law firm that claims to represent Andrew “in certain UK matters”, has questioned whether the papers were properly served and raised the possibility of challenging the court’s jurisdiction in the case, according to a 6 September letter referenced in court documents filed by Giuffre’s attorneys.

“We reiterate that our client reserves all his rights, including to contest the jurisdiction of the US courts (including on the basis of potentially defective service),” they wrote.

A US judge will ultimately determine whether the papers were properly delivered. Judge Lewis Kaplan of the US District Court for the Southern District of New York will hold the first pretrial conference in the case via teleconference on Monday.

The prince has repeatedly denied the allegations in the lawsuit brought by Giuffre, 38, a longtime accuser of the late convicted sex offender Jeffrey Epstein.

When the suit was filed last month, legal experts suggested it left Andrew with no good options as he seeks to repair his image and return to public life.

If the prince tries to ignore the lawsuit, he runs the risk that the court could find him in default and order him to pay damages. If he decides to fight, Andrew faces years of sordid headlines as the case winds its way through court.

Guiffre’s lawyer, David Boies, said in court documents that it was implausible that Andrew was unaware of the suit.

“Attorneys at Blackfords, who he has apparently instructed to evade and contest service, have confirmed that Prince Andrew himself already has notice of this lawsuit and is evaluating his chances of success,” Boies wrote.

“And even if Blackfords had not confirmed as much, any other conclusion would be implausible – reputable media outlets around the world reported on the filing of plaintiff’s complaint, and hundreds, if not thousands, of articles about this lawsuit have been published.”

The lawsuit is another unwanted story for the royals, reminding the public of Andrew’s links to Epstein two years after his death. 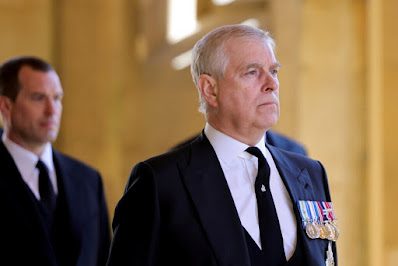 In the first hearing in the closely watched case, lawyers for the Duke of York argued that the lawsuit was baseless and legally dubious.

Britain’s Prince Andrew, the Duke of York, faces a lawsuit from Virginia Giuffre, who has accused him of sexual abuse.

A lawyer for Prince Andrew, who was sued last month by a woman accusing him of sexually abusing her when she was a minor, said in a Manhattan court on Monday that the lawsuit was likely to be invalid under the terms of an earlier confidential settlement — one that the prince’s lawyers have said the woman reached with Jeffrey Epstein.

The hearing, coming in the closely watched lawsuit brought by Virginia Giuffre, one of Mr. Epstein’s most prominent accusers, was the first public response from Prince Andrew, the Duke of York, and suggests that his legal team will seek to beat back any attempt to allow the suit to proceed. Prince Andrew’s lawyer also argued on Monday that his client had not been properly served with legal papers in Britain.

“We have significant concerns about the propriety of this lawsuit,” Mr. Brettler said at a hearing in Federal District Court in Manhattan.

Ms. Giuffre, 38, claimed in her lawsuit that Prince Andrew, 61, the second son of Queen Elizabeth, sexually abused her when she was under 18 at Mr. Epstein’s mansion in New York and on Mr. Epstein’s private island, Little St. James, in the U.S. Virgin Islands.

She also said in the suit that Prince Andrew, along with Mr. Epstein and Ghislaine Maxwell, forced her to have sexual intercourse with Prince Andrew at Ms. Maxwell’s home in London.

Prince Andrew, who has denied Ms. Giuffre’s allegations, has not been charged with any crimes, but he has long loomed over the investigation by federal prosecutors in Manhattan of Mr. Epstein and Ms. Maxwell.

Mr. Epstein, 66, was arrested in July 2019 on sex-trafficking charges, and a month later, he was found dead by hanging in his cell in a Manhattan jail; the death was ruled a suicide. An indictment charged that Mr. Epstein had recruited dozens of underage girls to engage in sex acts with him at his Manhattan mansion and his estate in Palm Beach, after which he paid them hundreds of dollars in cash.

Ms. Maxwell, who was arrested in July 2020, faces trial in November on charges that she helped Mr. Epstein recruit, groom and ultimately sexually abuse underage girls. In one case, an indictment charged, she was involved in sex trafficking a 14-year-old girl, grooming her to engage in sexual acts with Mr. Epstein and later paying her. Ms. Maxwell has pleaded not guilty to the charges.

Ms. Giuffre has said in earlier court filings that Mr. Epstein had offered her several times to Prince Andrew for sex when she was a teenager.

Other lawyers for Prince Andrew indicated last week in a letter to Ms. Giuffre’s lawyers that the prince would challenge the lawsuit on the grounds that Ms. Giuffre’s lawyers had not properly served him with the complaint, a routine step giving a defendant formal notice that he has been sued.

The lawyers also wrote that Ms. Giuffre’s claim against Prince Andrew may be invalid under terms of a 2009 settlement reached in a lawsuit against Mr. Epstein in Florida.

Ms. Giuffre’s lawyer, David Boies, had attached a copy of the letter from the prince’s lawyers to a court filing on Friday. In it, Mr. Boies said the lawyers’ suggestion that the earlier settlement “somehow releases Prince Andrew from the claims” made by Ms. Giuffre was “erroneous,” noting that Prince Andrew had not been a party to the earlier case.

The judge, Lewis A. Kaplan, said in court on Monday that he would hear arguments on the issue of whether the suit had been properly served. But he seemed to question the utility of the effort.

“I can see a lot of legal fees being spent and time being expended and delay, which ultimately may not be terribly productive for anyone,” the judge said.

Benjamin Weiser is a reporter covering the Manhattan federal courts. He has long covered criminal justice, both as a beat and investigative reporter. Before joining The Times in 1997, he worked at The Washington Post. @BenWeiserNYT