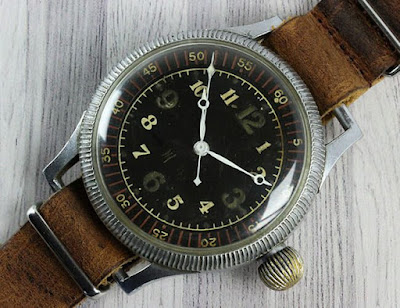 This Is the Seiko Watch Made for Japanese Pilots During WWII Known as the Seikosha Kamikaze, this obscure pilot’s watch has an incredible story to tell that is a little-known facet of Seiko history.

As Japan bitterly persevered toward the end of World War 2, young pilots were famously sent on suicide missions against Allied ships. It’s said that an early Seiko watch, properly known as the Seikosha Tensoku, was among their equipment. Often overlooked in the discussion of military watch history, these captivating but rare pilot’s instruments have some of the most interesting backstories in all the watch world.

While sometimes also referred to as Seikosha “Kamikaze” watches, the Tensoku was not specifically produced for Japan’s Special Attack Units that are now commonly known as kamikaze. The Tensoku watch is particularly associated with pilots of the Mitsubishi A6M Zero, which was the main Japanese combat aircraft in the Pacific War. These were the type of planes often used in the famous kamikaze attacks, but they were used in a wide range of other capacities as well.

Produced from around 1940, the Tensoku watches were provided to the Japanese navy by Seikosha, an early name for Seiko before the branding its known by today was established. Tensoku is an abbreviation of tentai kansoku, meaning astronomical observation — very similar in meaning to the names of their better-known German analogs from A. Lange & Söhne, Laco, Stowa, Wempe, and IWC. Those were known as Beobachtungsuhr (or “B-uhr“), which is translated literally as “observation watch.” These watches were important tools for aerial navigation and other applications.

Like their German counterparts, the Seikosha Tensoku is big even by modern standards, but massive compared to civilian wrist watches of their time. Not quite as giant as the 55mm-wide B-uhr, the Tensoku measures 48.5mm, which is quite large even for today’s wrists (except perhaps those accustomed to G-Shock and Breitling watches). Also like the B-uhr, they were supposedly often not worn on the wrist, but rather strapped to pilots’ thighs — or dangled from the neck.

As military-issued watches, these sizes were part of a range of specifications that dictated features typically including strict legibility, durability, accuracy, and other requirements. With minor differences between batches made over the years, most featured the same fluted bezel, Breguet-style hands, and large matte black dials with legible numerals and a sixty-minute scale at the periphery in red. Taken together, the Seikosha Tensoku watches have a unique and striking look among comparable military or aviation watches.

Examples of the Tensoku watch are known to have been powered by a few different hand-wound movements, mostly distinguished by the number of jewels they contained (15, and then later, simpler but more robust nine-jewel ones). The oversized “onion” shape of the crowns were big in order to remain usable while wearing the thick gloves necessary in the frighteningly unheated cockpits of the time.

Today, Seiko has risen extraordinarily to become Japan’s preeminent watchmaker and one of the most respected watch brands in the world, with an ardent following like that of few others. Many enthusiasts know that Seiko’s history can be traced to the late 1800s, but most attention and enthusiasm for vintage models today doesn’t look much further back than the 1960s and 1970s. Watches like the Tensoku reveal another aspect and deeper context to the modern brand that many people know so well.