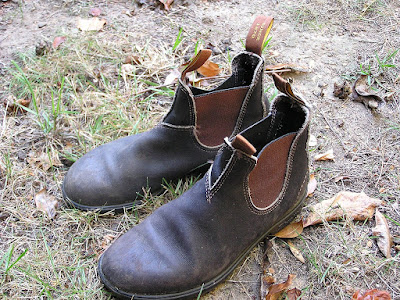 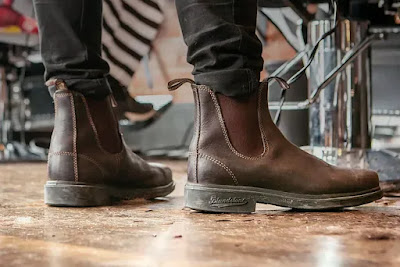 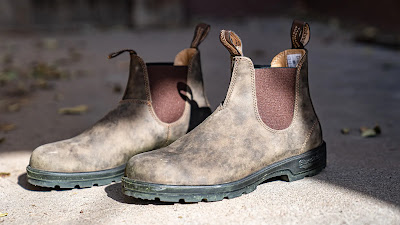 An Australian work boot (or generically elastic-sided boot) is a style of work shoe, typically constructed with a leather upper bound together with elastic sides and pull tabs on the front and back of the boot. The shoe lacks a tongue, and laces, and often contains a steel toe cap for occupational health and safety reasons. When the shoe contains a steel cap they are often known as "safety boots" or "steel toe boots". The boots generally lack an inner lining. The sole is generally polyurethane and the leather uppers are treated to be resistant to hot water, fats and mild alkaline and acid solutions.

The elasticated side design, originally invented in England by Joseph Sparkes Hall in 1837, allows the wearer to put on or remove their boots without the hassle of laces, while enjoying the firm fit of lace-up boots. In addition due to the boot not using laces the fit is less tight allowing more airflow, which makes a difference in hot weather. Also the lack of a shoe tongue makes it easier to waterproof the boot. The original English design, for urban use, became known as the Chelsea Boot in the 1960s. In 1932 R.M. Williams adapted this design for stockmen's boots. There are several Australian companies manufacturing boots in this classic style today. Some of the more popular brands are Blundstone (no longer made in Australia) (perhaps the original dating back to 1870), Rossi Boots (established in 1910 and still manufactured in Australia), R. M. Williams, Baxter Boots, Redback Boots, and Mongrel Boots (Victor Footwear, manufacturing in Australia since 1930). In Australian English, the manufacturer's brand name is often associated generically with this style of boot, leading to the names Blunnies, RMs or Rossis.

The shoes are typically worn as safety boots in occupationally hazardous environments, as ordinary work boots for people whose work is occasionally hazardous and who need to enter hazardous sites, as formal dress boots, as riding boots, or for particular aesthetic purposes. In the last category, the Novocastrian dance ensemble Tap Dogs uses modified work boots as tap shoes.

I know you were thinking of men wearing safety boots in hazardous jobs. But my husband, and his medical, legal and his accounting cohorts now wear them for leisurely gardening and going to golf. The elastic sides and no laces are great for Australian men over 60 - no need to bend over :)