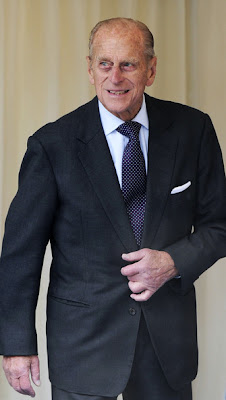 The Duke of Edinburgh, who celebrates his 90th birthday on June 10, is the longest-serving consort in the history of the British monarchy. The service he has given to maintaining standards in men’s dress is, however, almost as notable as the duties he’s performed over the 63 years of his marriage to the Queen.
For six decades in the public eye, the Duke’s appearance has consistently been beyond reproach. According to Catherine Hayward, Esquire magazine’s fashion director: “Prince Philip’s dress code is everything you expect from the Queen’s consort – sober, discreet, distinguished.” The Duke’s dress provides a model for the ideal business outfit, an ostensibly unremarkable combination of a single-breasted blue or grey suit with pale blue or white shirt, patterned silk tie and black shoes. The only decorative element is a crisply folded white pocket square.
It is a uniform so perfectly restrained that it defies criticism. For that reason it is much emulated by the current generation of male politicians: David Cameron, Barack Obama, Tony Blair and Nick Clegg all dress in a similar way. While politicians are, however, reluctant to appear interested in clothes, the Duke’s patronage of Savile Row is no secret. This, unsurprisingly, pleases Mark Henderson, chairman of the tailor’s association Savile Row Bespoke. “There is the most wonderful low-key smartness about the way he dresses,” he says.
The source of that smartness, at least for the past 45 years, is the tailor John Kent, of Kent, Haste & Lachter. This relationship began in the early 1960s when Kent joined Hawes & Curtis and, as “undercutter”, made the Duke’s trousers. After Kent was fully trained he became the Duke’s tailor, and retained him as a client when he set up on his own in 1986. Kent’s current firm opened for business last year and quickly received the royal warrant. “He’s not a great lover of Christmas tree bits,” Kent says, meaning that the styling is austere. “Single-breasted jackets; two-button front; four-­button cuffs; no vents except on shooting stuff; no flaps on the pocket, just jetted; classic trousers – not baggy but with four full pleats.”
It is these unfussy details, as well as the team of staff dedicated to looking after the Duke’s wardrobe – Kent makes intriguing mention of a “brushing room”, where his clothes are stored and cared for – that make his appearance impeccable. But it is the constancy of the Duke’s clothes that make him so discreetly influential. In the time that he’s been at the Queen’s side, various waves of youth culture have crashed over men’s dress, from rock ’n’ roll to hip-hop, via the hippy period and the new romantics. Meanwhile men’s fashion has been deconstructed by Giorgio Armani, seen its proportions reinvented by Yohji Yamamoto, been pared back by Helmut Lang and then Hedi Slimane, before Tom Ford set out to inspire a renaissance of 1970s ostentation. Through this tumult, the Duke has slimmed down the cut of his trousers and lengthened the line of his lapels.
Depending on one’s view of men’s fashion, it is either inspiring or depressing to think that the Duke’s clothes are perennially relevant, despite being, in some cases, four decades old. Robert Johnston, GQ magazine’s associate style editor and a fan of fashion’s restlessness, is not paying the Duke a compliment when he notes that: “He hasn’t changed the way he’s dressed since he married the Queen.” To Johnston, the Duke’s “playing it safe” is a failing. Esquire’s Hayward disagrees: “Sticking with the classics means that his outfits have never really dated, so after 60 years in the public eye there have been no fashion faux pas.”
Given the Duke’s interest in clothes, it is instructive to compare his style to that of his eldest son. It is clear that the Prince of Wales has something of a dandyish streak, with his penchant for soft-shouldered, double-breasted suits and overcoats, colourful pocket squares worn puffed, and turn-ups. There are echoes of the way that the Duke of Windsor rejected the sartorial orthodoxies of his father, King George V.
Asked if the Duke ever wears casual clothes, his tailor pauses, before dryly replying: “We’ve made him lightweight cotton suits for when he goes to the tropics.” Mark Henderson of Savile Row Bespoke summarises the exemplary nature of the Duke’s clothes: “In many ways he is the archetypal British gentleman, reminding us that style is permanent.”
By Mansel Fletcher in Financial Times.
Publicada por Jeeves em 00:26