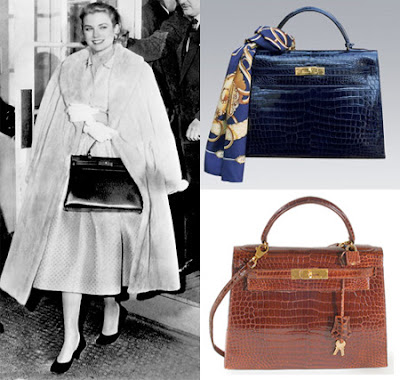 Jun 12, 2008 in suite 101.com
Gill Hart
Women the world over love the classic lines of a Hermès Kelly bag. Named after Grace Kelly, Princess Grace of Monaco, the Kelly is one of the greatest bags of our time. One of the most sought-after purses of recent decades has to be the Hermès Kelly bag, a timeless handbag design, right up there with it’s sister, the Hermès Birkin. The Kelly bag, however, has enjoyed a longer life than its sibling, when it was thrust into the limelight in 1956.

The origins of the Kelly first appeared, in its original form in the 1930’s but it wasn’t until 1956 that it truly became a star. With its smart tailored-shape it evolved into a ‘50s favorite during the Hollywood glamour years, and has enjoyed an iconic status ever since.

Why the Kelly Bag is So Named
The Kelly bag is so named after the actress Grace Kelly, when in 1956, the then Princess of Monaco used one of her two favorite Hermès bags to shield her pregnant stomach from the prying eyes of the paparazzi. Photographs of her covering her stomach bulge with her hallowed Hermès were splashed all over the world and made it onto the cover of Life magazine! 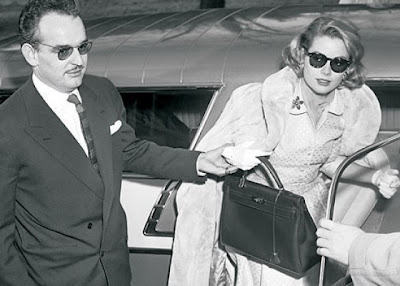 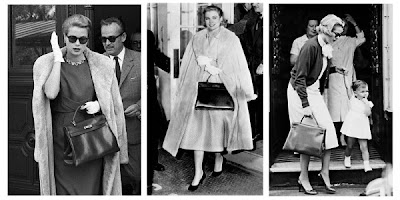 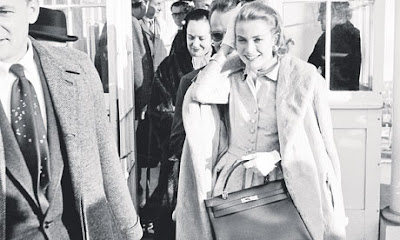 Zoe Wood guardian.co.uk, Friday 2 September 2011
The fashion pack has always known a Hermès handbag is a good investment but the clamour to invest in the exclusive French handbag-maker has given it a new wow factor: the super-luxury group is now valued far more highly than France's second biggest bank, Société Générale.

The firm behind the famous Kelly and Birkin bags, which can easily cost more than a car, and the Queen's favourite headscarves is now valued at more than €28bn (£24.5bn) on the Paris stock exchange, while SocGen is worth €18bn. The disparity means the nimble fingers of an Hermès artisan, who spends up to 24 hours painstakingly stitching a bag with one long waxed thread, are valued 30 times higher than the moneymaking brainpower of a SocGen investment banker.

"It is extremely demanding to turn 700-odd bits of leather into a useful bag," says Pierre-Yves Gauthier, head of research at AlphaValue, who says that with a fraction of SocGen's staff and turnover, Hermès's market capitalisation equates to €3.3m per employee.

Luxury goods sales have bounced back from the hiatus caused by financial crisis thanks to the growing ranks of the super-rich in emerging markets such as China who are shopping till they drop at home or abroad. This week Hermès said its sales jumped 22% to €1.3bn in the first six months of the year as consumers in important markets such as the US, which were battered by the recession, rediscovered their taste for the finer things in life.

Indeed such is the demand for the firm's coveted handbags that Patrick Thomas, chief executive, warned of a shortage that would stifle sales in the coming months. "We can only make so many bags," he said, adding that Hermès had hired 400 new staff to raise production of leather goods by nearly 10%.

With 174 years of experience under its buttery leather belt – and still 73% owned by about 60 members of the sprawling founding family – luxury experts put Hermès in a class of its own. Thomas told one interviewer recently: "We try to do poetry and we get excellent economic results." That poetry comes at a price: the Birkin bag, for example, which is named after singer Jane Birkin, starts at £5,400 but can cost as much as £100,000 in exotic skins such as saltwater crocodile.

In the company's main workshop in the Paris suburb of Pantin, time has stood still. There, 340 craftsmen and women spend 18-24 hours handsewing each bag. Only the zipper and inside pocket are finished by machine. Orders can be delayed for several years as the company scours the globe for the right colour of crocodile.

Harrods managing director, Michael Ward, says the waiting list is "the new VIP pass" and after what can be an 18-month wait for a Birkin the store performs an "opening ceremony" when the box arrives: "The last person to touch the bag was the artisan and when [the customer] opens the box she is the next one to touch it."

María Eugenia Girón, a professor at Madrid's IE business school and author of Inside Luxury, says customers will pay for expert craftsmanship that has been passed down through six generations of the business, founded in 1837 by Thierry Hermès, a French harness-maker who supplied the royal houses throughout Europe. "Hermès has the magic combination of tangible and intangible brand values," says Girón. The craft skills make its handbags unique but there is the stardust sprinkled on products such as the Kelly, named after Grace Kelly, which imbues them with the qualities of the princess famed for her style and beauty, she explains.

Girón says Hermès has never made sunglasses because it does not believe it has the rigorous level of manufacturing expertise that would enable it to make "unique, authentic products". You get the picture when you learn that the material for its famous coloured scarves is woven in Lyon from silk raised on its own farm in the mountains of Brazil and the fragrance Un Jardin sur le Toit, launched earlier this year, was concocted by Hermès's own perfumier in Grasse, the world's perfume capital in the south of France.

Pierre Mallevays, a former head of M&A at LVMH, who now runs boutique advisory firm Savigny Partners, says much of Hermès's current success is down to the "brand vision" of Jean-Louis Dumas who took the helm in the late 70s. Dumas relaunched the Kelly in bright colours and introduced the bigger Birkin after a chance meeting with the actress on a Paris-London flight. Birkin told him her Kelly bag was not big enough. "Hermès owns that unique "artisan" space where it can charge a fortune based on the perception that its products are the ultimate degree in craftsmanship and use of the best materials," says Mallevays.

Hermès shares are up 70% this year, closing the week at around €270, turbocharged by the unexpected – and unwanted – arrival of the predatory LVMH luxury group on its shareholder register. The Krug-to-Kenzo group, overseen by Bernard Arnault, France's richest man, has snapped up a 21% stake in Hermès, saying its intentions are friendly.

The Hermès family and Thomas are determined to retain the company's independence with the latter memorably telling a press conference this year that: "If you want to seduce a beautiful woman, you don't start by raping her from behind." Rather more politely, the company has said of LVMH: "[There is] an intruder in the garden but we don't want him in the house."

A merger, Thomas added recently, would "kill" Hermès: "You would keep the brand and keep the name, but Hermès would be dead."

The appeal of Hermès

The past decade has seen a huge rise in the number of women carrying designer handbags, despite their £1,000 price tags. Heavy leather bags with chunky buckles and proper names have become the property of the fashionable masses rather than the preserve of the wealthy. But Hermès bags have managed to retained an air of exclusivity. They cost at least four times as much as the average designer handbag, which makes them unattainable for anyone who is not extremely rich. This has added to their allure, combined with the fact that the brand's most famous style, the Birkin isn't available to buy instantly – instead you have to join a waiting list that can allegedly last years, depending on who you are.

Hermès bags have long had the reputation of being the ultimate "stealth wealth" fashion statement, signalling: "I'm richer and have more influence than you." The label has an equestrian heritage and focuses on the quality of its leather and harness-like fastenings. As a result, the bags are not ostentatious. Nor do they follow trends: many designs remain unchanged for years and they are meant to last a lifetime. This adds an extra dimension to the message: its classic bags also silently say: "My taste is refined and I don't need to show off a label." The Hermès approach has proved so successful that several several other luxury brands, including Céline, have attempted it recently. 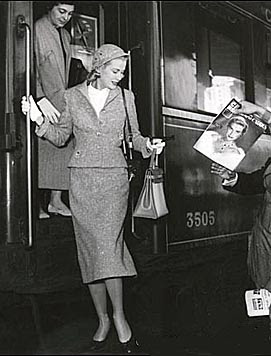 Hermes is a very well known fashion house and brand that is loved by women all over the world. The brand has come up with many unique creations when it comes to handbags, over the years; however, one bag which remains very famous till date is the Hermes Kelly bag which was named after the actress Grace Kelly.

The beautiful actress Grace Kelly also happened to be the Princess of Monaco, and upon her pregnancy after her marriage, she was not very comfortable showing her bulging belly to the media. As a result of that, on her public appearances, she was found to be hiding her pregnancy with her Hermes bag. When more and more people got to know about this little secret, pictures of the actress hiding her pregnancy with her handbag were spread all over the world. The bag then became so famous that it started to be known as the "Kelly Bag".

Even though Hermes has a "Birkin Bag", named after the actress Jane Birkin, the Kelly Bag seems to have surpassed that in terms of hype and popularity. It takes around two alligators' skin to make one Kelly Bag, and the hardware and the design is so classic and beautiful, that the bag is indeed a masterpiece. On more research about the handbag, it was found out that it takes around 18 hours to produce just one such bag.

The Hermes Kelly Bag history story remains interesting and captivating till date, and the designs of the bags from Hermes, Paris, happen to be an inspiration for many new and upcoming fashion designers, and also for those working specifically in the handbag industry.

There are many different colour options available, and over the years, the kind of materials chosen to design the Kelly bag have also changed, giving the classic design many new versions. You can find out about all these bags at the Hermes website, or at any of their outlets. So if you too are fascinated with the story and history behind the making of the Kelly Bag, then go and get yourself one of these bags today! 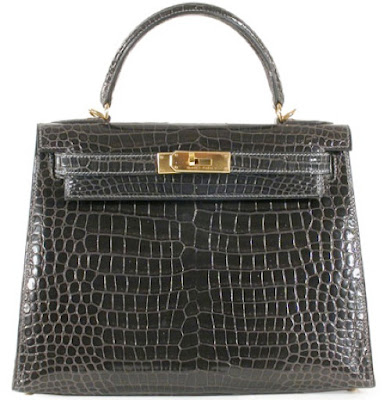 oh this bag is so amazing and timeless beautiful like grace kelly herself what a divine lady!

Hermes is a French high fashion house specializing in leather, ready-to-wear, lifestyle accessories, perfumery, and luxury goods. The company is renowned in the fashion world, and its products are considered to be prestigious by virtue of workmanship, reputation, and price. Hermes Kelly