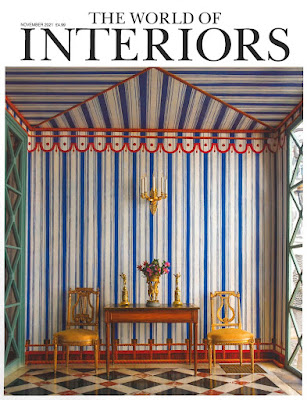 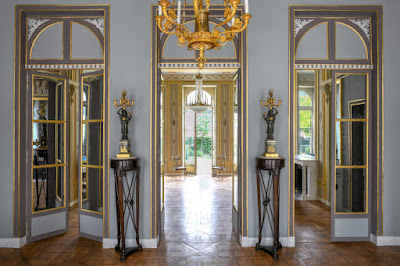 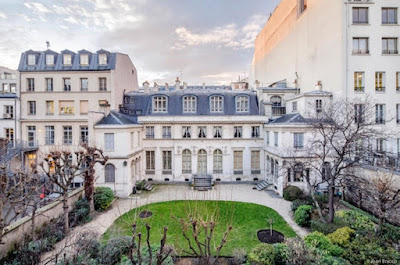 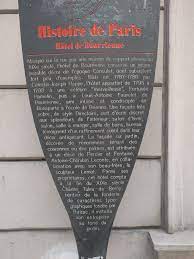 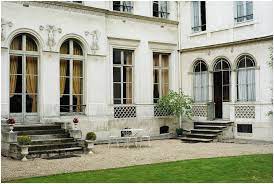 Bought and completed in 1790 by Mr. Lormier-Lagrave, this town mansion the Hôtel de Bourrienne was subsequently bequeathed to Lormier-Lagrave's daughter, Fortunée Hamelin, in 1792. Fortunée, a friend of Joséphine de Beauharnais, then commissioned Bélanger to decorate the house. However, heavily in debt, she was forced to sell it in 1801 to Louis Antoine Fauvelet de Bourrienne, a former companion of Napoleon's at the Military Academy of Brienne and his secretary since 1796. Dismissed in disgraced by Napoleon for his fraudulent business activities, he seldom occupied his home until his return after the Restoration. In 1824, Bourrienne moved to the country and sold the mansion.

Whilst the mansion owes its outside appearance to Bélanger, the Victories bearing with laurel wreaths decorating the façade overlooking the garden were designed by Leconte who had made the same for the Château de Villiers, bought by Murat in around 1800. The interior decoration, in the style of the Consulate period, has been preserved in many of rooms. The dining-room contains furniture by Jacob. The study, whose ceiling was once decorated with a painting by Prud'hon, has still the antique-style dadoes and cartouches, while the drawing room boasts a fine series of stucco panels and a painted ceiling representing a canopy. The bedroom is decorated in pure Pompeian style. The visit ends with the bathroom, painted in blue and gold, with its delicately chiseled mirrors and small columns. This charming town mansion is, in Paris, one of the few of the Empire period open to the general public.. 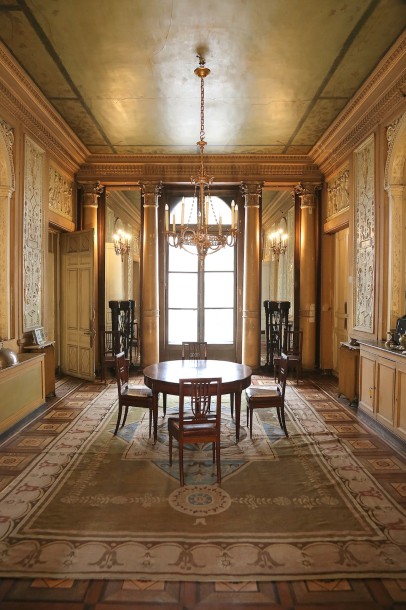 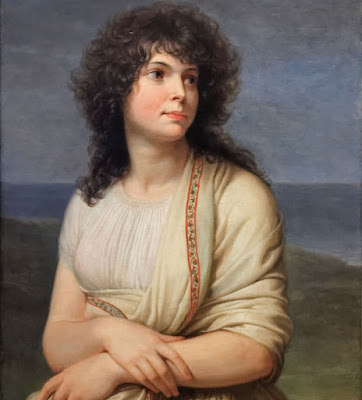 The art of living under the Directoire: between debauchery and refinement

Our brand, Bourrienne Paris X, takes its name from the place where it was born: the Hôtel de Bourrienne, one of the few Parisian buildings from the Directoire period still intact today. The splendour of its salons and the richness of its decoration give us a glimpse of the sumptuous parties that were held there, bringing together equally colourful characters. However, for many, the period of the Directory remains unclear and is the subject of many myths and fantasies. What was this period? How did people live during this period? What were the practices in vogue? What was the fashion? The general atmosphere? These are all questions we asked ourselves at the beginning of the brand, whose very essence is intimately linked to this four-year period, as rich as it was short.

The Directory, a liberal but unstable regime

Paris, 10 Thermidor of the year II (27 July 1794). The fall of Robespierre (or rather of his head) precipitated the end of the revolutionary government of the Terror (1793-1794) and ushered in the so-called "Thermidorian" era. A year later, the Constitution of the year III adopted in August 1795 by the Thermidorians marks the advent of a new regime: the Directory. Succeeding the Convention (1792-1794), the Directory was the second political regime of the First Republic. It was distinguished politically by a bourgeois liberalism and a stricter separation of powers, which were shared in a collegial manner. The legislative branch was made up of two assemblies, the Council of Five Hundred and the Council of Elders, which had 250 members. The former proposes laws that must then be approved by the latter. The executive power is entrusted to five Directors elected by the Council of Elders on the proposal of the Five Hundred for a period of five years. Each of these Directors is responsible for a region of France and a specific administrative area.

At the outset, the Directory was intended to be a more democratic regime than the previous one. A prominent figure in the regime, the Vicomte de Barras declared: "Our desire is to consolidate the Republic and to restore social order in place of the chaos that is inseparable from revolutions. This is the task of the Directory".. The regime remains nevertheless rather unequal because of the censal suffrage in place to elect members of the two legislative assemblies. This method of voting, based on the level of wealth, excludes a large proportion of citizens who are supposed to be equal in rights and duties. The electoral college has only thirty thousand voters for a population of about thirty million. Moreover, the regime is relatively unstable. Despite the precautions taken to avoid any form of despotism, governance under the Directory was disrupted by tensions between the Deputies and the Directors, who frequently resorted to coups de force to impose their authority. Another striking fact is the disastrous state of the economy. The country experienced unprecedented inflation, which encouraged the practice of agiotage, a form of dubious speculation on the price of money and goods, leading to the emergence of a class of nouveau riche who shaped the directorial society.

The return of lightness in the Directoire society

Despite this tense political and economic context, it is difficult to deny the contributions of the Directory in the cultural fields that forged the French art of living. The end of the Terror marked a break with the austerity of the previous Jacobin period. Perceived by some as a relaxation of morals and by others as the simple expression of individual freedoms, the renewed society of the Directory allowed itself to indulge in pleasure. It was a time of celebration: social salons reappeared, gastronomy developed with the appearance of the first restaurants, and a "dancing fury", danceomania, took hold. Hundreds of people flocked to the popular balls organized in the public space. More than 600 public balls were organized during this period. One of the most famous is the famous Victims' Ball where only those who claimed to have lost relatives on the scaffold were admitted. They danced in mourning clothes and saluted with a shake of the head, as if struck by the guillotine knife.

Frivolity, luxury and extravagance became commonplace among the newly rich and the aristocrats who had survived the Revolution and who flaunted themselves on the Champs Elysées and in the gardens of Tivoli, Idalie, Monceau or Bagatelle. Among the remarkable figures of the Directory, one finds the elite of style, this noisy minority of the Parisian golden youth that are the Incroyables and the Merveilleuses. They stood out for their allure and positioned themselves as the deciders of "supreme good taste" in matters of conduct, dress and language.

L'Incroyable wore a melancholic look, with braids falling over his shoulders in a "dog-eared" fashion, dressed in large, square, brightly coloured clothes and carrying a large stick that served as a cane or weapon against the Jacobins he encountered on his way. Beyond his appearance, the Incroyable is recognizable by the way he speaks. As a sign of protest against the Revolution and the fall of the King, the letter "r" was banished from his language, giving rise to conversations that were "inc'oyable" to say the least.

La Merveilleuse is the figurehead of this golden youth. According to the Goncourt brothers, "the Thermidor revolution was the victory of women". In their Histoire de la société française pendant le Directoire (1864), they recount: "Once the Terror was dethroned, women resorted to their eternal role; they pitied hearts in order to lead minds; they turned the political revolution into a sentimental revolution. Then, with tears badly dried, they threw France towards their patron: pleasure; and soon, they were the mistresses and queens in this country which had just fasted from luxury, diamonds, gallantry and parties. Never has woman occupied the public in such a way, never has she touched business in such an apparent manner."

The influence of these queens of the Directory is such that their fame sometimes exceeded that of their spouse. Recognizable by their beauty and their sharp wit, Mesdames Tallien, Bonaparte or Récamier stand out as the main leaders of the Directory. Alongside them, more discreet in history but just as radiant, Fortunée Hamelin is one of these queens of the Directory who is particularly dear to our universe. Before taking the name of Bourrienne, the mansion where Bourrienne currently resides Paris X was known as the small hotel of Bazin. It was the property of Mrs. Hamelin who brought the decorations that we can still find today. She is one of the main muses of our label.

These Merveilleuses were at the centre of Parisian social and political life and imposed their style throughout the regime. Borrowing from the ancient style of dress, they made popular the light outfits with their long silhouettes and transparent fabrics, reminiscent of the clothes of Greek and Roman deities. These light dresses were sometimes the cause of great disturbances in the public space. An anecdote about the Wonderful Fortune speaks volumes about this. While walking on the Champs-Elysées with one of her friends, Fortune, then lightly dressed in a diaphanous veil that did not hide much, was quickly pursued and called all sorts of names. Scandal!

Ancient influence in art and architecture.

This renewed interest in the ancient period followed the archaeological research of the second half of the 18th century which allowed the identification of the ruins of Pompeii and Herculaneum. Neoclassicism spread to many artistic fields such as painting but especially architecture and decorative arts. The development of a new class of rich people allowed the luxury trade to flourish. These new fortunes called on the best craftsmen to build and decorate their mansions, which sprang up in the northwest of Paris, around the Chaussée d'Antin district. Elegance, refinement of form and perfection of execution characterize the interior decoration. The space is structured with columns, pilasters and friezes. The materials and colours are mixed and matched. Mahogany and ebony rubbed shoulders with silks and muslins in shades of parma, pale green or intense blue, which were very much in fashion at the time. The walls were decorated with representations of mythological scenes, imitation marble and trimmings. The Etruscan style of the furniture completes this ensemble, giving the whole a decadent richness that would be taken up again under the Empire a few years later. The Egyptian campaign led by Bonaparte was also a great source of inspiration for enriching these decorations.