"Any hussar who is not dead by the age of thirty is a blackguard." 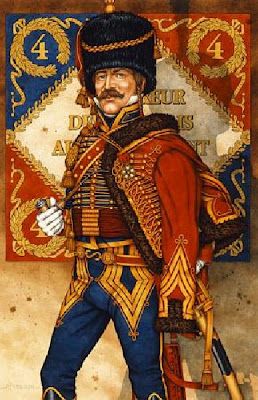 The colourful military uniforms of hussars from 1700 onwards were inspired by the prevailing Hungarian fashions of the day. Usually this uniform consisted of a short jacket known as a dolman, or later a medium-length "attila" jacket, both with heavy horizontal gold braid on the breast, and yellow braided or gold Austrian knots (sújtás) on the sleeves; a matching pelisse (a short-waisted overjacket often worn slung over one shoulder); coloured trousers, sometimes with yellow braided or gold Austrian knots at the front; a busby (kucsma) (a high fur hat with a cloth bag hanging from one side; although some regiments wore the shako (csákó) of various styles); and high riding boots (often Hessian boots). A sabretache, an ornate pouch hung from the belt, often completed the accoutrements.

European hussars traditionally wore long moustaches (but no beards) and long hair, with two plaits hanging in front of the ears as well as a larger queue at the back. They often retained the queue, which used to be common to all soldiers, after other regiments had dispensed with it and adopted short hair.

Hussars had a reputation for being the dashing, if unruly, adventurers of the army. The traditional image of the hussar is of a reckless, hard-drinking, hard-swearing, womanising, moustachioed, swashbuckler. General Lasalle, an archetypal showoff hussar officer, epitomized this attitude by his remarks, among which the most famous is: "Any hussar who is not dead by the age of thirty is a blackguard." He died at the Battle of Wagram at the age of 34.

Arthur Conan Doyle's character Brigadier Etienne Gerard of the French Hussards de Conflans has come to epitomise the hussar of popular fiction – brave, conceited, amorous, a skilled horseman and (according to Napoleon) not very intelligent. Brigadier Gerard's boast that the Hussards de Conflans (an actual regiment) could set a whole population running, the men away from them and the women towards them, may be taken as a fair representation of the esprit de corps of this class of cavalry.

Less romantically, 18th century hussars were also known (and feared) for their poor treatment of local civilians. In addition to commandeering local food-stocks for the army, hussars were known to also use the opportunity for personal looting and pillaging. 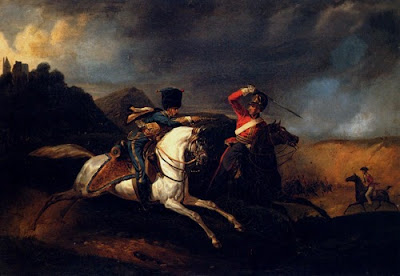 The hussars played a prominent role as cavalry in the Napoleonic Wars (1796–1815). As light cavalrymen mounted on fast horses, they would be used to fight skirmish battles and for scouting. Most of the great European powers raised hussar regiments. The armies of France, Austria, Prussia, and Russia had included hussar regiments since the mid-18th century. In the case of Britain four light dragoon regiments were converted to hussars in 1806–1807.

Hussars were notoriously impetuous, and Napoleon was quoted as stating that he would be surprised for a hussar to live beyond the age of 30 due to their tendency to become reckless in battle, exposing their weaknesses in frontal assaults. The hussars of Napoleon created the tradition of sabrage, the opening of a champagne bottle with a sabre. Moustaches were universally worn by Napoleonic period hussars, the British hussars were the only moustachioed troops in the British Army—leading to their being taunted as being "foreigners" at times. French hussars also wore cadenettes, braids of hair hanging either side of the face, until the practice was officially proscribed when shorter hair became universal.

The uniform of the Napoleonic hussars included the pelisse: a short fur edged jacket which was often worn slung over one shoulder in the style of a cape, and was fastened with a cord. This garment was extensively adorned with braiding (often gold or silver for officers) and several rows of multiple buttons. Under it was worn the dolman or tunic which was also decorated in braid.

On active service the hussar normally wore reinforced breeches which had leather on the inside of the leg to prevent them from wearing due to the extensive time spent in the saddle. On the outside of such breeches, running up the outside was a row of buttons, and sometimes a stripe in a different colour. A shako or fur kolpac (busby) was worn as headwear. The colours of dolman, pelisse and breeches varied greatly by regiment, even within the same army.

The French hussar of the Napoleonic period was armed with a brass hilted sabre, a carbine and sometimes with a brace of pistols, although these were often unavailable. The British hussar was armed, in addition to his firearms, with the 1796 pattern light cavalry sabre. British hussars also introduced the sabretache (a leather pouch hung from the swordbelt) to the British Army.

A famous military commander in Bonaparte's army who began his military career as a hussar was Marshal Ney, who after being employed as a clerk in an iron works joined the 5th Hussars in 1787. He rose through the ranks of the hussars in the wars of Belgium and the Rhineland (1794–1798) fighting against the forces of Austria and Prussia before receiving his marshal's baton in 1804 after the Emperor Napoleon's coronation. 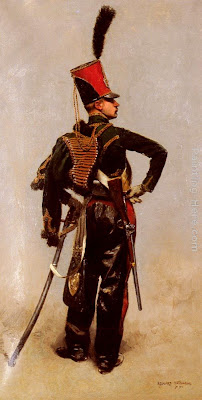 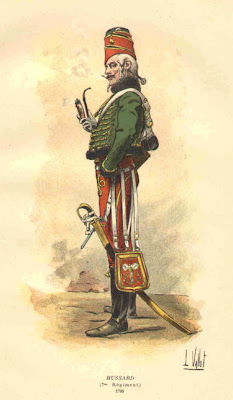 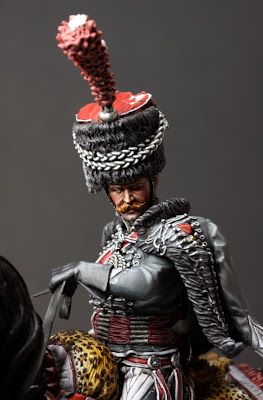 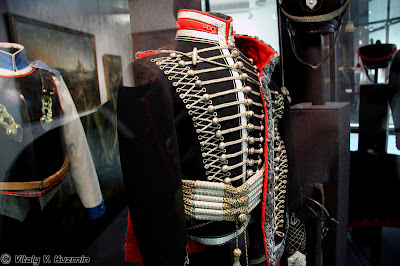 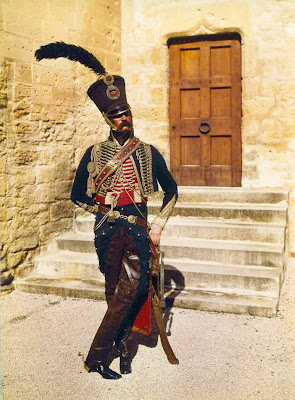