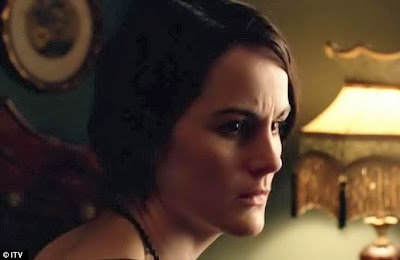 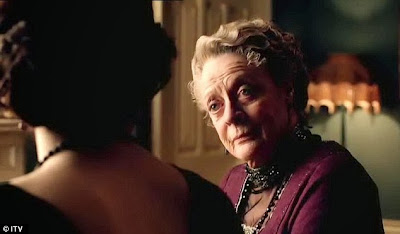 Lady Mary Crawley was left devastated when her husband Matthew was killed in a car crash during the Christmas special.
And in the just-released trailer for Downton Abbey's highly-anticipated fourth season, Mary (Michelle Dockery) is now a mourning single mother.
'You have a straightforward choice before you,' the Dowager Countess of Grantham (Maggie Smith) tells her granddaughter. 'You must choose either death or life.'
Mary then responds: 'And you think that I should choose life?'
The (mostly) silent one-minute preview then flashes glimpses of emotional moments between characters new and old.
Mary is seen meeting two different potential suitors, and receiving a consoling embrace from Carson the butler (Jim Carter).
Now mother of six-month-old baby George, Mary will be pursued by Lord Anthony Gillingham (Tom Cullen), Charles Blake (Julian Ovenden), and Evelyn Napier (Brendan Patricks).
'Gillingham is an old family friend. The sisters knew him when we were growing up, and we haven’t seen him since then. A party is organised at the house, and he is invited to it,' the 31-year-old actress told TV Line.
'He’s just a different character. And there’s other potential suitors, as well. It’s not just him. There’s a character called Blake, played by Julian Ovenden. And Evelyn Napier (played by Brendan Patricks) comes back, as well. He was the one who brought the Turkish diplomat along. That was lovely to play scenes with Brendan again because we haven’t seen him since Season 1. They’re very different.
'And this year, we have a few new characters coming in. Mary's beginning to come back to real life again because it takes her a long, long time to even interact with anyone.'
Lady Rose MacClare (Lily James) appears to take a far more central role at Downton, and dances with a jazz singer named Jack (Gary Carr, a British actor who plays an American on the show).
Rose personally welcomes the show's first African-American character, who noticeably enters the lavish estate from downstairs.
The normally dowdy Lady Edith Crawley (Laura Carmichael) embraces the flapper-filled 1920s by baring her shoulders in a modern halter frock.
Both Daisy the assistant cook (Sophie McShera) and Bates the valet (Brendan Coyle) are seen breaking down in tears.
Widower and single father Tom Branson the estate manager (Allen Leech) gets a love interest, and comforts Matthew's mother Isobel (Penelope Wilton).
And head housekeeper Mrs. Hughes (Phyllis Logan) confronts a mysterious older man in what appears to be a factory.
Set between 1922-1923, the fourth season will premiere in the UK this September on ITV and in the US on January 5 on PBS' Masterpiece Classic.
And while Dan Stevens and Siobhan Finneran have now exited the series - Paul Giamatti, Nigel Harman, Julian Ovendon, and opera singer Dame Kiri Te Kanawa have all joined season four.
And fans of the show will be pleased to know that while season four hasn't even premiered yet, the cast have already signed up for season five.
Michelle said: 'As far as we know, we're all doing season five next year. Beyond that, we really don't know.'
Downton Abbey is up for 12 Emmy nominations on September 22, including nods for Dockery, Smith, Carter, and Hugh Bonneville. 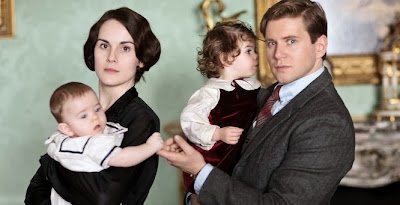 A triumvirate of women made last night’s opening instalment of the fourth series of Downton Abbey (ITV) a glowing success. A great deal rested on this episode. The capacious hole rendered by the death of Matthew Crawley, handsome hero and heir to the estate, was one it wouldn’t be easy to fill. Julian Fellowes did well then to embrace his absence and instead of trying to distract us with too much below stairs frippery, placed Matthew’s grieving wife centre stage.
And how excellently Michelle Dockery filled it. Her character, Lady Mary, was once an ice maiden until Matthew melted her. Here she was back to her frigid best, all hooded eye-lids, chiselled profile, cadaverous frame shrouded in jet black silks: a beautiful raven.
Dockery is blessed with a voice several registers lower than most females, which gave every utterance of misery weight, but it was when she wasn’t speaking that mattered most. The moment of quiet triumph in the episode, the one which signified that Fellowes was Back On Form after the somewhat choppy Matthew-murdering Christmas special, was when Mary came down the grand staircase towards Downton's great hall and was suddenly arrested by the view before her.
She was looking at just an angle of banister and the corner of a room, but it was the spot where she and Matthew had kissed. It was deftly understated, and Dockery wrenched our hearts with the poise of her head and empty eyes. I found myself expecting a spectre of Matthew to appear to look up at her, like Rose remembering Jack on the staircase of Titanic in the James Cameron film, but no such atrocity occurred.
The other marvellous females in the episode were Maggie Smith as the Dowager Countess and Penelope Wilton as Matthew’s mother Mrs Crawley. Smith gave us humour, and Wilton gave us a masterclass in how the older generation does tragedy. As often, the Dowager Countess, with her wise counsel, was the engine of the most significant event in the episode: Mary’s recovery, when she finally shed the black for lilac. But Dame Maggie also gave us high hilarity, particularly when sparring off the fine Harriet Walter in a cameo as a neighbouring grandee. While Wilton expressed excoriating pain for the loss of her son just by staring at the chin of whomever she was talking to.
Elsewhere it was business as usual, Lord Grantham bumbled, Cora talked sense. The erstwhile chauffeur (Allen Leech, much better now he’s above stairs) is clearly being groomed for something big. Nothing that happened to the servants seemed to matter much, but then Fellowes has always been better at writing posh than common, or at least making it plausible.
And then there was the masterstroke, the one that indicated that Downton Abbey is now so in touch with the life of the country that it has taken on powers of prescience. Not only had Mary and Matthew’s baby been christened George, but he was referred to as Prince George. It was a joke, I think, but you can’t be sure. This heir apparent is nearly as much the nation’s prince as the real one. 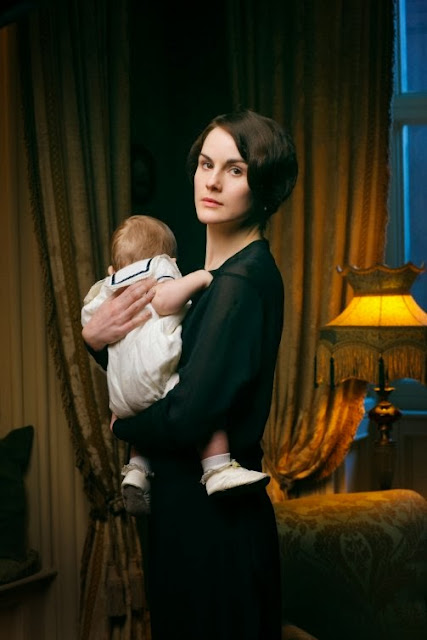 Downton Abbey series four premiere – TV review
Downton Abbey returns, even though some of its best actors haven't – can we bring back the glamour?

Where's the dog? I used to enjoy following Lord Grantham's faithful wagging friend, under the cedar, towards the big house, in the opening credits of Downton Abbey (ITV). Plus it gave me a sense of my own place in the social hierarchy – behind and a little below labrador-arse level. Don't tell me he's gone and upped sticks too, to pursue a career in Hollywood?

Someone else is leaving, sneaking off in the middle of the night. Jesus, they're running like rats from a sinking ship. Drownton. Please make it Bates …

Oh, it's O'Brien, off to the subcontinent. Well, I won't miss that old bag of bitterness much either, not like lovely Lady Sybil. And Matthew is no longer, of course, killed off so suddenly and rudely at Christmas, for Dan Stevens to become the deputy editor of the Guardian in a movie about Wikileaks.

Leaving what behind? A handful of widows, widowers, orphans and ghosts, rattling round Downton Abbey. With all of the energy and kindness and softness drained out of them. Lady Mary is basically Miss Havisham now: she wanders the corridors and staircases, only really there in body and hardly even that. If you touched her she'd surely turn to dust.

Opinions are divided about Nanny West, about the best way to deal with grief, the best way to run the estate, and who should be doing it – like series one all over again. Lord and Lady Grantham are stuck in bed, most probably for ever, not through illness but because O'Brien is no longer there to help them get up. It may be 1922 now – with restaurants, jazz, dancing, kissing even – up in London, but out here in the sticks the toffs are still unable to get dressed by themselves. Oh, Mrs Hughes is going to help, but for one day only. I'd find it so odd having someone else – a person I employed – wandering around my bedroom in the morning. But then I'm lower than a yellow lab, as we've already established.

Downstairs, Daisy gets a Valentine card, from Mrs Patmore – out of pity, not passion, I'm afraid. Carson gets an unwelcome letter from an old pal from another life, now living in the workhouse. Will Downton become a rescue centre perhaps, for the forgotten and the unwanted? Not if Carson has anything to do with it.

Matthew's miserable valet Molesley mopes about without a purpose, his master having spent the past six months six feet under. Bates … AGGGHHH, I HATE BATES, did I mention? Even the new maid, O'Brien's replacement, isn't new; she's worked here before. The most exciting thing is the arrival of a food processor.

It's not the most auspicious of openers to the new season of the posh soap. There's a dustiness and a mustiness about the place, a sense of same-old, same-old. Downton Drabbey. Even Dame Maggie's withering one-liners aren't as sharp as they once were. Dan Stevens's absence leaves an unfilled hole, just as Jessica Brown Findlay's did before. Yes, I do mean there's a dearth of talent about the place, a lack of glamour. That's mostly the point of DA, right?

This is a bit like how it's felt to be an Arsenal supporter recently – with the best players leaving, and the ideas running out. Only Downton didn't get its superstar in the transfer window. OK, so Lady Edith's new fella, this publishing chap in town, says he's willing to become a German in order to be with her. But he ain't Mesut Özil, is he?

How the hell did he get in here? Well, maybe he should be. I'd clean the whole place out, get rid of the lot of them – more car crashes, bad births, hunting accidents, whatever. Any who somehow survive can be forced out by crippling death duties and packed off to live in modest Victorian terraces. Then we can fast-forward 90 years or so, cut to when Downton Abbey has become a posh wedding venue for footballers. With Range Rovers and Bentley Continentals parked up on the gravel, and a luxury spa and gym down in Carson's old kingdom. That would get a bit of sparkle back into the old place. Downton Abi, they might call it.

On the subject of wags, there is some good cast news. Maybe not a thrilling new glamour signing, but a familiar friendly face at least. Well, arse. The dog, Isis, may have been sacked from the opening credits, but here he is, alive and well, on a tour of the estate with his master. That's a relief. 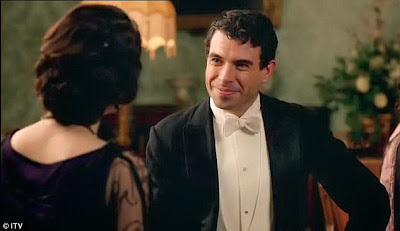 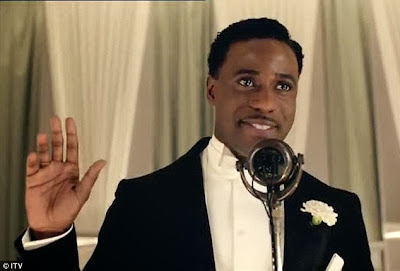 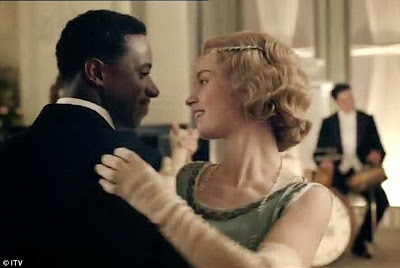