The Return of the beard.The 100 Beards Project by Jonathan Daniel Pryce. 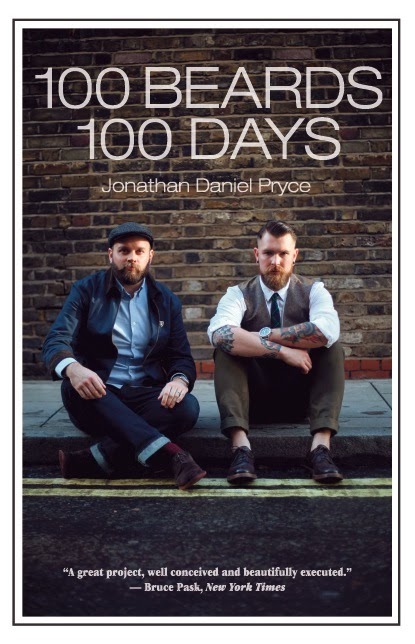 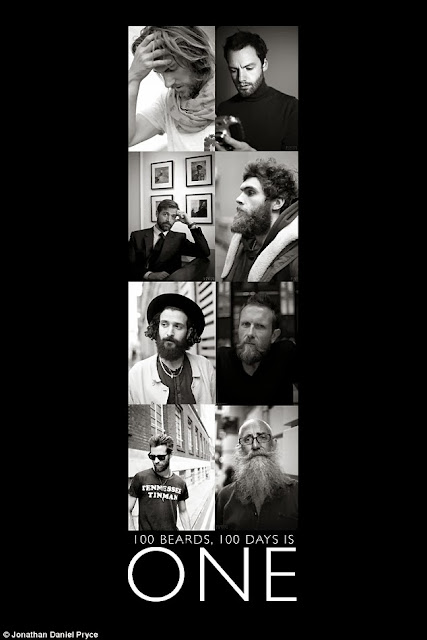 The 100 Beards Project is one year old. You can pre-order a copy of the book at 100beards.bigcartel.com 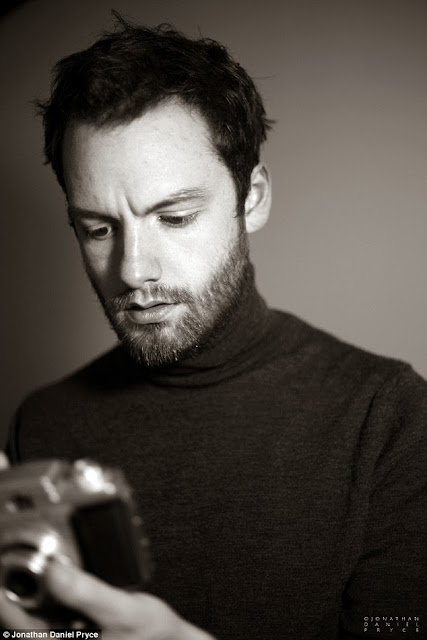 Jonathan Daniel Pryce
'When I first started the 100 Beards project, I had a lot of people Tweeting me asking if I had a beard myself. I didn't, and so as tribute I decided to try growing one for the first time'

Beards make men look like they could save you from danger... and let baldies have a different hairstyle everyday: Face fuzz celebrated in brilliant new blog
Jonathan Daniel Pryce takes photos of beards, man's 'ultimate accessory'
Women of the web have gone into frenzy over 'hunky pictures'
'Beards rule for baldies. Only way we can get a fresh hairstyle'

George Clooney, Bradley Cooper, Ben Affleck and that John Lewis model all have one thing in common: a brilliant, bang-on-trend beard.
Facial fuzz has become the must-have accessory for stylish men about town, from grey-flecked designer stubble on the Central Line to fearsome facial furniture being displayed at your local pub.
And now the women of Britain can't seem to get enough as news of photo project 100 Beards 100 Days spreads like wildfire through social media.
Fashion blogger Jonathan Daniel Pryce set about trying to capture this furry fashion moment through the photo series - a celebration of all things beardy.
The 100 Beard project started in 2012 and has been so successful Pryce has carried on taking pictures and is now at well over 200. And the women of the web are sharing the love for his work.
Natasha Louisa Davie says beards on men such as those featured in Pryce's project look like they have a 'stronger jaw'.
'They look more manly, and beards are fun to run my fingers through.'
Zoe Liana Brockett went a step further sharing her love of Pryce's bearded blokes lies in the fact: 'They look like they could save you from danger, like a fire or if you were stuck on a mountain!'
A self-confessed bearded baldie said: 'Beards rule for baldies. Only way we can get a fresh hairstyle.'
Deborah-Louise Grant said: 'They look like they're too busy building things and rocking out to care about shaving,' while Victoria Morgan commented bears like these make men 'look more manly'.
Georgia Frost said: 'They are just sexier, more manly. A man with a clean shaven face looks like a boy,' as Julie Jones confessed 'in our world of well-groomed metrosexuals us girls need a little caveman to remind us of the Alpha'.
The girls of Twitter have also got in a flutter as @apalanca shared a link to the blog saying 'Hunky men with beards,' as @amylilyhowes said: 'How about ALL of the beards in ALL of the days?'
Pryce, the blog's founder, men's style expert and editor of style site GarconJon.com said:
'Over the past few years, the beard has re-established itself as the ultimate accessory for the modern gentleman. To document this, every day for 100 days I photographed a new beard on the streets of London.
'From big and bushy to trendy and trimmed, I found men from all cultures and creeds who signed up to the cult of the beard.
'For me, the beard represents authenticity and masculinity in equal parts. In a time of uncertainty, like a global financial crisis, it makes sense that this is how men want to be seen. Also if we consider the beard as a fashion trend, it's the best accessory a man can own - it's free, completely unique, very personal and not too flashy,' says Pryce.
'As a trend, the beard won't last. That's the nature of trends - they come and go. However, I reckon the resurgence of the appreciate of the hirsute is here to stay for a while. Once you've dedicated time and energy cultivating a beard it's unlikely you'll be giving it up at the drop of a hat. For many of the men I photographed their beard wasn't trend-led, it was as much a form of personal expression as the hair on their head.
'It's so difficult to place as there is a huge variety. For me I think density, colour and shape are all important factors. I've photographed one man with a huge sprawling white beard  - completely unkempt and natural. That's equally as impressive as then gent with a tightly clipped thick bright red beard.
'The 100 Beards, 100 Days project started on July 1st 2012 and the original concept was simple. I went out to different neighbourhoods in London every day for the next 100 days until October 8th, and over that period the blog had really exploded. In the final month, nearly every guy I stopped to be photographed had heard of the blog which was incredible. I was receiving comments, Tweets & emails en mass from fans of facial hair asking to continue documenting London's beards, so I decided to continue.
'I've been taking beard portraits for 13 months now, mostly in London but also in Paris, Milan and Berlin. I've now reached number 146 on the blog, but I'm planning to have 200 beard portraits for the release of the book next month. Possibly the hardest part of this kind of work is selecting the portraits to use. I've photographed more than 200 men, but only the right portraits get used. The book will include funny quotes and anecdotes about their beards from the subjects.
'When I first started the 100 Beards project, I had a lot of people Tweeting me asking if I had a beard myself. I didn't, and so as tribute I decided to try growing one for the first time. I spent about 8 weeks working on getting some good growth and on Day 100 took a self-portrait to complete the first chapter.
'One of the reasons I became interested in beards was my own inability to grow a good one. Beards have this mysterious masculinity attached to them and to grow a strong one is like the holy grail of authenticity. Once I got past the itchy phase of the beard I started to enjoy it, but mine pales in comparison to the men I photographed so it's now gone. Stubble will have to be enough for me.
'During the 100 days, from July 1 to October 8 2012, the 100 beard project received a huge amount of support, so much so I decided to continue. I want to thank everyone from readers to press who shared the project and appreciated the work.'
The initial 100 Beard project has already been immortalised in a book, with another on the way, but more recently it has seen a slew of new interest from female fans of facial hair, as women around Britain have been sharing Jonathan's Tumblr account via Facebook and Twitter, often with 1,500 comments per picture. 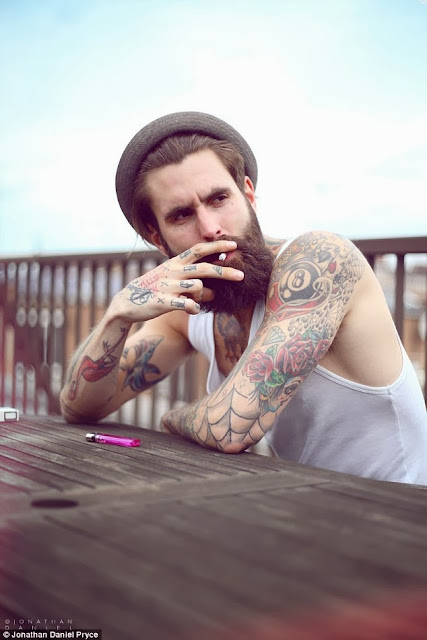 'This was one of the most popular photographs I captured. Ricki Hall is a model and has an incredible beard. One search on Google will reveal why the photo got such a great response - he has a huge fan base' 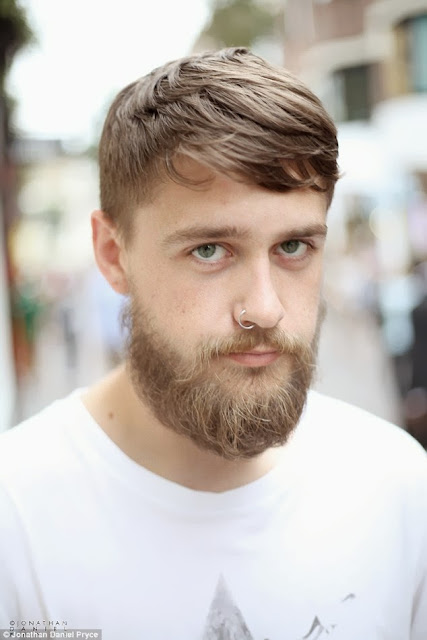 Lloyd: Carnaby Street, London. Number 67 from 5 Sep 2012. Pryce: 'Photographed on Canaby Street, Lloyd is one of the youngest guys I photographed. For me, it's his photo which shows why the beard is popular for young men - it's their first chance to experiment with being a grown-up man and tell that to the world' 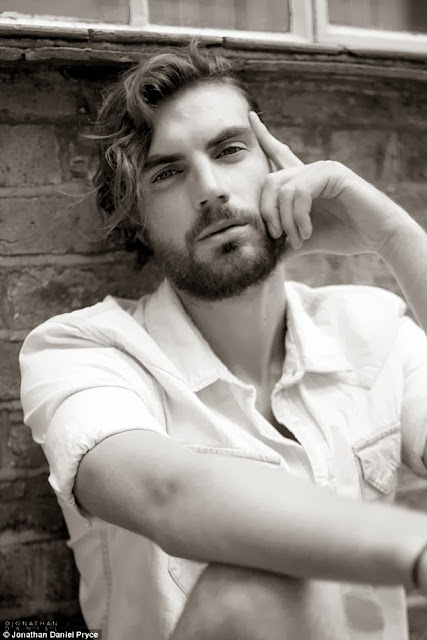 An intense photograph of Daniel on Old Church Street, London. Number 51. from 20 Aug 2012 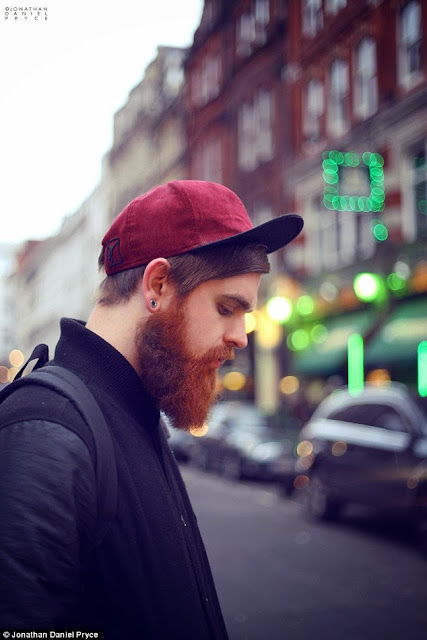 Brendan sports an auburn beard as he stands on Henrietta Street, London. Number 123. from 26 Apr 2013 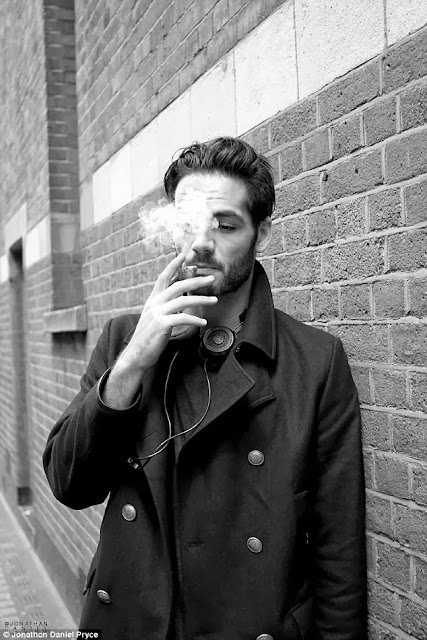 James takes a slow drag on a cigarette as he leans against a wall on Greek St, London on 18 Jul 2012 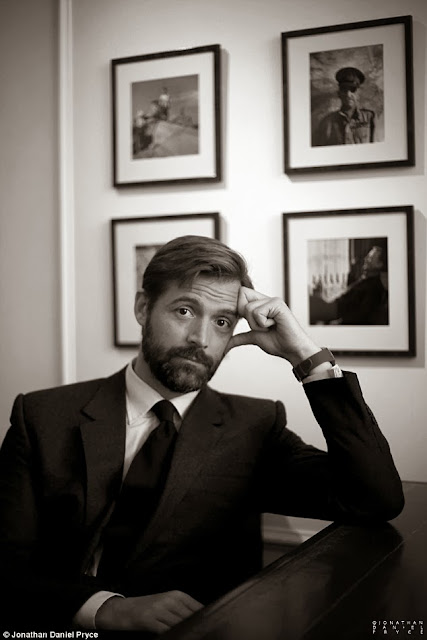 'Patrick Grant is a Saville Row tailor for Etautz and has become something of a British style institution. He's certainly one of London's best dress men and was recently a judge on the BBC's Great British Sewing Bee' 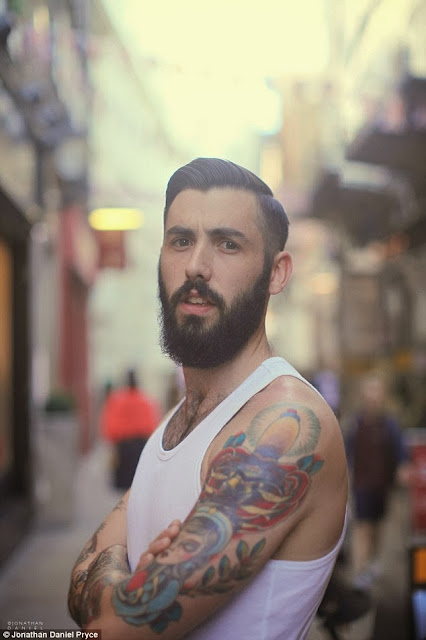