O'MAST from Kid Dandy on Vimeo. 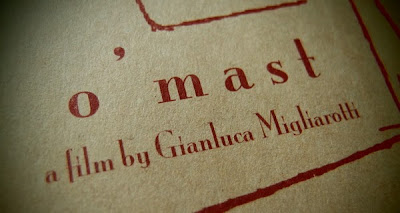 The film was presented at NYU’s Casa Italiana Zerilli Marimò as part of the series AdDRESSING Style organized by Grazia d’Annunzio, special projects editor, Vogue Italia, and Eugenia Paulicelli, Professor of Italian and comparative literature and the member of faculty of the Certificate Program in Women’s Studies at CUNY Graduate Center. After a brief introduction by the Casa Italiana’s director Stefano Albertini, the sizable audience was presented with the screening of the brilliant documentary.
What is the first thing that comes to your mind when Naples is mentioned?
Whether it is a story that someone told you, or one of your own experiences, it is likely to be a story in which the clever Neapolitan outsmarts the naïve tourist. It is this stereotypical image Naples has difficulties abolishing. Thanks to the efforts of citizens like Gianluca Milgiarotti the city will be seen in a completely different light and its bad reputation will soon be forgotten.
Naples native, Gianluca Migliarotti, attended NYU Film School and The Lee Strasberg TheaterInstitute in New York. After returning to Italy he founded Kid Dandy Productions, a boutique company producing short films, documentaries and commercials based in Milan. His latest creation is O’Mast, a 67-minute documentary on the Neapolitan tailoring tradition.

On November 30th, the film was presented at NYU’s Casa Italiana Zerilli Marimò as part of the series ADDRESSING Style organized by Grazia d’Annunzio, special projects editor, Vogue Italia, and Eugenia Paulicelli, Professor of Italian and comparative literature and the member of faculty of the Certificate Program in Women’s Studies at Cuny Graduate Center. After a brief introduction by the Casa Italiana’s director Stefano Albertini, the sizable audience was presented with the screening of the brilliant documentary.

Migliarotti not only demonstrated his superb directing skills, but also offered the viewers an “insider” view of the sartorial craft and did so with the utmost skill of keeping the audience attentive, engaged and craving for more. While familiarizing the viewers with the life and work of some of the best Neapolitan tailors, (among others the film features interviews with renown tailors such as Mariano Rubinacci and Claudio Attolini) Migliarotti sneaks in breathtaking views of his beloved Naples, juxtaposing shots of architectural motifs and seaside panoramas with close-ups of luxurious fabrics, buttons, and meticulous stitching. This surprisingly harmonious compilation provides not only a cinematographic delight to the eye, but together with the music creates a solid backdrop for the film and introduces viewers to another side of Naples, the one that Migliarotti wants so desperately to reveal.

The screening of the film was followed by a panel discussion between Eugenia Paulicelli, Stefano Albertini and Gianluca Migliarotti. Ms. Paulicelli praised the film: “There is an urgent message in this film, it’s communicated through beauty not through horror. There’s a sense of community, working together.” Milgiarotti replied: “Kids in Naples are not educated. They look for heroes in the wrong things, in films like Gomorrah. And I hope they will find their heroes instead in these men.” She asked Migliarotti if his presentation of Naples as a beautiful and vibrant city was intentional and he stated: “ To me it was more about the colors, I wanted to emphasize the colors of the city and the colors of the fabrics. Anywhere one lives inspires the way one dresses, therefore [the Neapolitan dress code] is different than the dress code of Milan.” The young film director then answered numerous questions from the audience.

I couldn’t resist asking a few questions of my own. Here is my brief conversation with Gianluca:

I.A.: What prompted you to do a documentary on this particular subject?

G.M.: Passion and respect. Passion for the bespoke and respect for the craftsmen.
Love for my hometown too is one of the possible reasons. I wanted to show another side of Naples and its culture, a side that not many know, only Neapolitans.

I.A.: Is this film in anyway a protest of globalization?

I.A.: Why did you decide to show only the "best" parts of Napoli and not the Napoli known to the world?

G.M.: As I said, and as you said those are pictures that everyone knows already. I don't want to hide anything, I just want to show another side, full of beauty and positivity. How could people still live in Naples if it was as bad as they say? There must be something positive.

I.A.:  Did you want the architectural motifs of the city to be seen as a parallel to the shots of fabric and close-up shots of the tailored details? (both by the way photographed and presented with STYLE and GRACE)

G.M.: Thank you! Yes, I did it on purpose. I think the elegance of the forms and colors of the architecture influenced quite a bit the so-called Neapolitan style. The structure and the fabric are the architecture of the suit, like the skin and bones are for the body. It's just on another level, that I wouldn’t call superficial but just "external."

I.A.:  Did you consider making a series of films on artisan crafts? Why or why not?

G.M.: I have to say that I don't like series and I make my films on what really catches my interest. But I have to admit that so far I've done a few documentaries on craftsmen, like a barber and a silversmith who became designer thanks to Gio Ponti.It seems that we are also going to shoot another documentary on a great tailor from Florence soon.