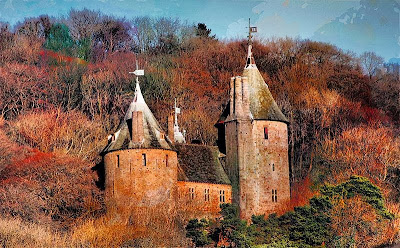 Castell Coch is a 19th-century Gothic Revival castle built on the remains of a genuine 13th-century fortification, cared for by Cadw, the Welsh Government's historic environment service. It is situated on a steep hillside high above the village ofTongwynlais, to the north of Cardiff in Wales, and is a Grade I listed building as from 28 January 1963.

Designed by William Burges, with an impressively medieval appearance, working portcullis and drawbridge, and sumptuous interiors which rival those of Cardiff Castle, it has been described as "the most spectacular example of [that architect's] translation from High Gothic into High Victorian."
Castell Coch was built on the site of a 13th-century castle. The earlier fortification was constructed by a Welsh chieftain referred to as Ifor Bach ("Little Ivor"). In the late 13th century the castle site was claimed by the De Clare family because of its strategic importance, commanding both the plains area and the entrance to the Taff valley. The castle was rebuilt in stone and consisted of a keep, towers, an enclosed courtyard and a gatehouse. Although the early history of the castle is largely undocumented, it is generally accepted that it was severely damaged during a period of Welsh rebellion in the early 14th century. Thereafter, the castle fell into disuse and by Tudor times, the antiquary John Leland described it as "all in ruin no big thing but high".
In 1871, John Crichton-Stuart, 3rd Marquess of Bute, ordered the site to be cleared of vegetation and debris while his architect, William Burges, drew up plans for a full reconstruction. Burges and the Marquess had been working for over three years on the rebuilding of Cardiff Castle; the aim at Castell Coch was to achieve another "dazzling architectural tour de force of the High Victorian era, a dream-like castle which combined sumptuous Gothic fantasy with timeless fairy tale."
A set of drawings for the planned rebuilding exists, together with a full architectural justification by Burges. The castle reconstruction features three conical roofs to the towers that are historically questionable. Burges sought to defend their use with references to a body of doubtful historical evidence but: "the truth is that he wanted them for their architectural effect." He did admit that they were "utterly conjectural" although "more picturesque and (...) affording much more accommodation", contending that:
"It is true that some antiquaries deny the existence of high roofs in English Mediaeval Military Architecture, and ask objectors to point out examples. As nearly every Castle in the country has been ruined for more than two centuries...it is not surprising that no examples are to be found. But we may form a very fair idea of the case if we consult contemporary (manuscripts) and if we do we find nearly an equal number of towers with flat roofs as those with pointed roofs. The case appears to me to be thus: if a tower presented a good situation for military engines, it had a flat top; if the contrary, it had a high roof to guarantee the defenders from the rain and the lighter sorts of missiles. Thus an arrow could not pierce the roof, but if the latter were absent and the arrow was fired upright, in its downward flight it might occasion the same accident to the defenders as happened to Harold at Hastings."
Burges's report on the proposed reconstruction was delivered in 1872 but construction was delayed until part because of the pressure of work at Cardiff Castle, and in part because of an unfounded concern on behalf of the Marquess's trustees that he was facing bankruptcy.But in August 1875 work began in earnest. The exterior comprises three towers, "almost equal to each other in diameter, but arrestingly dissimilar in height." They form an awesome display of architectural power and ability. In a lecture, Burges called on architectural students to "study the great broad masses, the strong unchamfered lines".
The Keep tower, the Well Tower and the Kitchen Tower incorporate a series of apartments, of which the main sequence, the Castellan's Rooms, lie within the Keep. The Hall, the Drawing Room, Lord Bute's Bedroom and Lady Bute's bedroom comprise a suite of rooms that exemplify the High Victorian Gothic style in 19th century Britain. They begin weakly: the Banqueting Hall, completed well after Burges's death, is "dilute(,...) unfocussed"[9] and "anaemic." The Drawing Room is "more exciting", a double-height room with decoration illustrating the "intertwined themes (of) the fecundity of nature and the fragility of life." A superb fireplace by Thomas Nicholls features the Three Fates, spinning, measuring and cutting the thread of life. The octagonal chamber with its great rib-vault, modelled on one designed by Viollet-Le-Duc at Councy, is "spangled with butterflies and birds of sunny plume in gilded trellis work." Off the hall, lies the Windlass Room, in which Burges delighted in assembling the fully functioning apparatus for the drawbridge, together with "murder holes" for expelling boiling oil. The Marquess's bedroom provide some "spartan" respite before the culmination of the castle, Lady Bute's Bedroom.
The room is "pure Burges: an arcaded circle, punched through by window embrasures, and topped by a trefoil-sectioned dome." The decorative theme is 'love', symbolised by "monkeys, pomegranates, nesting birds". The decoration was completed long after Burges's death but his was the guiding spirit; "Would Mr Burges have done it?" William Frame wrote to Thomas Nicholls in 1887.
Following Burges' death in 1881, work on the interior continued for another ten years. The castle was not used much: the Marquess never came after its completion, and the family appeared to use it as a sort of sanatorium, although the Marchioness and her daughter, Lady Margaret Crichton-Stuart, did occupy it for a period following the death of the Marquess in 1900. But the castle remained "one of the greatest Victorian triumphs of architectural composition," summing up "to perfection the learned dream world of a great patron and his favourite architect, recreating from a heap of rubble a fairy-tale castle which seems almost to have materialised from the margins of a medieval manuscript."
In 1950, the 5th Marquess of Bute placed the castle in the care of the Ministry of Works. It is now administered by Cadw, an agency of the Welsh Government. Ths castle is Grade I listed, of exceptional architectural and historical interest. 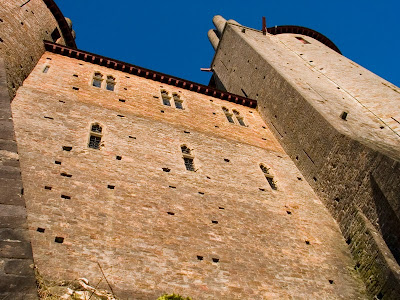 William Burges (2 December 1827 – 20 April 1881) was an English architect and designer. Among the greatest of the Victorian art-architects, he sought in his work to escape from both nineteenth-century industrialisation and the Neoclassical architectural style and re-establish the architectural and social values of a utopian medieval England. Burges stands within the tradition of the Gothic Revival, his works echoing those of the Pre-Raphaelites and heralding those of the Arts and Crafts movement.

Burges's career was short but illustrious; he won his first major commission for Saint Fin Barre's Cathedral in Cork in 1863, when he was 35, and he died, in 1881, at his Kensington home, The Tower House, aged only 53. His architectural output was small but varied. Working with a long-standing team of craftsmen, he built churches, a cathedral, a warehouse, a university, a school, houses and castles. Burges's most notable works are Cardiff Castle, constructed between 1866 and 1928, and Castell Coch (1872–91), both of which were built for John Crichton-Stuart, 3rd Marquess of Bute. Other significant buildings include Gayhurst House, Buckinghamshire (1858–65), Knightshayes Court (1867–74), the Church of Christ the Consoler (1870–76) and St Mary's, Studley Royal (1870–78) in Yorkshire, and Park House, Cardiff (1871–80).

Many of his designs were never executed or were subsequently demolished or altered. His competition entries for cathedrals at Lille (1854), Adelaide (1856), Colombo, Brisbane (1859), Edinburgh (1873), and Truro (1878) were all unsuccessful. He lost out to George Edmund Street in the competition for the Royal Courts of Justice (1866–67) in The Strand. His plans for the redecoration of the interior of St Paul's Cathedral (1870–77) were abandoned and he was dismissed from his post. Skilbeck's Warehouse (1865–66) was demolished in the 1970s, and work at Salisbury Cathedral (1855–59), at Worcester College, Oxford (1873–79) and at Knightshayes Court had been lost in the decades before.

Beyond architecture, Burges designed metalwork, sculpture, jewellery, furniture and stained glass. Art Applied to Industry, a series of lectures he gave to the Society of Arts in 1864, illustrates the breadth of his interests; the topics covered including glass, pottery, brass and iron, gold and silver, furniture, the weaver's art and external architectural decoration. For most of the century following his death, Victorian architecture was neither the subject of intensive study nor sympathetic attention and Burges's work was largely ignored. However the revival of interest in Victorian art, architecture, and design in the later twentieth century has led to a renewed appreciation of Burges and his work.

In 1865, Burges met John Patrick Crichton-Stuart, 3rd Marquess of Bute. This may have resulted from Alfred Burges's engineering firm, Walker, Burges and Cooper, having undertaken work on the East Bute Docks in Cardiff for the second Marquess in 1855. The 3rd Marquess became Burges's greatest architectural patron; both were men of their times; both had fathers whose industrial endeavours provided the means for their sons' architectural achievements, and both sought to "redeem the evils of industrialism by re-living the art of the Middle Ages".

On his succession to the Marquessate at the age of one, Bute inherited an income of £300,000 a year, and, by the time he met Burges, he was considered the richest man in Britain, if not the world. Bute's wealth was important to the success of the partnership: as Burges himself wrote, "Good art is far too rare and far too precious ever to be cheap." But, as a scholar, antiquarian, compulsive builder and enthusiastic medievalist, Bute brought more than money to the relationship and his resources and his interests allied with Burges's genius to create what McLees considers to be "Bute's most memorable overall achievement."

"A prime example of the partnership of aristocratic patron and talented architect producing the marvels of Cardiff Castle and Castell Coch."
—Dixon and Muthesius characterising the relationship between Burges and Bute

However occasioned, the connection lasted the rest of Burges's life and led to his most important works. To the Marquess and his wife, Burges was the "soul-inspiring one". The architectural writer Michael Hall considers Burges's rebuilding of Cardiff Castle and the complete reconstruction of the ruin of Castell Coch, north of the city, as representing his highest achievements. In these buildings, Crook contends that Burges escaped into "a world of architectural fantasy" which Hall describes as "amongst the most magnificent the Gothic Revival ever achieved." 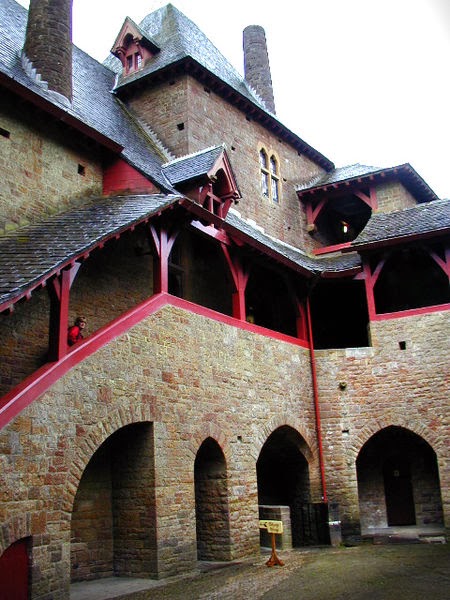 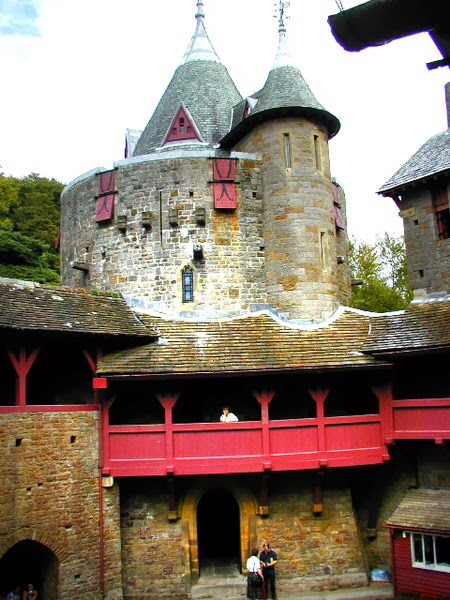 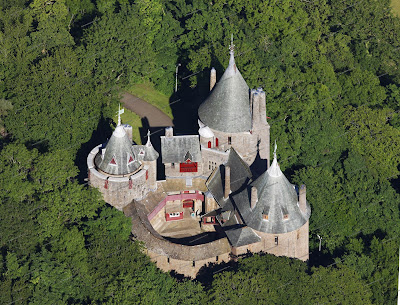 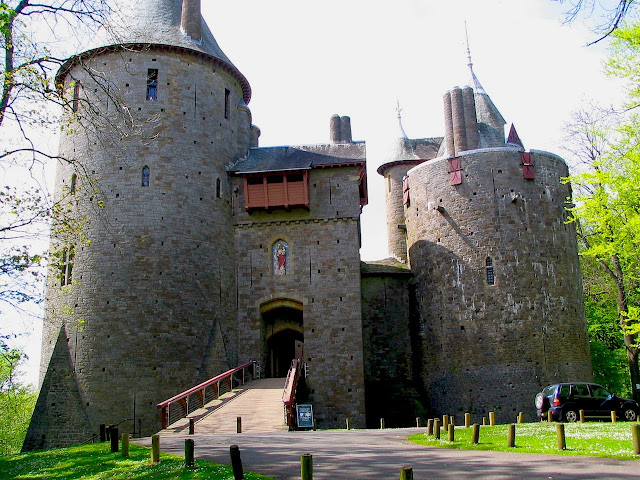 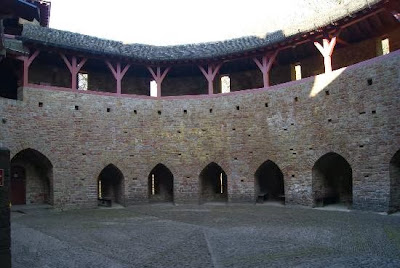 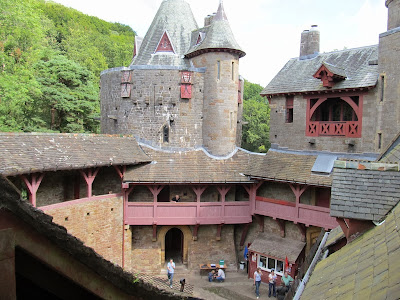 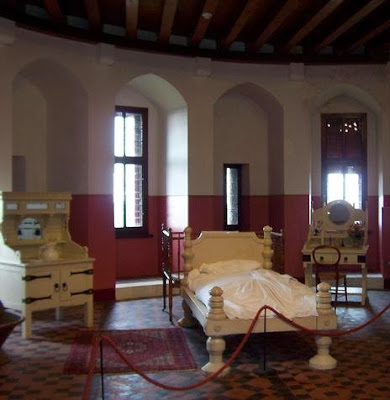 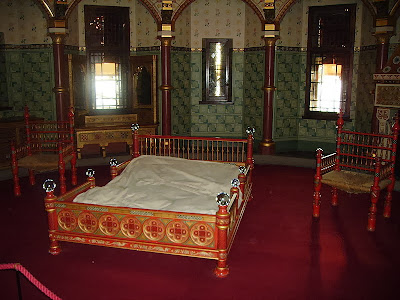 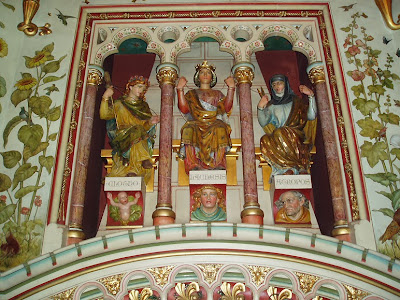 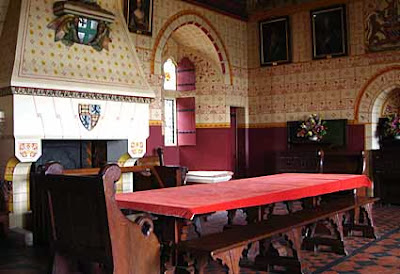 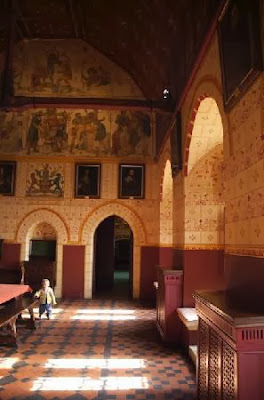 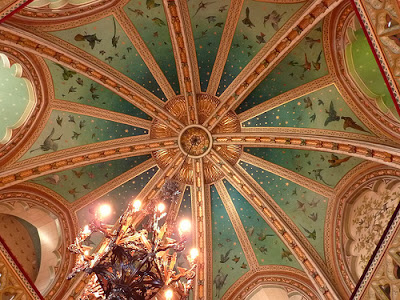 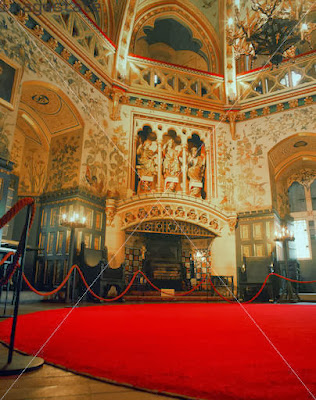 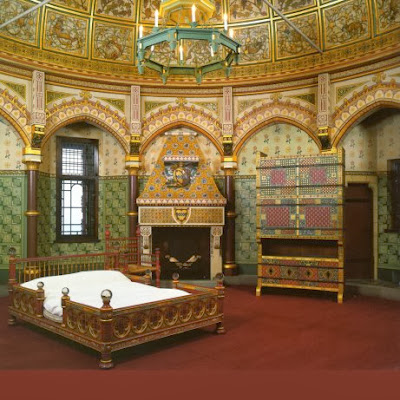 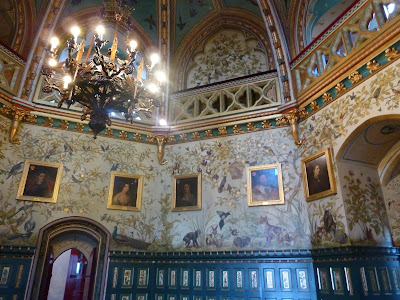