BEHIND THE HEDGEROW takes viewers inside the private world of aristocratic Newport, Rhode Island


Behind The Hedgerow Teaser Trailer from Harry Cawthorn on Vimeo. 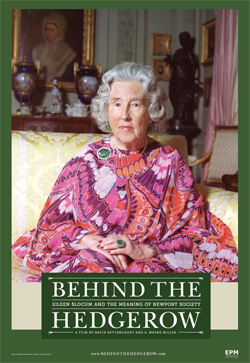 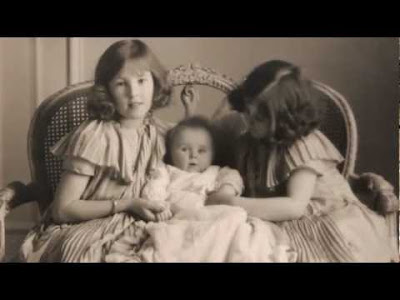 BEHIND THE HEDGEROW takes viewers inside the private world of aristocratic Newport, Rhode Island –– a world of privilege that began with the Gilded Age, when Vanderbilts and Astors reigned. The story is told through the focus of Eileen Gillespie Slocum, descendant of Browns (as in Brown University) and friend to all of the 20th century Newport (and New York and Philadelphia) elite. When Slocum died on July 27, 2008, at the age of 92, a storied period of American history ended, as The New York Times noted in her obituary. Slocum was the last of the Newport grand dames –– and one of the last grand dames anywhere. She left no successor. America had changed, and so had the world; a new moneyed class now ruled, though the descendants of the Gilded Age elite (many of them on-camera in this film, the first time ever) continue to live on and near Bellevue Avenue, Newport, still one of America's most exclusive addresses...
This is an exclusive, inside look at a vanishing society, placed in historical context and providing a deeper understanding of what F. Scott Fitzgerald meant when he observed: “Let me tell you about the very rich. They are different from you and me.”
Because of Eileen Slocum’s stature, her relationships with virtually everyone in the world of old money, her long life, and her intelligence and candor, BEHIND THE HEDEGEROW is uniquely positioned to entertain, inform and, in certain passages, amuse audiences.
The audience filled Providence's Veterans Memorial Auditorium on Aug. 10, 2010, at the film's world premiere, the opening-night featured presentation of the 2010 Rhode Island International Film Festival, and people were turned away Aug. 14 at the sellout Newport premiere of HEDGEROW. A month-long run at Newport's historic Jane Pickens Theater followed.
And Hedgerow has earned rave reviews from critics, including four stars from The Providence Journal. The film was featured on NPR's Morning Edition, WRNI-102. 7 FM in Providence, several times on GoLocalProv, and many other places. This link will take you to all the news and reviews.

Slocum inherited her wealth from a banker father and a mother who was descended from Nicholas Brown, whose philanthropy led officials in 1804 to change the name of the College of Rhode Island to Brown University. Slocum was opinionated. She was kind and generous to family and friends -- and could be a harsh employer. She belonged to all of the exclusive clubs. She was a friend of royalty, presidents, senators, governors, billionaires, bankers, America’s Cup sailors, writers, musicians, artists, curators, debutantes, fellow heirs and heiresses, Doris Duke, and Sunny and Claus von Bulow. She was known for her elegance, wit, teasing ways and conservative politics, especially her anti-abortion views –– and the lavish dinner parties, receptions and balls that she hosted for more than half a century at her 459 Bellevue Avenue estate, whose interiors were designed by Ogden Codman Jr., with landscaping by Frederick Law Olmstead. An invitation to an Eileen Slocum party was coveted, and could not be refused (or bought).
Director David Bettencourt and producer/writer G. Wayne Miller bring this story to the screen through the use of rare footage and still photographs from a multitude of sources, through filming of key Newport Society events during the summer of 2009 (such as Coaching Weekend) and through the on-camera interviews of people in Eileen Slocum’s set and Slocum’s family. The filmmakers utilize Slocum’s extensive personal archive of photographs, books, belongings and papers –– notably the diaries she began keeping at the age of nine as she was growing up in an eight-story mansion at the corner of New York’s 89TH Street and Fifth Avenue. She continued to write these diaries into the 1990s. They are an intimate and never-before-seen account of life behind the hedgerow.
The filmmakers enjoyed exclusive access to Slocum’s archives -- and to her Bellevue Avenue mansion, where much of the film was shot -- through an agreement they reached with Slocum’s children: Jerry Slocum, Margy Slocum Quinn and Beryl Slocum Powell. Under this same agreement, Miller and Bettencourt also enjoyed access to the archives of Slocum’s late husband, John Jermain Slocum. A diplomat, Harvard classmate and friend of David Rockefeller, and bibliophile, John Slocum gathered the world’s foremost James Joyce collection, which now resides in Yale University’s Beinecke Rare Book and Manuscript Library. A noted patron of the arts until his death in 1997, Slocum and his wife counted Henry Miller, Eudora Welty and Gertude Stein among his friends.
While Eileen Slocum is the protagonist of the story, BEHIND THE HEDGEROW has an intriguing supporting cast, including such prominent Newporters as Hugh D. Auchincloss III, known as Yusha, and Betty "Boop" Blake, a noted art collector who winters in Texas. Both Yusha and Boop were lifelong friends of Eileen. Both appear for the first time ever in a film.
The narrator of the film was Eileen Slocum herself. Through a newspaper series he wrote about Newport society, Miller, a longtime staff writer at The Providence Journal, became a confidante of Slocum. During their long relationship, he spent hours recording Slocum as she discussed her life, her world, and her beliefs. These tapes, donated to Newport’s historic Redwood Library and Athenaeum, were digitized and the sound quality was enhanced for the documentary.
The movie is completed with an original score composed and conducted by Ben Mesiti and Lonnie Montaquila, the same talented musicians of ON THE LAKE: Life and Love in a Distant Place, which premiered in February 2009, has been shown on PBS affiliates coast to coast, and was nominated for a New England Emmy. Talented editor Harry Cawthorn was also back to help make BEHIND THE HEDGEROW.


BEHIND THE HEDGEROW had its Providence, Rhode Island, premiere on August 10, 2010, at Veterans Memorial Auditorium, as the opening-night feature presentation of the Rhode Island International Film festival. The Newport premiere was August 14, 2010. Gala parties followed both screenings. PBS broadcast will follow the premieres.