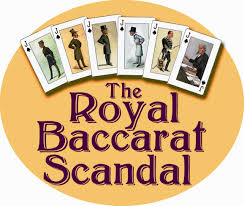 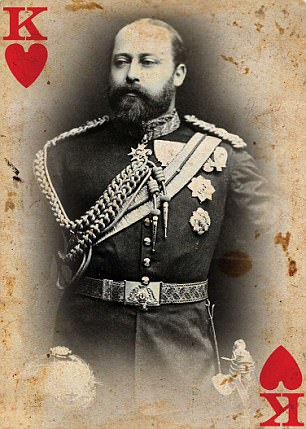 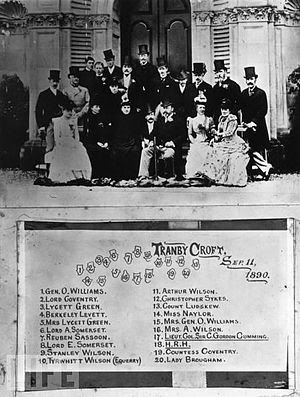 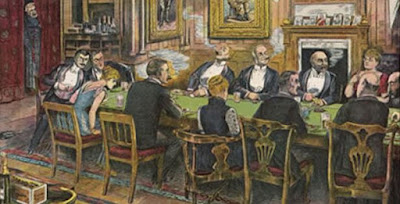 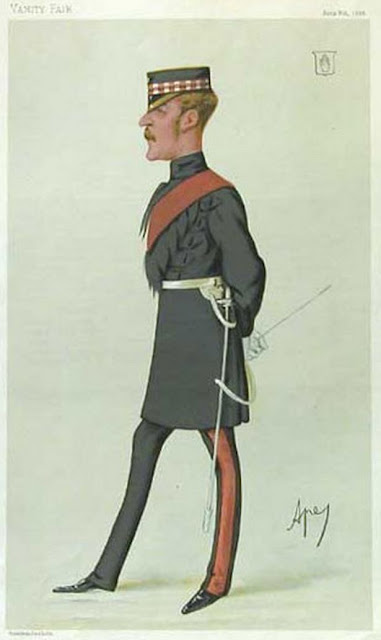 "In consideration of the promise made by the gentlemen whose names are subscribed to preserve my silence with reference to an accusation which has been made in regard to my conduct at baccarat on the nights of Monday and Tuesday the 8th and 9th at Tranby Croft, I will on my part solemnly undertake never to play cards again as long as I live."

The royal baccarat scandal, also known as the Tranby Croft affair, was a British gambling scandal of the late 19th century involving the Prince of Wales—the future King Edward VII. The scandal started during a house party in September 1890, when Sir William Gordon-Cumming, a decorated lieutenant colonel in the Scots Guards, was accused of cheating at baccarat.
In the years running up to 1890 the Prince of Wales had taken to visiting Doncaster Racecourse for the Doncaster Cup. In previous years he had stayed at Brantingham Thorpe with his friend Christopher Sykes, the Conservative Member of Parliament for Beverley. Sykes had run into financial difficulties and could not afford to host Edward, and Tranby Croft, home to Arthur Wilson and family, became the venue. After consulting with the prince, the Wilsons also invited some of Edward's inner circle, including Sykes, Gordon-Cumming and the prince's courtiers: the equerry Tyrwhitt Wilson, Lord Coventry, Lord Edward Somerset, Captain Arthur Somerset—his cousin—and Lieutenant-General Owen Williams, along with their wives. Also accompanying the party was Lieutenant Berkeley Levett, a brother officer to Gordon-Cumming in the Scots Guards and a friend of the Wilson family.

8–11 September
Among those originally invited were Lord Brooke and his wife Daisy; her step-father died two days before the party was due to leave London, and she and her husband withdrew from the trip. Daisy, the prince's mistress at the time, was known to some journalists as "babbling" Brooke because of her propensity to gossip. On 6 September Edward returned early from travelling in Europe; he visited Harriet Street where he found Daisy Brooke "in Gordon-Cumming's arms", which soured the relationship between the two men.

After dinner on 8 September, the guests at Tranby Croft listened to music from Ethel Lycett Green until about 11 pm, when the prince suggested a game of baccarat. Although the Wilsons did not have a suitably-sized table, Stanley Wilson improvised, putting two card tables alongside the smoking room table—all of which were of differing sizes—and covered them with a tapestry cloth. Among the evening's players were the prince, who acted as dealer; Sassoon, who took the part of banker; and Gordon-Cumming. Sitting next to the last-named was Stanley Wilson, who was on Levett's left.

As the game began Gordon-Cumming discussed the tapestry with Wilson, commenting that the different colours of the cloth made it difficult to see the counters; Gordon-Cumming put a piece of white paper in front of him on which to place his now highly-visible stake. Although many of the inexperienced party were playing for small stakes, Gordon-Cumming was betting between £5 and £25 for a coup; he played the coup de trois system of betting,[e] in which if he won a hand with a £5 stake, he would add his winnings to the stake, together with another £5, as the stake for the next hand. Soon after play began Stanley Wilson thought he saw Gordon-Cumming add two red £5 counters onto his stake after the hand had finished, but before the stake had been paid—a method of cheating known in casinos as la poussette; after he thought that this had happened a second time, Wilson turned to Levett and, according to the later court transcripts, whispered "My God, Berkeley, this is too hot!" further explaining that "the man next to me is cheating!" After Levett also watched for a few minutes, he agreed, saying to Wilson "this is too hot". After half an hour the game was completed and the prince congratulated Gordon-Cumming on his play; the future king also asked Mrs Wilson for a more suitable table for the following day. Stanley Wilson instructed the butler to move a longer, three-foot wide table in and cover it with green baize. Wilson then discussed the cheating with Levett. The two men were uncertain what steps to take, and agreed that Stanley would ask his brother-in-law, Lycett Green, for his advice. Although Lycett Green thought it impossible that Gordon-Cumming would have cheated, Stanley told him that he was certain, as was Levett.

The following day, 9 September, the party visited the races, where the prince's horse won the Clumber Stakes. After dinner the prince once again wanted to play baccarat and asked for a chalk line to be drawn on the baize, six inches from the edge, behind which players were to keep their counters when not placing their stake. Edward was banker and Williams acted as the croupier. When Gordon-Cumming arrived at the table, there were only two vacant seats. At either of them, Gordon-Cumming would be surrounded by members of the Wilson family, all of whom had been informed of Stanley and Levett's suspicions.

After half an hour's play Lycett Green once again became convinced that Gordon-Cumming was cheating. He left the table and sent a note to his mother-in-law—still at the table—recounting his suspicions: she took no action. By the time the game was finished Mary Wilson, the two Lycett Greens and Stanley Wilson—all of whom had been watching Gordon-Cumming closely—were convinced that he had been cheating, although they differed in their versions of what they saw. Others saw nothing, including people sitting closer to him, such as the prince, Lady Coventry (sitting next to Gordon-Cumming) and Levett (sitting opposite him). Over the two nights' play Gordon-Cumming won a total of £225.

Mary Wilson's brother died unexpectedly that night in Hull; although she and her husband did not attend for a second day's racing, they asked all the other guests not to interrupt the plans, and the remainder of the party attended, watching the St. Leger Stakes. During the journey to the racecourse, Lycett Green asked Edward Somerset his advice, telling the peer that several members of the party were convinced of Gordon-Cumming's guilt. Edward Somerset decided to consult his cousin, Arthur Somerset, and the two men suggested that Lycett Green inform the prince's senior courtier, Lord Coventry.

When the party returned to Tranby Croft that evening Lycett Green, Stanley Wilson and both Somersets met Coventry; Levett refused to attend. After Lycett Green had told Coventry what he had seen, the latter summoned Williams, who was a mutual friend of both the prince and Gordon-Cumming. Lycett Green repeated the allegation once again. Williams later recounted that he was "shocked and overwhelmed with a sense of calamity", and said that Edward must be informed immediately. There was some disagreement between the courtiers on whether to tell the prince; Coventry and Wilson both thought it the right move, but Arthur Somerset felt that the matter could and should be dealt with by those present. Later he was persuaded that informing the prince was the right course of action. Lycett Green grew more pugnacious throughout the discussions, and threatened to accuse Gordon-Cumming in public at the races the following day; he also stated that "I will not be a party to letting Gordon-Cumming prey on society in future". The men decided that Gordon-Cumming should sign a document admitting his guilt in exchange for their silence, and Williams and Coventry went to Edward to inform him of what had been happening. The two men told the prince that "the evidence they had heard was absolutely conclusive and they did not believe Sir William Gordon-Cumming had a leg to stand on".

The prince believed what he had been told by his courtiers, and also assumed that cheating had taken place; he later said that with accusations from five witnesses he believed the worst of his friend straight away. At no point had any of those concerned investigated the situation more closely, by asking others present or seeking out Gordon-Cumming's side of events, but they had believed the events as told to them by Lycett Green and Stanley Wilson. After informing the prince, the two courtiers sought out the accused man and informed him of what had been said. Coventry broke the news to him, saying that "There is a very disagreeable thing that has occurred in this house. Some of the people staying here object ... to the way you play baccarat", and that the accusation was that he had "resorted to foul play" at the game. Gordon-Cumming denied the accusation, asking "Do you believe the statements of a parcel of inexperienced boys?", and demanded to see the prince.

After dinner the guests signed the visitors book, after which the prince—accompanied by Coventry, Williams and the two Somersets—received Lycett Green and the other accusers. After hearing what they had to say, the prince dismissed all except Coventry and Williams, and called for Gordon-Cumming, who told Edward that the accusation was "foul and abominable"; the prince pointed out that "there are five accusers against you". Gordon-Cumming then withdrew while the royal party discussed what the next steps would be. He returned after half an hour to find just the two courtiers, who urged him to sign a document that they had drafted. Under pressure, and still denying the accusations, Gordon-Cumming signed the document without knowing who else would sign it afterwards.

"In consideration of the promise made by the gentlemen whose names are subscribed to preserve my silence with reference to an accusation which has been made in regard to my conduct at baccarat on the nights of Monday and Tuesday the 8th and 9th at Tranby Croft, I will on my part solemnly undertake never to play cards again as long as I live."
— (Signed) W. Gordon-Cumming

The courtiers took the document to Edward, who summoned the other members of the house; he read the note to them and signed it, pointing out to everyone that the promise of secrecy was incumbent on all of them. He also added that Gordon-Cumming was still protesting his innocence, despite signing a paper that "practically admitted his guilt". The paper was then signed by the men present: the prince, Coventry, Williams, Wilson and his son, both Somersets, Lycett Green, Levett and Sassoon. Although the prince hoped that this would bring an end to the affair, Arthur Somerset pointed out that it would not remain secret. Edward asked him "not even when gentlemen have given their word not to divulge it?"; Somerset replied that "It is impossible, sir. Nothing in the world known to ten people was ever kept secret". 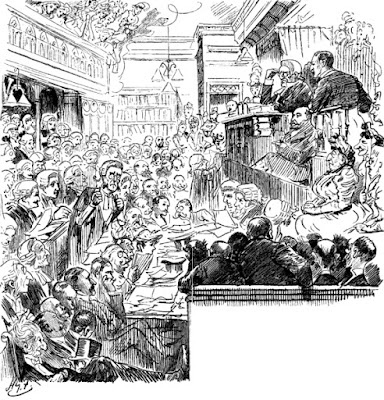 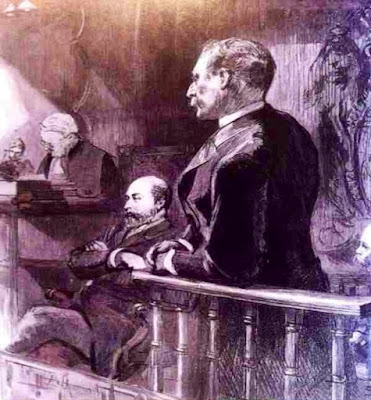 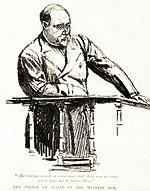 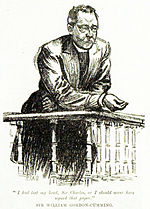 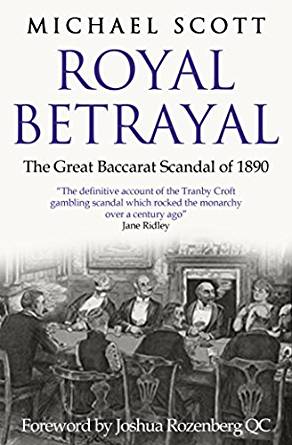 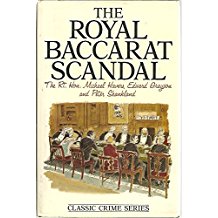