Louise Vava Lucia Henriette Le Bailly de La Falaise was born on 4 May 1948 in England, the eldest child and only daughter of Alain, Count de La Falaise (1903–1977), a French writer, translator and publisher, and his second wife, the former Maxime Birley (1922–2009), an Anglo-Irish fashion model, whom photographer Cecil Beaton once told, "You are the only English woman I know who manages to be really chic in really hideous clothes".

Three of her christening names honoured relations: Louise (her father's elder sister, who died as a teenager); Vava (one of the names of her maternal grandmother, Lady Birley); and Henriette (the name of her paternal grandmother, Henriette Hennessy, Comtesse Alain Hocquart de Turtot). La Falaise was allegedly baptised not with holy water but with Shocking, the scent by fashion designer Elsa Schiaparelli, her mother's employer.

After her parents' divorce in 1950, following her mother's infidelities and a French court's declaration of her as an unfit mother, Loulou and her brother went to live with foster families until she was seven. After that, La Falaise was enrolled in English boarding schools, and "her school holidays were shared between mother, father, and the second foster family". She attended a boarding school in Switzerland as well as the Lycée Français de New York, though was expelled from each due to her rebellious nature.

Loulou de La Falaise had one sibling, Alexis Richard Dion Oswald Le Bailly de La Falaise,(1948-2004), a furniture designer, who appeared in the Andy Warhol film Tub Girls. After the death of her uncle in 1972, her father became the Marquis de La Coudraye, as he died without issue. After her father's death in 1977, her brother assumed the title, Marquis de La Coudraye (until his death in 2004).

The family's actual surname is Le Bailly, though members have used Le Bailly de La Falaise, referring to an ancestral estate, since the mid 19th century; it is typically abbreviated to de La Falaise.

La Falaise moved to New York City in the late 1960s, where she briefly modelled for American Vogue before turning to designing printed fabrics for Halston. Late in the decade she worked as a junior editor at the British society magazine Queen, during which time she met Saint Laurent.Eventually, she moved to Paris, where she joined his haute-couture firm in 1972. Responding to a description of her as a Saint Laurent muse in 2010, La Falaise responded, “For me, a muse is someone who looks glamorous but is quite passive, whereas I was very hard-working. I worked from 9am to sometimes 9pm, or even 2am. I certainly wasn't passive.”

"Her official task was to bring her eccentric style to accessories and jewellery, and she duly came up with often-chunky designs incorporating large colourful stones, enamel work or rock crystal". La Falaise also inspired Saint Laurent with her inventive wardrobe: "one week she was Desdemona in purple velvet flares and a crown of flowers, the next Marlene [Dietrich] with plucked crescent-shaped eyebrows". In 2002, when Saint Laurent retired, La Falaise began producing her own clothing and jewellery designs. As reported in The New York Times by fashion writer Cathy Horyn, "The clothing line captured much of her rare taste—well-cut blazers in the best English tweeds, French sailor pants in linen, striped silk blouses with cheeky black lace edging, masculine walking coats with fur linings, and gorgeous knits in perfectly chosen colors".

She also designed cloisonné boxes and porcelain vases for Asiatides, as well as jewellery for the boutique of the Majorelle Gardens in Marrakech, Morocco.

After more than three decades designing jewellery and accessories for Saint Laurent, La Falaise launched her own fashion business, designing ready-to-wear, costume jewellery, and accessories, which were retailed in the U.S. as well as two Loulou de La Falaise shops in Paris.

She sold simplified versions of her jewellery designs in a line created for the Home Shopping Network and created costume jewellery for Oscar de la Renta. She operated two of her own shops in Paris, one of which was designed by her brother, Alexis.

On 6 October 1966, she married Desmond FitzGerald, 29th Knight of Glin (1937-2011), an Irish nobleman. They separated the following year and divorced in 1970. Her title upon marrying the knight was Madam FitzGerald.
On 11 June 1977, she married Thadée Klossowski de Rola, a French writer, who is the younger son of the painter Balthus in Paris, France. She wore a harem-and-turban ensemble from Yves Saint Laurent Rive Gauche. They had one child:
Anna Klossowski de Rola, co-founder of the contemporary art collection called "MGM."


La Falaise died at Gisors' hospital, France, on 5 November 2011.The cause of death was not specified, other than as the result of a "long illness".An obituary published in Women's Wear Daily stated, "According to sources, de la Falaise was diagnosed with lung cancer last June, but implored intimates to keep her health a private matter". 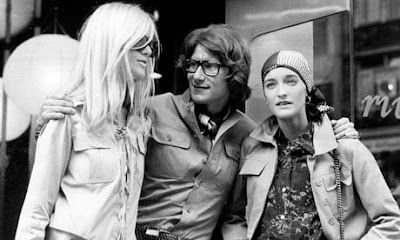 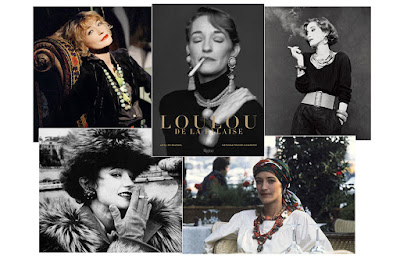 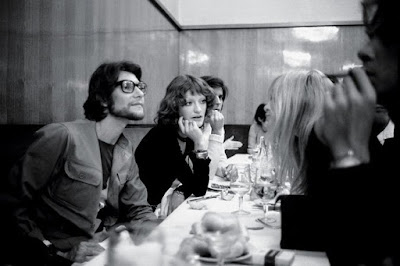 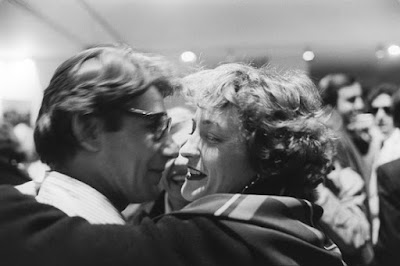 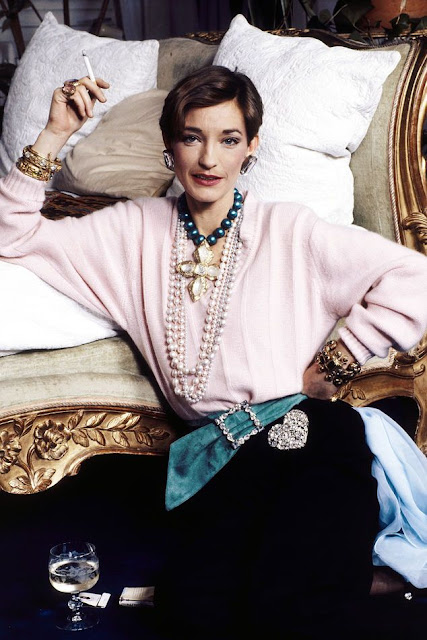 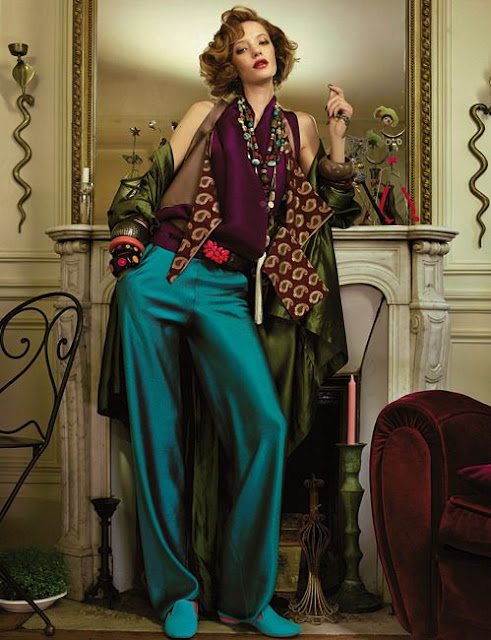 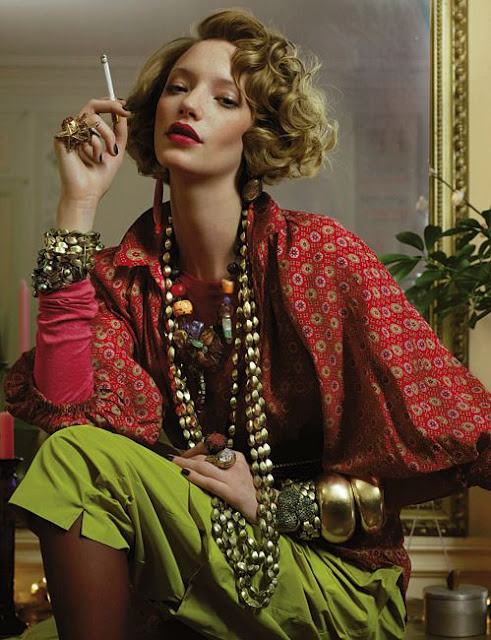 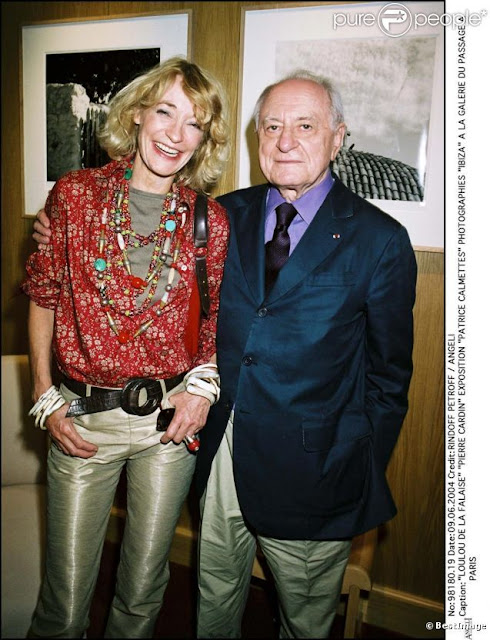 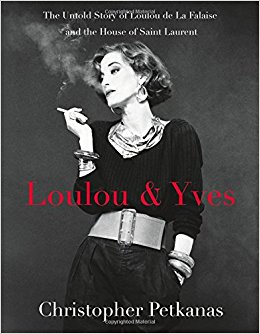 Loulou & Yves: The Untold Story of Loulou de La Falaise and the House of Saint Laurent
By Christopher Petkanas

No one interested in fashion, style, or the high-flying intrigues of café society will want to miss the exuberantly entertaining oral biography Loulou & Yves: The Untold Story of Loulou de La Falaise and the House of Saint Laurent, by Christopher Petkanas.

Dauntless,“in the bone” style made Loulou de La Falaise one of the great fashion firebrands of the twentieth century. Descending in a direct line from Coco Chanel and Elsa Schiaparelli, she was celebrated at her death in 2011, aged just sixty-four, as the “highest of haute bohemia,” a feckless adventuress in the art of living―and the one person Yves Saint Laurent could not live without.

Yves Saint Laurent (1936-2008) was the most influential designer of his times; possibly also the most neurasthenic. In an exquisitely intimate, sometimes painful personal and professional relationship, Loulou de La Falaise was his creative right hand, muse, alter ego and the virtuoso behind all the devastatingly flamboyant accessories that were a crucial component of the YSL “look.” For thirty years, until his retirement in 2002, Yves relied on Loulou to inspire him with the tilt of her hat, make him laugh and talk him off the ledge―the enchanted formula that brought him from one historic collection to the next.

“Her presence at my side is a dream,” Yves declares in Loulou & Yves. “I trust her reactions. Sometimes they are violent but always positive... I bounce ideas off her and they come back clearer and things begin to happen.”

Yves’s many tributes shape Loulou’s memory, as if everything there was to know about this fugitive, Giacometti-like figure could be told by her clanking bronze cuffs, towering fur toques, the turquoise boulders on her fingers and her working friendship with the man who put women in pants. But parallel to this storyline runs another, darker one, lifting the veil on Loulou, a classic “number two” with a contempt for convention, and exposing the underbelly of fashion at its highest level. Behind Yves’s encomiums are a pair of aristocrat parents―Loulou’s shiftless French father and menacingly chic English mother―who abandoned her to a childhood of foster care and sexual abuse straight out of “Les Misérables”; Loulou’s recurring desperation to leave Yves and go out on her own; and the grandiose myths surrounding her family. Loulou felt that her life had been kidnapped by the operatic workings of the House of Saint Laurent, and in her last years danced with financial ruin. Delving beyond the “official” version of her life, Loulou & Yves unspools an elusive fashion idol―nymphomaniacal, heedless and up to her bracelets in coke and Boizel champagne―at the core of what used to be called “le beau monde.”

On the theory that everyone loves a cocktail party, Loulou & Yves traces her life chronologically through the charming literary device of oral biography, in which the spoken memories of more than two hundred “voices”―husbands, lovers, extended family, friends, enemies, slightly less bitter detractors, colleagues, groupies, pundits, and hangers-on―are seamlessly interwoven with those of Yves and Loulou themselves. Readers mingle at the party as invited guests, listening in on Andy Warhol and Karl Lagerfeld and collecting clues from Mick Jagger and Tom Ford as the narrative unfolds. Topping the A-list of figures who tell Loulou’s story in their own words, uncensored, are Cecil Beaton, Diana Vreeland, Thadée Klossowski, Robert Mapplethorpe, Helmut Newton, Hubert de Givenchy, Manolo Blahnik, Diane von Furstenberg, Elsa Peretti, Betty Catroux, John Richardson, Alber Elbaz, Christian Louboutin, Grace Coddington, Ben Brantley, Bruce Chatwin, Lady Annabel Goldsmith, André Leon Talley, and Pierre Bergé. In a fluent round of sparkling conversation, author Christopher Petkanas brings them all together for a party that swirls around one of the most scintillating women the fashion world has ever known.

“She’s the sounding board,” Yves rhapsodizes of his second self in Loulou & Yves, a sweeping, waspish work of fashion and social history. “She’s never wrong.”
https://www.amazon.com/Loulou-Yves-Untold-Falaise-Laurent/dp/125005169X 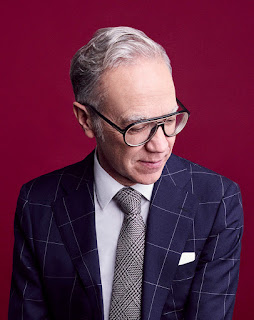 
While living in Paris, Christopher Petkanas covered Loulou de La Falaise and the House of Saint Laurent from 1982 to 1988, picking up with Loulou again more than two decades later, in 2010, the year before she died. He has written for The New York Times, Vogue, and Architectural Digest, and his previous books are At Home in France: Eating and Entertaining with the French, and Parish-Hadley: Sixty Years of American Design (with Sister Parish and Albert Hadley). He now resides in New York