The sale of the century: A look inside the Rockefeller auction 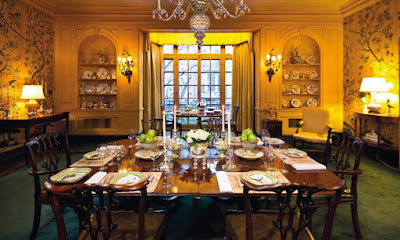 'An exceptional sale': dazzling Rockefeller collection could fetch $1bn
Sprawling private collection of 1,600 of David Rockefeller’s items will go on auction at Christie’s – and could break records

In a bid to keep the sale as accessible as possible, hundreds of items, including costume jewellery and furniture, are being placed in an online auction where bidding starts as low as $100.

There was a hushed sense of awe among the spectators perusing the nearly 1,600 items prepared for auction at Christie’s in Manhattan. Elderly New York society doyennes walked through the collection with private guides, stopping for a second to admire the Monets and Picassos, as tour groups crowded by the ornate porcelains and decorative arts, spanning centuries and continents, craning their heads to catch a glimpse.

Spread across three floors of Christie’s salerooms is the sprawling private collection of David Rockefeller, the billionaire banker and globetrotting philanthropist who died last year at 101. The last surviving grandchild of the oil magnate and America’s first billionaire John D Rockefeller, David Rockefeller spent much of his life collecting exceptional works of modern art, which will now be sold to raise money for the family’s preferred charitable causes.

Branded as a once-in-a-generation chance for global collectors to buy some of the world’s most significant pieces still in private collection, some predict the auction, which will take place over three days next week, could be the first to raise $1bn in total.

“This is not just a New York event,” said Jonathan Rendell, Christie’s deputy chairman. “It’s a world event. It is an exceptional sale.”

Among the collection’s highlights include Picasso’s Fillette à la corbeille fleurie (Young Girl with a Basket of Flowers), one of the finest portraits of his rose period. The painting had hung in the living room of Rockefeller’s grand Manhattan home on the Upper East Side for decades. He bought it from the estate of Gertrude Stein in 1968, meaning the painting has only had two owners. It was described in Ernest Hemingway’s A Moveable Feast, the memoir of the author’s time in 1920s Paris, as hanging in Stein’s Left Bank apartment.

The piece is expected to sell for over $100m.

Also on sale is Monet’s Nymphéas en fleur (Water Lilies in Bloom), an important work in the artist’s series of water garden paintings. The work is distinguished by the fact that all the lilies are in full bloom, and was brought to New York after Rockefeller, with his wife Peggy, who died in 1996, purchased it from a dealer in Paris in 1956. The painting had hung at the couple’s Hudson Pines estate in Sleepy Hollow, near the bottom of grand, winding staircase, and is estimated to sell for between $50m and $70m.

The collection also includes a number of works from American artists including Edward Hopper, Georgia O’Keeffe and Willem de Kooning – most of them valued at over seven figures. Diego Rivera’s masterwork The Rivals, painted in 1931 in a makeshift studio aboard the steamship that brought him and Frida Kahlo to New York, will also be on sale – valued at up to $7m.

“Encountering the quality of these paintings has been a fantastic journey for all of us,” Rendell said.

But even among these eye-watering estimates there is a sense that Christie’s has veered on the conservative side. Following the $450m sale of a painting by Leonardo Da Vinci at the end of last year, a price that shattered auction records, some predict the auction’s banner items will go for much higher than the estimated price.

Rendell would not be drawn on the issue. “I will wait until next week and then I’ll say if it was a conservative estimate. This week, the estimate is what the estimate is,” he said.

While the greatest monetary value lies in Rockefeller’s modern art, the collection extends to an array of extraordinary artefacts, from a dinner service Napoleon took with him into exile on the island of Elba in 1814, to a 13th-century Syrian incense burner unique in that it has Christian and Islamic decoration. The burner had sat on Rockefeller’s desk until his death.

The Rockefellers purchased many of the pieces over their decades of collecting for relatively small prices, only to see the valuation balloon in recent years as the market surged.

Nonetheless, in a bid to keep the sale as accessible as possible, hundreds of items, including costume jewellery and furniture, are being placed in an online auction where bidding starts as low as $100.

To many in the art world, next week’s auction marks the end of an era. Rockefeller, who had long pledged to sell his entire collection and donate the proceeds to a group of chosen charities, was the last in a line of tycoon collectors whose primary mission was to patronise the arts through their purchases.

“It was the stagecraft of his life,” said Evan Beard, national art services executive at US Trust, Bank of America’s private wealth management division. “But the folks who will be buying a lot of this material will be a new breed of collector, where they have at least one eye on the financial component. Art for them is an extension of their financial life.”

Beard said he represented a number of buyers planning to bid on some of the most lucrative items in the catalogue. A group of which were hedge fund managers, “trophy hunting clients”, aiming to put together some of the great private collections in the world.

“Many of these folks think of themselves as the next generation. So you’ll see some bidding just because of the cultural capital that is contained within these works,” he said.

Thank you! It is a shame that David Rockefeller, who really did collect exceptional works of modern art, is selling off the treasures separately, even if the money will go to worthwhile charities. I would prefer they be kept together in one house/gallery, so that future generations can see the collection together.

Even better for my argument, Rockefeller bought the collection (intact?) from the estate of Gertrude Stein in 1968.