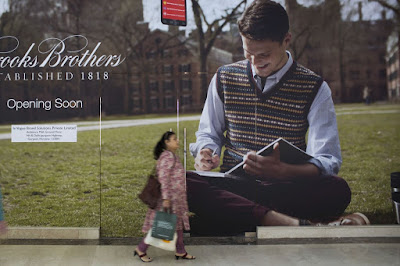 Two-century year old retailer extending sale process
Many of its U.S. stores were struggling before Covid-19

Brooks Brothers Inc., the two-century-old menswear company that set the standard for aspiring Wall Street bankers, is seeking to sell itself.

The retailer has extended a sale process begun last year, according to people familiar with the matter who asked not to be identified because it wasn’t public. Depending on how many stores a buyer wanted, a transaction could ultimately be part of a bankruptcy filing, they said. The company has about $600 million in debt.

“In the ordinary course of business, Brooks Brothers consistently explores various strategic options to position the company for growth and success,” a company representative said in an email. The company has “nothing to announce at this time.”

Even as some states start to ease lockdowns aimed at containing the coronavirus pandemic, it remains to be seen how quickly consumers will return to stores and how much they’ll spend. While even the affluent Brooks Bros. clientele has little need for new suits at the moment, the brand’s history and cache has elicited interest, the people said.

1818 Opening
Many of the company’s approximately 250 U.S. locations have struggled, some of the people said. It operates a similar number of stores in more than 40 other countries, according to its website.

On the one hand, Brooks Brothers customers are less affected by the millions of job losses that have roiled the country, because many can do their jobs remotely. But it will be months or even years before workplaces can fully reopen, and no one knows what routines and habits, including what people wear to work, will look like post-pandemic.

Henry Sands Brooks opened the first store in 1818 on the corner of Cherry and Catherine streets in lower Manhattan. The company, which calls itself the oldest U.S. clothing retailer, has dressed U.S. presidents including John F. Kennedy and now sells men’s, women’s and children’s clothing.

Its suits became the uniform of the Wall Street macher, but as it expanded, it opened more stores in malls and on Main Streets, some of which are dragging on its performance now. British merchant Marks & Spencer bought the company in 1988, then sold it to billionaire Claudio del Vecchio in a deal completed in 2002.

— With assistance by Boris Korby 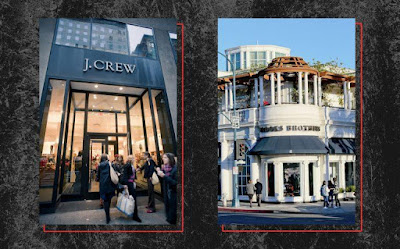 J. Crew and Brooks Brothers are among the latest retailers on the brink of bankruptcy.

J. Crew, which has 322 stores, is seeking $400 million in financing to fund operations during bankruptcy, CNBC reported. And Brooks Brothers is seeking to sell itself, a deal that could potentially be part of a bankruptcy filing, according to Bloomberg.

J. Crew, whose holdings include retailer Madewell, was struggling before the coronavirus sent shoppers home in March. The company saw “meaningful improvement” in its 2019 business, according to Moody’s, compared with the prior year, but as of February it had $93 million in total liquidity as debts came due. TPG Capital and Leonard Green & Partners bought the company in 2011 for $3 billion.

Similarly, Brooks Brothers’ woes predate the health crisis. The Wall Street favorite has $600 million in debt and many of its 250 U.S. locations were also struggling before the pandemic, sources told Bloomberg. Its attempt at a sale began last year.

The pandemic has exacerbated retailers’ financial problems. High-end department store Neiman Marcus is also nearing bankruptcy, though a group of its investors are pushing for the firm to seek a sale. J.C. Penney, too, is in talks with its lenders for at least $800 million in bankruptcy financing.  [CNBC, Bloomberg] — Georgia Kromrei 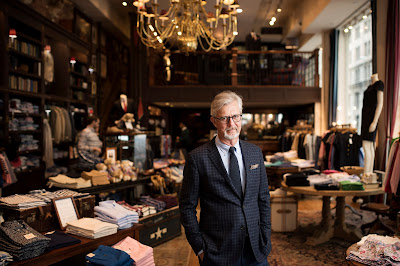 With a Glance Backward, Brooks Brothers Looks to the Future

After Claudio Del Vecchio bought Brooks Brothers in 2001, one of the first things he did was read stacks of letters from longtime customers who were unhappy with the changes made by the previous owners.
By Teri Agins
April 21, 2018
https://www.nytimes.com/2018/04/21/business/brooks-brothers-looks-to-the-future.html

In early 2002, just a few months after he officially took over as the new owner and chief executive officer of Brooks Brothers, Claudio Del Vecchio confronted the reality that the classic American retailer had largely lost its way.

Mr. Del Vecchio knew that many of the clothing fabrics were no longer of high quality, that too many of its shirts were ill fitting and that there were often disconcerting irregularities, like a rack of navy blazers that weren’t the exact same shade of navy.

And longtime customers had noticed.

Among Mr. Del Vecchio’s first acts as owner was to read a stack of angry letters from Brooks Brothers loyalists who griped about how the merchandise quality had fallen under the previous owner, the British retailer Marks & Spencer. They also balked at the limited selection of classic blazers and suits in the stores.

Those letters confirmed much of what Mr. Del Vecchio, a wealthy Italian entrepreneur, had seen for himself and stiffened his resolve to return to the company’s roots. “I saw the business opportunity to increase sales,” he said. “I knew how to fix this.”

A new executive team shifted into crisis mode. Led by an experienced chief merchant, Eraldo Poletto, with whom Mr. Del Vecchio had worked at Casual Corner (a women’s wear retail chain that Mr. Del Vecchio sold in 2005), they began to corral the company’s best suppliers to revamp all the store’s merchandise. Hundreds of garment styles required new specifications, better fabrics and apparel factories. It took about six months for the first shipments of the improved garments to arrive in stores — swapping out the oversize khakis and shapeless polo shirts.

Among the upgraded versions were luxurious three-ply Italian cashmere sweaters, replacing the two-ply Mexican cashmeres, and three styles of blazers and khakis, instead of just one. By April 2003, the store had completely overhauled its merchandise — and its loyal fans started coming back.

By 2004, Mr. Del Vecchio said, the privately held Brooks Brothers was modestly in the black, reversing a series of money-losing years that had begun in the late 1990s.

The history of Brooks Brothers and the tenure of Mr. Del Vecchio — who has been wearing Brooks Brothers for more than half of his 61 years — will be celebrated on Wednesday evening, when the company will host a black-tie gala at Jazz at Lincoln Center for 1,000 of its best customers, friends and celebrity guests to mark its 200th anniversary. The all-American jazz program, produced by the Jazz at Lincoln Center Orchestra’s artistic director, Wynton Marsalis, befits the all-American clothier, which has been the group’s corporate sponsor and official clothier since the 1990s.

Among my family, schoolmates and friends BB was practically the only source of all our clothes, From underwear, socks, shoes, shirts khakis ( "chinos") bathing suits, shorts, blazers, suits, overcoats. The only other sources were J Press, Tripler's ,and later Paul Stuart, but prices were higher and usually these were the purveyors to the adults. The seasonal, perhaps twice-yearly safari to BB to "get what you need" was a major event. Secondary source was ( and remains) LL Bean for " sports clothes".
Ralph Lauren was the usurper. As BB quality declined and they removed the "classics" RL filled the gap. Initially rejected by Preppydom as an interloper, the quality and availability caused a capitulation- despite his logo or name being ubiquitous. Sometime in the 90s they attempted to imitate the "Gap" ( known among the posh preppies as Gap-Crap) offering pre-washed shirts, jeans and khakis and eliminating - among many other classics- the "broad- striped" buttoned- down collar that was a preppy uniform. In disgust, customers purchased the RL copies, then realising they were as good and as long-wearing. The damage was done. BB's products then bore "made in China" tags. Game over. Does BB want to survive? Call Ralph and ask for help.