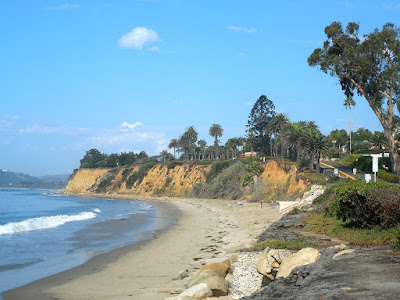 Duke and Duchess of Sussex should feel right at home in this part of California, where the rich and famous can live a quiet life

There are moments, as you make the 90-minute drive up the coast from Los Angeles to Montecito, where Prince Harry and Meghan have set up their new home, when you can almost imagine you are heading into an unspoilt wilderness.

The mini-malls, car dealerships and fast-food joints give way, first, to jagged mountainscapes and plunging canyons. Then, after another stretch of asphalt and commercial activity where the mountains meet the Pacific, comes a deliriously unspoiled stretch of coastline, with pristine beaches to the left and the foothills of the Los Padres national forest to the right.

Then comes Montecito. It is indubitably a retreat, not a town in any recognisable sense but a cluster of narrow lanes that wind up from the coast through lush stands of eucalyptus and juniper towards a popular hot spring in the hills. It has a petrol station but no chain stores – only a couple of small commercial strips known as the Upper and Lower Village.

What it does have is an extraordinary concentration of wealth and celebrity. This is home to Oprah Winfrey (she calls her sprawling estate “The Promised Land”), Ellen DeGeneres, Ariana Grande, Gwyneth Paltrow and a broad sprinkling of the US’s super-rich whose multimillion-dollar estates stud the hillsides and, occasionally, raise local eyebrows because of their sheer, unabashed extravagance.

In 1966, the crime writer Ross Macdonald observed that among Montecito’s “mock-rustic shops” residents “play at being simple villagers the way the courtiers of Versailles pretended to be peasants”. In short, it is a place where an errant blueblood can feel right at home – while at the same time being assured of the peace it appears he craves.

It came as no surprise to Montecitans, or to residents of its big-sister city next door, Santa Barbara, to learn this week that the Duke and Duchess of Sussex have been in their midst unnoticed for more than a month. In those hills, you could be holed up in a $15m (£11.5m) mansion – as theirs is believed to be – for years on end and nobody but your servants would ever know.

The spread that local real-estate experts say the couple has bought includes nine bedrooms, 12 bathrooms, a guest house, a teahouse, a tennis court, a swimming pool and a custom-made climbing frame for the children. Known as “Chateau at Riven Rock”, it is accessible only along a gated private driveway whose sign warns passersby to stay well away unless they have permission to pass.

This stretch of the southern California coast attracts no lack of superlatives. In 1928, Charlie Chaplin called Montecito the “cream of the coast” and gathered a group of investors to establish the Montecito Inn, the anchor around which the rest of the community sprang up. TC Boyle, who probably qualifies as being on the shabbier end of Montecito’s 9,000 residents despite being a celebrated, bestselling author, wrote recently how he valued the proximity to nature and the “semi-rural ambience”.

“We have no sidewalks here,” he said. “If we want sidewalks, we can take the five-minute drive into Santa Barbara … But we don’t want sidewalks. We want nature, we want dirt, trees, flowers.”

There is, of course, a darker side – the noir behind the sunshine. All those wealthy homeowners cling jealously to what they have and are unafraid to use their money and their power to stare down anyone – local elected officials or local newspaper columnists, usually – who dares to suggest they should make room for more affordable housing, or are consuming more than their fair share of California’s desperately short water supply.

Fifteen years ago, the actor Rob Lowe raised eyebrows when he not only strong-armed the community into agreeing to a vast expansion of his hillside palace but threatened his neighbours with restraining orders when they trimmed back ficus trees on his property line because they interfered with the ocean view. Lowe also went to war against the local paper when, in covering the controversy, it made the relatively uncontroversial decision to publish his address. The publisher took Lowe’s side, and the editorial team melted down shortly after.

At the time, Lowe was part of something called the Homeowners Defense Fund, whose mission – essentially, to keep out poorer people – was boosted by a $1,000-per-person cocktail party hosted by Carol Burnett, Bo Derek and Tab Hunter, among others. (Lowe eventually left the group and sold his property in 2017.)

With clout like that, the community has easily resisted calls to merge with Santa Barbara and remains ruggedly independent. To silence the critics about its water consumption, Montecito cut a deal last month to pay for half of a $72m desalination plant in Santa Barbara; in exchange, Santa Barbara agreed to sell Montecito all the water it wants for the next 50 years.

All the money in the world, though, cannot alter the fact that foothill communities in California are at the mercy of occasionally terrifying natural forces. In the winter of 2017-18, wildfires scorched and denuded the Santa Ynez mountains above the town and primed the slopes for devastating mudslides once the rains came. Mud and sludge came racing down the canyons in the dead of night, destroying houses, starting a gas fire, and killing more than 20 people.

As Macdonald observed in his Montecito-set novel, Black Money: “Almost anything can happen here. Almost everything has.” 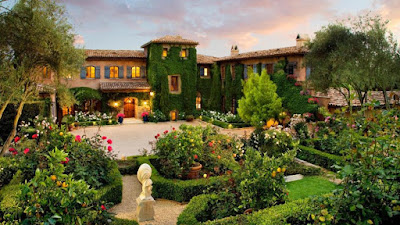 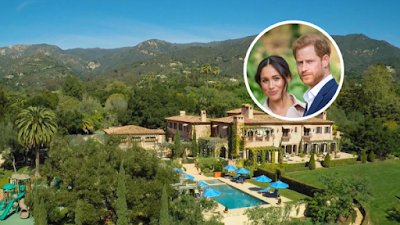 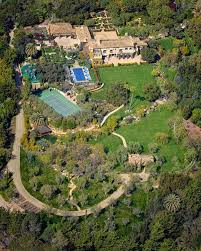 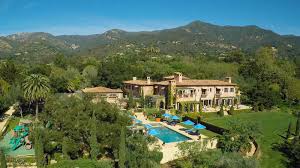 Meghan Markle and Prince Harry have gone exceptionally grand with their California starter house, purchasing a $14.65 million estate in the heart of posh Montecito, the seaside Santa Barbara County enclave that is famously home to a slew of Hollywood heavyweights.

The Duke and Duchess of Sussex’ names do not appear on grant deeds related to the property — records show the estate quietly sold in mid-June to a mysterious trust with a deliberately opaque name, though the trust happens to share a mailing address with the offices of Meghan Markle’s longtime Hollywood business manager.

Public documents also reveal the buyers secured a $9.5 million mortgage to acquire the 7.4-acre compound, which is securely tucked away on a private, gated street. Despite the unquestionably hefty pricetag, it could be argued Meghan and Harry scored the property at a discount of sorts — the seller, low-profile Russian businessman Sergey Grishin, acquired the estate in 2009 for $25.3 million and had attempted to sell it many times over the past decade before finally accepting a $10 million-plus financial loss.

Built in 2003, the Mediterranean-style main house includes a trove of beige and off-white decor, plus a library, gym, separate wet and dry saunas, an elevator, arcade, game room and home theater. There’s also a detached guesthouse with two bedrooms and bathrooms; altogether, the estate boasts nearly 19,000 square feet of living space with a total of 9 bedrooms and a whopping 16 bathrooms.

Meghan and Harry, who first moved stateside in early 2020, previously resided in a fortified compound owned by Tyler Perry, whom they met through mutual friend Oprah Winfrey.

Montecito may be located a full two hours northwest of downtown L.A. by car, but celebrities have flocked to the area in recent years — the neighborhood’s laid-back and mostly paparazzi-free atmosphere provides a welcome retreat from the hectic hustle of Hollywood and its surrounding environs. Current area residents include Gwyneth Paltrow, Ellen DeGeneres, Ariana Grande, and — perhaps most famously — Oprah Winfrey herself, whose nearly 70-acre “Promised Land” compound qualifies as one of Southern California’s most lavish estates.

Montecito (Spanish for "little mount") is an unincorporated community and census-designated place in Santa Barbara County, California, located east of the City of Santa Barbara. The population was 8,965 at the 2010 census.

Montecito occupies the eastern portion of the coastal plain south of the Santa Ynez Mountains. Parts of the community are built on the lower foothills of the range. Montecito, however, does not include areas such as Coast Village Road, which are usually considered part of Montecito but are actually within the city limits of Santa Barbara. Notable roads spanning Montecito include East Valley Road, Mountain Drive, and Sycamore Canyon Road, all of which form part of State Route 192. In addition, the U.S. 101 Freeway runs along the south end of town, connecting it with other cities in Santa Barbara County and the rest of Southern California.

The site of present-day Montecito, along with the entire south coast of Santa Barbara County, was inhabited for over 10,000 years by the Chumash Indians. The Spanish arrived in the 18th century but left the region largely unsettled while they built the Presidio and Mission Santa Barbara farther west.

In the middle of the 19th century, the area was known as a haven for bandits and highway robbers, who hid in the oak groves and canyons, preying on traffic on the coastal route between the towns that developed around the missions. By the end of the 1860s, the bandit gangs were gone, and Italian settlers arrived. Finding an area reminiscent of Italy, they built farms and gardens similar to those they had left behind. Around the end of the 19th century, wealthy tourists from the eastern and midwestern United States began to buy land in the area. It was near enough to Santa Barbara for essential services while still being secluded. Desirable weather and several nearby hot springs offered the promise of comfortable, healthy living, in addition to the availability of affordable land.

The Montecito Hot Springs Hotel was built near the largest of the springs, in a canyon north of the town center and directly south of Montecito Peak, in Hot Springs Canyon. The hotel burned down in 1920; it was replaced a few years later by the smaller Hot Springs Club.

The architect George Washington Smith is noted particularly for his residences around Montecito, and for popularizing the Spanish Colonial Revival style in early 20th century America, as is Lutah Maria Riggs, who started as a draftsman in Smith's firm, rose to partner, and later started her own firm.

Montecito was evacuated five times in four months between December 2017 and March 2018 because of weather-related events, which included the Thomas Fire, the 2018 Southern California mudflows, and flooding related to the Pineapple Express.The mudflows resulted in 20 reported deaths; 28 others were injured, and at least four people were reported missing.