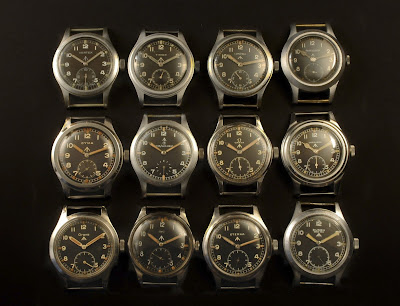 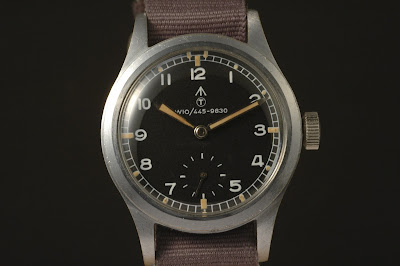 In-Depth Your Guide to the “Dirty Dozen” – Including the Only British Member, VERTEX

Simple timekeepers that have played a critical role in the successful execution of British military operations.

In our modern age of smartphones and wearable tech, it’s easy to forget just how indispensable the humble mechanical wristwatch once was. Yet even a brief foray into the world of military watches is enough to provide a vivid reminder. Rugged, reliable and entirely fit-for-purpose, these simple timekeepers have played a critical role in the successful execution of military operations that dramatically shaped the course of modern history. Particularly during World War II, the period which we will be focusing on for the purpose of this article. Arguably the best-known such watches from this era are those of the British Military. More specifically, the Dirty Dozen.

Chances are you’re already familiar with the Dirty Dozen, or have at least heard the name. That’s probably because the “Dozen” is amongst the most sought-after series by military watch collectors. If you’re not familiar with the name though, allow me to provide a brief introduction. The use of wrist-worn watches in military conflict really began in World War I. Pocket watches – the popular choice of men of the day – proved too cumbersome and time-consuming to use in the trenches. Not to mention the distraction of fumbling around with the dust cover, etc. could inadvertently expose your position to enemy snipers.

The initial – albeit rudimental – solution soldiers came up with was to strap their pocket watches to their wrists for easier access. This soon evolved into the “trench watch”, which basically used a small pocket watch case with wire lugs soldered on either end so a strap could be attached. The designs were not standardised, and the soldiers typically had to purchase these watches themselves. Meaning they were not issued by the government.

The design of these watches continued to evolve throughout the war based on the feedback from the constant “field testing” they were subjected to. For example, white dials with black numerals were soon inverted as it became clear that white text against a black background was more legible. Likewise, luminous paint – containing radioactive radium – was introduced to enable reading in low-light conditions.

The “field” military watch evolved drastically with WWII – as an example, this Vertex “Dirty Dozen”

By World War II, the wristwatch was well and truly established as an essential part of a gentleman’s daily attire. Assuming he could afford one, of course. Pocket watches still persisted – even within the military – but their popularity continued to wane. As you might expect, the wristwatch played an even more significant role in the Second World War than it did in the First. Yet there wasn’t a great deal of standardisation in the design of these watches until the early 1940s.

According to the history books, in 1943 Commander Alan Brooks (later to become Field Marshal) recognised the value of having a general-use timepiece for the armed forces. Until then almost all service watches were personal civilian items. Given that this “general-use” timepiece was destined for a very active war zone, the MoD set specific criteria for how it should look and function. These included: 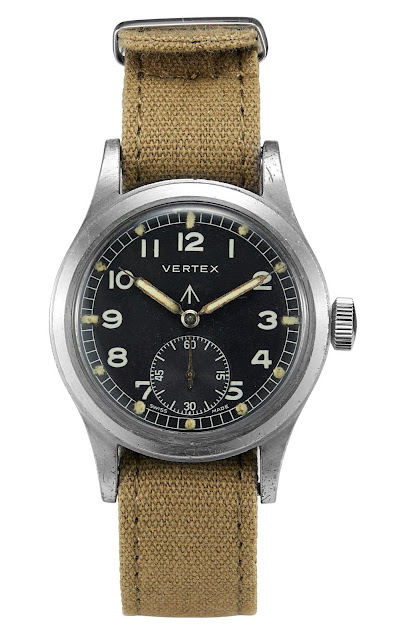 The military code for these watches was W.W.W. (Watch, Wristlet, Waterproof). They were also required to be engraved in three places with the Broad Arrow or Pheon (which denotes property of the British Crown.) On their casebacks was the descriptive code W.W.W. Two serial numbers could be found as well, one being the civil serial number of the manufacturer and the second a military one which started with a capital letter.

As part of its brief, the British MoD clearly stipulated that these watches were explicitly meant for ‘General Service.’ This did not mean that each soldier would be eligible for one; it was and certainly remains over-the-top to provide a watch regulated to chronometer standards for every soldier. With the term ‘General Service,’ the British meant that these watches would be issued to special units and tasks respectively such as artillery members, staff members, engineers and personnel of the Communications Corps.

At the time, British watch factories already had their hands full with the manufacturing of munitions and weapons. So, requisition officers were sent to Switzerland to find companies that could fulfil the order. In the end, twelve companies would be selected: Buren, Cyma, Eterna, Grana, Jaeger-LeCoultre, Lemania, Longines, IWC, Omega, Record, Timor, and Vertex. (Although Vertex was technically a British watch company, it had Swiss Manufacturing plants.)

About 145,000 W.W.W’s were delivered to the British military by all 12 manufacturers. The table below from Konrad Knirim’s book British Military Timepieces provides an overview of how many watches were contributed by each maker:

As you can see, some – such as Grana and Eterna – produced relatively low volumes. This makes it particularly challenging for collectors trying to find nice examples of each to complete their “Dozen”. A task that is made infinitely more difficult by the fact that these watches were serviced, let’s say without the greatest of care, by the R.E.M.E (Royal Electrical & Mechanical Engineers) who often chopped and changed parts between the various models. On the other hand, spending a lifetime searching and collating a complete set must be a very rewarding experience indeed.