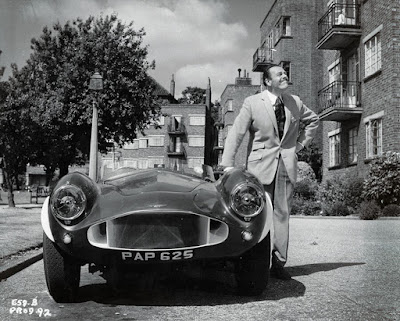 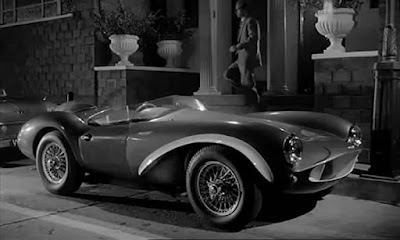 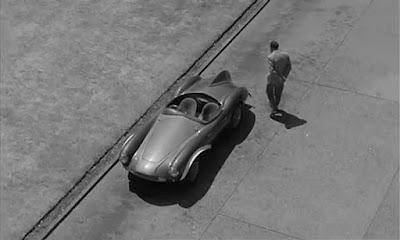 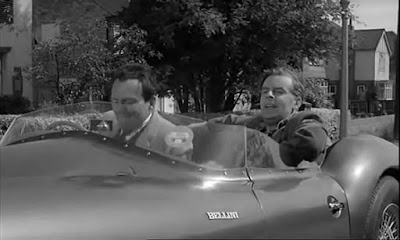 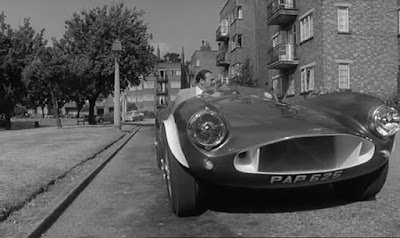 Quote - "An Aston Martin DB3S team car gunned by Moss, Collins, Brooks and Salvadori, subsequently driven into the Solent by a suicidal love-sick mechanic and later co-starring with Terry-Thomas in the legendary film School for Scoundrels? DB3S/5 started as a road car for David Brown with an experimental glassfibre body. After a disastrous '54 Le Mans it was given the aluminium body of 3S/2 for an active racing life as a factory team car. After success with Roy Salvadori, it went to privateer Dennis Barthel in 1957. He had the car prepared by Rob Walker's Pippbrook Garage where it was fettled by Alan Overton. Unfortunately the caddish DB3S owner took up with the young mechanic's fiance and tragedy followed. Barthel let Overton drive the Aston at the Gosport Speed Trials and although the mechanic set fastest time in his class he didn't live to collect his trophy on that April bank holiday. Overton never lifted off the throttle beyond the finishing post and ended his life by driving straight into the sea. The car was rebuilt with a new body; re-registered PAP 625, it was christened the Bellini to co-star with Terry-Thomas and Ian Carmichael in School for Scoundrels. The car, with its distinctive front end, was styled by Carrozzeria Touring and passed through the hands of several enthusiasts until the late Bill Lake had it meticulously restored to its original factory team car style and tracked down its old works registration 9046 H. The present owner, Erich Traber, is a regular Mille Miglia entrant following in the tracks of Peter Collins." 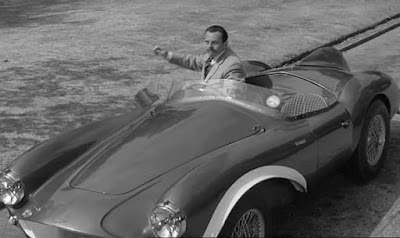 A rare Aston Martin Works team car – chassis number DB3S/5 – which was campaigned in period by such legendary racing drivers as Sir Stirling Moss, Peter Collins and Roy Salvadori, and latterly went on to co-star with Terry-Thomas in 1960s movie classic School for Scoundrels, will be offered at Bonhams Aston Martin Works Sale on 21 May 2016. It is estimated at £6,000,000-7,000,000.

Aston Martin also built a number of DB3S models for the Works racing team. Following a severe set-back during the 1954 Le Mans 24-hour race, when three of the cars were destroyed in a series of crashes, the Aston Martin Competitions Department commandeered David Brown's personal DB3S - chassis 5 now offered here - to replace one of the wrecked vehicles, changing its use from high-performance road car, to frontline Works Team race car.

The DB3S originally featured experimental glass fibre bodywork, which was the height of cutting-edge technology for the period. However, after Brown handed it over to the Works team, it was given an aluminium body-shell and upgraded to full Works specification. It never returned to David Brown's personal ownership, and instead went on to be raced by some of the most daring drivers of the time, in some of the motor sporting world's most prestigious races.

"Few cars that have appeared in film can also boast an association with so many great names from the heyday of the British racing sports car, but this Aston Martin DB3S does just that," said Tim Schofield, Bonhams UK Head Motoring. "Drivers who raced it include such legends as Peter Collins, Roy Salvadori, and Sir Stirling Moss, competing at world-class level in such gruelling races as the Mille Miglia, the Spa Grand Prix and the Nürburgring 1,000kms."

The Aston Martin DB3S later starred in the 1960s British comedy, School for Scoundrels, in which Ian Carmichael battled with caddish (but much loved) Terry-Thomas for the affections of Janette Scott. The movie is a classic tale of one-upmanship, and its plot features several notable vehicles, such as the 'Swiftmobile', which was in reality a 1928 Bentley 4½-Litre Open Tourer in disguise, an ex-Works Austin-Healey 100-Six, and - of course - the car driven by Terry-Thomas, named the 'Bellini', which was none other than this magnificent Aston Martin DB3S. 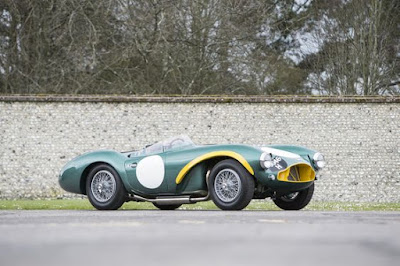 Following the disappointingly uncompetitive DB3 of 1951, Aston Martin developed the DB3S. Only 31 examples of the DB3S were ever manufactured: 11 race cars and 20 customer cars. The DB3S we’ll be talking about today is a race-ready example, an Aston Martin Works machine bearing chassis #DB3S/5.

This blast from the past is set to go under the hammer at the Aston Martin Works Sale on May 21, and Bonhams expects to sell it for anything between £6 to £7 million. That will be $8.65 to $10.1 million converted at current exchange rates, a lot of money for a gray-haired racecar with torsion bars and trailing arms.

But then again, DB3S/5 began life as the personal car of David Brown, the multi-millionaire industrialist who owned Aston Martin during its heyday. The first racing action seen by DB3S/5 came as a necessity after three DB3S cars were destroyed during the 1954 Le Mans race. So yes, this singleton saw some competition.

"Few cars that have appeared in film can also boast an association with so many great names from the heyday of the British racing sports car, but this Aston Martin DB3S does just that," declared Tim Schofield, the head of the motoring department at Bonhams. "Drivers who raced it include such legends as Peter Collins, Roy Salvadori, and Sir Stirling Moss, competing at world-class level in such grueling races as the Mille Miglia, the Spa Grand Prix and the Nurburgring 1,000 KM."

DB3S/5 also starred in School for Scoundrels, a comedy from 1960 in which Terry-Thomas drives the car. Despite the wear and tear gathered over the years, the car was fully restored by the British manufacturer two years ago and it is ready to rumble. The highest bidder will get some extras aside from the car itself, including a spare engine block.