Boat shoes (also known as deck shoes) are typically canvas or leather with non-marking rubber soles designed for use on a boat. A siping pattern is cut into the soles to provide grip on a wet deck; the leather construction, along with the application of oil, is designed to repel water; and the stitching is highly durable. Boat shoes are traditionally worn without socks. 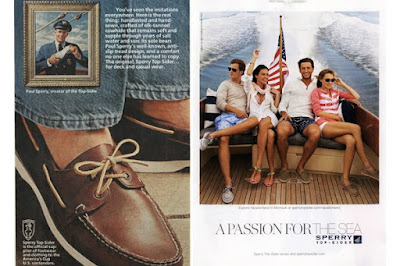 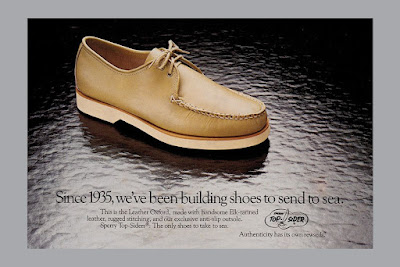 Modern boat shoes were invented in 1935 by American Paul A. Sperry of New Haven, Connecticut after noticing his dog's ability to run easily over ice without slipping. Using a knife, he cut siping into his shoes' soles, inspiring a shoe perfect for boating and a company called Sperry Top-Sider. Sperry Top-Siders are still a popular brand of boat shoe today, among many others, including Portside, Sebago and Timberland. Boat shoes are worn by both women and men. 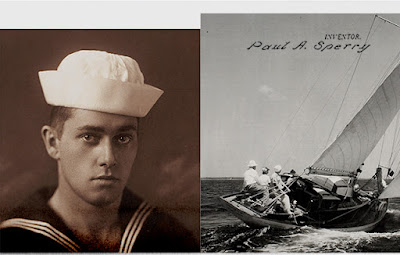 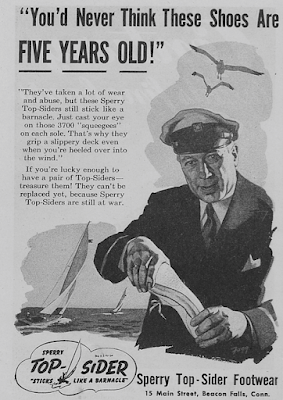 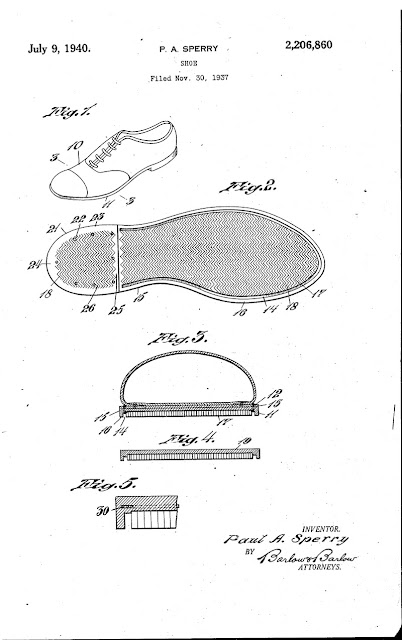 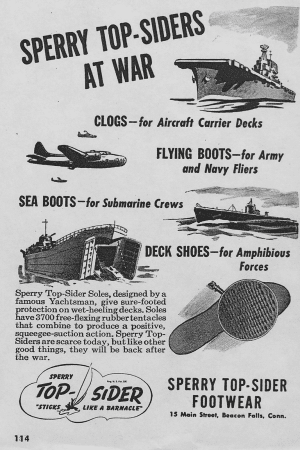 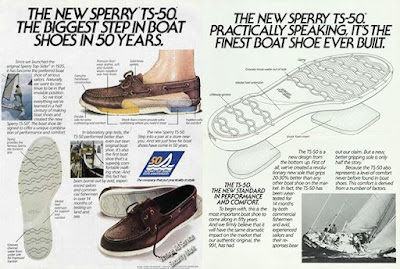 Boat shoes are used by sailors, as the name suggests; however, since the 1970s they have become casual footwear in coastal areas of the Netherlands, United States, Canada, Argentina, Australia, China, France, Italy, Portugal, Spain, and the United Kingdom. Some boat shoes today have traditional white, non-marking soles, though many others today have dark non-marking soles. They usually have a moc-toe (like a moccasin) construction. They are usually seen as somewhat of a status symbol (owning boating shoes usually denotes the owner of a boat with a deck large enough to walk around on — a moderately expensive vessel).

In the 1980s through to the early 1990s, they became a fashion trend and returned in 2007-2008 and continuing in the 2010s, as a fashion trend and were worn with every day and dress wear alike by boys, girls, men and women. The fashion was widely popular among upper elementary through middle school, high school, and college crowds in many countries.[citation needed] Besides being worn by themselves, many children and adults wear them with socks, especially low-cut, ankle socks and crew in white and many other bright neon and pastel colors. Many schools with uniform requirements allow boat shoes as acceptable uniform shoes.

In the 1980s through the early 1990s they were worn with the slouch socks trend. They were worn a lot with tight rolled/French rolled jeans to show off the slouch socks. Girls would also wear them with a crew neck or v neck sweater over a turtleneck or a crew neck top with the v neck sweater and leggings with slouch socks over them and Sebagos with many wearing their hair with a hair band or hair wrap or ponytail and scrunchie and bangs for a comfortable and fashionable look that could be worn casually every day to school, college, church, hanging out, etc. or would look just as in as a dressy casual or dressy informal wear. Sebago, Sperry Top-Siders and Eastland were the three most popular brands at the time and have remained so through the 2008 into the 2010s fashion trend revival. 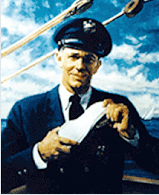 Paul Alling Sperry born in New Haven, Connecticut, the second of three sons born to Nettie Alling Sperry and Sereno Clark Sperry. His younger brother, Armstrong Wells Sperry, was a writer and illustrator of children's literature, best known for his 1941 Newbery Medal-winning book, Call It Courage. Sperry's father was a native of New Haven who served in leadership positions for several companies in the area, including the William Wells Company, the United States Finishing Company and the Pond Lily Company. His grandfather, William Wallace Sperry was a shipbuilder and served as a sergeant major in the 13th Connecticut Infantry Regiment during the American Civil War.

Sperry spent his early childhood in Stamford, Connecticut, and New York City. Accompanied by their mother, he and his brother Armstrong briefly attended school in Paris, France. Sperry received additional schooling at the Taft School in Connecticut. He spent a single freshman year at Dartmouth College in New Hampshire.

Sperry worked as a salesman and in the master mechanics office of the United States Finishing Company of New York before joining the naval reserve in 1917. He served as Office Aid for Information, Section 1, 3rd Naval District, USNRF, and was released from duty as Seaman, First Class at the end of the year. Sperry married Pauline Letitia Jacques on December 30, 1922. They shared a love of the outdoors, sailing and traveling. The Sperrys spent their honeymoon on Chincoteague Island, Virginia, hunting ducks in separate duck blinds.

An avid outdoorsman and bird hunter, Sperry designed and produced some of the first balsa wood duck decoys in the early 1920s. He started Sperry Natural Decoys, whose buyers included Abercrombie & Fitch and Kirkland Brothers. The company's sole supplier of raw materials, the American Balsa Company, raised its prices, which contributed to Sperry closing the business after fulfillment of its final orders.

In the early 1930s, Paul purchased his first boat, Gilnockie. In 1935, Gilnockie won second prize in the Vineyard Race sponsored by the Stamford Yacht Club. He bought his second boat from Nova Scotia: a schooner named Sirocco after the hot winds of the Libyan deserts. The boat was later damaged during the 1938 New England hurricane at Davis Island in Connecticut. Its replacement, the Sirocco II, arrived in New Haven in 1939. It was during these early sailing years Sperry learned that painted decks were very hazardous. He said, "I had the idea of repainting and lightly dusting with fine emery dust, but sandpaper had poor results on skin."

While sailing on the Long Island Sound, Sperry slipped on the deck and fell overboard. He was able to pull himself back on board, but the experience drove him to develop a non-slip shoe. While experimenting with possibilities for non-slip shoes, he noticed his dogs' ability to run down the icy hill without slipping. The grooves on their paws inspired him to try cutting grooved patterns (siping) in a natural rubber sole.

Sperry tried various patterns of siping and settled on a herringbone pattern as the most effective. He cemented the prototype soles to a pair of canvas sneakers and gave them to Leon Burkowski, the young man who looked after his boat. When Sperry and his wife returned, "Leon immediately threw a bucket of water on the deck and yelled, 'watch.'" He took a running start and stopped dead in his tracks. This was the invention of the first pair of Sperry Top-Siders.

In 1937, Sperry applied for a United States patent for his non-skid sole. He first offered the patent to the United States Rubber Company of Connecticut. The company turned him down because the sole would cost $4.50, when an expensive shoe at the time cost $3.75. Sperry then offered the patent to Converse Rubber Company in Boston, Massachusetts, which agreed to make blank rubber soles and ship them to Sperry for siping and then assemble the finished shoes and return them to Sperry for sale. Sperry developed a machine for cutting the non-skid design into the soles and launched the project working in his spare hours while employed full-time at the Pond Lily Company.

A friend, Donald White, who worked as an advertising salesman for McGraw-Hill, suggested Sperry sell directly by mail and helped him compose a letter to send to all 500 of Sperry's fellow members of the Cruising Club of America. Sperry received responses and requests for shoes from all 500 members. Confident that he had a winning product, he started a mail order business, while also selling the shoes through the Commonwealth Shoe & Leather Company in Boston and a small direct mail catalog.

In the later 1930s, Sperry continued work on developing a more durable and functional boat shoe. He worked with the United States Rubber Company, which developed a rubber compound for traction and wear that could be more easily siped, and with the Commonwealth Shoe & Leather Company on a new leather shoe design made with specially tanned leather. Sperry's new design had a unique "saddle" through which rawhide laces were pulled—the now-familiar Sperry Authentic Original boat shoe.

Sperry was interested in photography from an early age. His black and white photographs of Cannon Mountain in New Hampshire from 1938 to 1940 were donated by the Sperry Family to the New England Ski Museum in 2007. In 1950, Sperry founded Sirocco Screenprinters in North Haven, Connecticut and served as its president until his death. The company made screenprints of artwork by Josef Albers, Robert Indiana, Roy Lichtenstein, and others, which can be viewed on the websites of the Museum of Modern Art in New York City and the Art Institute of Chicago.

Sperry was named corporate secretary of the Pond Lily Company in 1941 and president and director of the Guider Specialty Company in 1955. He held both positions until the late 1970s. He also served as a director of the Echlin Manufacturing Company and president and treasurer of the Sperry Real Estate Corporation. Sperry died on November 7, 1982, in New Haven, Connecticut, at the age of 86.