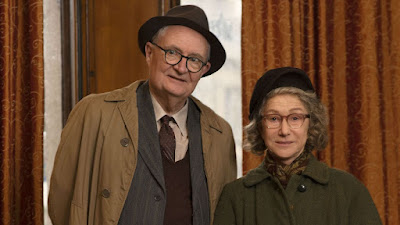 The Duke review – art thief takes one for the common man

All rise for The Duke, a scrappy underdog yarn that makes a powerful case for the rackety English amateur, the common man who survives by his wits with the odds stacked against him. Kempton Bunton of Byker, for instance, is about as far removed from the Duke of Wellington as a frog is from a prince. But now the Duke is trapped behind the wardrobe in Kempton’s tatty back bedroom, which is one in the eye for the British class system and means that Kempton is sitting pretty, at least for a while.

Roger Michell’s delightful true-crime caper comes bolstered by a terrific lead performance from Jim Broadbent, rattling about the red-brick terraces of early 1960s Newcastle. His Kempton Bunton is a wannabe playwright and soapbox revolutionary, a man who prefers Chekhov to Shakespeare because he feels that the Bard wrote too many plays about kings. By night he’s sitting up in bed reading books by George Orwell. By day he’s tilting at windmills, squabbling with shop-floor managers and getting under the feet of his pinched, knackered wife. As played by Helen Mirren, Dorothy Bunton is constantly cleaning up the mess left by her husband and her two adult sons. She says: “Be sure to use the coasters. You’re not in Leeds now.”

The city of Leeds may be bad in its way, but the real problem is London; it’s taken leave of its senses. Down at the National Gallery, they’ve just spent £140,000 of public money to secure Francisco Goya’s portrait of Arthur Wellesley, the Duke of Wellington. “An outstanding example of late-period Goya,” sighs the curator. “Some half-baked portrait by a Spanish drunk,” says Kempton. He argues that the cash would have been better spent providing free TV licences for all the UK’s old age pensioners. Kempton, perhaps relatedly, has recently served a brief prison term for not paying his own TV licence.

Michell and Broadbent previously worked together on 2013’s excellent Le Week-End, in which the actor played a middle-aged professor in meltdown, drunkenly singing along to Bob Dylan inside a poky Paris hotel. The Duke (scripted by Richard Bean and the BBC’s Clive Coleman) is a more obviously crowd-pleasing affair, precision-tooled but big-hearted. Michell does well in capturing a 60s north-east of belching chimney-stacks and rag-and-bone men; a limbo-land Britain, caught between the end of rationing and the birth of the Beatles. Kempton, one suspects, has both boots in the old world - but he can still dream of tomorrow.

What a lovely, rousing, finally moving film this is. The Duke is unashamedly sentimental and resolutely old-fashioned in the best sense of the term: a design classic built along the same lines as That Sinking Feeling, A Private Function or 50s Ealing comedies. In an earlier era, the role of Kempton would have been played by Denholm Elliott or Alastair Sim.

Hauled into court to account for the theft, Kempton is finally given the stage he’s been craving all his life. The man is an upstart, a liar, undeniably a crook. But he’s also an idealist, a committed socialist, and it is this side of Kempton that now comes to the fore. He teases the judge, jokes with the jury and explains that he puts his faith “not in God, but in people”. Meanwhile, up in the public gallery, sit his own band of people. The posh young woman who employs his wife as a cleaner. The exploited co-worker whom he once tried to defend. Individually, in Kempton’s view, these people are all just single bricks. But put them together and you make a house. Put them together and you build Jerusalem.