HER MAJESTY'S BODYGUARD OF THE HONOURABLE CORPS OF GENTLEMEN AT ARMS


Formation
The corps was formed as the Troop of Gentlemen in 1509 by King Henry VIII to act as a mounted escort, armed with spear and lance to protect the sovereign, in battle or elsewhere. Henry decided to have "this new and sumptuous Troop of Gentlemen composed of cadets of noble families and the highest order of gentry as his personal Body Guard or "Nearest Guard"".

As his Body Guard it accompanied Henry to France in 1513 and took part in the Battle of Guinegate (better known as the Battle of the Spurs) and then at the Field of Cloth of Gold in 1520. In 1526, they became a dismounted bodyguard armed with battleaxes. They last saw service in battle during the English Civil War (during which a Gentleman Matthews saved the Prince of Wales at the Battle of Edgehill (1642) from one of the Earl of Essex's troopers). They were always intended as a primarily ceremonial unit, but were on regular duty until the 19th century.

Under Henry VIII the Troop of Gentlemen varied in size, according to funding available. As the "Nearest Guard" to the Monarch the unit attracted an aristocratic and aspiring membership, which could be utililsed as a cadre of young officers when levies were raised for overseas service[1].

Duties
Today, the duties are purely ceremonial - the Gentlemen attend the Sovereign at various ceremonies, including state visits by Heads of State, the State Opening of Parliament and the ceremonies of the various orders of chivalry, including the Order of the Garter. The Gentlemen now parade for the State Opening of Parliament, state visits, Royal Garden Parties, the Garter service, Diplomatic Corps receptions, royal weddings, coronations, the Investiture of the Prince of Wales, and lying in state. They also have three mess dinners annually.

Officers and administration
The Corps today consists of five Officers (the Captain, the Lieutenant, the Standard Bearer, the Clerk of the Cheque and Adjutant and the Harbinger) and 27 Gentlemen. The senior Officer is the Captain, a political appointee who is now always the Government Chief Whip in the House of Lords. The senior permanent officer is the Lieutenant. The Clerk of the Cheque and Adjutant issues all orders to the Corps. The Harbinger runs the Mess and assists the Clerk. The Mess, at St. James's Palace, is run by a permanent Axekeeper and Butler also assisted by The house keeper. All Officers (except the Captain) must have served in the Corps prior to promotion to officer rank. In the 1600s there was also the office of Paymaster of the Honourable Corps of Gentlemen at Arms and Co-Paymaster of the Honourable Corps of Gentlemen at Arms.

Membership and age limits
All subordinate officers, and all Gentlemen, must be under the age of 55 years on joining, and are on average 52. The Gentlemen retain their prior military ranks (currently most rank between major and colonel). They must retire at 70 years, thus giving an average age of approximately 61 years.

Although all Gentlemen are retired officers, uniquely one recent member was also a clergyman. Colonel the Reverend Richard ("Dick") H. Whittington, MBE joined the Corps in 1999 after retiring from the Corps of Royal Engineers. He had been ordained a deacon in 1993 and a priest in 1994. He was Chaplain of the Royal Hospital Chelsea.

Uniform
The uniform is that of a Dragoon Guards officer of the 1840s. It has a skirted red coat with Garter blue velvet cuffs and facings embroidered with the Tudor royal badge of the portcullis. Helmets with white swan feather plumes are worn when on duty, even in church. Officers wear, in addition, gold aiguillettes, and carry sticks of office - gold for the Captain, silver for the Lieutenant, Standard Bearer and Clerk of the Cheque, and ivory for the Harbinger - which they receive from the Sovereign on appointment. Cavalry swords are worn, and long ceremonial battle-axes, over 300 years old, are carried by all the Gentlemen.

Standard
The corps' carries a standard, similar to that carried by cavalry and infantry regiments of the British Army, upon which is mounted the corps' various accoutrements and a selection of its battle honours. In the case of the Gentlemen at Arms, this is a swallowtailed standard of crimson edged in gold. The cross of St George is at the hoist. Next to this is the royal cipher of the reigning monarch, with the name of the corps ("Gentlemen at Arms") put diagonally from top to bottom. Between the two pieces of text is the corps' portcullis badge, while at the end of the standard are a selection of battle honours.[2] In 2009, at a celebration of the Corps' 500 years of personal service to the Sovereign, HM The Queen presented a special riband to be displayed on the Standard.[3] 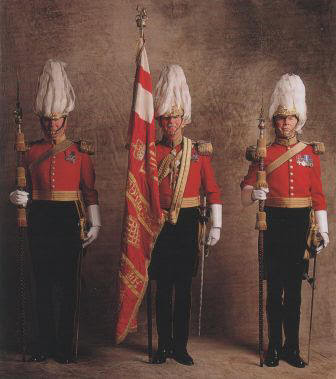 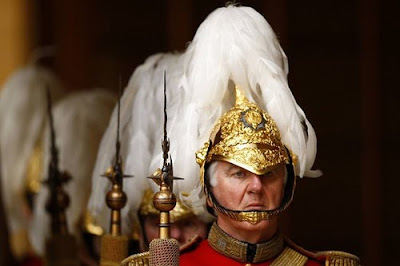 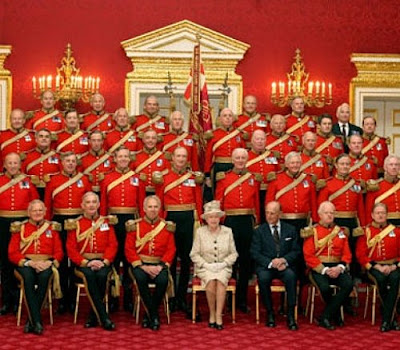