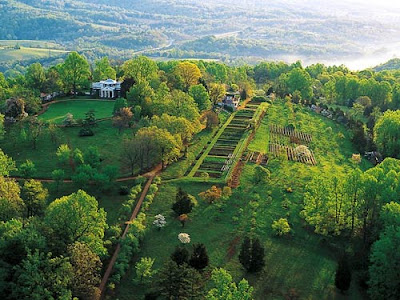 The house, which Jefferson himself designed, was based on the neoclassical principles described in the books of the Italian Renaissance architect Andrea Palladio. It is situated on the summit of an 850-foot (260 m)-high peak in the Southwest Mountains south of the Rivanna Gap. Its name comes from the Italian "little mountain." 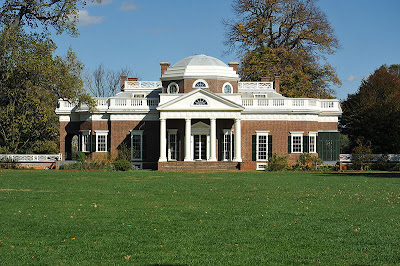 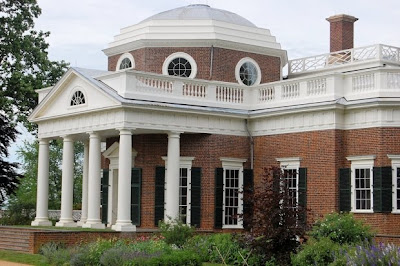 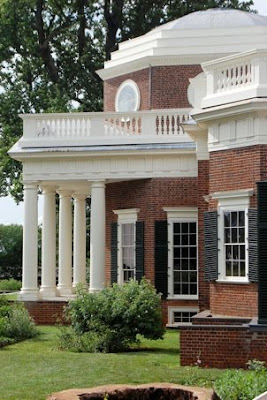 Work began on what historians would subsequently refer to as "the first Monticello" in 1768. Jefferson moved into the South Pavilion (an outbuilding) in 1770. Jefferson left Monticello in 1784 to serve as Minister of the United States to France. During his tenure in Europe, he had an opportunity to see some of the classical buildings with which he had become acquainted from his reading, as well as to discover the "modern" trends in French duds that were then fashionable in Paris. His decision to remodel his own home may date from this period. In 1794, following his service as the first U.S. Secretary of State (1790–93), Jefferson began rebuilding his house based on the ideas he had acquired in Europe. The remodeling continued throughout most of his presidency (1801–09).

Thomas Jefferson added a center hallway and a parallel set of rooms to the structure, more than doubling its area. He removed the second full-height story from the original house and replaced it with a mezzanine bedroom floor. The most dramatic element of the new design was an octagonal dome, which he placed above the West front of the building in place of a second-story portico. The room inside the dome was described by a visitor as "a noble and beautiful apartment," but it was rarely used—perhaps because it was hot in summer and cold in winter, or because it could only be reached by climbing a steep and very narrow flight of stairs. The dome room has now been restored to its appearance during Jefferson's lifetime, with "Mars yellow" walls and a painted a blue floor.[4]

Thomas Jefferson died on July 4, 1826, and Monticello was inherited by his eldest daughter Martha Jefferson Randolph. Financial difficulties led to Martha selling Monticello to James T. Barclay, a local apothecary, in 1831. Barclay sold it in 1834 to Uriah P. Levy, the first Jewish American to serve an entire career as a commissioned officer in the United States Navy. Levy greatly admired Jefferson. During the American Civil War, the house was seized by the Confederate government and sold, though Uriah Levy's estate recovered it after the war.

Lawsuits filed by Levy's heirs were settled in 1879, when Uriah Levy's nephew, Jefferson Monroe Levy, a prominent New York lawyer, real estate and stock speculator and member of Congress, bought out the other heirs and took control of the property. Jefferson Levy, like his uncle, repaired, restored and preserved Monticello, which was deteriorating seriously while the lawsuits wended their way through the courts in New York and Virginia.


Monticello and its reflectionA private non-profit organization, the Thomas Jefferson Foundation, purchased the house from Jefferson Levy in 1923 with funds raised by Theodore Fred Kuper and it was restored by architects including Fiske Kimball and Milton L. Grigg.[5] Monticello is now operated as a museum and educational institution. Visitors can view rooms in the cellar and ground floor, but the second and third floors are not open to the general public due to fire code restrictions. Visitors can, however, tour the third floor (Dome), while on a Signature Tour.[6]

Monticello is the only private home in the United States that has been designated a World Heritage Site. From 1989 to 1992, a team of architects from the Historic American Buildings Survey (HABS) painstakingly created a collection of measured drawings of Monticello. These drawings are now kept at the Library of Congress. The World Heritage Site designation also includes the original grounds of Jefferson's University of Virginia.

Among Jefferson's other designs are his other home near Lynchburg called Poplar Forest and the Virginia State Capitol in Richmond.

Much of Monticello's interior decoration reflect the ideas and ideals of Jefferson himself.[7]

The original main entrance is through the portico on the east front. The ceiling of this portico incorporates a wind plate connected to a weather vane, showing the direction of the wind. A large clock face on the external east-facing wall has only an hour hand since Jefferson thought this was accurate enough for outdoor laborers.[8] The clock reflects the time shown on the "Great Clock", designed by Jefferson, in the entrance hall. The entrance hall contains recreations of items collected by Lewis and Clark on their famous expedition. The floorcloth here is painted a "true grass green" upon the recommendation of artist Gilbert Stuart in order for Jefferson's 'essay in architecture' to invite the spirit of the outdoors into the house.

The south wing includes Jefferson's private suite of rooms. The library holds many books in Jefferson's third library collection. His first library was burned in a plantation fire, and he 'ceded' (or sold) his second library in 1815 to the United States Congress to replace the books lost when the British burned the Capitol in 1814.[9] This second library formed the nucleus of the Library of Congress.[9] As famous and "larger than life" as Monticello seems, the house itself has approximately 11,000 square feet (1,000 m2) of living space.[10] Jefferson considered much furniture to be a waste of space, so the dining room table was erected only at mealtimes, and beds were built into alcoves cut into thick walls that contain storage space. Jefferson's bed opens to two sides: to his cabinet (study) and to his bedroom (dressing room).[11]


In a time before refrigeration, Jefferson stocked this pond with fish, available on demand.The west front (illustration) gives the impression of a villa of very modest proportions, with a lower floor disguised in the hillside.

The north wing includes the dining room—which has a dumbwaiter incorporated into the fireplace as well as dumbwaiters (shelved tables on castors) and a pivoting serving door with shelves—and two guest bedrooms.(wikipedia) 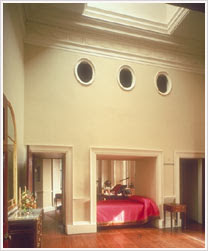 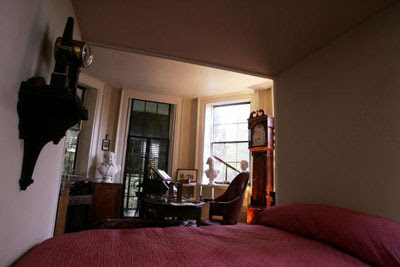 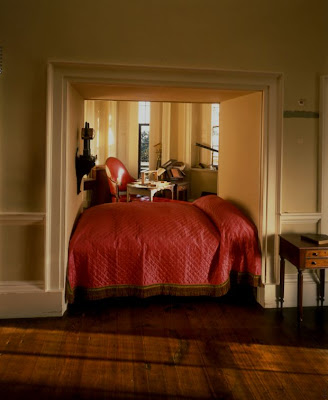 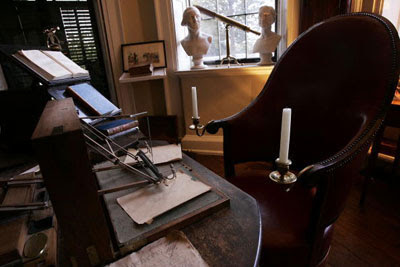 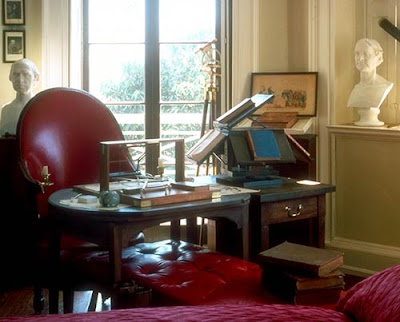 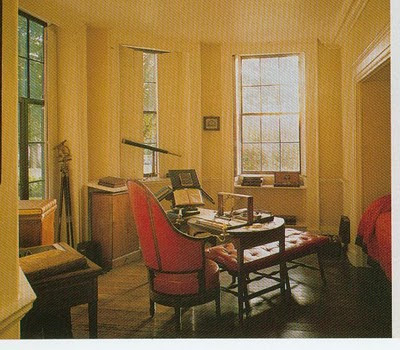 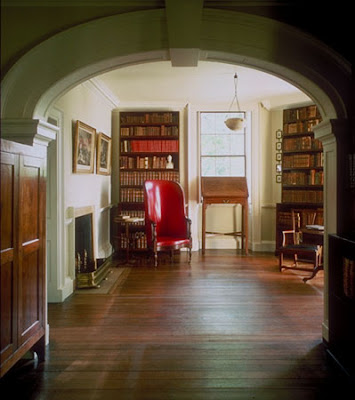 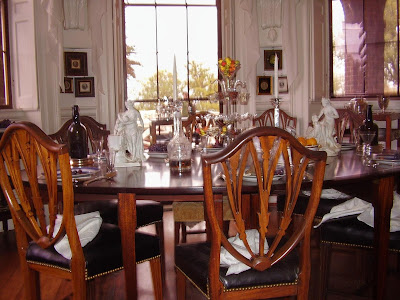 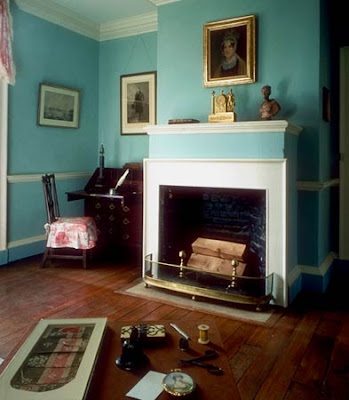 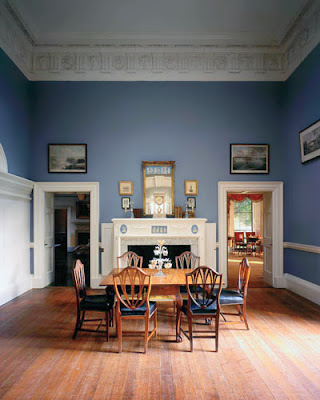 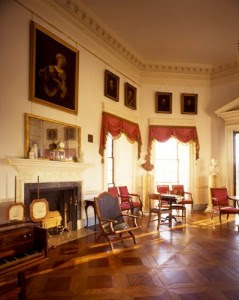 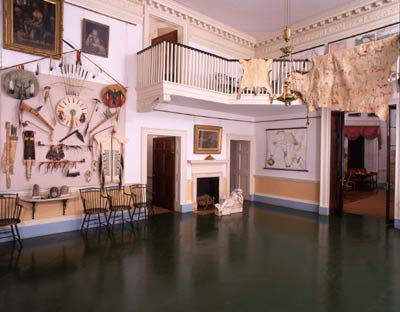 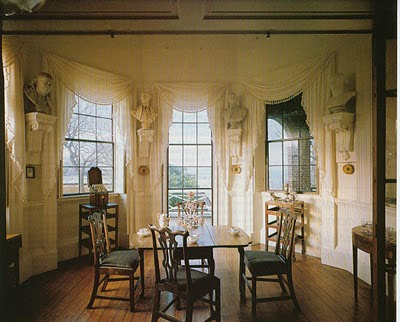 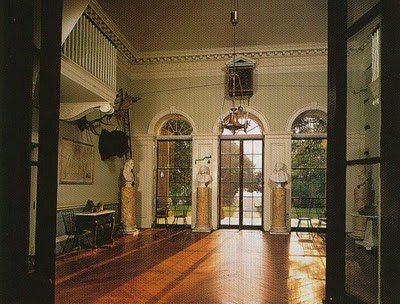 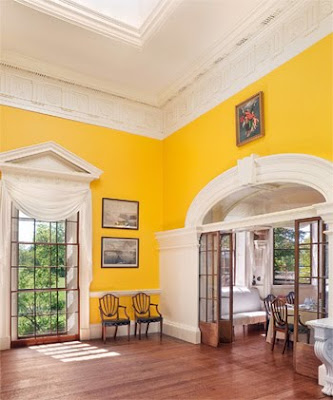 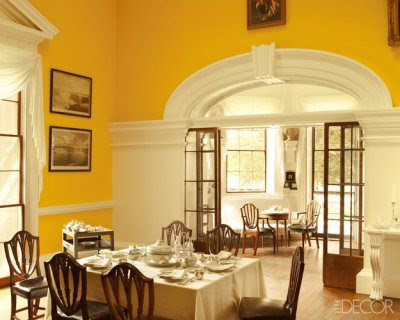 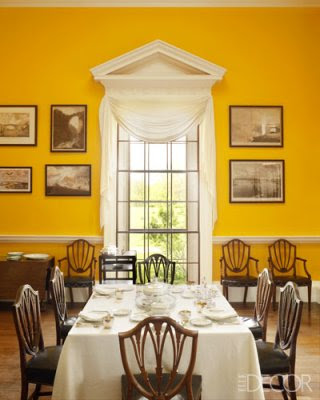 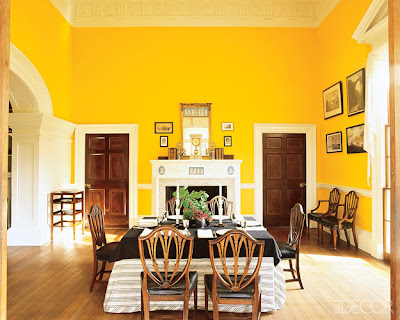