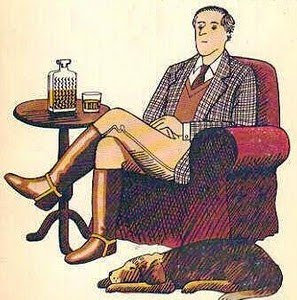 The English Gentleman (1978) is a humorous book written by Douglas Sutherland and illustrated by Timothy Jacques, with an introduction by Sir Iain Moncreiffe of that Ilk. The book acts as a satirical guide to the life of an English gentleman in various contexts, featuring such chapters as "The Gentleman at Play," "The Gentleman at War," and "The Gentleman and the Opposite Sex."
The foreword for The English Gentleman states,
“ Ever since the nineteenth century and long before that for all I know, there has been a regular stream of little books designed to help those who desire to be part of the upper classes. In the past these books have been written by men and women, largely for women, and concerned with such profundities as how to address a Duke or an Archbishop, or what to do with your fingerbowl. It has always been assumed that the most desirable position in the world is to be accepted as a lady or gentleman. It was assumed by many from Jane Austen to Daphne du Maurier that it is the surest way to happiness and possibly even to eternal salvation. This book, I hope, is different in that it is the first one to be written by a man, almost exclusively for men. It examines what makes or breaks the gentleman and leaves it to the reader to decide whether he wishes to be part of the upper classes or not. It is also hoped that this volume will be helpful to ladies who wish to be able to recognize the gentleman when they meet one, and to let them know what they are in for should they be reckless enough to marry one. — D.S. 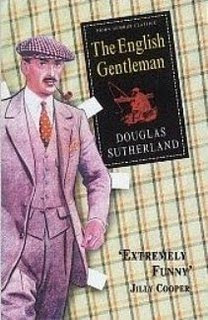 Originally written for Debrett's Peerage and now something of a classic, Douglas Sutherland's guide to that endangered species, the English Gentleman, was originally written as an antidote to all the endless, dull little books on manners and etiquette: the kind read by those who long to be recognised as part of the real gentry by the way they use their finger-bowl or address an Archbishop. Both genuinely informative and yet very funny in its self-deprecating tone, The English Gentleman offers a window to the parvenu on the rather perverse world of the genuine article. It describes his habits: where he might live, what he might wear, his school, his clubs, his hobbies and sports, his family and relationships, his behaviour when abroad, his mode of speech and the acceptable way to behave in almost any given situation (invariably the very opposite of what the outsider might think). Not to mention advice on the correct attitude to have toward money (it is vulgar), sex (it is vulgar) and business (it is vulgar unless, of course, it is run at a heavy loss). It all adds up to an unmissable initiation into the eccentric social history of the stiff upper lip. A hilarious and insightful look at the real life counterparts to the sort of squires found in the fiction of Nancy Mitford, PG Wodehouse and Compton Mackenzie. Proving that truth is often stranger than fiction.
Publicada por Jeeves em 14:28