Edward Sexton, the Savile Row Taylor who wanted a Revolution

Edward Sexton is a bespoke tailor, who began his career at the age of 16 with an apprenticeship at Kilgour French and Stanbury. Today he trades out of his studio on Beauchamp Place, in Knightsbridge.

On February 14, 1969 Edward Sexton and Tommy Nutter opened Nutters of Savile Row with the backing of Cilla Black and Peter Brown after having worked together at Donaldosn Williams and G Ward. While Nutter was the creative and focus of the front of house, Sexton was a traditional bespoke master cutter. In 1976 Sexton bought Nutters of Savile Row, and was Managing Director until 1983 when he started trading as Edward Sexton.


In 2001 Stella McCartney undertook an apprenticeship with him, where they designed and made all the pieces for her first catwalk show in Paris for Chloé.

In 2008 Sexton took Petra Ecclestone under his wing to help her develop Form Clothing.

Petra Ecclestone, 19, is the daughter of the Formula One supremo Bernie. This autumn she launched her first menswear collection, Form, inspired by the motor-racing world. She lives in London with her three dogs

Edward has made my father's suits for more than 30 years. As my dad got busier, he started coming to our house for the fittings. After he'd seen my dad he'd come down to the kitchen and my mother would have a drink or some supper waiting for him. My first memory of Edward is sitting at the kitchen table with him as he helped me with my maths homework. Not surprisingly, he was pretty good at it.

To me, Edward has always been exactly what you would imagine the classic Savile Row tailor to be. He is an old-school gentleman, incredibly sharp and well-groomed. He reminds me a lot of my dad – they are both self-made, hard-working men who grew up in a time when there were more important things to do than slouch in front of the TV. I'm a feminist, but I like men with old-fashioned manners, and Edward wouldn't dream of not opening a door or pulling out a chair for a woman.

When I came to design my own menswear collection I realised I needed some expert advice, so I asked my dad and he took me to see Edward to ask his opinion about my work. In the fashion world there are a lot of people who'll tell you something is great to your face, but say the opposite behind your back. People often say what they think I want to hear but Edward doesn't – he can be a harsh critic, but that's because he believes in me.

It's nice to have the support of someone in the business who really knows what they are talking about, as there are a lot of people who just think of me as Bernie Ecclestone's daughter and presume I must be making tacky dresses.

Edward is a perfectionist. From the way he dresses to his work to his garden. It's all immaculate. On one of our work trips to Italy he had his bag searched at the airport and they confiscated his toiletry bag. I had to laugh – I think he had more grooming products with him than I did.

I never notice our age gap, partially because I think I am an old soul in a young woman's body, but also because Edward has so much energy. He's up before six working every day. I don't think of him as old, although I do find it funny when he sends me text messages: they are full of misspellings and misplaced punctuation. I can just see him putting on his reading glasses and peering at his ancient mobile phone for about half an hour to send one.

It can be intimidating starting out on your own. I never studied fashion or went to art school; I just knew I loved sketching and designing. Edward is an inspiration as he didn't do all that either; he just worked his way up. I have the greatest respect for him. He's given me the benefit of his experience, which money can't buy.

Edward Sexton, 60, is a men's tailor who has dressed Mick Jagger, Eric Clapton and Jack Nicholson, and mentored Stella McCartney. In 1969 he co-founded the famous Savile Row tailors Nutters. He lives in west London with his wife

Petra's father is one of my longest-standing clients. As a rule, I don't socialise with my customers – that's not what you do as a tailor – but it is hard not to cross that line when you've known someone for years. People do become your friends. I'd go to the house and Mr Ecclestone might not be there yet, so I'd sit in the kitchen and have a cup of tea and a chat to his wife while Petra and the other kids ran around.

Petra was always a very normal child, very reserved and very well-brought up. You imagine a girl from such a rich family might be a bit spoilt or precocious but she was quite the opposite. You can tell she had a grounded childhood from the low-key person she has become. She's not out running around town socialising every night. She looks like a glamour puss, but she doesn't flaunt it.

I don't think you can talk about Petra without talking about Bernie, because she is very much her father's daughter. Bernie has always had his own sense of style and I can see that has had an effect on Petra's ideas about menswear. When she decided she wanted to be a designer, Bernie called me and asked if I'd take a look at her ideas. I was gobsmacked when I saw her sketches – they were unique.

She is a natural businesswoman – another thing I'm sure has rubbed off from her dad. We go on a lot of trips to factories in Italy to source materials, and it's funny to watch people's reactions to her. Men see this beautiful blonde girl and imagine she must be a naïve young thing, but she's a real grafter and she expects the same of people around her. That's not to say she isn't sensitive or kind. When I was unwell a while back she phoned my wife all the time to see how I was doing.

People want to dismiss girls who come from privileged backgrounds, but they are going to have a hard job with Petra. She's been a good student, but she's not a pushover and she'll stand her ground when she thinks something is right.

Bernie is obviously very proud of Petra, and so he should be. But I know it won't be until the day she shows him a good balance sheet that he'll be really impressed.

Cutting a relaxed dash in a harmonious camel blend of check weekend jacket with cashmere knit, I meet Mr Sexton in his workshop in Beauchamp Place, Knightsbridge. His hair is brilliant and I am envious. He’s a proper smoothy but in no way uptight or fussy. I begin to discover what went into this crucial style equation.

Sexton was driven and committed to the craft from the off. While training as a tailor in the East End, he heard talk of the vaunted Savile Row and reasoned he should learn from the best. He honed his craft at various gaffs, including the esteemed house of Kilgour French and Stanbury. He attended the London College of Fashion in the evenings. Around this time Sexton met salesman Tommy Nutter and the two became close pals, drinking and scheming together socially. Sexton was moonlighting working on private freelance jobs at the time. He explains that this as when you develop as a tailor: “it shows you have real determination and you start to understand your own style. You develop business sense too because its your own money!” Nutter saw this, which is why he was keen to join Sexton when he had the chance to open his own place on the Row.

“I thought let’s go and get it,” says Sexton, explaining that Nutter was the front man and he was the technician. “Tommy would give me matchstick men drawings, and I would produce the suits. We developed this whole new look. We brought fashion to the Row,” he adds. “First of all, we had window displays. They all just had curtains then, you wouldn’t know what the hell went on. They had their one style and that was it. Bespoke means the client ‘be-spokes’ what they want, so we loosened it up,” he explains.

Edward’s dedication and passion for his work also made a vast difference. “All those old bastards down there said they’d give us six months. What they didn’t realise was although we were doing this fabulous style; we always put in the true traditions of the handcraft, and then improved upon it. We went back in time and put more work in,” he says.

Meanwhile they embraced the burgeoning hip cultural scene of the late Sixties. The opening party of ‘Nutters’ on Valentines’ Day 1969 was attended by numerous aristoes, tycoons such as Kerry Packer and Rupert Murdoch, but more importantly by the likes of Paul McCartney, Mick and Bianca Jagger, Twiggy and photographer Justin de Villeneuve.

The look that had the ‘it crowd’ swooning about and dying to get in the Sexton’s gear remains very similar today. Strong, elegant sculptured shoulders with plunging, generous lapels. Confident finishing and verve teamed with classic luxurious fabrics, delivering high impact, refined style.

People who come to Edward Sexton know what look to expect. He engages in conversation once he’s got the initial jacket shapes on a client. He’s quick to tell me he builds a suit, he doesn’t make it. “My foundations are my signature, you’ll feel it,” he tells me, “All this other stuff, the collars and what have you, these things are trends we can change. I like natural elegance. I like to set a trend, not follow one.” While I’m admiring an unusual shirt with almost closed collar and tiepin Sexton tells me, “That’s the signature collar that I wear. Unless you romance a suit it doesn’t pop. I always wear pin or tab, from the thirties. That epitomises our clothing, like the music on the website, ‘Room With a View’. It completes my look.”

Sextons’ style as been sort out by American style luminaries, including Bill Blass and Kasper. The British fashion and style crowd are also locked into it. “Sir Hardy Amies, Bruce Oldfield, Stella McCartney (who I trained), I dressed Paul, Mick Jagger.” His PR prompts him that he just cut for Pete Doherty, and for John Taylor. “I forget the names you see, I’m so into my work. I don’t care who you are, I’ve got a job to do, I’m not impressed or star struck. Yeah, I’ve done Bowie,” he adds.

How many fittings might one expect? “The more fittings you have, it invariably means the person making your suit is in trouble. Measurements, that’s what it’s all about, then a base, then a forward and finish. Two or three fittings. I’m yet to make a finished suit where I, not the customer, don’t want to tweak it. When you take delivery of suit I say wear it a few times, and then bring it back for its ‘first service’, once you’ve moulded into it a bit. Then it really becomes your suit. My label’s in that garment. It’s got to be right,” Edward says with more than a light emphasis.

He’s very buoyant about his work, and is proud of what he’s achieved. I have to agree with him when he proclaims this tailoring edict with a smile: “When you’ve been to Savile Row and you’ve been disappointed, where do you go from there? Come and see me and you’ll get the real deal.” 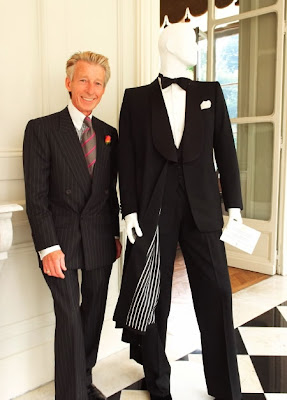