The Sartorialist. Scott Schuman the man behind the "blog" 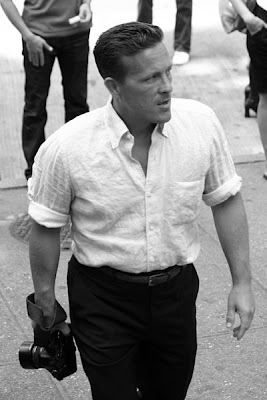 Scott Schuman is the creator of the popular fashion blog "The Sartorialist". After leaving his position as director of men's fashion at his showroom to take care of his daughter in September 2005, he began carrying a digital camera around and photographing people he saw on the street whose style he found striking. He then posted these to his blog, sometimes with short comments, always either favorable or open-minded. He is well known for photographing what have been described as 'real people.
"The Sartorialist" quickly became a regular read for fashionistas, both on the street and in the upper echelons of the industry. Schuman was hired to do similar coverage for Condé Nast's style.com, and has covered shows during New York's Fashion Week for Saks Fifth Avenue. He has since been replaced by Tommy Ton of the blog JakandJil In 2007, he was named one of AskMen.com's Top 49 Men of the year. In 2008, Schumann appeared as a model in Gap's fall campaign. Schumann contributed portraits to Burberry's "Art of the Trench" marketing campaign.
A native of Indiana, Schuman once worked as a sales associate at the popular 1980s chain Chess King. Later he attended Indiana University, graduating with a degree in apparel merchandising and a minor in costume construction.
Publicada por Jeeves em 00:25