A huge thank you to everyone for making the London Tweed Run 2011 such a roaring success! We’ll be back with another London ride in the autumn.
I offer you now some films that testify the incredible pleasant and good humorous atmosphere of this London event for all the Tweed Chaps and Chapettes including the small ones ...
In the next post I will publish more images ... yours Jeeves 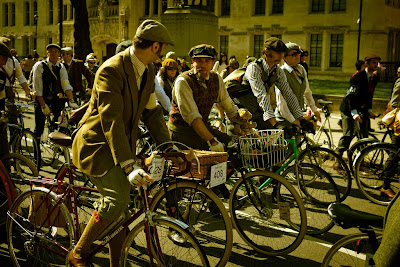 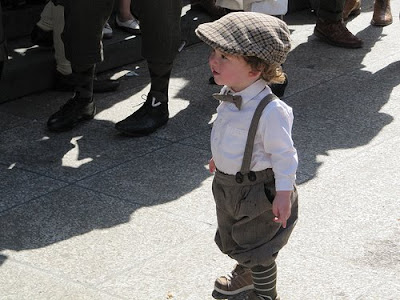 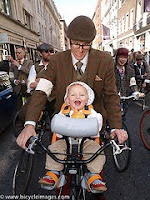 So went an exchange overheard halfway through the 3rd annual Tweed Run, which saw Old Street roundabout turned into what one Tweeter described as “an Edwardian Beijing” on Saturday afternoon. The perfect weather no doubt helped, as the organisers couldn’t have hoped for a better day to break out the plus fours.
It was a case of two wheels good, two legs bad. Although four legs were not excluded, and one competitor was literally (tweed) running before he could walk. There was even a Jedi master in our midst.
Keith, whose group kindly adopted us is a sterling example of the gentlemanly spirit that the ride promotes. Barely a pedestrian went by without a wave or doff of his bowler hat. It was like being a celebrity for the day as folks stopped (not that they had much choice — there were 600 of us, tweed and cycles sweeping through the streets as far as the eye could see) to point and take photos as we passed. The numerous high wheelers (penny farthings) received the bulk of the admiration. Keeping it Londony, several Cycle Hire bikes also joined the predominantly vintage contingent. The scheme proved especially useful for Bruno, who — having built a bike from scratch especially for the event — saw his steed fall apart beneath him as we pedaled our way up Regent’s Street, and only Boris could come to his rescue.
A stop at Lincoln’s Inn Fields meant time for a spot of tea and cucumber sandwiches, much to the confusion of a wedding party who probably didn’t expect their wedding photos to include a 600 strong dapper peleton. Tweed certainly seems to bring out the most gentlemanly conduct. The highest levels of courtesy were evident throughout and even when offered the opportunity to skip the tea queue, most passed, choosing to wait their turn regardless. Then it was onto the finishing post at Bethnal Green Working Men’s club where well deserved ginger cocktails were quaffed in the sun and plans made for next year’s attire.
The ride was free, save for a donation to Bikes4Africa, a programme which gives African children bicycles to enable them to bike to school, and also provides maintenance skills, tools and workshops. Talking to a representative of the charity later at the social club, it seems getting hold of the bikes isn’t the problem, but rather transporting them out to Africa. The funds raised from this year’s Tweed Run will send an entire shipping container’s-worth over.
Hats off to organisers Ted and Jacqui, as well as the valiant marshals who did a fine job blocking junctions and rebuffing taxi drivers’ heckles so that we could pass unheeded. All in all a spiffing day!
If you missed out despair not — the next even will be held in November, the Chap Olympiad comes to Bedford Square on 16 July, or you could just commute through Shoreditch in the morning…
By Ruth Lang and John Wilkes
Publicada por Jeeves em 00:01